What direction do you suppose the drivers in the green Kia and dark plum taxi above are looking (and encouraged to look based on road design)?

I’m fairly confident that their attention was focused solely to their left, not straight ahead or to the right. They are looking, not for people in the crossing, but for a gap in traffic so that they can gun it and get on their way. This based on them lurching forward and then slamming on their brakes when they, very fortunately, apparently finally saw the bicycle rider (who did have a white crossing signal).

What if one of them hadn’t noticed her? Or had noticed her one second later?

Right On Red appears to be about the 5th highest cause of deaths and injuries of pedestrians in Minnesota behind overtaking hits, hit from behind (for instance, someone being hit while walking on a shoulder), car turning left, and car turning right (e.g., no traffic light). The table below is taken from the Minnesota Department of Public Safety’s Minnesota Motor Vehicle Crash Facts from 2015. 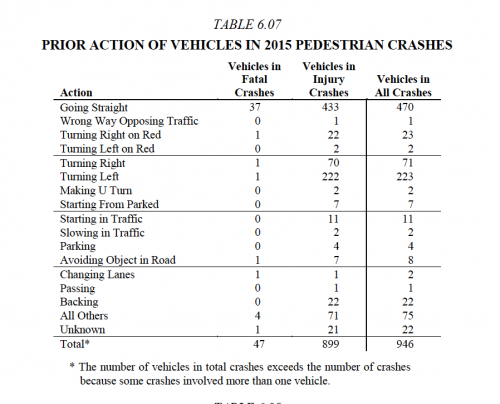 In 2015, of 47 pedestrian deaths and 899 injuries, 1 death and 22 injuries were reported as related to the offending driver turning right on red. At least 3 of the 22 right-on-red injuries resulted in permanent disabilities.

No data on prior action of the driver is provided for bicycle fatalities and injuries though failure to yield right-of-way by the vehicle driver accounts for 31% of the 10 bicycle deaths and 873 injuries followed by driver inattention accounting for 16%.

Does right-on-red contribute to more deaths and injuries than those attributed in police reports? Likely. Some of the ‘unknown’, ‘all others’ and various other categories likely involved someone turning right on red without paying proper attention. Police have told me that accuracy in crash reports leaves a lot to be desired.

There’s one more important bit though where right-on-red may contribute more than indicated.

Everything about US roads and driving says to go quickly and get where you’re going in a hurry and as fast as possible. US road designs scream to drivers that they are the most important and have priority over all others. US traffic engineers focus on making sure that vehicle speeds are high and delays minimal. There are even wide sweeping turns at junctions so that drivers need not even slow very much when not stopping before turning right on red. When we plan a trip in the US we often plan for the most optimistic time and then drive quickly and without our full attention to get where we’re going in the tight time that we allocated.

Driving in Europe is rather different. Safety plays a massively greater role in road design. There is no right-on-red so you stop at traffic lights more often (signal cycles are also considerably shorter). Speeds are much lower on any roads where people walking or riding bicycles may be present. This not just because of the posted speed limit but also narrower lanes, much tighter turn radiuses at junctions, and cement curbs and bollards directly adjacent to the road that encourage people to drive slower and pay much better attention. As I’ve said many times, cement enforces better than paint or paper. Except on motorways, driving is often a much slower and patient and attention requiring exercise. It’s a different mentality.

What Are We Thinking?

Not surprisingly we also have the highest pedestrian and cyclist fatality rates of all developed countries. Someone walking in the US is over twice as likely to be killed by someone driving a car as someone in Europe. Someone riding a bicycle is five times as likely to be killed. That’s an engineering failure of a rather huge magnitude.

Per capita, the United States has 15 pedestrian deaths per one million people and Minnesota 11. Sweden, Norway, and The Netherlands are all below 3. The average for the European Union is 5 and for all OECD countries is 7. If you remove the US though, then the OECD average drops to below 6.

These are all the result of poor road designs. What are US traffic engineering thinking when they design junctions like the one above that encourage drivers to look in the opposite direction of where they are going and encourage them to look away from people whom they endanger.

Perhaps there’s a good reason why no other developed country except Canada allows right-on-red.

Note: I took the lead photo because she made me happy. I liked her bicycle and fashion sense. It was a second after when she was almost killed.