In the 1950s, houses took root where peonies had grown. In the 1960s, Highway 62 separated a couple blocks of Minneapolis from the rest. Other city territory was ceded to the airport. And in 2017, my six-mile walk through the southeastern portion of the Diamond Lake neighborhood wound its way through all of this.

The complications involving Highway 62 and the airport help explain why my route map has more colors than usual, though a mapping omission plays a role too. The blue lines in the map show the two loops I walked, a main loop north of the highway and a little loop in the southeast. As usual, the red lines indicate spurs off of those loops, walked forward and immediately back again. And then there are the two connectors between the loops, one shown in black and the other in purple. They play differing roles in three versions of the route:

Starting out eastbound on 60th Street, the houses I initially saw were still from the 1940s, like those I had seen further north on my first day. As such, they were still generally one-and-a-fraction stories high with gabled roofs. A relatively typical example is the house from 1945 on the northeast corner of 60th Street and 11th Avenue South. Although typical in architecture, it stood out for its landscaping. 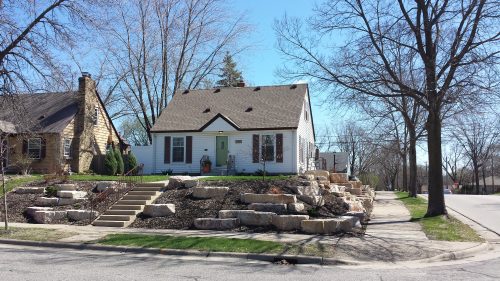 Placing those boulders on the embankment must have been quite a job. From my perspective as the passer-by rather than the worker, the labor was definitely worth it for the resulting visual interest. Although even something much smaller can also add a lot of interest, as I saw a block and a half further east.

A few stripes of contrasting color really jazz up the broad white expanses of the garage doors. The details are important. The vertical stripes are symmetrically beveled on the bottom, while the horizontal stripes, though blunt-ended, provide a similar symmetry through their varying lengths. And the asymmetry is as important as the symmetry, not only in the use of three long horizontal lines versus two short vertical lines, but also in the fact that the verticals protrude less far on top and are squared off there. 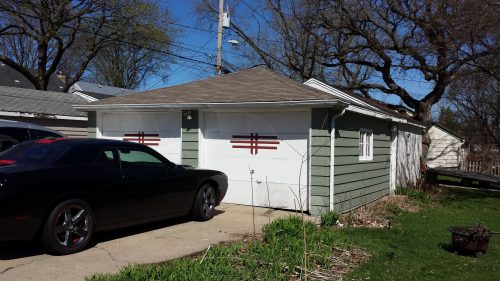 After entering airport property at 15th Avenue, I crossed over the freeway on Bloomington Avenue (the route map’s black connector) and headed south to 62nd Street, which I followed to 14th Avenue. In the photo taken at that intersection, you can see visual evidence that 62nd Street is the border between Minneapolis and Richfield: the paving changes color down the middle of the street, up to the point where it bends south and becomes entirely in Richfield. 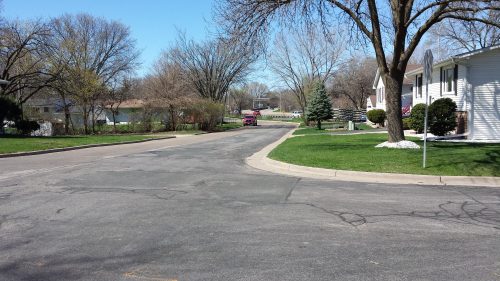 This photo sparks my geeky interest not only because of the boundary but also because of the difficulty of specifying the location. It turns out that saying this is at the intersection of 62nd Street East and 14th Avenue South is not enough. There are two such intersections in the City of Minneapolis: one north of Highway 62 and one south. Indeed, starting from this photo’s location and progressing northward, 14th Avenue has four intersections prior to 60th Street: 62nd Street, 61st Street, 62nd Street, and 61st Street. [Update after initial publication: David Schaal pointed out that there are actually three 62nd Streets and one 61st Street.]

After turning onto the portion of 61st Street that is south of the highway, I was surprised to see that there is a pedestrian bridge. (Recall, it wasn’t shown on the maps I used for planning. I added it to my route map in purple.) Although it is only accessible using stairs, that is presently not a barrier for me, so I walked it as an additional spur. 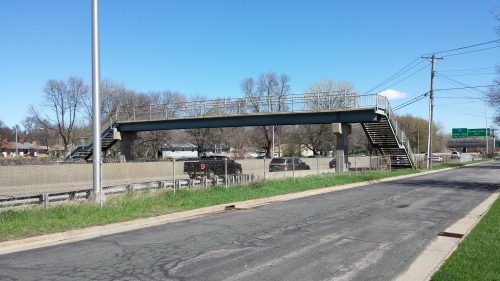 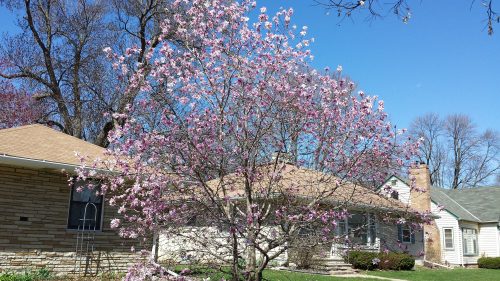 The homeowner, Alice Ferdinand, saw me taking the photo and came out to introduce herself. She told me that she had planted the tree as a seedling and marveled at its growth over the intervening decades. She also pointed something out that is visible in the background of the photo: the transition from the 1940s houses that are north of here to the 1950s. Her own is from 1954. Likewise, the neighbor to the north, which occupies the central position in the photo, is from 1953. Although some houses of that age look similar to those from the 1940s, these two are typical in being single-story structures with hipped roofs, that is, roofs that slope down in all four directions, without gables. The same is true of the house south of hers, on the corner with 61st Street, and all the houses south of 61st Street, such as the example in the next photo. 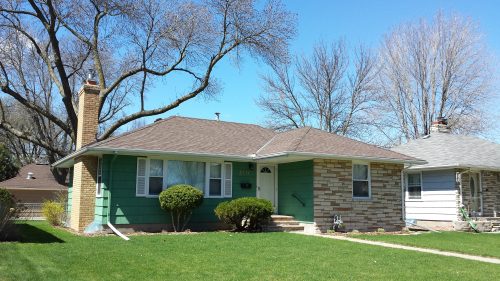 Urban development does tend to progress outward, so it isn’t precisely surprising that the southern portion of the neighborhood was developed more recently than the northern. However, there really is a quite sharp delineation, as though development paused and then suddenly surged forward again. My friendly local informant gave me the clue to understanding this when she mentioned that the land had been a peony farm.

From Richard E. Widmer’s “A History of Minnesota Floriculture” (p. 25), we learn that “In 1905, Alonzo B. Franklin started his nursery in Minneapolis. Later the firm became well known for the hybridizing and introduction of new peony cultivars. The firm closed down about 1952.”

Ahah! If the firm closed down about 1952, that would explain why the various plats named “Franklin’s Nursery 1st Addition” and so forth were developed in the following years. As to Mr. Franklin and his family, more later.

Architectural styles continued to evolve, such as into the elongated “rambler” form of this 1959 house on 62nd Street: 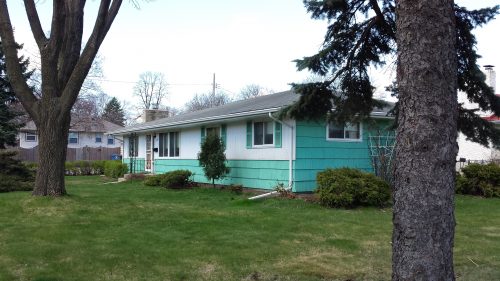 Of course, there’s more to see on a walk than just the houses. Heading north on 11th Avenue, about to turn left onto 61st Street, I was stopped dead in my tracks by a pair of boots sitting in the roadway. Completely aside from the incongruity of boots in the road on a beautiful day, I was struck by their arrangement, one pointing north, the other south, like a sculpture of Janus. 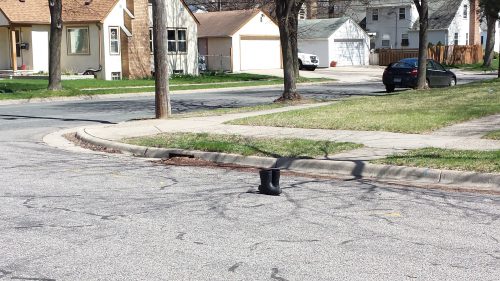 In the 6100 block of Elliot Avenue, I photographed a group of three houses, all dating from 1954, to illustrate their contrasting rooflines. On the left, 6109 was extended upward in 2011. In the middle, 6115 retains its single-story stature and illustrates that gabled roofs were still sometimes used. And on the right, 6117 shows the more typical hipped roof. 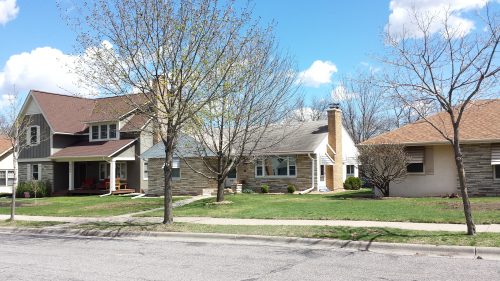 What I didn’t realize at the time was that the most interesting house in the photo is the one barely visible at the left, just sticking out from behind the expanded house. Perhaps I overlooked it because it is almost entirely screened from the road by two large evergreens in its front yard. Later I went back and got a photo angled in through the gap between the trees and the large house. 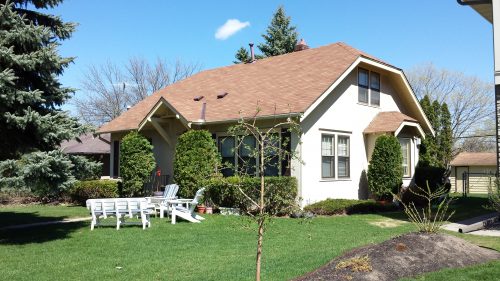 This would have been totally at home in the older Cooper neighborhood, but here it is decidedly peculiar. It turns out to have been the Franklin family home, where Alonzo B. Franklin lived out his last years together with a daughter. The 1940 census shows them as living at the address 6119 Elliot Avenue; he was then 82 and died four years later.

That address would be in the middle of the 6100 block, rather than the current more northerly location. In fact, from the map in the 1940 atlas, it looks like the house was quite literally in the middle of the 6100 block of Elliot Avenue: not just half way between the 61st and 62nd Street alignments, but also smack in the middle of where Elliot Avenue itself would need to be paved, once it extended south beyond 61st Street. At the time, that was all within the unplatted area of the nursery. The building permit records for 6119 and 6105 show the house was moved in 1951. The permit for the new foundation was issued to “L.V. Franklin,” presumably Alonzo’s son Loren. (There was no permit for the 1925 construction at the 6119 address because this area wasn’t yet within the City of Minneapolis.)

Speaking of Loren, after finishing with Elliot and 10th Avenues, I followed the gentle curve of Loren Drive from 62nd Street at Elliot Avenue to 61st Street just west of Chicago Avenue. This one curved block contains several novelties. To start with, I saw the emergence of attached garages. 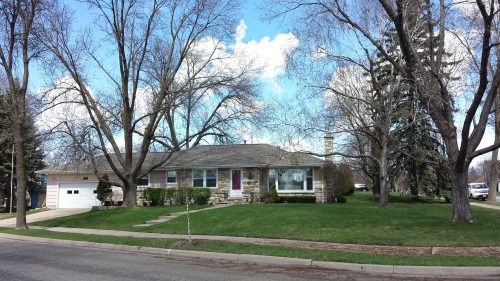 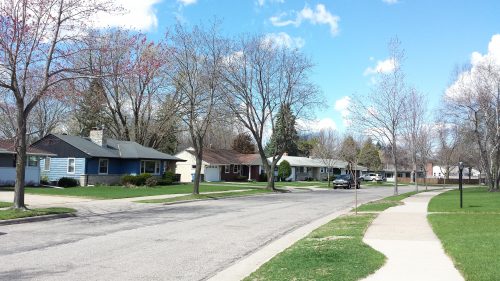 Next, as I neared 61st Street, I noticed some houses adopting more contemporary styles, whether in specific details or more whole-heartedly. 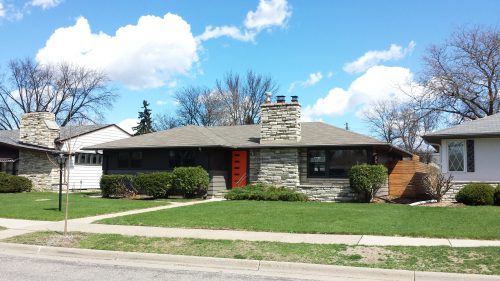 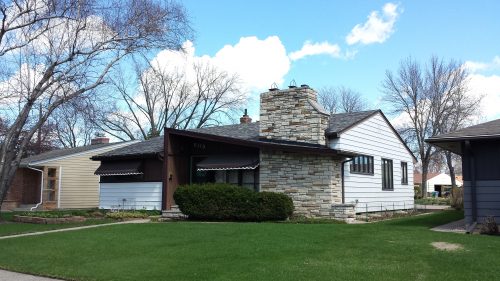 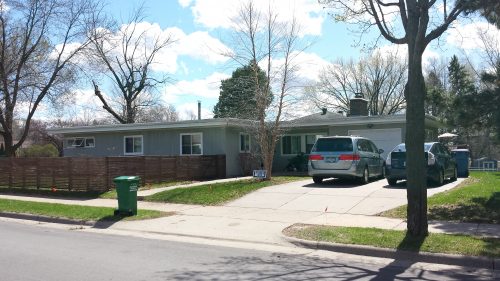 Returning to my starting point and looking at the 5900 block of Chicago Avenue with fresh eyes, the 1940s duplexes and houses that had seemed so familiar when I began now stood in marked contrast to the areas I had just walked through. 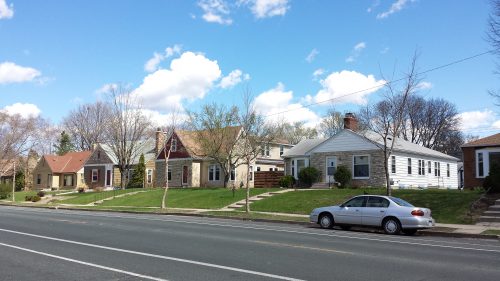