There’s been a lot of talk about transportation and housing development in the news recently. For example, I have discovered a deep love of hate-reading “Cars v. Bikes” and “Density v. Character” articles. I have also discovered that nearly every citizen is an armchair urban planner, and if we’re going to talk about this anyways, I want to clarify a few jargon terms that have been popping up that aren’t the most intuitive concepts to understand right away. I wanted to have this article on hand so the next time we’re all stuck in the Star Tribune comment section and someone says something stupid, we can link them to this article which they can ignore before unleashing an epithet.

First we have “negative externalities.”

Here’s an example. Let’s say you crash into a building. Hypothetically, let’s just say the building in question is the Groundswell coffee shop in Saint Paul. If you’re on a bicycle, the negative externalities are limited to the staff being interrupted from their work when you limp inside to ask for a couple bandaids. If you’re walking, there are only positive externalities because everyone who watched you bounce off the window had a good laugh. If you’re driving a car… well… let’s hope you missed the patio seating. 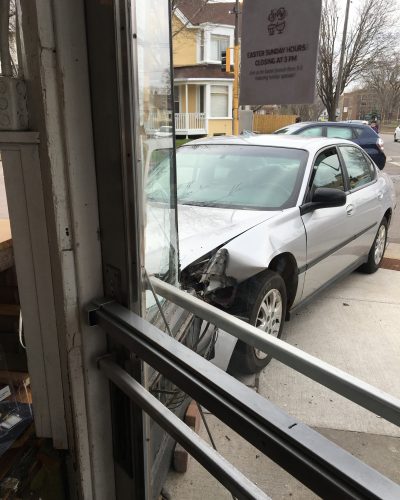 A second term is “induced demand.”

The term “induced demand” is a great way to justify your 4-year degree instead of just saying “if you build it, they will come.”

The point is that humans are great at working within systems. All of our best or worst moments in history are the result of enough people following along with a thoughtfully designed system. When we’re talking transportation, induced demand is why expanding highways to cure congestion is dumb. It’s dumb because when you build those extra lanes, expanding the car system, the only thing you’ve done is induced more people to drive. By making that mode, driving in a car, the easier choice, you’re amplifying the numerous negative externalities that come along with car usage.

Let’s explore induced demand for a moment because it comes up all the time. Imagine you’re going to the movies. You can get to the theater either by car or by bicycle. If you take the bicycle, there’s a bike path directly to the theater only a mile away. Let’s say that if you take your car, the same trip would take 5 miles because there isn’t a direct route.

Unfortunately for the drivers, this hypothetical direct bike path takes up a lot of space and cars aren’t allowed on it. Even if they were, it wouldn’t feel safe to drive a car on the bike path because too many cyclists would be weaving around at high speeds, and some of them would be completely wrapped up in their cell phones.

(You could be killed! Wait. No. Which one were we talking about again?)

OK. Finally, we have the third important term. This one is from housing: “artificial scarcity.”

In context of housing artificial scarcity is created when there is demand for housing, but an appropriate amount of housing can’t be built because of things like zoning ordinances or groups of homeowners who feel entitled to dictate what happens on land they don’t own. Think back to Econ 101 and The Law of Supply and Demand, and you’ll understand why artificial scarcity is so appealing. As long as that demand keeps building, and as long as the supply doesn’t grow along with it, the chunk of the supply that homeowners own gets more and more valuable without anyone having to actually add tangible value to it.

OK, time for a pop quiz!

Let’s tie it all together in one last example. Rising rents are one of the negative externalities of artificial scarcity in the housing market. One way we could help ease those negative externalities and reduce that scarcity would be to change our zoning laws to allow homeowners to build “granny flats” on their property. This would induce demand for building granny flats because it would be a good value add for property owners that they previously didn’t have access to due to exclusionary zoning ordinances.