Were it not for the Mississippi River and its St. Anthony Falls, there would be no downtown Minneapolis, and so my exploration of the neighborhood inevitably brought me to the riverside and its historic gateway, railroad, and mill areas.

Although I saw a few structures dating to the 1870s, the area has been so extensively redeveloped in recent decades that the 1934 post office counts as an old building. At any rate, as with my first three days in the neighborhood, I was only able to record a small fraction of what I saw, and that fraction was rather skewed toward the old.

Skewed though my selection might be, it began with a modern building, 100 Washington Square. On the previous day’s walk I highlighted “the architect Minoru Yamasaki’s masterpiece, built in 1964 for Northwestern National Life” and remarked that “the same architectural firm later designed two other nearby buildings,” one of which I proceeded to show. The remaining one is 100 Washington Square. Thanks to its structural design, it accommodates a great deal of sheltered open space, which has been landscaped so as to transition smoothly into the surroundings. I chose to focus my photo on this seating area, leaving Andy Sturdevant and Ethan Jones to provide a more comprehensive view of the building. 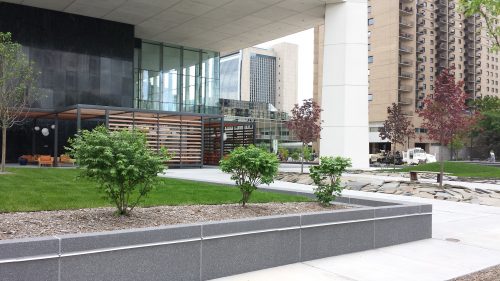 Where Marquette Avenue tees into 1st Street, I initially turned right, walking a one-block back-and-forth spur in front of the post office before continuing the other way, toward Hennepin Avenue. I got better photos of the post office from other, later vantage points, but walking directly in front of it did let me appreciate the flowering bushes that soften its otherwise concrete-dominated streetscape. 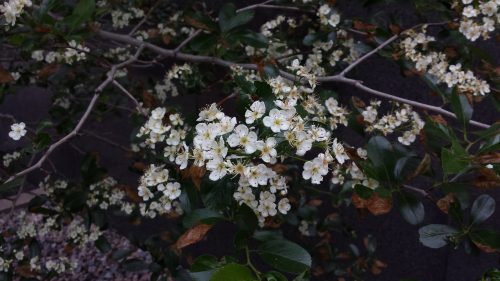 Walking out over the river on the Hennepin Avenue bridge provided good views of both the bridge and the adjoining areas, including in particular the post office. Those who cross the bridge in vehicles miss a lot. 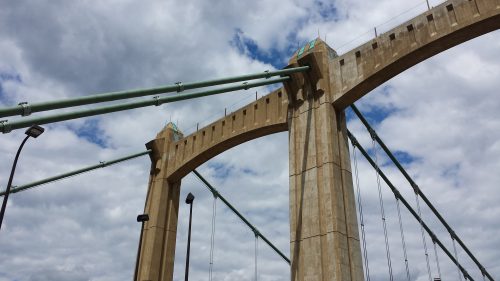 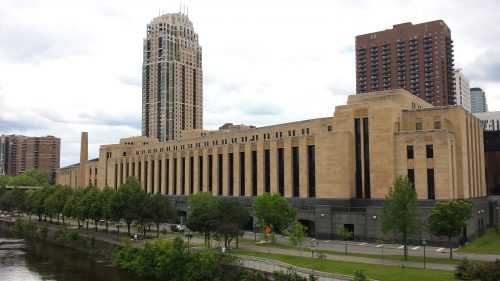 Staircases and a ramp lead down from the bridge to West River Parkway, as well as providing additional vantage points. Once down at the parkway, a meandering wall along the pedestrian path is spiced up with some bronze animals. 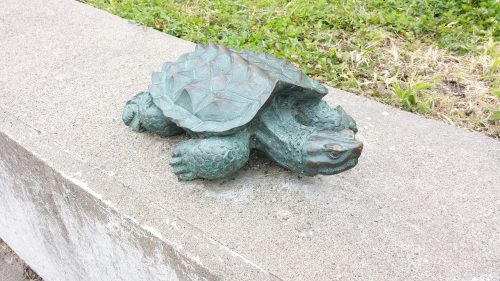 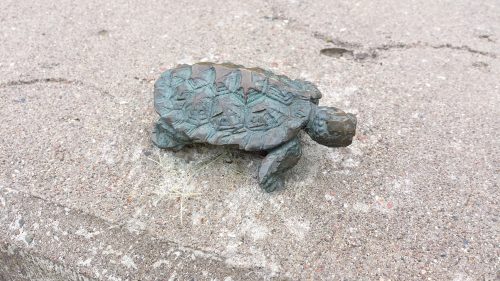 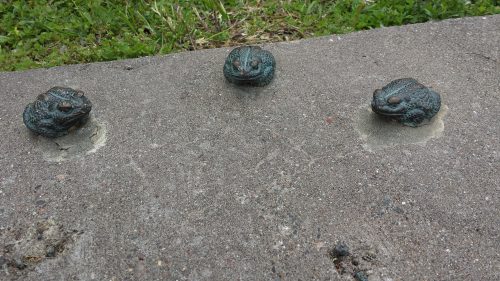 Vehicles traveling on West River Parkway have nowhere to turn until Portland Avenue, but pedestrians can use a short staircase or ramp to access the corner of 5th Avenue South and 1st Street. That same area is also home to a ruin I found particularly interesting. Given that the whole riverfront is dotted with 19th-century ruins, this one stands out by being decidedly 20th-century. Bill McAullife tells a brief version of how the Fuji-Ya restaurant came to this spot in 1969, got bought by the Minneapolis Park Board 22 years later in an out-of-court settlement, and now has sat vacant even longer, awaiting its demolition as part of a park development. 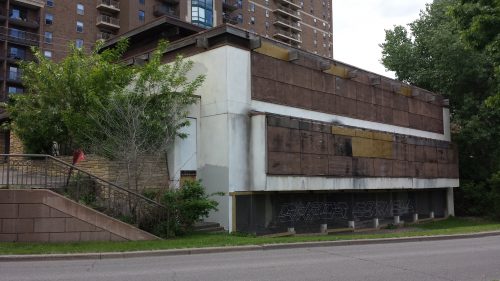 Instead of taking the stairs, I continued to Portland Avenue and from there to 2nd Street. The block of 2nd Street between Portland Avenue and 5th Avenue South has interesting structures on both sides: the Ceresota Building (a 1908 grain elevator) on the riverward side and the MacPhail Center for Music on the landward side. 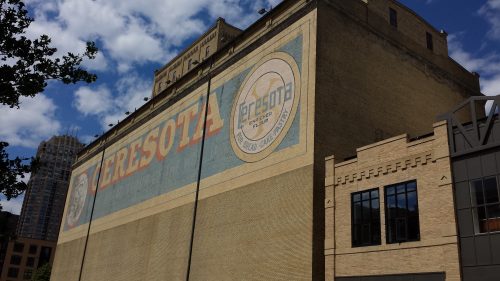 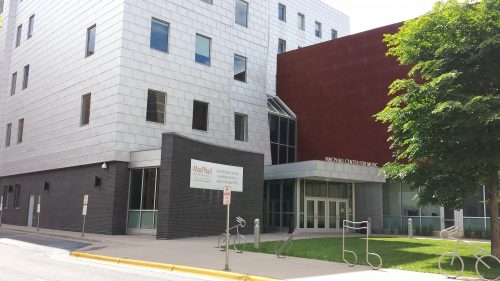 MacPhail Center for Music (2008) with Bike Racks on 2nd Street 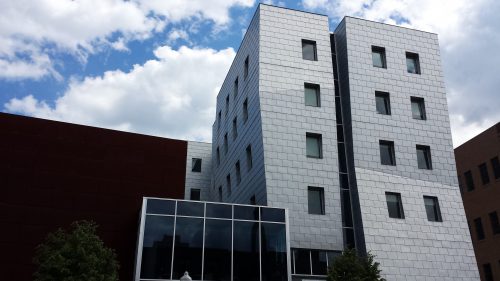 Taking 5th Avenue South from 2nd Street to Washington Avenue, I passed the opening of the Milwaukee Road train shed. I had photographed the associated station building on day 3, so this completed that picture. The actual shed is even longer than this photo suggests, because the far end of it is closed off before it reaches the station building. 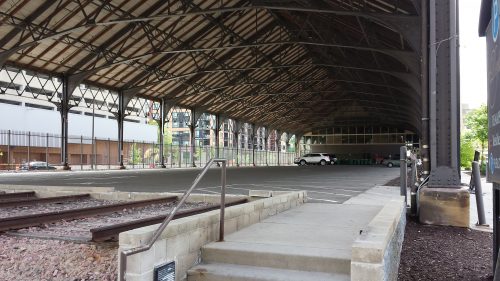 From Washington Avenue, I took a long spur out 3rd Avenue South, partway across the Mississippi River and back. The first thing I passed, across 3rd Avenue from the Milwaukee Road station, was the 1913 Federal Building. It was built as a post office but served that function for only a couple decades before being replaced by the one a couple blocks away. It’s interesting to see the change from neoclassicism to art deco over such a short (though eventful) period of time. Indeed, with its chamfered corners, the 1934 post office even verges into the forward-striving streamline moderne, a far cry from the backward-looking 1913 building. 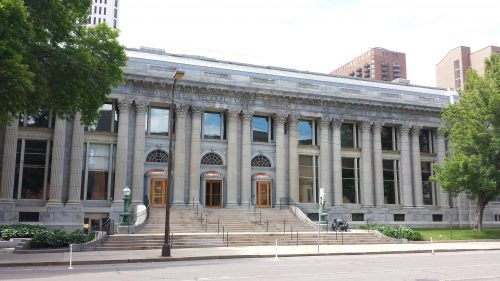 Even though the vast majority of the many train tracks formerly threaded through this area are now gone, one can still find imprints left behind. For example, from the 3rd Avenue bridge, if one looks toward 1st Street just downstream from its intersection with 3rd Avenue, one can see an inviting little semi-secret glen formed where something no longer is that 1st Street once needed to pass over. Or at least as inviting as anything can be that is closed off with a gate. (The other side of that gate is a driveway behind the Barrel House or Mill Place building, which in 1880 benefited from rail service.) 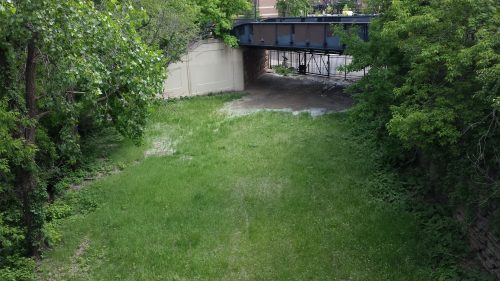 Looking toward the Stone Arch Bridge from the 3rd Avenue bridge, one see’s the closed locks on the right and the start of the falls on the left. 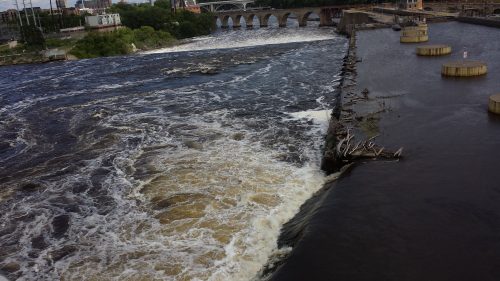 Backtracking to Washington Avenue, I took the opportunity to photograph the neoclassical Federal Building again from another angle. Four minutes later, I had used 2nd Avenue South to walk the two blocks riverward from Washington Avenue to 1st Street, confronting me again with the 1934 replacement. 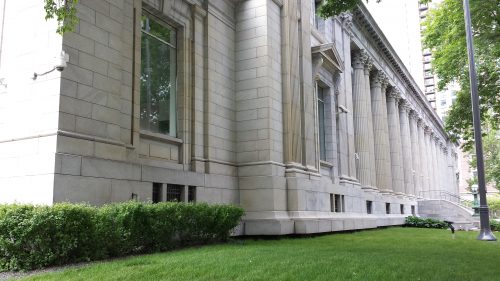 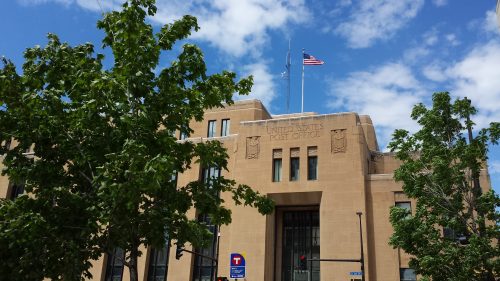 I followed 1st Street back downstream to 5th Avenue, arriving back at the top of the steps near the former Fuji-Ya. Across 5th Avenue from where 1st Street ends, the Crown Roller Mill Building looks much like it must have when constructed in 1880. However, that’s the result of a complex process and only holds true from the outside. The building was used for flour milling until 1953, then for warehousing and industrial processes (including animal rendering) until 1983, when it was massively damaged by a fire. All that was left was a fraction of the exterior walls. The rest of the exterior walls we see today were built to match, and a mansard roof similar in appearance to the original finished the exterior illusion. Inside, a gleaming modern office building was constructed from scratch. Ann Calvert tells the story. 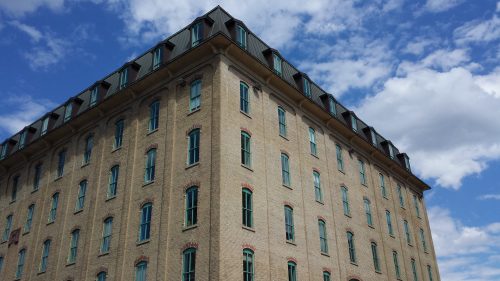 From 5th Avenue, I took 2nd Street back to Hennepin Avenue, passing down the middle of the area I had previously looped through. The final block of 2nd Street, from Marquette to Hennepin, is a pedestrian mall, part of Gateway Park. 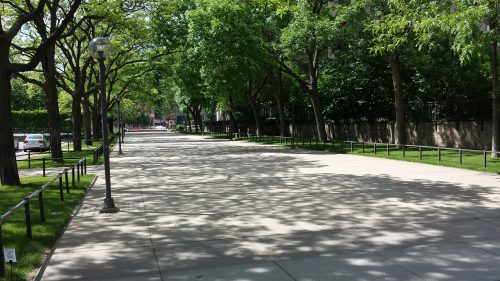 One quirk of my route map is that it ends with a single block of Washington Avenue upstream from Hennepin Avenue, whereas the entire rest of the walk had been downstream of that dividing avenue. I didn’t realize it at the time I did the route planning, but this actually makes sense in terms of architectural style. Most of what is upstream of Hennepin are the old Warehouse District buildings, but on this one block, there is a bank and office building from 1969 that looks very much at home with the Washington Square buildings designed by Minoru Yamasaki and his firm. 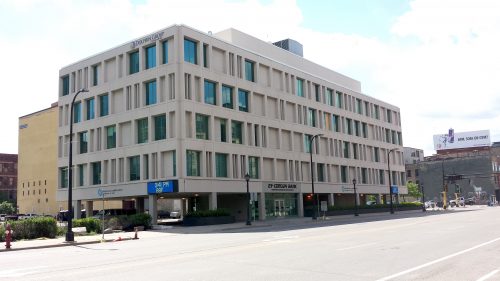 After Downtown East and Downtown West, I’m in for quite a change moving on to East Calhoun (ECCO), East Harriet, and East Isles. That’s the joy of an alphabetic traversal of the neighborhoods, though — some time spent intensively focused in one area, then on to something quite different.

Editor’s Note: Max Hailperin is walking each of Minneapolis’ 87 neighborhoods, in alphabetical order. He chronicles his adventures at allofminneapolis.com, where the original version of this article was published June 3, 2017. We’re sharing them here at streets.mn.