When you live in Minnesota you come to expect that there will be snow during winter. We’ve crafted numerous adaptations to provide comfortable winter living, including the declaration of a “snow emergency” when streets are difficult to pass with a personal car. Is it also an emergency when you cannot travel by bicycle (or walk)?

If the City of St. Paul is going to take alternative modes of transportation seriously, we must be serious about providing safe and dependable winter routes for bicycles in a connected network. We also need to have a serious discussion about sidewalk clearing, but this article is going to focus on bicycle transportation.

During a “snow emergency” the only requirement for residents and visitors is to remove parked cars from a street for half the day depending on whether it is a day or night “plow route.” St. Paul’s website warns car owners that “any vehicle parked in an area that has not been plowed full-width is subject to ticketing and towing for 4 days (or 96 hours) after the snow emergency initially took effect at 9 p.m.” It appears that most major streets in the city, including all downtown streets, are “night plow routes” while side streets alternate between day and night clearing. Look up your street here.

Does St. Paul actually tow your car if you leave it? There are many examples of cars covered with snow that never get towed. Meanwhile, one evening two years ago I had out of town guests and wasn’t sure about my street. Of course, the car got towed. Towing does happen but it is inconsistent, and it doesn’t happen enough. 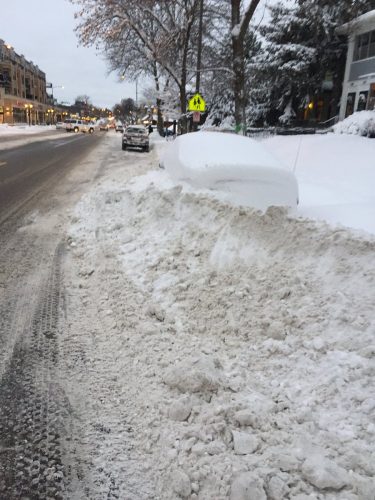 1/23/18, Grand Ave between Chatsworth and Oxford, by Nick Hannula 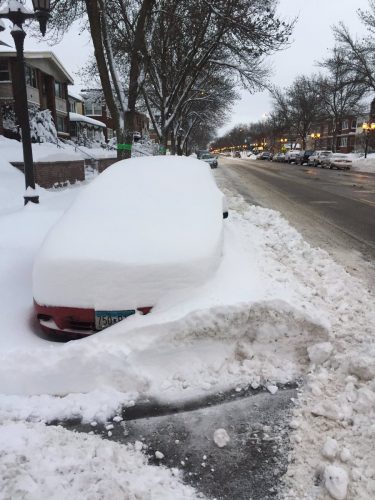 When it is not a snow emergency St. Paul explains its priorities as such: “our efforts are concentrated on main roads, and high volume areas. It is not a standard practice to plow and or salt residential streets during non-snow emergency snow events due to costs, time constraints, and environment concerns […] Our first focus is on safe and passable main streets – for the most amount of travelers, public safety vehicles, and public transit.”

Did you see anything about bikes (or pedestrians) in that statement? Your answer may depend on your interpretation of “travelers” or “most amount.”

I live by the Phalen Boulevard / Bruce Vento Trail, and the city has done an excellent job clearing this trail after each snowfall this winter. However, this trail is not competing for snow storage with car lanes or car parking. The in-street bike lanes just a few feet away on Phalen Boulevard, by comparison, have been unusable.

We don’t have a practice in St. Paul of hauling away truckloads of snow after each snowstorm, so the snow has to go somewhere. Ideally it wouldn’t be on the sidewalk, in the car lanes, bike lanes, or parking lanes, but that doesn’t leave much space. Some streets have boulevards where the snow piles high. In practice it often just gets pushed against the curb, whether that’s in a parking lane or a bike lane. Streets with nothing but car lanes, like much of Snelling Avenue, appear to get an efficient curb to curb clearing.

The worst situation happens, however, when snow is pushed into the parking lane (or left there because someone didn’t move their car), and the plow clears the car and bicycle traffic lanes. Why is this the worst, you ask? Because drivers continue to park on the side of the street as if the bike lane is part of their parking lane. And we all just sit back and let them. This means we have no bike lane. 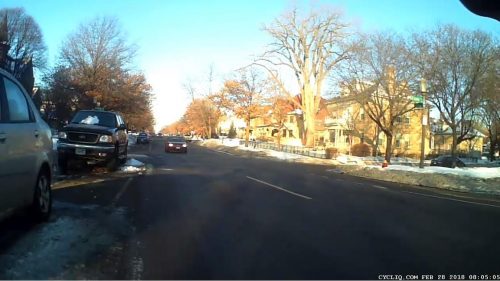 In 2015 the St. Paul City Council adopted the St. Paul Bike Plan. This document outlines a network of bikeways throughout the city, and it also provides a functional classification of either “major” or “minor” bikeways.

According to the Bike Plan, Summit Avenue (pictured above) is considered a “Major Bikeway.” After snow storms, however, the bikeway is not even usable, while car movement is completely free and car parking continues unabated. Summit is not the only street like this.

What does it mean for the City of St. Paul to have a functional classification of bikeways?
The Bike Plan itself states:

Major bikeways form the backbone of the bicycle network. They carry the majority of longer-distance bicycle trips and provide the primary connections to major attractions and trip generators. Major bikeways provide the primary connections across major barriers (e.g. rivers, railroad tracks, freeways) or to other adjacent communities. Greater weight should be given to the needs of bicycles regarding questions of how to balance the competing multi-modal needs. Major bikeways should be designed to anticipate a larger number of users.
Major bikeways should be distributed throughout the city at approximately one-mile spacing. This plan prioritizes facility types on Major bikeways that provide dedicated space to cyclists, such as bike lanes, cycle tracks, or off-street paths. The designation of a corridor as a major bikeway emphasizes the needs of bicyclists along these corridors. In some cases (but not all cases), it may be necessary to remove parking, travel lanes, or other roadway features to establish space for use by bicycles, and when these occasions arise on a major bikeway, this designation gives greater weight to the needs of bicycles than on other bikeways.” (p. 41)

There is no mention of winter or snow removal in this description, but this classification was created to “help guide city policies regarding development, maintenance, and design of bikeways” (p.40). If a heavy snowfall doesn’t trigger an “emergency” we don’t clear every street and we won’t be clearing every bikeway, either. But we clearly need to use a bikeway functional classification to create a new city policy about winter bikeway maintenance and snow clearing priorities.

I will repeat the city’s stated priority for snow plowing: “Our first focus is on safe and passable main streets.” This needs to apply equally to our bicycle “main streets.” While the city is doing a great job on off-street bikeways, we need to refocus efforts on “major bikeways” that have in-street lanes.

It may be that the functional classification in the existing Bike Plan needs to have a third category – perhaps “collector” or “major arterial.” Whatever group of bikeways are chosen, they need to be named, they need to be connected, and they need to provide adequate coverage of the city.

What do we need to do on those streets?

Obviously, this whole conversation is about cyclists who choose not to ride in car lanes if they don’t have to (which often leads to angry drivers). A better answer to the entire situation would be to install a network of protected bike lanes, which can be plowed. Really. It’s possible. 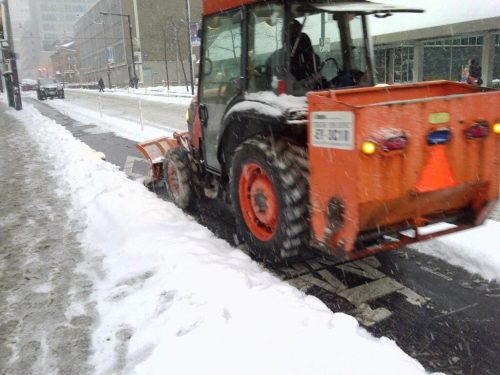