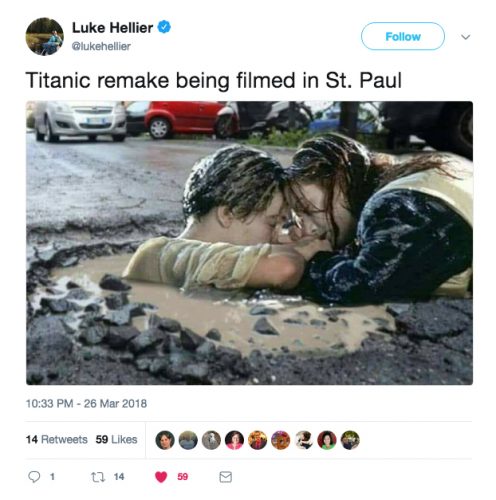 Do you want the bad news or the worse news?

The bad news is obvious if you’ve been driving around Saint Paul in the last month or so. I’m sure you’re aware of the potholes.

They are bad! We’re talking potholes as big as poodles, ruts the size of the Twinkie from Ghostbusters. We’re talking about pavement with the integrity of Trump’s White House team.

But again, if you’ve driven in Saint Paul lately, I don’t have to tell you about this because you already know.

That’s the bad news. The worse news is that it’s only going to get worse.

In my role on the city Transportation Committee, I get to see a bunch of transportation reports and documents, and I recently got a glimpse of the latest update in Saint Paul’s street paving and maintenance budget. Starting a few years ago, the city’s Public Works department began publishing plans that extend five years out in advance, and broadly point to how it is going to spend its money to fix, maintain, and reconstruct city streets. 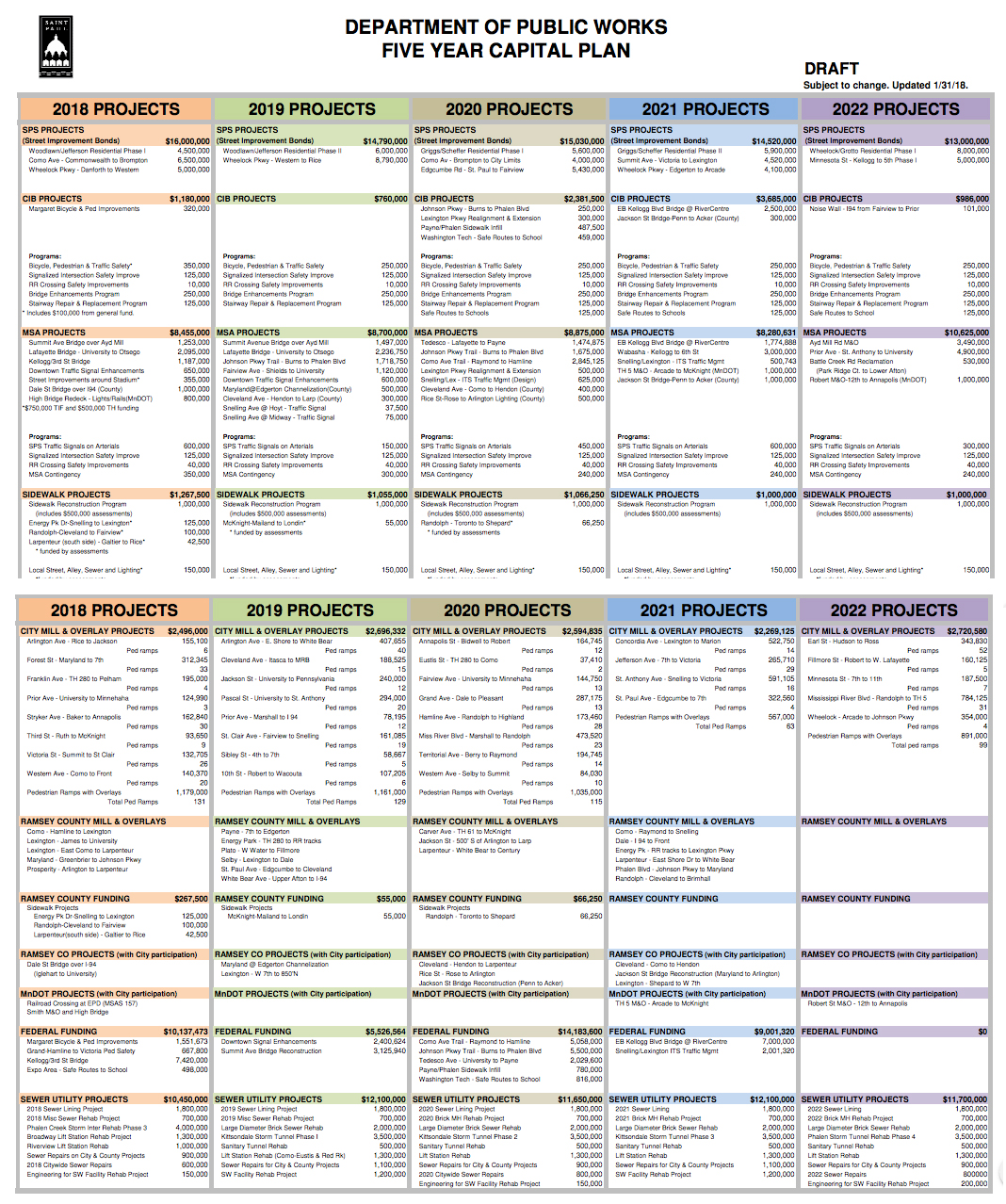 Five-year budget looks like this! Click to expand, and see tentative plans for spending Saint Paul’s road budget. There are LOTS of pots of money, but even adding them up, the spending falls short.

This was a great development. Previously people trying to plan for transportation discussions in Saint Paul (like myself) had to sort of guess or finagle ideas about what might happen in the future. We might get six months’ notice about a street project, just enough time for folks to get mad about it but not enough time to do proper outreach. So having a tentative five-year plan is a big step forward. 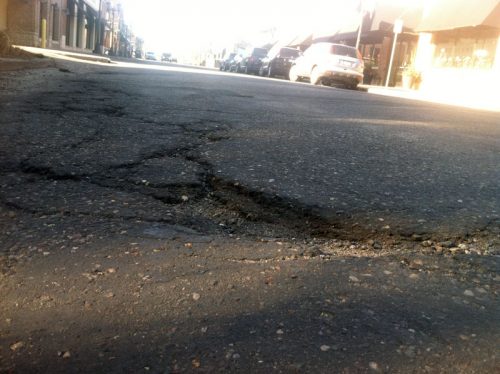 A Saint Paul pothole from my favorite pothole essay a few years ago.

That said, it’s also really depressing. At least if you’re only speculating about what’s going to happen, you can let your imagination run wild and be optimistic. But actually seeing in black-and-white the official city street budgets is a sobering dose of reality, especially given Saint Paul’s already dilapidated streets. Fred Melo pointed all this out in a recent lengthy Pioneer Press article on the topic, which offers a good overview. Here’s the bottom line:

St. Paul’s road-repair funding doesn’t stretch all that far. It covers about eight miles per year out of 850 miles of city streets.

To fix roads, the city uses $12.5 million annually from its capital improvement or street reconstruction bonds and $13 million annually in municipal state aid. The latter, funded by the gas tax, license tab fees and other aspects of the state’s highway user fund, provides more money each year based on a combination of population and need, but road repair costs also go up annually.

The state funds include $9 million for road construction and $4 million for street maintenance, such as mill-and-overlay work, where the top two inches of a street is ground off and new pavement put in its place.

Simply put, Saint Paul is broke and the streets aren’t going to get better.

For example, there are a whole bunch of streets on the West Side where I live that are literally crumbling (e.g. Winifred Street, George Street, Wabasha Street). They do not appear anywhere on the five-year plan. I can only imagine how much worse they will look after at least five (>=5) more freeze-thaw cycles of winter and spring. We’re talking about back-to-gravel territory here. 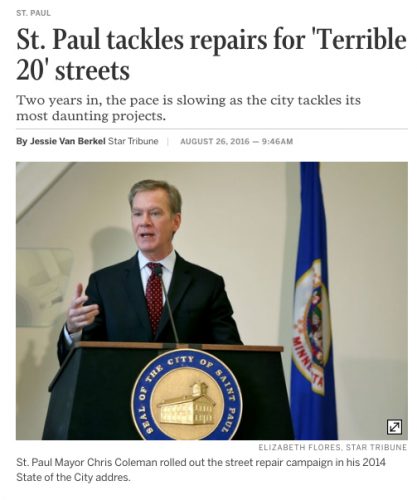 The cold hard truth is that Saint Paul hasn’t increased city spending on streets for many years, and an annual $15 million does not buy you what it did back in 1997. There’s always the $12 million in state money for more “collector” type streets, but those are also the most heavily used and those dollars are in hot demand. They’re used for the local match for all sorts of county and state projects, and the list is long. Take for example the “terrible twenty” brouhaha that happened a few years ago, and you get the sense of the dire need for those MSA (municipal state aid) dollars

Not only that, but you might have heard about the recent “right-of-way assessment” lawsuit that pulled another $30M out of the city’s general fund, leaving non-profits, schools, and state agencies free from the fiscal responsibility for paying for any street fixes. Politically, it seems to me that the funding vacuum and subsequent tax shift put the kibosh on raising taxes further for street maintenance. Last year’s tax shift was an eye-opening 23% levy increase to make up for the lost revenue, and I doubt there is appetite for raising taxes further.

Into this Grim World Waltzes the Ayd Mill Money Pit 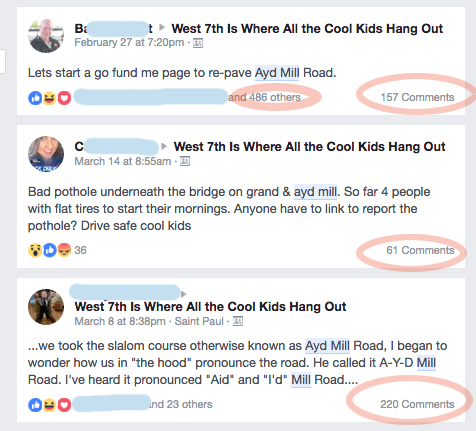 In a fiscal situation like this, a city like Saint Paul should be very calculating about where it spends its precious street dollars. That’s why I get upset every time I see proposals to spend millions on a half-baked antiquated freeway to the suburbs.

This year, for the first time in my career as a Planning Commissioner, the 5-year budget plan included a line item for Ayd Mill Road (AMR). An Ayd Mill Road extension to I-94 also appears in the city’s draft Comprehensive Plan, on the “freeway expansion” map.

These items are a terrible waste of money.

First, I fully understand that Ayd Mill Road, a 50s-era concrete limited-access urban freeway, is the most falling apart of the city’s falling apart streets. As neighbors on Facebook groups rightly point out, driving on it these days is atrocious.

To me, the best metaphor for driving on Ayd Mill is how “Red Leader” must have felt when he went into that trench to attack the Death Star.

“I’m goin’ in,” you say to your loved ones as you approach the Ayd Mill exit ramp off I-35.

Then you enter the trench. There are constant bumps and turbulence, as if lasers are shooting at you the whole time. And then someone in a giant black SUV starts riding your tail like Darth Vader, doing their best to get you out of the way.

“Almoooost there,” you say as your steering wheel has a seizure. “Almooost there…”

You grip the wheel, using impossible force to keep your car aimed down the narrow trench.

“Stay on the path to Target…”

Keep in mind that I’ve been using Ayd Mill Road my entire life, and I understand its utility. Even before it was (illegally) “connected” to I-35 in a “test” by Mayor Randy Kelly, it was the fastest way between my mom’s house in Mendota Heights (a wealthy Dakota County suburb) and my dad’s house in Saint Paul’s Lex-Ham neighborhood. I’ve probably been on it thousands of times.

Once the city linked it to the freeway, it was even easier, shaving two or three minutes off the six-mile drive. It’s also a handy shortcut between 94 and 35, helping with Dakota County commutes to Minneapolis.

In other words, this road is Charlie Brown’s political football, and Ayd Mill Road fatigue is real. It’s set in so completely that if you even utter these three words to a Saint Paul politician, the spark in their eyes will fade and extinguish, their shoulders will slump, and they immediately will turn away in search of more hopeful and pleasant conversation topics like abortion or Palestine. 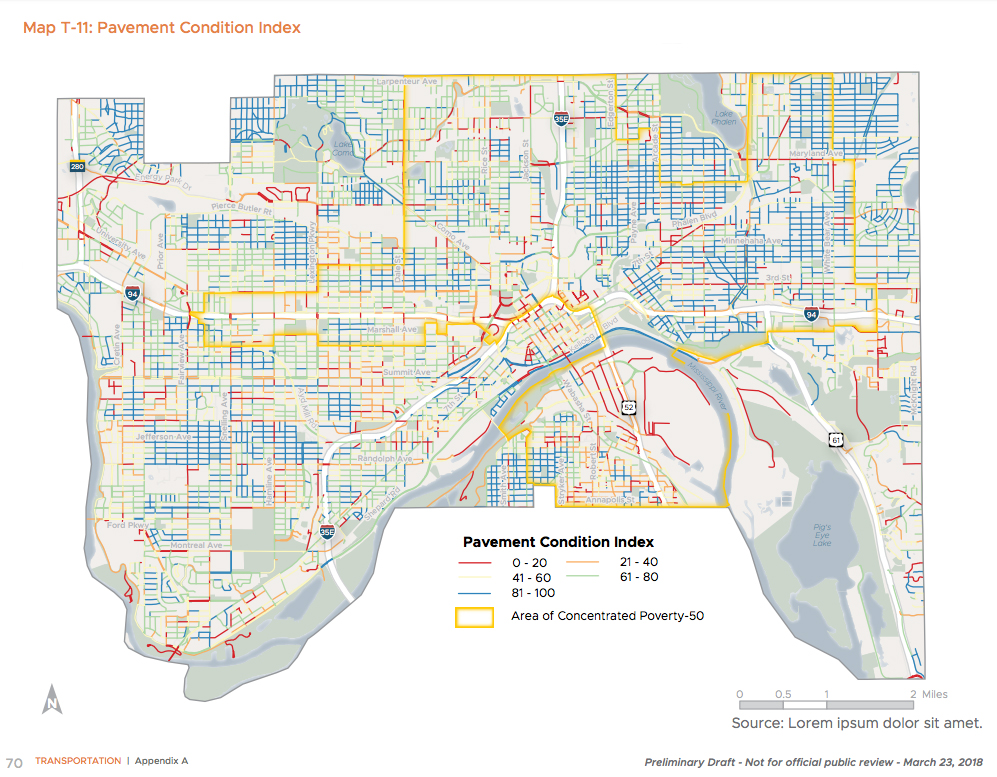 Two maps from the 2040 Draft Comp Plan in direct conflict with each other. 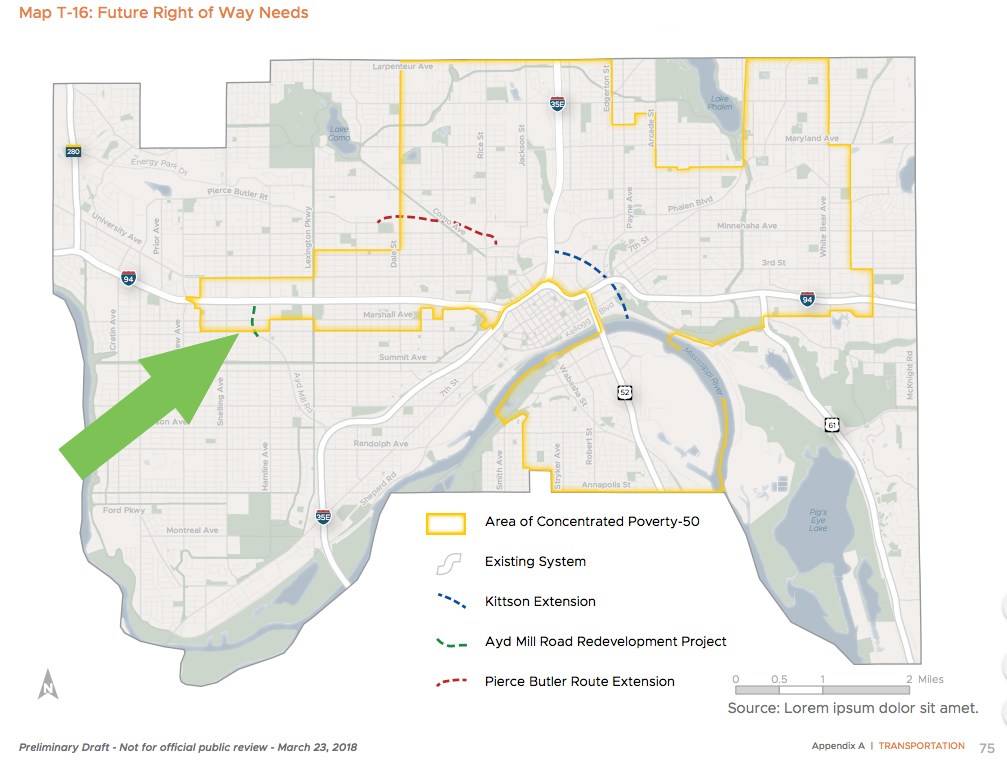 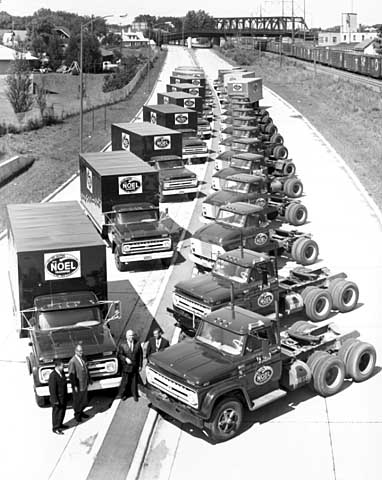 Given the Ayd Mill Road fatigue, let’s put aside all the debates about the history of Ayd Mill Road, which people use it the most, its impact on Selby Avenue, whether it should be connected to Interstates 94 or 35, and what might happen to surrounding streets if it was closed.

Set all that aside for a moment and focus instead on this key fact:

Ayd Mill Road is “owned” by the city.

I believe either decision would be a mistake, but especially in a budget crunch, spending significant city money on this boondoggle is a huge mistake. 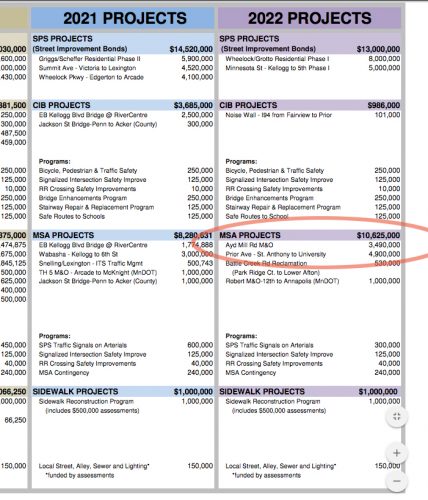 For the record, you can’t “mill and overlay” concrete.

For one thing, the $3 million dollar line item in the city’s five-year budget only scratches the surface of an Ayd Mill reconstruction. I’m no engineer, but I’ve seen enough street reconstruction projects to get a general sense of scale.

Ayd Mill Road, even without a 94 connection, is a two-mile four-lane divided concrete “highway” with at least four on-ramps. The entire existing infrastructure dates from the late 1950s to early 1960s. It’s all falling apart and needs to be totally reconstructed.

The best cost “comparison” I could think of was the Phalen Boulevard project, a three-mile limited access below-grade surface street constructed through the East Side in the early 2000s running from near the Capitol to Lake Phalen. Just the construction costs for that project was something like $70M in the late 1990s. In today’s dollars, that’s well over $100 million, and we all know how project budgets manage to grow of their own accords. 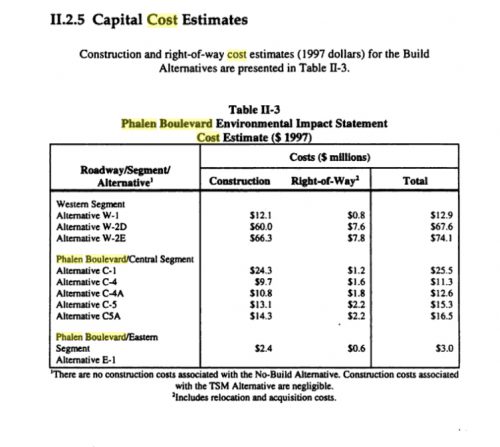 That number is just a ballpark, but the key point here is that the city’s existing line item —  a massive $3,000,000 — is off by at least an order of magnitude, if not two. That three million dollars represents a quarter of the city’s annual MSA spending.

Keep in mind that this is for just re-building the status quo. An actual I-94 connection, as proposed in the draft comp plan, with all the land acquisition costs, extra onramps, and flyovers, might double this cost. That’s just a guess, but given the complexity, I think it’s fair.

(I’m guessing that just the engineering study to find out how much it would cost to “connect” Ayd Mill Road would be a six-figure price tag.)

There’s a lot more to say on this topic, and if you are curious about this weird old armpit of a freeway and its place in Saint Paul’s past and future, there are lots of articles here on streets.mn or on my blog about it. I’ll surely be writing about this many more times if it keeps threatening to suck up the city’s delicate street maintenance budget like an asphalt rancor monster. 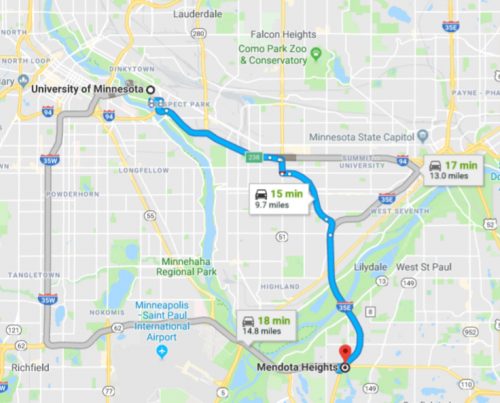 A two-to-three minute difference: we don’t NEED this obsolete freeway.

The next time you hit a pothole in Saint Paul, imagine what it will be like after 5 or 10 more winters of no maintenance.

Then ask yourself these questions:

Who does Ayd Mill Road serve?

Stay tuned for more on this topic, including why getting a big magical grant would go against Saint Paul’s priorities, and what fiscally sound alternatives might look like.

(Let’s just say I’d like to do to Ayd Mill Road what Luke Skywalker did to the Death Star. Just blow it up.)

In the meantime, enjoy the oncoming spring! And may the force be with you. 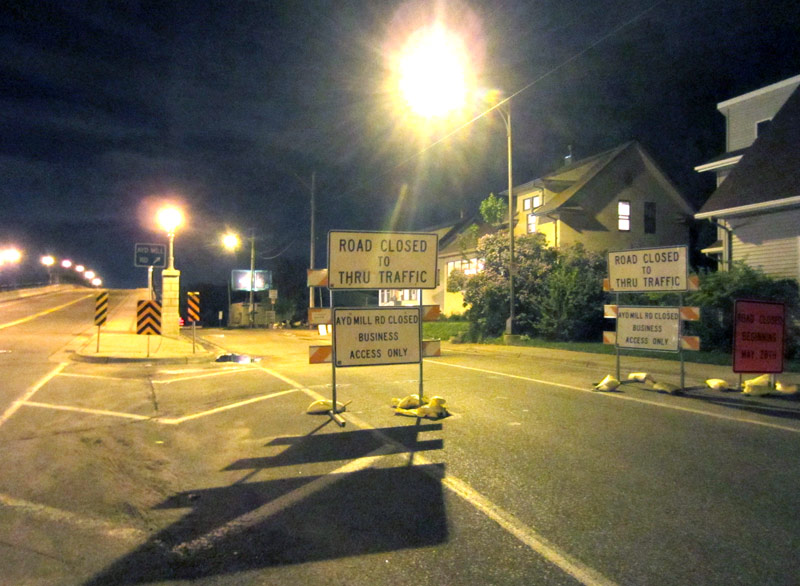 A vision of the future.