As on my first day in the Ericsson neighborhood, the blue tinted area on the route map shows the full neighborhood, whereas the heavier blue and red lines show where I walked this day. (The blue line shows the main loop, starting and ending on 42nd Street East at Nokomis Avenue South. The red lines show forward-and-back spurs.) Some of the eastern part of the neighborhood is still left for a third day.

I took my first photo practically as soon as I had gotten off the bus, just a couple houses down Nokomis, because the warm morning light was so attractive. As you can see, the mix of styles continues to include traditional one-and-a-fraction-story houses. 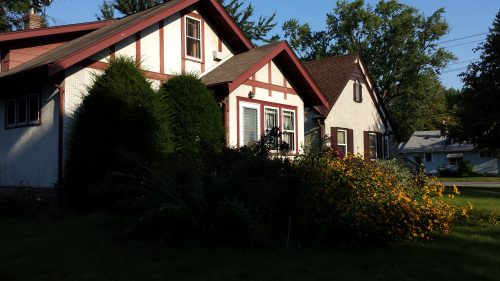 Recognizing the prevalent styles also lays the groundwork for noticing when an individual home-builder chose to be more daring. For example, as I walked 46th Street on my first spur off of Nokomis, my eye was immediately drawn to the two-story house on the northeast corner of 46th Street and 31st Avenue. Its porch and picture windows face across a front garden to Minnehaha Creek and its surrounding strip of parkland, integrating the interior and exterior environments. In another typical aspect of mid-century modern style, the roof is a single plane — a shed roof rather than a peaked roof. 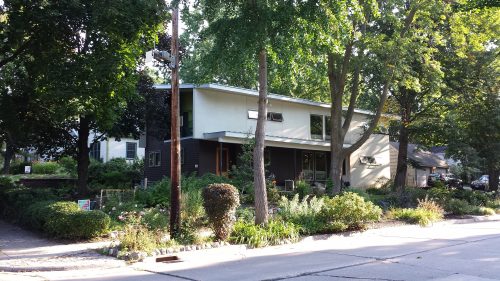 Most of the houses face onto the avenues rather than the streets, though I did later see some exceptions, particularly on 45th Street. However, even when a street has only garages between the corner houses, that doesn’t necessarily make it uninteresting. For example, following the 46th Street spur the other direction, into the block between 30th and Nokomis Avenues, I was attracted to one garage not only by its decorative painting but also by its incorporation of clerestory windows. 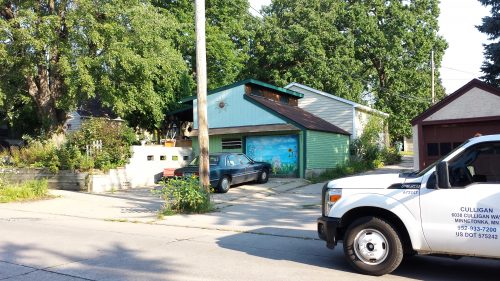 Once I had completed the spurs on 46th Street, 29th Avenue (south toward the creek), and 47th Street, I continued on Nokomis Avenue to Minnehaha Parkway, the southern border of the neighborhood. Before turning back northward on 30th Avenue, I needed to walk a few more spurs along the parkway itself and back toward the creek (from the south) on 29th Avenue. The parkway includes a broad median, which at the intersection with 28th Avenue has a sign doing double duty as the central axis of a garden. 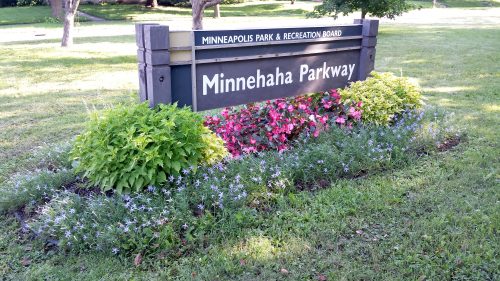 The reason I had to probe 29th Avenue toward the creek from each side is that it has no bridge, an unusual circumstance in this area. Generally the avenue crosses either on a full automobile and pedestrian bridge, as on Nokomis, or at least a pedestrian-only bridge, as I now experienced on 30th Avenue. Looking over the railings, the creek was turbulent downstream but glassy upstream. Had my Less Pedestrian Half been along, we surely would have played a game of Poohsticks. 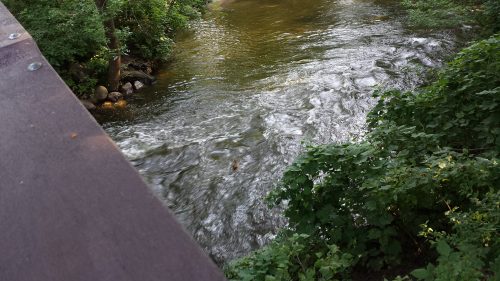 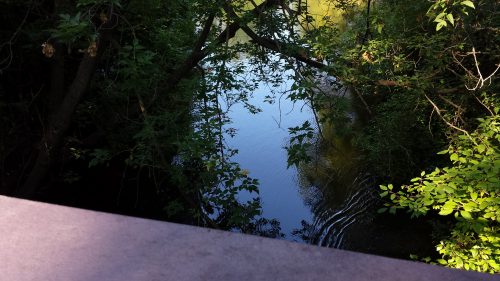 I only took 30th Avenue as far as 45th Street, at which point I turned east. Crossing 34th Avenue, I saw another traditional streetcar retail node, continuing my observations from the prior day. (The line that ran east on 42nd Street from 28th Avenue turned south again on 34th Avenue.) Because the main retail frontage is along 34th Avenue, it will have to wait for my final day in the neighborhood, when I’m slated to walk that segment. However, I couldn’t resist photographing the decorations atop the corner entrance. 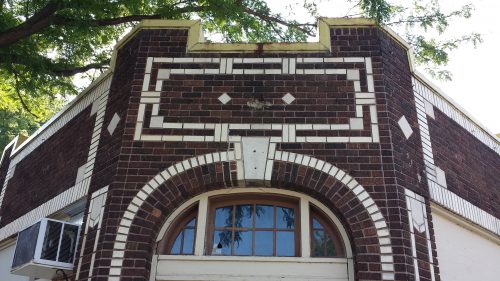 A block and a half further, after crossing 35th Avenue, 45th Street reaches a dead end, at least for automotive traffic. For pedestrians, there’s a quite unobtrusive path extending from the cul-de-sac to slip at angle through a gap in the tree line and fence. A small sign quietly announces that this is the entrance to the 46th Street Station of the METRO Blue Line. Once through the fence, it becomes clear that this is also a major station for buses (including the A Line) and a site for some recent mixed-use development, which I’ll visit on day 3. 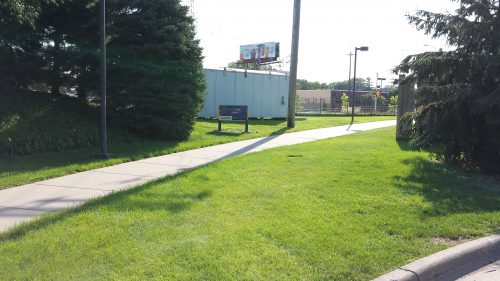 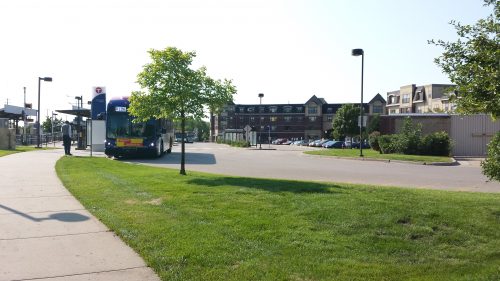 For the present walk, I crossed the light rail tracks at the station and turned north on the trail running along Hiawatha Avenue, the eastern edge of the neighborhood. I walked that all the way to the northern border, where I turned west on 42nd Street.

The first few structures on 42nd Street are houses, but then much of the 3100 block, including the corner with 31st Avenue, is another traditional retail building. This too would have been on the 34th Avenue streetcar line. Of the smaller, non-corner storefronts in this building, I was particularly interested by the one containing Sandbox Theatre, a company I had until then been unaware of. (Minneapolis has such a wealth of theater that I keep finding new gaps in my knowledge.) I’ve noted in my calendar their upcoming production of In the Treetops, October 6–15, 2017. Of more immediate significance, I noted Chicago’s Taste Authority on the corner for a visit at the end of the walk. 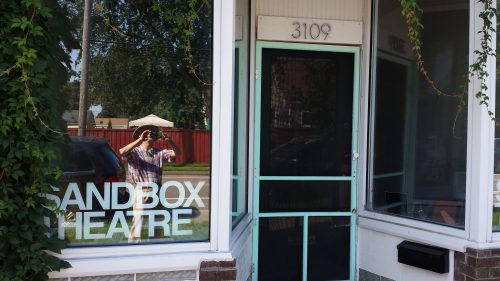 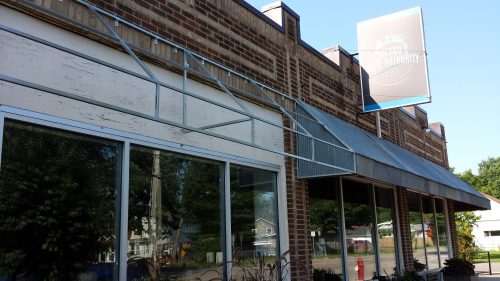 Walking south on 32nd Avenue put me in the unusual position of passing between two schools on the 4300 block. To the east of 32nd Avenue is the St. Helena Catholic School, which I plan to include in my report on day 3, when I’ll walk along its main face on 44th Street. (Likewise, I’ll include the associated church and parish office building, which face onto 43rd Street.) On the west side, the entire block between 43rd and 44th Streets and 31st and 32nd Avenues is occupied by a public elementary school building and its associated schoolyard.

This elementary school building, dating (aside from later additions) to 1916, is the the source of the neighborhood’s name. Indeed, even the two portable classroom units used from 1912 to 1916 were named John Ericsson School in honor of a Swedish-American engineer.

Alongside the original three-story section, a one-story wing on 31st Avenue was added in 1952. It is primarily visible in the photo below through the horizontal blue stripe of roofline fascia at the left. There’s also a chamfered, tiered, multistory section where the two main parts meet, which appears to be yet more recent.

Further complicating matters, the original Ericsson school program closed in 2005 and the space in the building was reused to house the Northrop Urban Environmental Learning Center, which retained its name from when it was housed in the Northrop school building, one neighborhood to the west. That building in turn was re-used to house the Hiawatha Leadership Academy Northrop, a charter school. 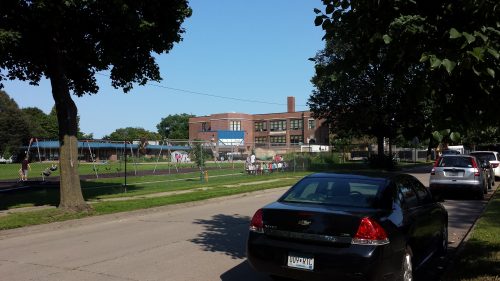 The remainder of my walk took me south to Minnehaha Parkway on a combination of 32nd, 33rd, and 34th Avenues and then back north again on 31st. I continued to see the neighborhood’s characteristic mix of houses, which reflects not only the varying times of their construction but also what has happened since. Some houses show minor remodeling, others more extensive. The extreme case is exemplified by a house in the 4600 block of 33rd Avenue South, where all that remains of the 1938 original is the foundation; everything above that was built in 2013. 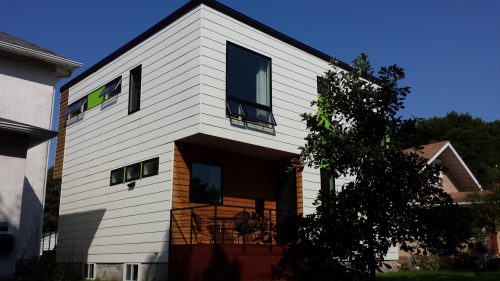 Finally, upon arriving back at the corner of 42nd Street East and 31st Avenue South, with only a block to go before I caught my bus home, I stopped in at Chicago’s Taste Authority, which I had previously seen from the outside.

Inside, the look of the place is much like a sports bar, with multiple TVs playing. However, the distinguishing feature is its devotion to Chicago, not only in decor but in menu. They feature Chicago-style hotdogs, Chicago-style Italian beef sandwiches, etc. I wouldn’t mind trying those, but this day I was in the mood for an Italian sausage sandwich. Although I grew up thinking that an Italian sausage had to be smothered in red sauce, I have since learned the joys of a brighter topping with giardiniera, so that’s what I ordered. (The restaurant offers both options, as well as others.) As expected, the sausage’s fennel-spiced porky richness was accented by the acidity and piquantness of the vegetables. A crisp B-Side Pils on draft from Indeed Brewing Company completed my refreshment. 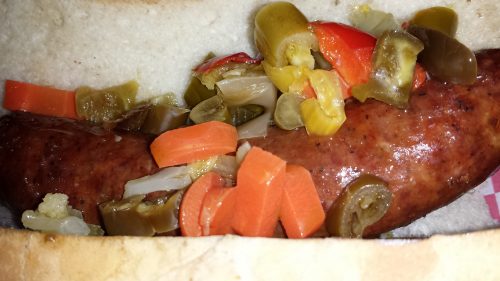 Editor’s Note: Max Hailperin is walking each of Minneapolis’ 87 neighborhoods, in alphabetical order. He chronicles his adventures at allofminneapolis.com, where the original version of this article was published September 2, 2017. We’re sharing them here at streets.mn.