The Fulton neighborhood’s northeast corner is in Lake Harriet. Rather than wait for the lake to freeze, I started on the shoreline path at 47th Street West. The dark blue lines in the following route map show the main loop I took back to that spot, aside from one detour I took around a temporarily closed block. The red lines are forward-and-back spurs off the main loop, and the blue tint shows the full neighborhood, including the northwestern part I walked the previous week and the southern parts that are left for later.

Every bit of Lake Harriet’s shore is distinct. If one isn’t trying to stay within a neighborhood but instead circumnavigates the lake, one experiences a three-mile-long string of landmarks, one after another: specific beaches, benches, bushes, and whatnot. Even in the short stretch of shore from 47th Street to Penn Avenue, I experienced at least three whatnots. First, at 47th Street itself, there was a lookout over the lake with a view of fishing pier number 2. Then, at Thomas Avenue, there was a wooden bridge. To me it appeared to have only a culvert and some opportunistic plants under it, but on an earlier walk, I was assured a troll also lives there. And then, near the base of the Queen Avenue stairs, there was Mr. Little Guy’s tree. More on that in a bit. 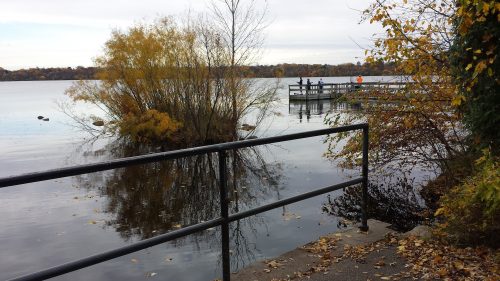 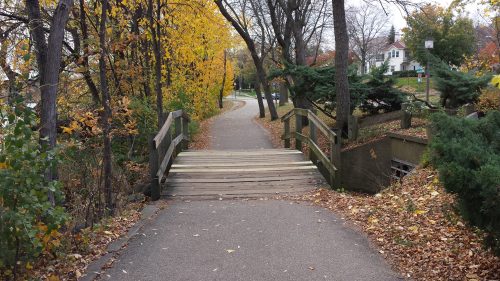 Since 1995, there has been one specific tree with a little door at its base that draws a steady stream of kids. Mr. Little Guy never shows himself to his visitors, but if they leave notes for him, he writes back—the perfect pen pal. Or at least that’s the way in works in the summer. The area outside the door now is crowded with non-epistolary offerings, and the door itself is locked shut, but thankfully has a forwarding address posted. 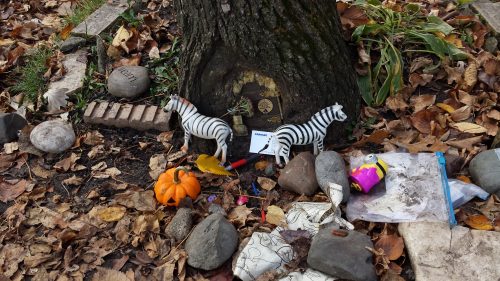 At Penn Avenue, I turned away from the lake. That’s not such an easy thing to do, as that part of the shore is rimmed by a steep bluff. The first flight of stairs, up to the bicycle path, isn’t so bad, but the one from there to the road reminded me of a ship’s ladder. Even my small feet (men’s 7.5, women’s 9.5, European 40) wouldn’t fit on the tread. 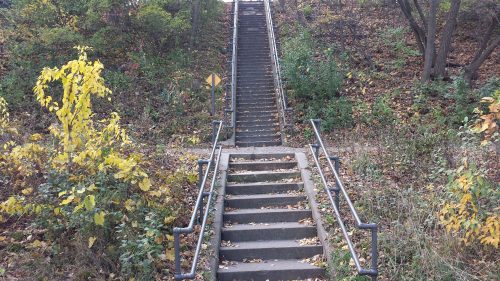 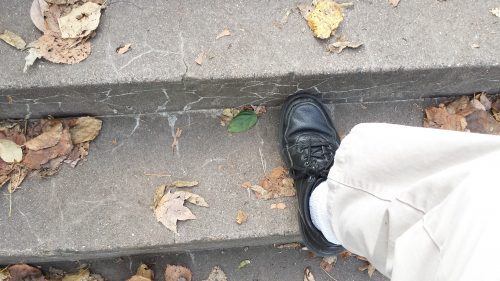 Once up at road level, I initially walked the spur down Penn Avenue to 49th Street and back. Many of the houses in this area are quite traditional in style, but that made the exception even more interesting. It’s undergone some changes since its 2013 sale, such that it no longer entirely reflects the architect James Stageberg’s vision, but it can still be numbered among the monuments to his genius. In addition to designing it, he lived there together with Susan Allen Toth, author of No Saints Around Here: A Caregiver’s Days and other books. 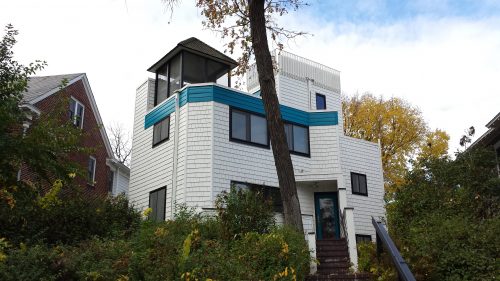 This is a season of color changes, and not just for trees. The house on the southwest corner of Penn Avenue and Lake Harriet Parkway has an ivy-covered wall, and the southern exposure had turned an autumnal red, in contrast to the green facing east. 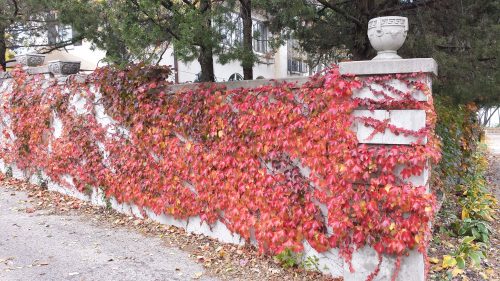 From Penn Avenue, I followed the sidewalk along Lake Harriet Parkway to the idiosyncratic arc where Sheridan and Thomas Avenues reach the parkway. Essentially this retraced my earlier steps, but this time on top of the hillside rather than at its base. As I walked northwest, the elevation progressively diminished so that by Sheridan, the parkway was level with the shoreline path, and the separate sidewalk ended.

After walking around the arc and back, I turned south on Sheridan. Once again, most of the houses were traditional in style, but again there was an interesting exception, this time not of such recent construction as the Stageberg house. The houses in the photo below were built only two years apart in 1920 and 1922, but in contrast to the lefthand one’s evocation of an earlier century, the one at right reflects the more current prairie school. 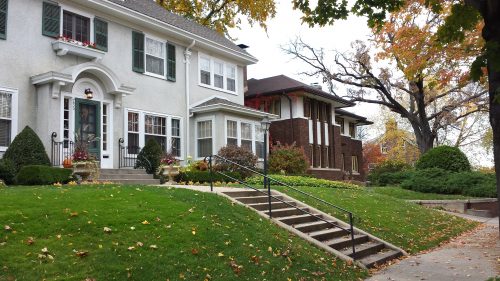 My planned route was south on Sheridan to 50th Street, then back north on Russell Avenue. Unfortunately, the 4900 block of Sheridan was closed for some large-scale tree work. The crew had blocked the sidewalks as well as the roadway, and from the size of the crane they were using, I decided to take the safety precaution seriously. After detouring on 49th Street to Russell, I walked the 4900 block of Russell and the Russell-to-Sheridan block of 50th Street as a forward-and-back spur before resuming my intended path northward on Russell. Along the way, I saw an adorable toddler driving a miniature car on the sidewalk, but photos of kids are a privacy no-no, so you’ll have to take my word for it.

I had previously passed through the T intersection of Russell Avenue and Lake Harriet Parkway as I walked the parkway from Penn to Sheridan. Now I returned to that same intersection on Russell, turning onto the parkway back toward Queen. Readers unfamiliar with wandering around in twisty loops might not appreciate the value in seeing the same intersection again from another direction. It isn’t just an unavoidable consequence of traversing all the streets. The same tree can look entirely different when viewed from a new perspective, silhouetted against the sky. 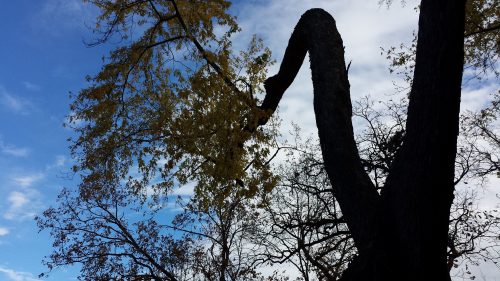 From the parkway, I took Queen Avenue south to 50th Street, where I turned east toward Penn Avenue. This is a major commercial node. Businesses on the north side of 50th include Marathon Sports, Nu Look Consignment, and a dental clinic. Most importantly to me, however, they also include Broders’ Cucina Italiana, my lunch stop. The south side has Urban Cycle as well as the cucina’s younger sister, Broders’ Pasta Bar, which is on the corner, facing Penn.

Molly and Tom Broder opened the cucina in 1982. As their children have entered the business, so too on the customer side of the counter—children who came with their parents in the 1980s are today returning with their own children. The informal atmosphere and value-oriented menu of pizza, pasta, salads, sandwiches, and soups are made for families. A lot of the business is take out, but there’s also some seating.

Having sung its praises as family friendly, I have to say that I also enjoyed my solo lunch. In the short interval while my rigatoni with ham and butternut squash cooked, I snacked on the anise-flavored browned goodness of a pizzelle. The rigatoni (a special) was tossed with an herbal cream sauce and accented with a topping of toasted bread crumbs and parsley. All very tasty. Leaving past shelves of gourmet Italian ingredients, I paused to photograph one bread item in particular, the Fulton Flatbread, not just because of its name, but also because it is my ideal cracker: crisp, bubbly, and browned, with just a touch of oil, salt, and pepper. 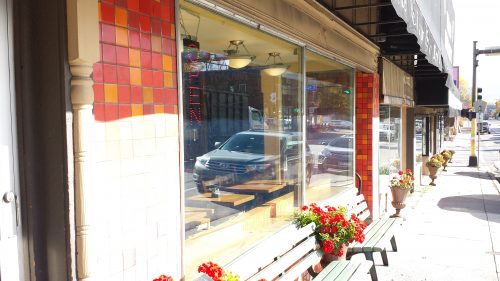 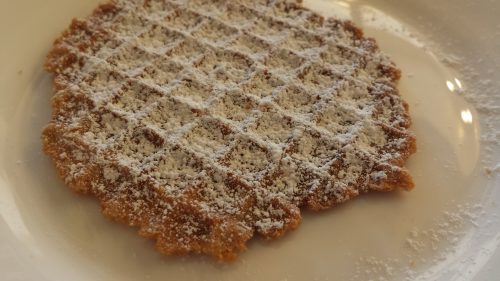 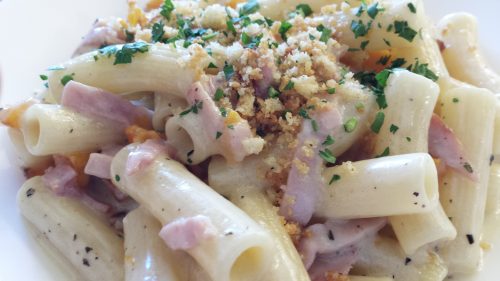 Rigatoni with Ham and Butternut Squash at Broders’ Cucina 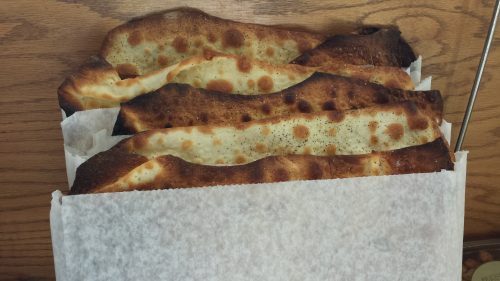 After this lunch stop, I took Penn Avenue to 49th Street and then followed 49th all the way west to Abbott Avenue, the western edge of this day’s region. For those who share my interest in street names, this means the walk just barely spanned the boundary between two alphabetic sequences. The eastern part of Fulton from Penn Avenue to Zenith Avenue falls into the Aldrich-to-Zenith sequence, whereas the western part from Abbott Avenue to France Avenue falls into the Abbott-to-Zarthan sequence.

Among the sights along 49th Street were Dharma Field Zen Center, on the northeast corner with York Avenue, and the Southwest High School Stadium, on the north side between Zenith and Abbott. (The school itself is a few blocks away, just outside the Fulton neighborhood.) 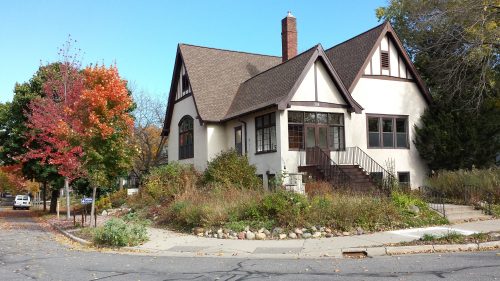 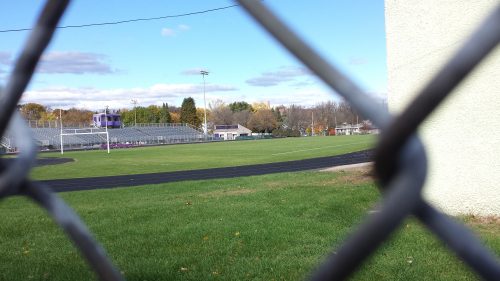 At Abbott Avenue, I started more slowly working my way back eastward by looping through a succession of pairs of avenues: Abbott and Zenith, Xerxes and York, Vincent and Washburn, and Thomas and Upton. In each case, the looping also involved blocks of 47th and 50th Streets, whereas the forward progress from each loop to the next was on 48th Street.

At the northern end of the second loop, as I turned onto York Avenue from 47th Street, I saw another illustration of the neighborhood’s turnover. A modern house from 2008 stands out from its neighbors. The single-family houses to its left are exactly a half century older, dating from 1958. To its right, on the corner lot, we have a side view of an even older (1953) duplex that faces 47th Street, the rambler style with garages in the middle. 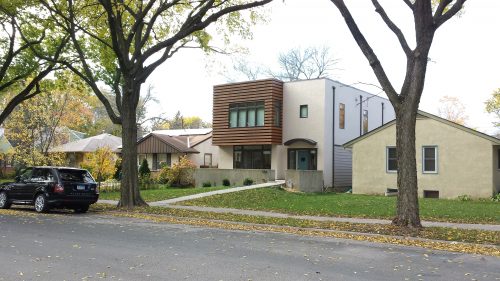 York Avenue took me from 47th Street to 50th, which was my connection back to Xerxes Avenue. The intersection of 50th and Xerxes is a major commercial node with a mixture of older and newer buildings and businesses. On the southwest corner, Michael’s Lamp Studio is a long-standing fixture in the neighborhood. Their building dates to 1940 and signage on the Xerxes Avenue side indicates the studio has been in business since 1972. 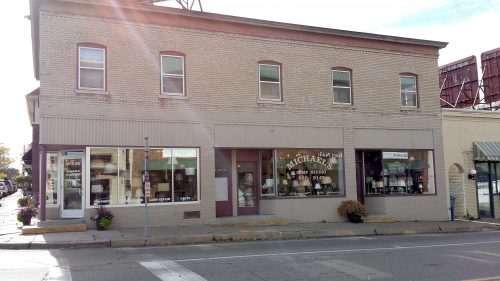 The northwest corner has a much newer (2005) mixed-use building, some of the signs from which you can see reflected in the lamp studio’s windows. Just north of it one steps back again in time to a 1923 building—although the building itself is lost amidst the riot of stuff that is Hunt and Gather, a vintage shop that postdates its building by 80 years. 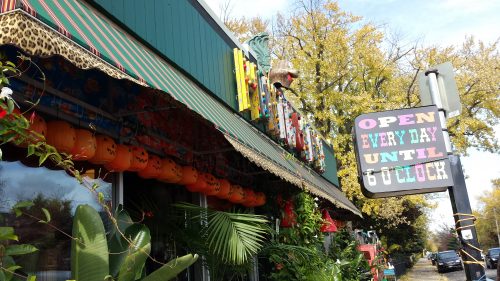 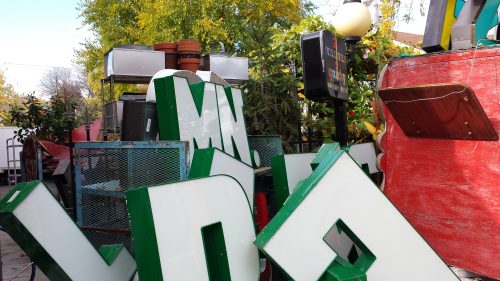 Just after I crossed Washburn Avenue on 48th Street, on my way to Vincent Avenue, the breeze that was blowing that day did a good imitation of a phantom rider on the zipline strung between two boulevard trees. 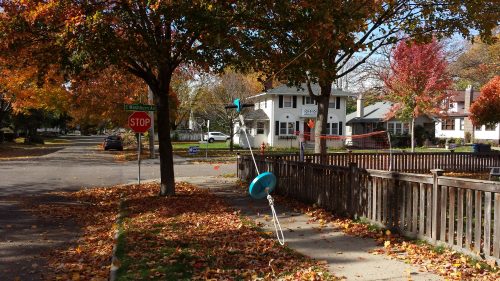 Tudor-style stucco houses from the 1920s are relatively common in this area, but most of them are only one-and-a-fraction stories high, as opposed to the example I saw in the 4700 block of Washburn, which is stretched vertically to accommodate two full stories, with the half timbering on the facade framing the stair-stepped windows. (I suspect that the gable area over the windows, now shingled, was originally also a half-timbered area of stucco.) 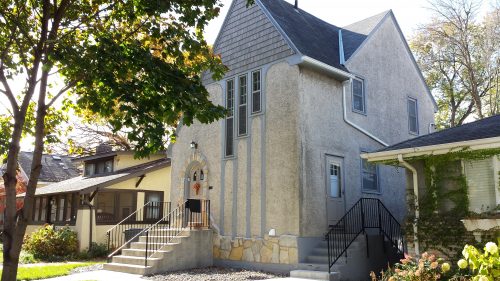 A couple blocks further south on Washburn, in back of the 50th Street shops, the Lake Harriet House of Music has a jazzy, musically themed mural on what otherwise would be a boring white cinderblock wall. 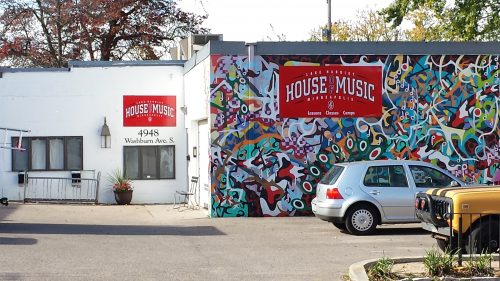 The east side of that block of Washburn is occupied by a school building and its grounds. Indeed, it fills the entire block from Washburn to Vincent Avenue and from 49th to 50th Street. The signage facing 50th Street indicates that it was opened in 1915 as the Fulton Elementary School and now is the Upper Campus of the Lake Harriet Community School. The building itself reflects this history; parts were clearly added at various points since 1915. One place the original identity remains is on the east side, where the lintels over the entry doors are inscribed “Robert Fulton School.” That’s the missing link between the engineer and the neighborhood (and the flatbread). 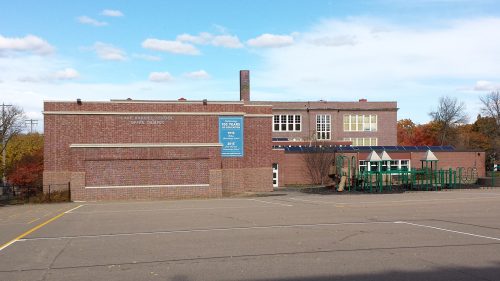 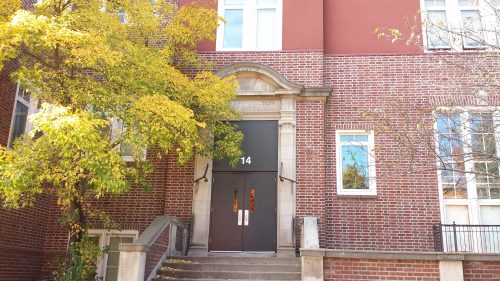 Turning from Vincent Avenue back onto 48th Street, I spotted a set of gel keys hanging from a fence in front of what are apparently Hosta ventricosa Aureomarginata. So, if you know the teething youngster who lost them, this is the place. 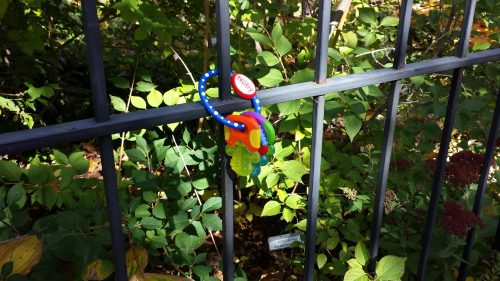 North Side of 48th St. W. Between Vincent and Upton Aves. S.

Those keys are just one example of the details one sees walking on foot rather than zooming by in a car. Another would be the stacks of rock on a front yard retaining wall at 48th and Thomas. I’m sure there will be more when I return to see what is further south. 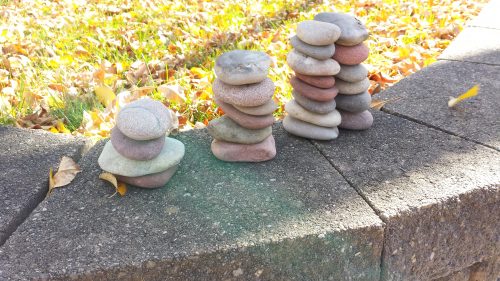 Editor’s Note: Max Hailperin is walking each of Minneapolis’ 87 neighborhoods, in alphabetical order. He chronicles his adventures at allofminneapolis.com, where the original version of this article was published October 27, 2017. We’re sharing them here at streets.mn.

1 thought on “Walking All the Streets of Northeastern Fulton”