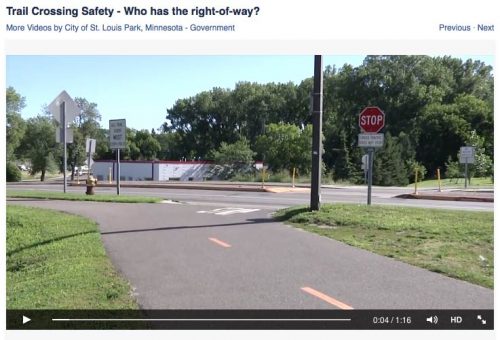 I was disappointed to hear that a friend of mine got a bicycle ticket the other day in Saint Louis Park.

The $62 ticket was given by an officer for not stopping at a stop sign at a very problematic intersection, where the Cedar Lake bike trail and Beltway Boulevard intersect right near Steel Toe Brewing and Bass Lake.

So it was this past Saturday. I was riding from Minneapolis out to Wayzata, and at the first Greenway crossing where Minneapolis turns into SLP, I’m not exactly sure, the first big crossing right after you cross the railroad tracks coming from Uptown.

It’s the Belt Line, and it’s a crossing in know pretty well. I know that a lot of the time, if its not clear, you end up waiting there for over five minutes because the traffic is so aggressive. People drive really fast, and the sight lines are really poor for people driving to see people crossing the trail.

Moments later a police car that was idling next to the trail turns the siren on and follows me onto the trail. He  gave the ol’ horn and pulled me over, and gave me a spiel about why he was pulling me over. How they frequently do stings there. Apparently they get a lot of complaints about people blowing that stop sign, and it’s led to them doing trail stings there to find people that don’t stop at that stop sign.

He said they also fine drivers who don’t stop for bikers or pedestrians, there but I didn’t stick around to see if that was true.*

I got a 65 dollar given and a five minute lecture and I was on my way.

It was a little bit of a bummer, but I am privileged enough to not be someone for whom a $65 fine is gonna stress me out a ton. It was an inconvenience, but did not not really put a damper on the the day. It did feel silly, but I think technically I was breaking the law, so I can’t really fault the guy.

It just seems like a waste of resources or whatever.

It seems like an innocuous story, but there’s a lot more going on here. 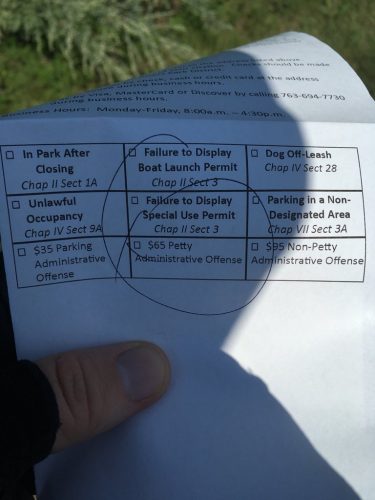 This is an important intersection and probably the #1 spot used by people riding bicycles in all of Saint Louis Park. Yet despite heavy use by people on foot and bicycle, Saint Louis Park has not made this a safe crossing for these vulnerable road users. And judging from this story, the city is only making it worse with a lost-cause enforcement approach that will not solving any problems.

This intersection, where a busy recreational trail crosses an arterial road, has already been the subject of many previous posts.

For example, you can read about this in an article I wrote for Minnpost back in 2015:

The end result is a confusing mishmash, and there have been a slow but steady stream of nonfatal accidents. The latest mishap occurred last week, when a diagonally traveling bicyclist broke an ankle.

“Without question, it’s less than desirable,” Tom Harmening, the St. Louis Park city manager, told me. “Some time ago there was a crosswalk there, but we removed that. Our City Council and staff, along with the Three Rivers [Park District] have discussed this crossing a number of times. We’ve brought in consultants to look at the design options, and most recently made some changes 2-3 years ago that resulted in current configuration, adding a refuge and a curve.“

For someone walking or riding on the trail, questions about right of way are irrelevant. The only thing that matters is whether the oncoming car is going to stop for you. That’s one reason that, for bicycle advocates, the answer to the St. Louis Park problem is to either clarify the state law or change the street design.

Or again in an article here on streets.mn by Sean Hayford Oleary:

For anyone who’s ridden these trails, it’s clear that the methods aren’t just callous to the needs of pedestrians and cyclists — they’re completely ineffective. In my experiences, well over 90% of bicycles roll through the trail stop signs. Riding the N Cedar Lake Trail a few weekends ago, I did not see a single cyclist or pedestrian come to a complete stop at any of its many stop signs. So it’s clear that St. Louis Park’s methods to improve safety are questionable, and probably ineffective. But are they legally based? For cyclists, this is a sticky question I won’t get into at this point. But for pedestrians, the answer seems to be a resounding “No.”

One key takeaway here is that, by launching a legally dubious and dangerous campaign to claim that this crossing is not a crosswalk, Saint Louis Park is making a bad situation worse. 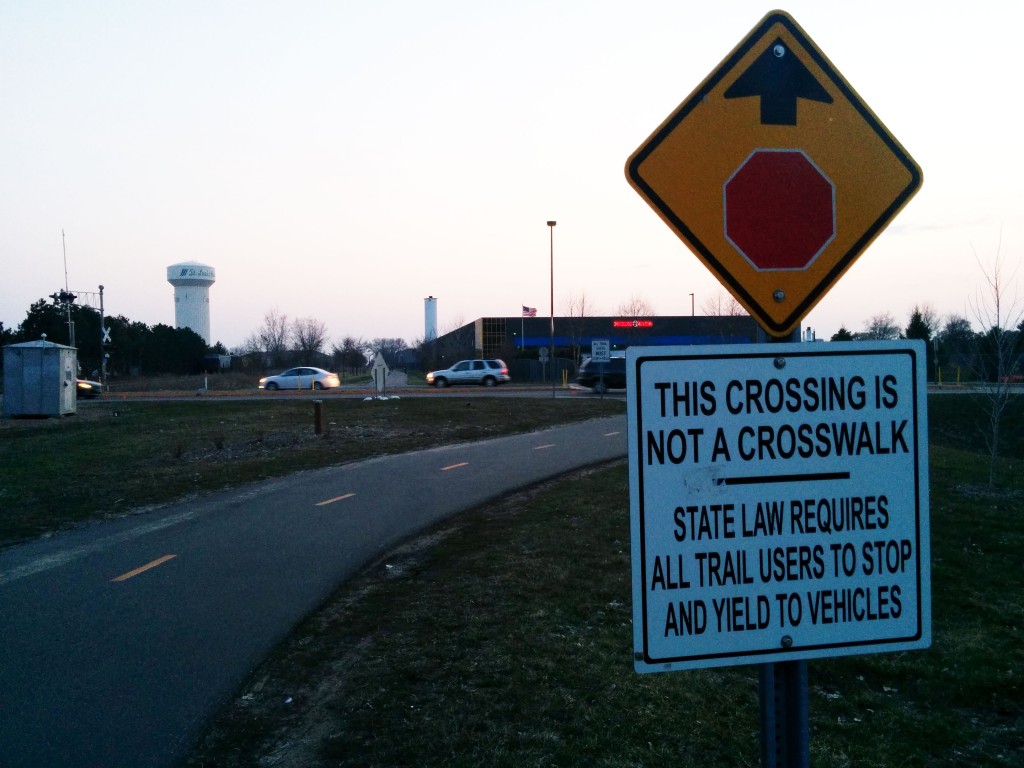 And by adding bicycle tickets to the mix, the unenforceable and counter-intuitive “solution” that Saint Louis Park seems to be adopting is only going to discourage and depress bicycling in the city. Given the public health and environmental health needs we face, that is a shame.

As Bike Alliance of Minnesota deputy director, Nick Mason, wrote in a comment (quote in Sean’s piece above):

If our answer to safety is that people with limited mobility have no right to cross a less-than-safe roadway, we need to pause and consider that it’s inherently problematic. By removing those crossings [St. Louis Park] didn’t increase safety; they decreased their liability.

The vast majority of people riding bicycles on this trail are going to do what’s best for their own  safety, which means venturing forth into the street and navigating the intersection as best they can despite Saint Louis Park’ dubious stop sign. The end result is that the status quo pushed by the City of Saint Louis Park does nothing to help these people or make anyone safer.

A real solution might be installing a HAWK signal, some kind of a crosswalk and officially granting bicyclists and pedestrians the right-of-way. This is the only way to make it clear to motorists how to slowly proceed, and to ensure the safety of everyone who uses these public streets and trails.

Instead, the city is pushing an ineffective and counter-intuitive enforcement campaign that will not change behavior, does not make anyone safer, and will only undermine the physical and financial security of people trying to get around on bicycles.

You don’t have to feel bad for my buddy who got the ticket (or others just like him), but you should be angry that the city of Saint Louis Park is ensuring that safety is not a priority on their bike and pedestrian trails.

* On top of that, it seems like the officer in question is not aware of the law that the city is (backwardly) trying to enforce, as the city has tried to make it clear that people using the trail do NOT have the right-of-way. (For example, check out this video.) Keep in mind that the actual legal claim there is questionable. Click on the above articles for more info about the relevant statutes.