The strip of the Hiawatha neighborhood between 46th Avenue South and the river is distinctly different from the portions I walked on my first and second days. That’s especially true of the northernmost two sections visible in the route map, each of which was developed later than the main grid of the neighborhood. Between 40th and 42nd Streets East, the dense collection of curved streets named for University of Minnesota presidents is the Luella A. Anderson addition, held in trust by the university until 1959 and then sold to the developer Marvin H. Anderson, who named it for his wife. Between 42nd and 44th Streets, the big empty space on the map holds a Minnehaha Academy campus and the Becketwood senior-living cooperative. South of 44th, the neighborhood’s normal character re-emerges but is influenced by the parkland along the river and to the south, as well as by the Intercity Bridge.

Because of the Luella A. Anderson addition’s late development, it possesses a characteristic collection of architectural styles, also described by Andy Sturdevant. As in 1960s suburbs, many of the houses are split-level or split-entry designs with integrated front-facing garages. These are decorated in a variety of styles, ranging from colonial revivals to modern cedar siding. I’ve got an example photo at the very end of the walk, when I returned to this area. However, other houses have more distinctive modern designs, such as the two shown below, which I saw as I turned from Folwell Drive (part of the route’s main blue loop) onto Coffey Lane (one of the red spurs). [Note added 2018–04–29: I subsequently realized these two are actually in the Howe neighborhood, which includes the north side of these streets.] 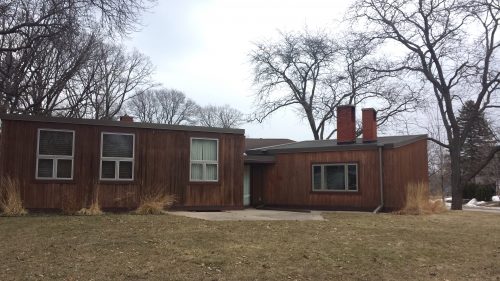 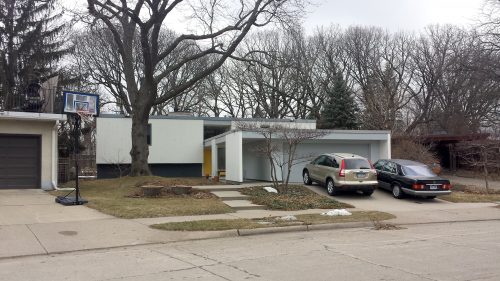 A few of the houses have garages facing to the side rather than the front; I view that as an intermediate step that recognizes the garage’s utility but isn’t willing to concede the main facade to it. And others even still have detached garages, as with the following house, which would be at home in the older part of the neighborhood not only for that reason but also because of its one-and-a-fraction-story design. 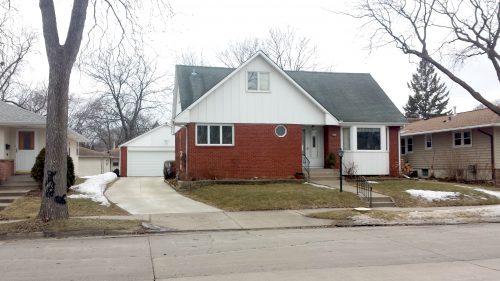 Somewhat further south on Morrill Lane, I passed the tee intersection with Northrup Drive, where I would eventually turn east once I had followed Morrill Lane to 46th Avenue as a forward-and-back spur. The northeast corner of the Northrup Drive tee stands out for its cheerful, artistic assemblage of objects including painted clay chimney liners. 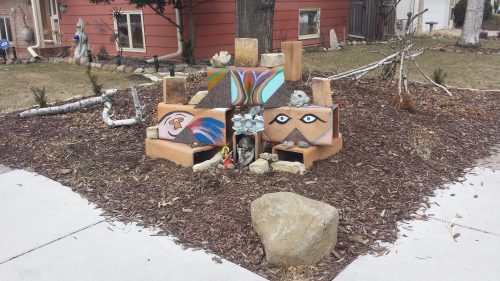 After mostly running north-south, Morill Lane turns westward to tee into 46th Avenue. This east-west portion of the lane runs behind St. Peder’s Evangelical Lutheran Church. This provides access to the church’s rear courtyard, which contains a sculpture by Nick Legeros entitled Sovereign Son. I’m grateful for his permission to include these photos. 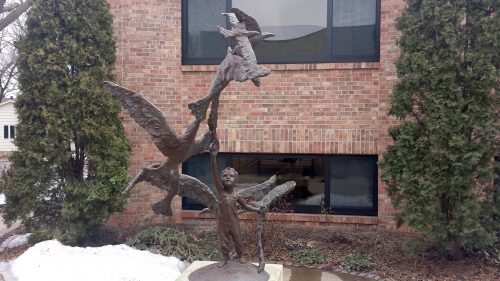 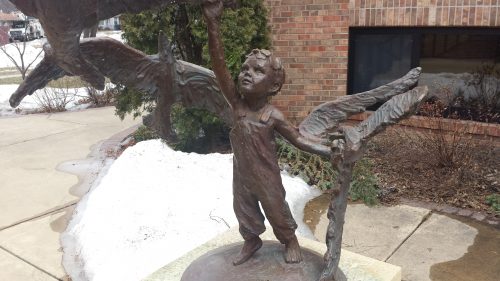 From the courtyard, I could have gotten to the front of the church by walking a couple hundred feet south on either the driveway or 46th Avenue. But my route called for me to go the long way around: retreat up Morrill Lane to Northrup Drive, walk two blocks east on Northrup, backtrack out of the second of them, then south on Burton Lane to 42nd Street, another one-block eastward spur on 42nd Street, and finally westward to the front of the church. Of course, all that extra walking has its rewards. In particular, the eastward spur on 42nd Street gave me a good view of Minnehaha Academy’s Lower and Middle School, which occupies the site previously used by the Breck School. The same campus also includes a barrel-vaulted ice arena. 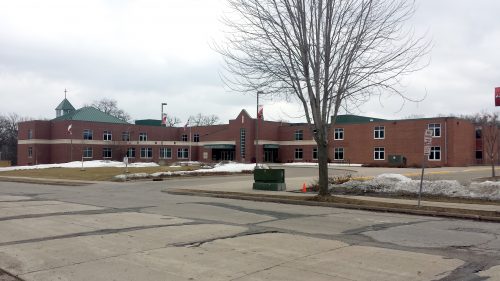 The church sits on the northeast corner of 42nd Street East and 46th Avenue South. The most complete view is from that intersection, but I’m partial to the perspective as one approaches from the east. As the photo below shows, this accentuates the dynamic tension between the components. The front doors display another Legeros sculpture, Evangelical, again reproduced by his kind permission. 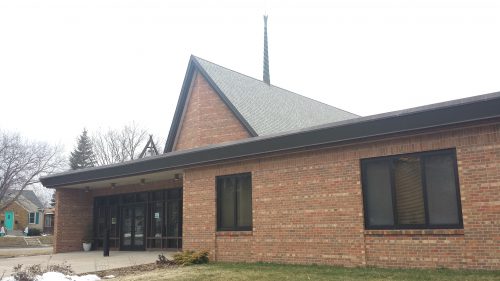 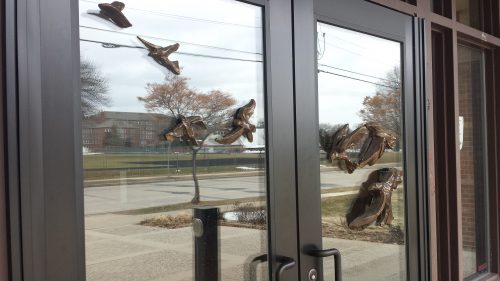 Turning south on 46th Avenue, I was struck by the contrast between what I had been seeing to the east and the older dwellings lining the west side of the avenue. For example, although I took the next photo for sake of the hands on the boulevard tree, in the background you can see the duplex at 4220–4222, which looks quite typical for its 1931 date. (The house on the left is actually somewhat older, 1925, but its appearance is less well preserved.) 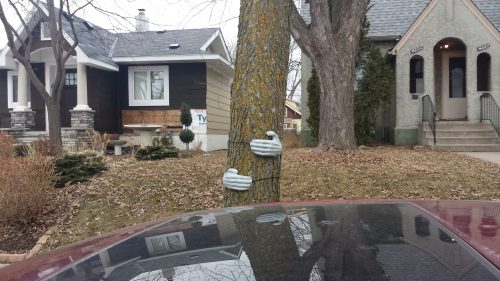 As a quirk of how I divided the neighborhood into days, I also temporarily ventured even further west by taking a C-shaped spur on 43rd Street, 45th Avenue, and 41st Street. Not surprisingly, these blocks look a lot like their neighbors I saw on the first two days. Once I was back from there, I continued skirting the western and southern borders of the Becketwood property. Frustratingly, the one historic building on that property, a 1922 chapel, is barely visible from the perimeter. This disappointment quickly faded once I turned south on 47th Avenue. True, this is back into the neighborhood’s main grid. But details are everything, and in the space of two blocks, I saw an enchanting pair of rose-adorned railings and a hauntingly silhouetted tree. 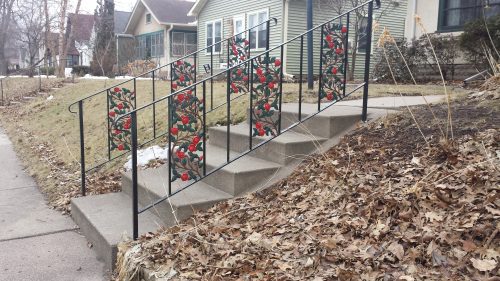 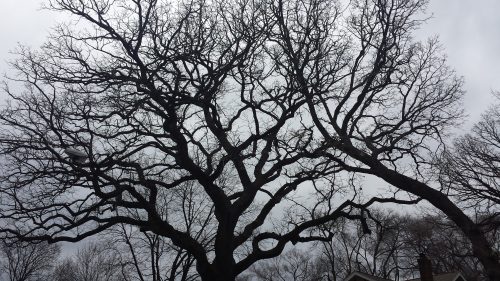 The southern terminus of 47th Avenue is a tee intersection with Edmund Boulevard. Before continuing my main loop eastward and northward on the boulevard, I turned westward for a spur. Initially that spur brought me to the rather complex intersection of Edmund Boulevard, 46th Avenue, and 46th Street. For pedestrians, Nawadaha Boulevard also comes into the mix. I turned the hairpin onto eastbound 46th Street, went out to the midpoint of the bridge, enjoyed the view—the blustery weather less so—and hurried back to the intersection. As I neared it, I was interested to see an example of “transit-oriented development” not being limited to light rail lines. The Parkway West Apartments, shown below, are situated at a station for the A Line, a Bus Rapid Transit service. 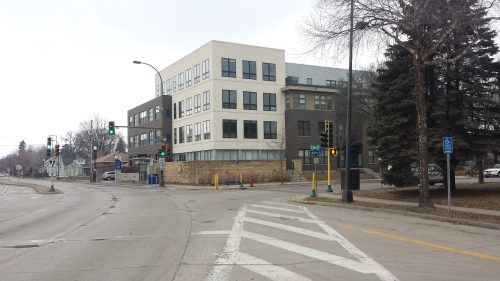 Even on the second to last day of March, spring flowers seemed a long way off. The good news is that the previous year’s growth still provided visual interest, as with these dried plants on Edmund Boulevard. 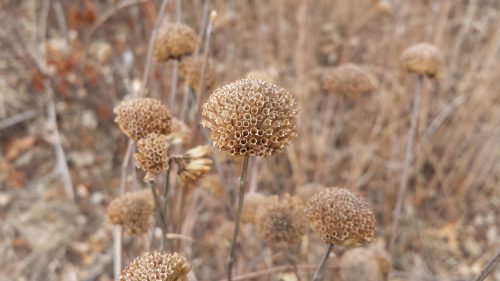 Continuing north on Edmund past 45th Street, one of the houses stood out as a good example of how a building can be made less bland by de-prioritizing historical coherence. There are plenty of arts-and-crafts houses with white stucco, bracketed eaves, and grouped windows framed with the same dark color as the eaves. This one gains some pop from the porch windows and even more so from the bright red door. That door, with its panel moulding and centered brass knocker, would look right at home on a colonial Georgian revival. Then again, that might be another way of saying it would be boring there—a door to walk past. Here, it signals a homeowner willing to mix styles to create a welcoming entryway. 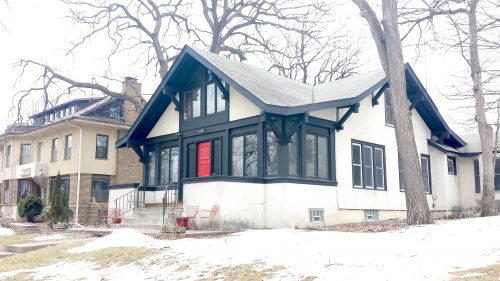 Although Edmund Boulevard runs quite close to the river, I was able to get closer yet by wrapping around to West River Parkway via 45th Street, 46th Avenue, and Godfrey Parkway. The West River Parkway runs as close to the river as the bluffs allow. (This area is part of the gorge created as the St. Anthony Falls retreated upstream.) Many spots along the parkway provide scenic overlooks, starting at the south end with this view of the bridge. 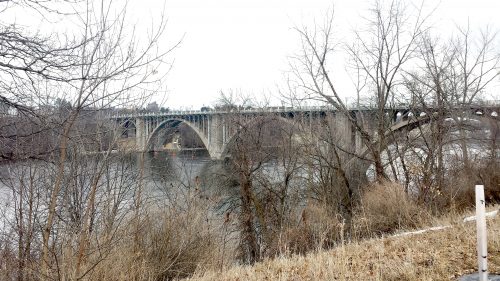 Once past 44th Street, the parkway runs in front of Becketwood, shown in the next photo. This complex was built in the 1980s, replacing the Sheltering Arms charitable institution, which was on the site from 1910 to 1983. During that period, it served first as an orphanage, then as a polio hospital, and finally as a school for the developmentally disabled. All three are described in an institutional history. From the parkway, the one remaining sign of Sheltering Arms is the pair of gateposts surrounding a walkway. Like the chapel, they date from 1922 according to Larry Millett’s AIA Guide to the Twin Cities. (Becketwood also has a modern driveway entrance further north.) 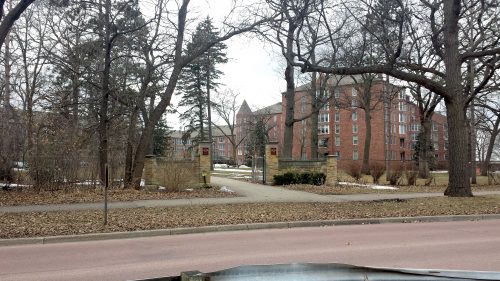 In addition to the paved pedestrian and bicycle paths along the parkway, there is another more rustic trail—the Winchell Trail—further down the slope. Some places it is just a little further down, other places more substantially. The two trails are connected in multiple places, such as at this WPA staircase from 1938. 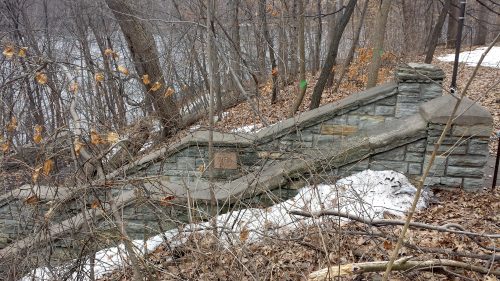 Mostly I continued along the parkway, but shortly after spotting a friendly bear, I did take in some of the gloriously undulating trail with its view out over the river. 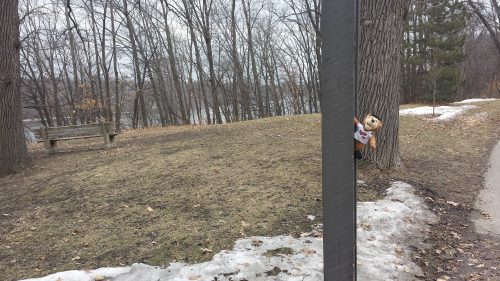 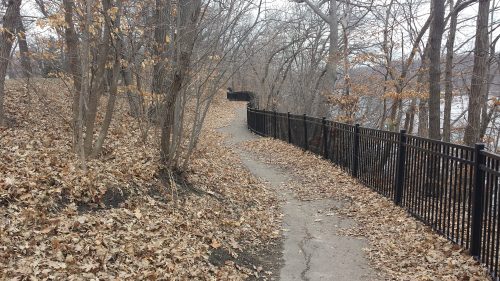 North of 42nd Street, Edmund Boulevard reemerges as a close parallel to the parkway. The west side of the the boulevard is lined with houses that look out toward the river; there are no houses on the east side or on either side of the parkway. Several of these houses continue the Luella A. Anderson addition’s embracing of modernism. In particular, I was very struck by the one pictured below, which exemplifies de Stijl, the Dutch modernist style. 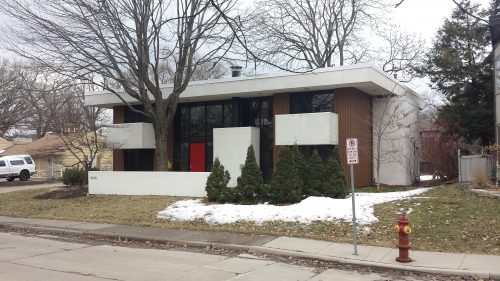 My regular readers will know that when I go walking, I’m not just looking at nature and architecture, but also geeking out over infrastructure. The manhole cover just south of the de Stijl house might catch anybody’s eye, however, even someone less prone to looking at manhole covers. Job seekers at companies such as Google have reportedly been asked why manhole covers are round. This one is hexagonal. 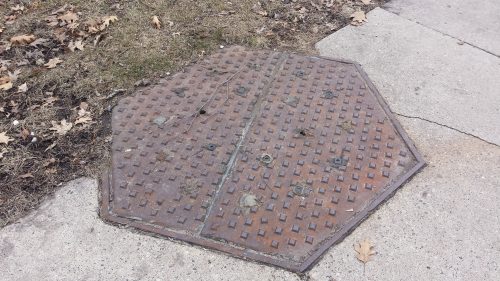 Returning to 42nd Street, I re-entered the main part of the addition and completed my loop using Coffman Lane, Northrop Place, and a bit more of Edmund Boulevard. At the start of the walk I promised a photo of one of the addition’s typical bi-level homes. As I turned from 42nd Street onto Coffman Lane, I saw a good example, distinguished not only by its cedar siding but also by the gecko over the garage. 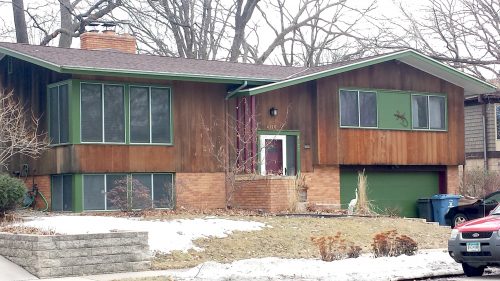