A couple weeks ago, I packed my bags and headed off to Boston for an annual gathering called YIMBYtown. I’m no YIMBY. I want everyone to have a safe, affordable place to live, and for that to happen we need to build enough homes to go around. (Yes, that includes apartments, like my own apartment-that-is-a-home.) I’m pro-people-having-homes.

I went to YIMBYtown in search of smart conversation with people working on similar problems in other cities. At the opening reception for the conference (which included a nun-themed drag show), I chatted with David Whitehead. I confessed my dislike for the YIMBY name; he responded that he liked it. We decided to explore the name together in an Unconference session.

Our submission made it into the program:

Title: Is YIMBY the wrong word for me? Let’s discuss.

Are you feeling at home here in terms of ideas, but struggle with the word YIMBY? Are you here because you LOVE the word YIMBY? Join us for a discussion about how you self-identify in this work, and why it matters.

After 45 minutes, I left the workshop liking YIMBY less than I did going in, which may not be a surprise. But, everyone else in the room (including David) did, too.

YIMBY is punchy, easy to say, and full of energy. It’s provocative. It’s action-oriented. It says, “I show up to say yes.”

What didn’t work for us?

Optics are important. Using YIMBY boxes the movement into someone else’s polarizing, yes-no framing. There’s no option for a third, win-win solution, even in this most complex and three-dimensional place of our communities. In accepting “the other side’s” framing without questioning, the movement loses control of the story. It lets the “no” folks define the terms of the debate. It leaves no space for pro-housing folks to write our own story.

It doesn’t reference the movement’s values or vision, which invites others to define them for the movement. YIMBY doesn’t acknowledge that our work is about people, and especially the most vulnerable people in our communities having affordable, safe, healthy homes. It doesn’t even name the issue we’re organizing around. A quick glance at the YIMBYtown schedule shows lots of sessions about building diverse coalitions, stopping displacement, housing trusts, equity, and (not listed) warmly welcoming an anti-displacement protest during a plenary. The event was mostly attended by people developing affordable housing, identifying as socialists, and advocating for racial justice. Attendees develop affordable housing, identify as socialists, and advocate for racial justice.

To me, the most damning critique is YIMBY’s blindness to the implicit white (and wealth) privilege in the movement’s name. If you say “Yes In My Back Yard,” you imply that you have a yard to share. You imply that you get to decide whether to share it or not. You assert that when you show up to a public meeting decision-makers will listen to you. This doesn’t represent most people active in the movement. Not only do many of us rent and lack a yard, a goal of our organizing is to remove the ability of powerful, wealthy homeowners to decide whether less wealthy, less powerful people have a right to housing.

There were plenty of smaller critiques, too. YIMBY is a tactic, not a movement. It’s a jargony acronym that presumes you know about NIMBYs and YIMBYs, what YIMBY is about, and why zoning matters. YIMBY is distancing when we need allies and to make it easier to understand what we’re fighting for. It’s provocative, but also awkward. It’s positive, but as you dig in a little more, it’s not so much positive as it’s a reaction to another set of advocates. And it’s literal — too literal. One workshop participant shared a story of trying to explain to a pro-housing friend that being a YIMBY didn’t mean she wanted someone to build homes in her literal back yard, but the vision of people living in her small woods stopped her from signing on as a new YIMBY.

I don’t know whether the people at YIMBYtown were representative of pro-housing people or not. I know that they aren’t representative of who is loudest about YIMBY issues on social media. I suspect that they haven’t thought deeply about the name they’ve chosen. I encourage pro-housing people to explore who we are, what we stand for, and whether we need a new name that conveys our positive vision. 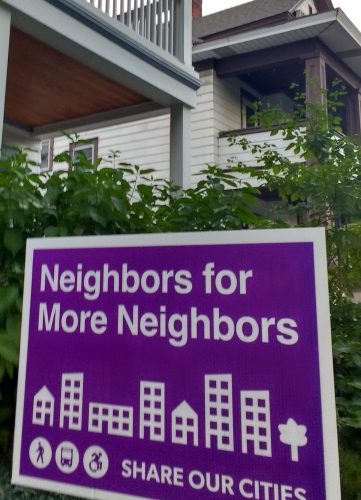 Here in the Twin Cities, we have Neighbors for More Neighbors. It began as an art project pointing out the often-absurd discussion about adding new homes in our neighborhoods. Recognizing the shortage of places to live in our region, n4mn took a cue from earlier project-specific successes. It’s morphed into organizing people to show up to say, “I’m a neighbor of this project, and I want more neighbors.”

Let me add something critical. n4mn would never say that building homes is enough to solve the problem. We need to invest in social housing. We need to pass and enforce REAL tenants’ rights. Without those things, we’ll never get to a world where everyone has a stable place to call home. The Twin Cities has great people organizing for tenants rights and funding for social housing. n4mn shows up in support of that work.

But of course, we also need to build enough homes to go around. As a not-YIMBY, I’ve signed on with n4mn, because dismantling covertly racist policies that make it illegal to build enough homes in desirable neighborhoods is necessary. Eliminating policies that make it more expensive to build homes is also necessary. Other Minnesota advocates aren’t leading on YIMBY-style policies, and n4mn is.

Here in the Twin Cities, I don’t have to wrestle with whether I’m a YIMBY or not. I can just say I’m a Neighbor who welcomes More Neighbors. That’s a name I love.