Minneapolis’s Keewaydin neighborhood includes much of Lake Nokomis. Both names come from the “cult of Hiawatha,” as do those of several of the streets. By walking the portion of the neighborhood to the west of 28th Avenue South, I included the parkland surrounding the lake. In the route map, the blue tint indicates the full neighborhood, the blue lines indicate portions that I walked once, and the red and purple lines indicate portions that I walked twice, forward and back again.

I began and ended at the intersection of 28th Avenue South and 50th Street East, the point marked A and B on the eastern loop. The northwest corner of this intersection is home to Nokomis Beach Coffee, a busy neighborhood hub located in a 1928 retail building of the kind typical for streetcar stops. 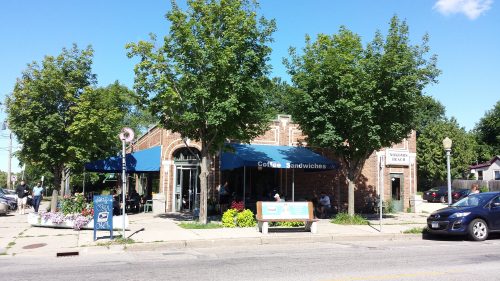 Proceeding north into the 4900 block of 28th Avenue, I primarily saw residential buildings, though I did spot one other small commercial space on the east side of the avenue. Most of the residences are single-family houses or duplexes, but there is also one six-unit apartment building from 1930. The photo shows it almost hidden in the trees to the right of a 1.5-story single-family house from 1928. 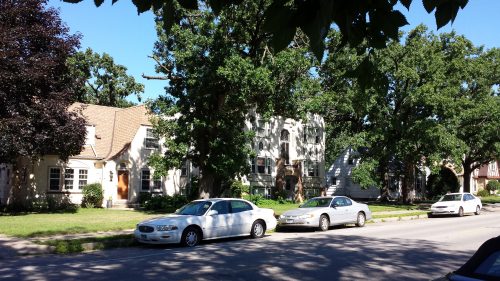 Many of the dwellings look like they date from that same time period and have been preserved without substantial changes. However, I photographed a disproportionate number of the exceptions. For example, on the spur north to Minnehaha Parkway via the 4800 block of Woodlawn Boulevard, I was struck by the distinctive appearance of a house. Although the core dates to 1926, it was recently extended and given a refresh with such modern elements as the windows. 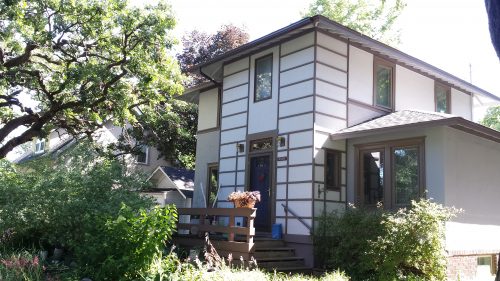 Continuing this spur onto the parkway itself, I got another view of the mixed land uses that predate current zoning. On the southwest corner with 28th Avenue, Mel-O-Glaze Bakery is another neighborhood institution; I plan to visit it when I walk that block of 28th. Immediately to its right in the photo (west on the parkway) are a four-unit, eight-bedroom apartment building from 1915 and a three-bedroom single-family detached house from 1916. 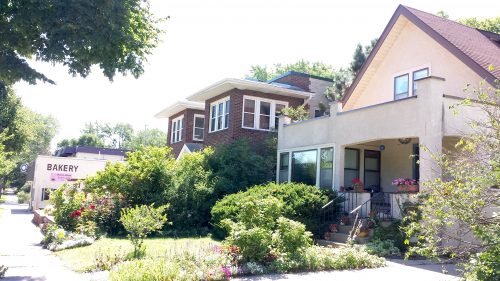 After this parkway spur, I returned south on Woodlawn Boulevard to 50th Street, where I entered Lake Nokomis Park at the Nokomis Naturescape Garden. A sign indicates that the garden is intended to provide a butterfly stopover, among other functions—a success, as documented by the photo. In addition to the coneflowers shown in the photo, the garden includes butterflyweed, milkweed, and even wild strawberries. 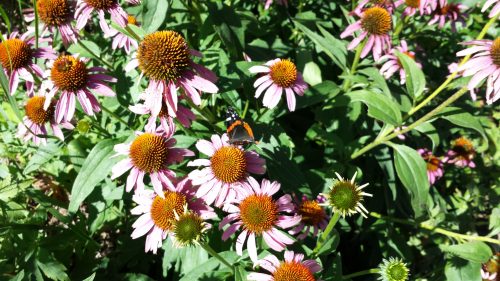 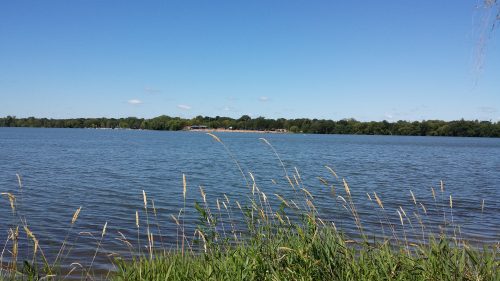 View Across Lake Nokomis from Naturescape Garden to Main Beach

At this point I left my route’s eastern blue loop to take the purple connector along the north shore of the lake to the western loop. After walking along the Minnehaha Creek and Cedar Avenue, I returned to the lakeshore near the Cedar Avenue bridge. In this area I encountered a number of seats provided by the Good Chair Project, starting with two that were looking out over the moored sailboats. As I described in East Isles, the simple premise of this project is that seats are more useful if they can be moved, for example into shade or to face someone else. 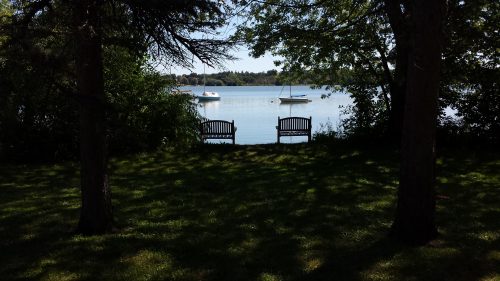 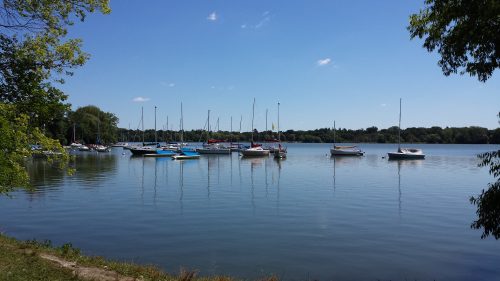 Immediately to the north of there, Sandcastle offers food and drink with seating overlooking the lake and the adjoining main beach. I enjoyed a bowl of the tangy shrimp and octopus ceviche and then a “dog flicker,” the quasi-namesake of chef Doug Flicker. The savory beef frank is enhanced with kimchee and a runny fried egg. (Thankfully, the beach’s shower building provided me a place to wash up.) 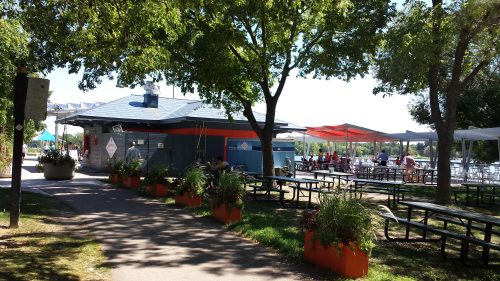 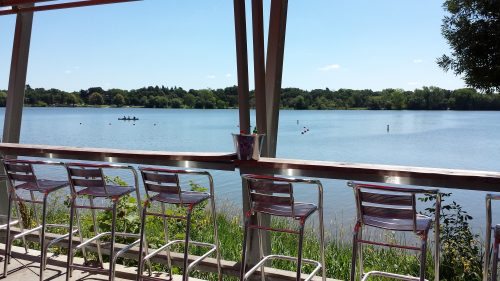 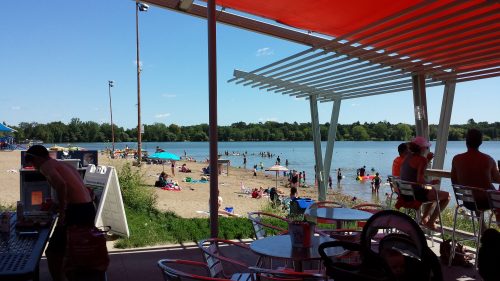 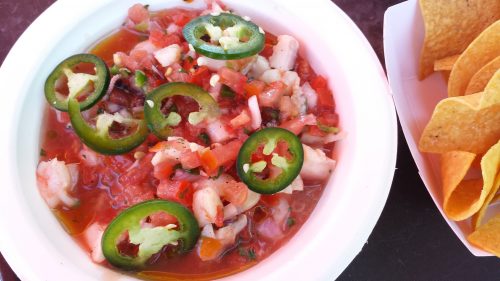 Shrimp and Octopus Ceviche at Sandcastle 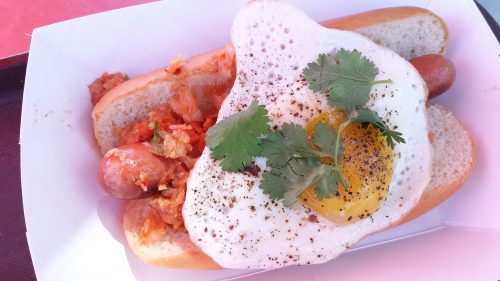 The Dog Flicker at Sandcastle

After lunch, I continued along the northwestern part of the lakeshore, where one tree insisted on doing the twist among its upright peers. I’ve known people like that too. The view of the lake’s users (human and otherwise) was also a classic. 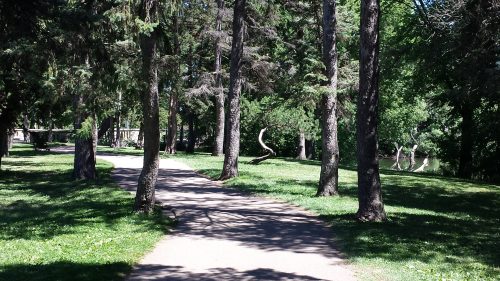 Trees Near the Minnehaha Creek Bridge 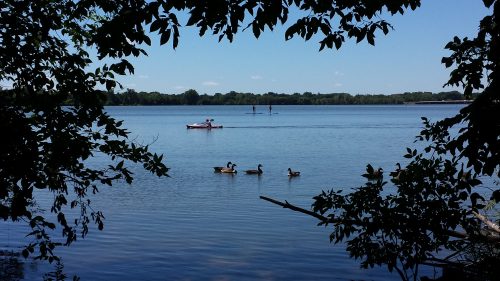 Lake Nokomis from the Northwest

I continued along the lakeshore, retracing the purple connector along the north and then continuing past the Naturescape Garden down the east shore all the way to the neighborhood’s southern border near 54th Street. At that point, I paused to admire Deb Zeller’s Baying at the Moon before retreating to 53rd Street.

As I exited back into the residential area on 53rd Street, I noticed that many of the houses in this part of the neighborhood are more recent. Beyond such overall signs as the number of stories and the style of roof, the period elements include such details as the siding materials, window shapes, and even the use of diagonal struts, as on the house from 1950 on the northeast corner of Woodlawn Boulevard and 53rd Street. 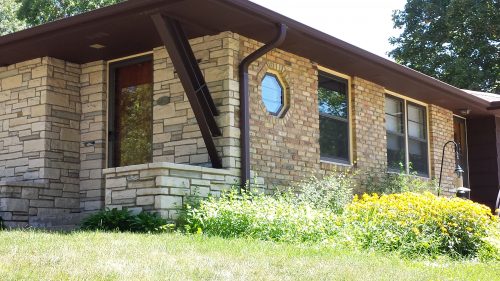 As I wrapped around through the avenues to the east of the lake, though, I once again passed houses from the 1920s. Most of these are 1.5-story buildings in the English cottage style, but I did see some craftsman bungalows and even an occasional two-story house, such as the one pictured here. (Its neighbor, partially visible at the right, is a single story.) 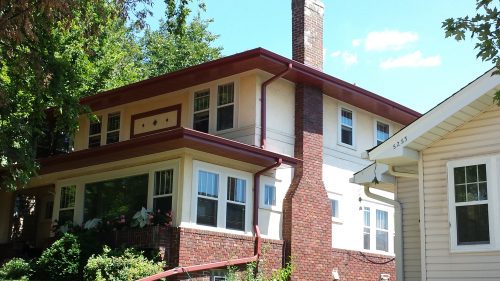 Once I was back to the diagonal alignment near the lake (Shoreview Avenue, which parallels Woodlawn Boulevard), I was back into the 1950s and saw a range of post-war styles: hip-roofed rambler, split-level, and even split-level with tuck-under garage. 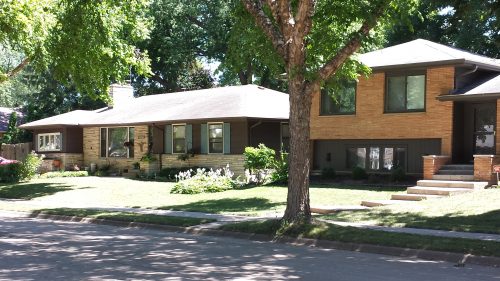 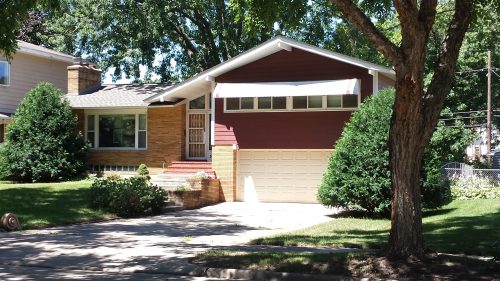 As I neared the end of the walk, the 5000 block of Woodlawn Boulevard brought me an older and even more striking example of how different the styles within a given time period can be. On the east side of the street, a 1.2-story English country cottage from 1928 looks like many others in the area. But directly across from it, on the west side of the street where the back yard is Lake Nokomis Park, stands a house that looks nothing like it, despite being built only two years later. It is a two-story Mediterranean-style house with more that twice as large a footprint. 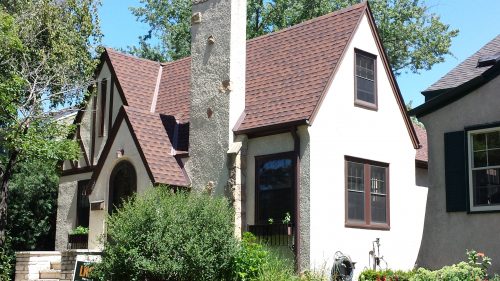 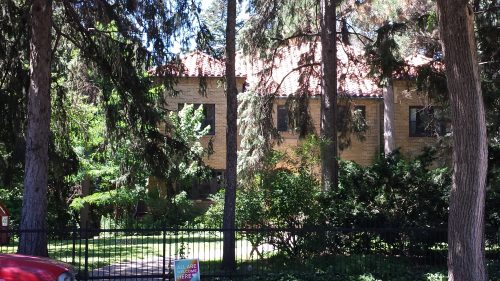 I’ll leave you with one more sight from the 50th and Woodlawn area in the hopes someone will in turn leave me a helpful comment. This photo is an attractive flowering plant with leaves that look fleshy, so perhaps it is some sort of succulent. Can anyone help me out with an identification? [Update 2018–07–29: Marilynn Miller did. Thanks!] 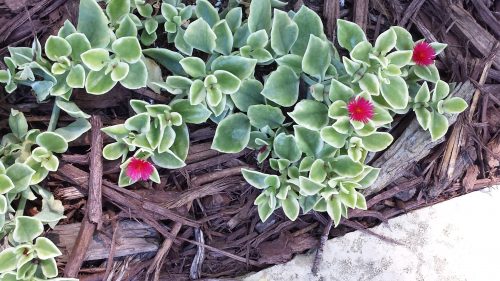 Editor’s Note: Max Hailperin is walking each of Minneapolis’ 87 neighborhoods, in alphabetical order. He chronicles his adventures at allofminneapolis.com, where the original version of this article was published July 28, 2018. We’re sharing them here at streets.mn.