Near the lake, where I previously walked, Keewaydin’s streets are rarely horizontal or vertical on the map. Between 28th and 34th Avenues South, though, all the orientations are nice and tidy. Enough to bore a cartographer. Perhaps that’s why whoever platted the neighborhood decided to have some fun with the spacing. A double-wide block? Sure, perfect for a park and school. Some triple-wide but only half-high blocks? Sure, why not, just for variety; we can stick pseudo-Indian streets between the numbered ones. Oh, hey, let’s throw in a few more half-high blocks, but only one-and-a-half–wide: that that will really confuse anyone following the numbered avenues.

All four of the boundaries of this day’s walk are comparatively major streets, but 34th Avenue, on the eastern edge of the neighborhood, has the most strongly commercial character. I started and ended on that avenue at the intersection with 51st Street East, the site of the Nokomis Library, built in 1968 and renovated in 2011. 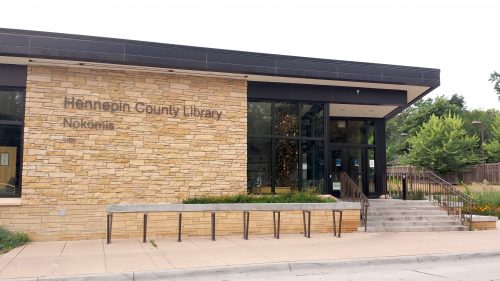 Heading west on 51st Street, I quickly got to see a sampling of the neighborhood’s housing styles: single-family houses in the craftsman and English cottage styles from the 1920s and the rambler style from the 1960s, as well as an unusual duplex from 1936. 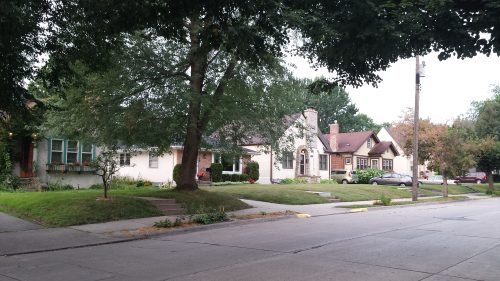 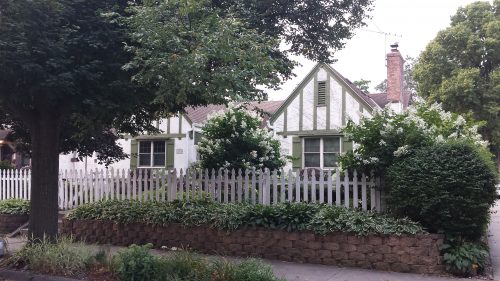 Once I reached 28th Avenue, I turned back westward on 50th Street. Already on the southwest corner of that intersection, I saw the first of several examples of non-residential buildings along 50th Street. White Crane Construction occupies a single-story building that they’ve recently renovated with a landscaped entrance on the 28th Avenue side. 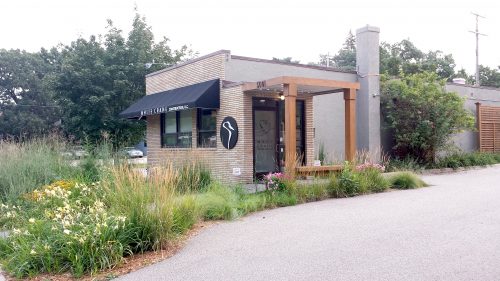 The way I planned my route, the 3300 block of 50th Street needed to wait until I had done some looping around, but even before that, I got to see other notable buildings including a two-story mixed-use building on the northeast corner with 30th Avenue and Lake Nokomis Lutheran Church on the southeast corner with 31st Avenue. The mixed-use building’s ground floor holds Arlee Park’s store on the corner and Lovely Brow and Beauty Studio at a smaller eastern entrance, while the church is home to Hennepin Middle School. 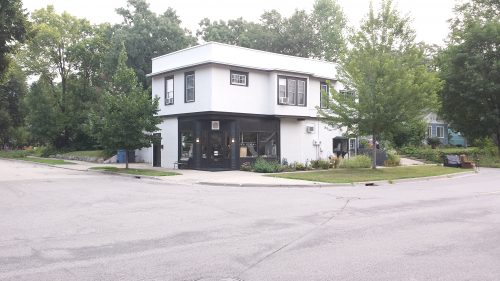 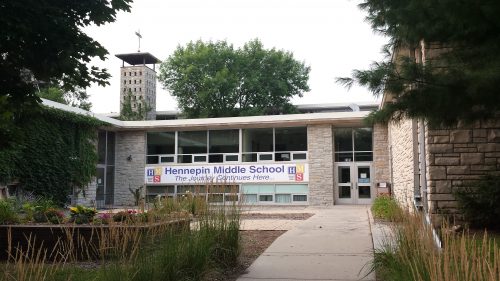 I turned north on 32nd Avenue to East Minnehaha Parkway. So far as the main loop of my route went, I just needed to take a single block of Minnehaha before returning south on 31st Avenue. However, as is typical at a neighborhood border, I also had some forward-and-back spurs to walk on Minnehaha. That’s the price of walking every block in the face of tee intersections, as Leonhard Euler famously observed. And walking every block is worthwhile. For example, had I skipped those spurs, I wouldn’t have seen the main face of the Episcopal Church of St. James on the Parkway. 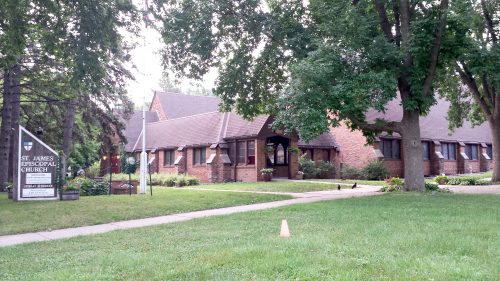 The southwestern corner of 31st Avenue South and 49th Street East is occupied by yet another 1920s craftsman-style house, but this one stood out for the sheer lushness of the property. (Not that every house is of this age or style. Just two lots to the south, I spotted a recently built two-story house.) 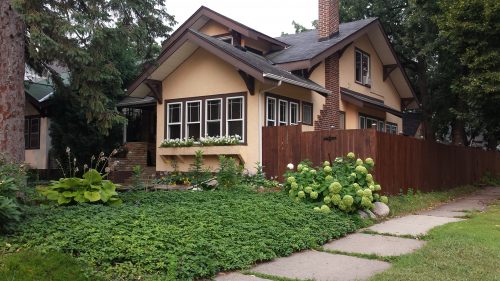 I continued south on 31st Avenue past my turning point at Keewaydin Place and across 51st Street, all the way to the intersection with Weenonah Place. The section between Keewaydin and Weenonah Places was another spur between tee intersections, this time resulting from the half-height blocks.

In this case, I got to appreciate another of the virtues of walking spurs, which is that one sees different things facing in one direction than facing in the opposite direction. On my initial southward pass, I had missed the cows entirely. Returning northward, there they were. Not that I could tell you why they are there. That’s in fact what makes these cows noteworthy. As members of the species Bos taura, they aren’t anything special. But they are absolutely prime exemplars of the subspecies Bos taura enigmatica, the enigmatic cow. 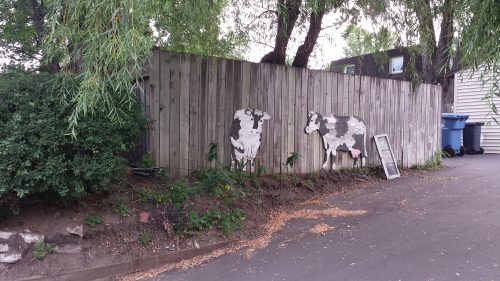 At the eastern end of Keewaydin Place, I was back to the commercial 34th Avenue. First I did a one-block spur southward to my starting point, the highlight of which was right away on the southwest corner of 34th and Keewaydin. I’m a sucker for vintage lettering, and the signs on Keewaydin Auto Sales project a lot of character. Once I was north of Keewaydin, I appreciated the cluster of three small businesses that adjoin the much larger McDonald’s Liquors: Replace (a design office), Homespun (a decor and gift shop), and The Workshop (a studio for pottery and other media). And finally, on the northwest corner with 50th Street, I took a photo of the Nokomis Shoe Shop, where a friend recently bought a nice pair of walking shoes. 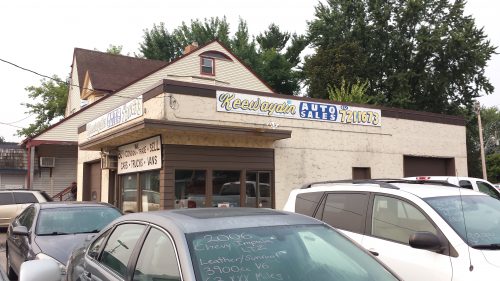 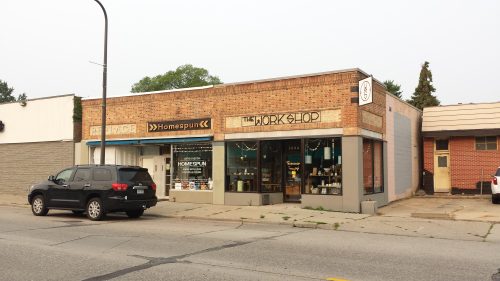 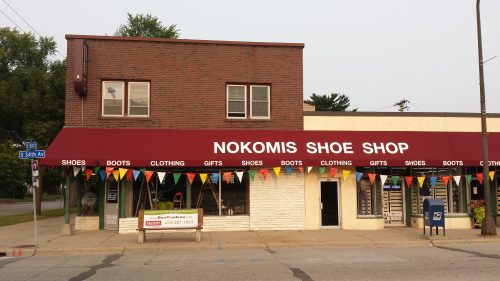 From an architectural perspective, the standout in this commercial node isn’t on 34th Avenue itself, but rather a little off of it in the 3300 block of 50th Street, where Tailorbird Tattoo occupies a streamline moderne jewel from 1940. One door further east, Dominguez Family Restaurant has brightened up a building that looks like a former quick-serve. When I stopped back there after my walk, I learned that the interior has been painted equally brightly but more interestingly. As I waited for my plate of tacos carne asada, I looked around at murals, all of which I was ultimately able to connect in some way with Cuautla, Morelos: portraits of La Adelita (with a volcanic backdrop) and Emiliano Zapata, a coat of arms for Morelos, a historic steam locomotive, the church of San Diego de Amilpas, and the Hacienda de Cocoyoc. 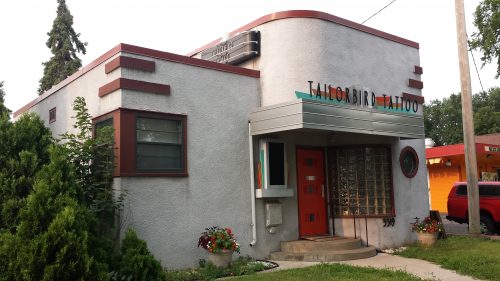 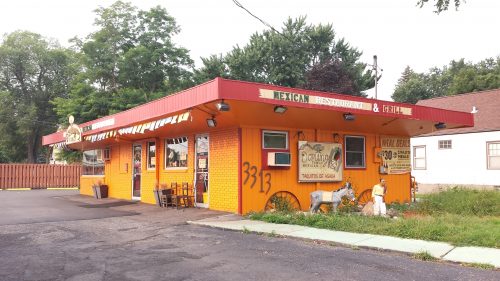 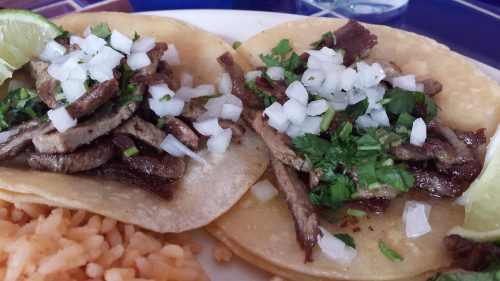 Turning north on 33rd Avenue South, I was back in the residential portion of the neighborhood and once again able to look for houses that stand out from their neighbors, in this case a 2.5-story house from 1910 contrasting with houses that are shorter by a story and predominantly from the 1920s. 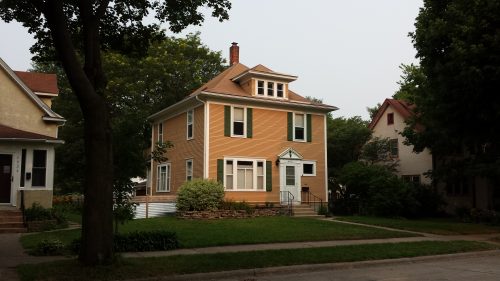 After looping around via Minnehaha Parwkay and 34th Avenue, I took 49th Street all the way from 34th to 28th Avenue. Turning north on 28th Avenue, I got a nice view of a Public Parklet outside the Mel-O-Glaze Bakery, where I enjoyed a pecan bar rich with honey. 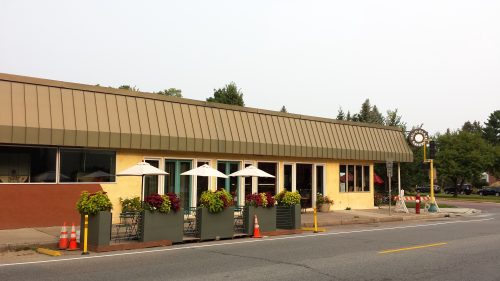 Walking south on 29th Avenue from the parkway to 54th Street, I again took note of an unusual house, as well as an even more unusual mailbox. 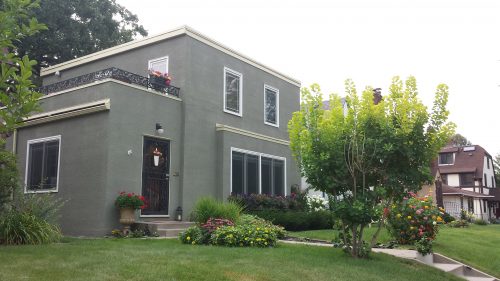 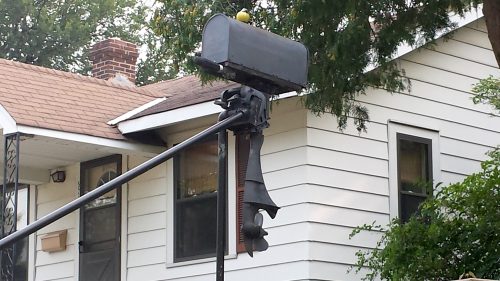 Heading north on 30th Avenue, my first encounter with the Keewaydin Park and school complex was the colorful play structure on the northeast corner of the intersection with 53rd Street, which is the southwestern corner of the complex. Once past the play structure, I could see how the newer portion of the building was attached to the 1928 original. And once abreast with that original, I could appreciate the collegiate gothic detailing of a doorway. 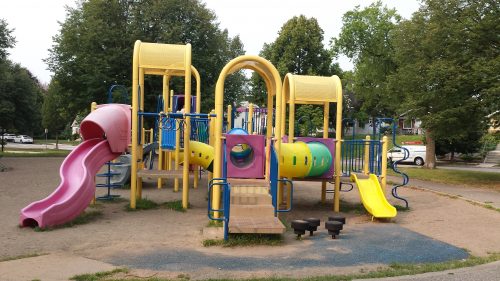 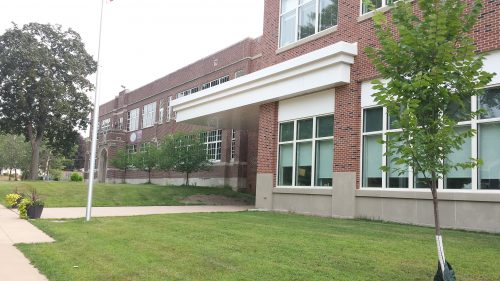 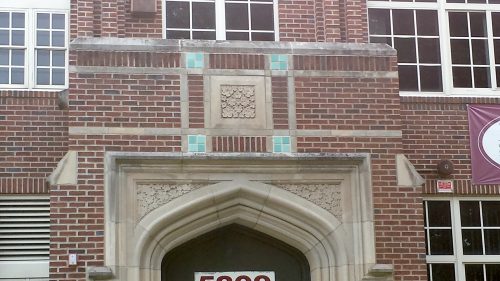 Not that I was paying attention only to the built environment. Throughout the neighborhood, I had seen a disproportionate amount of plantings friendly to pollinators and butterflies. A block north of the school I saw a particularly striking example. 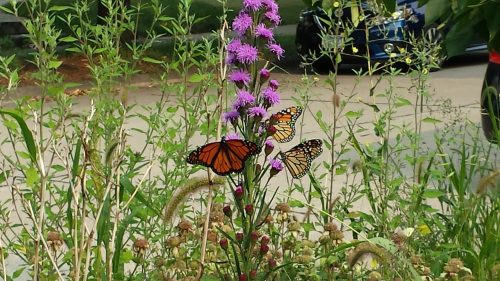 After returning southward on Nokomis Avenue, I turned west on 52nd Street, along the northern side of the school and onward as far as 28th Avenue. From here on out, the route gets rather convoluted, thanks to the irregular grid. I won’t spell it all out, trusting readers to consult the map. Early in this succession of twists and turns, though, as I passed back eastward along the southern side of the park, I spotted another enigma: a book propped against a light post. Is this a lost-and-found item left somewhere visible in hopes that its owner will reclaim it? Or is this an informal analog of a little free library: a book awaiting discovery by a new owner? 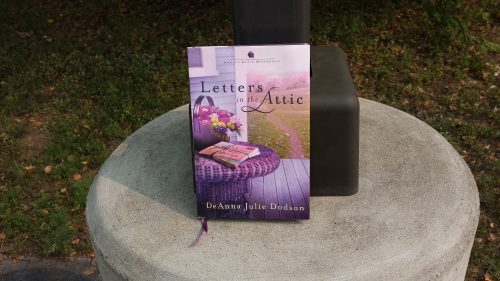 A Found Book, or a Book to be Found?

At the far southeastern corner of the neighborhood, I spotted two interesting businesses on the northwest corner of 54th Street East and 34th Avenue South. First, on the 54th Street side, is Brushed Monkey, a group of artists “painting and refining modern and classic homes.” Second, on the 34th Avenue side, is The Book Trader, a store that sold books (as the name suggests) and far more (as my photo through one of the windows suggests). Alas, its owner died last year, leaving the store in limbo. The closest one can come is to read the loving profile by Hannah Jones in City Pages. 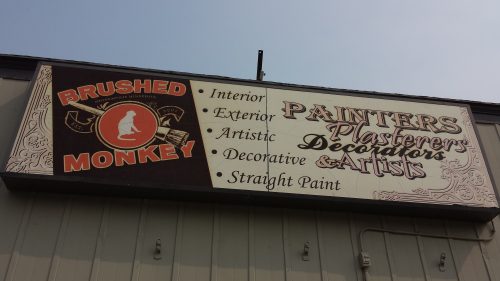 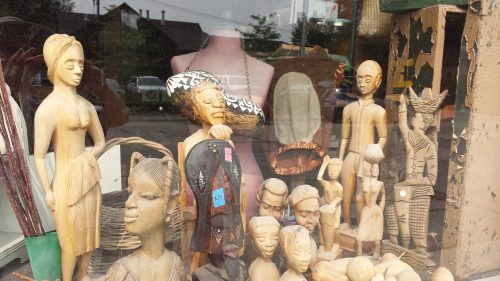 Editor’s Note: Max Hailperin is walking each of Minneapolis’ 87 neighborhoods, in alphabetical order. He chronicles his adventures at allofminneapolis.com, where the original version of this article was published August 21, 2018. We’re sharing them here at streets.mn.

2 thoughts on “Walking All the Streets of Eastern Keewaydin”