Like the other neighborhoods south of 54th Street, Kenny was only annexed from Richfield in 1927, shortly before the Great Depression, and so much of its development dates from the postwar housing boom and has a suburban character. Other major influences are Grass Lake (a shallow wetland) and Minnesota 121 (the freeway connection to Lyndale Avenue), both visible in the map. (Also on the map: my route for this first day, consisting of a blue main loop and red spurs off of it.)

Starting out eastbound on 55th Street West, I saw the typical 1950s housing styles I expected, although some individual houses have been more recently remodeled. And then I reached Humboldt Circle and could see at a glance that somehow I had jumped forward four decades.

This cul-de-sac extends south from 55th Street into a block that had originally been left undeveloped, perhaps as another concession to the water that once permeated this area. Today, the southwest corner of the intersection of Humboldt Circle and 55th Street has a small wetland with a path around it, but the rest was developed in the 1990s.

The west side is lined with six single-story single-family houses such as the red-doored example in the first photo. The east side has seven two-unit buildings for a total of 14 more dwellings. These are a mix of two different styles, with three of the seven being the taller style illustrated by the second photo and the other four being the shorter style in the middle of the third photo. All of these might colloquially be called duplexes, but technically they are “single-family attached dwellings” because the dividing wall extends all the way up to the roof. In other word, they are paired townhouses, though not in the traditional style. 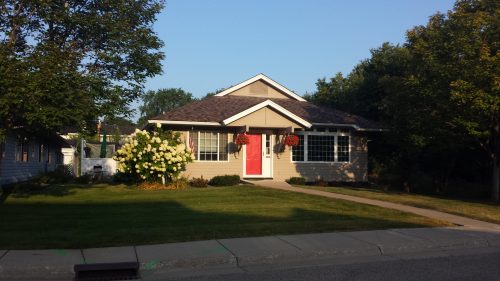 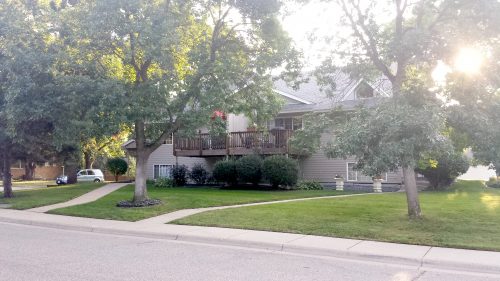 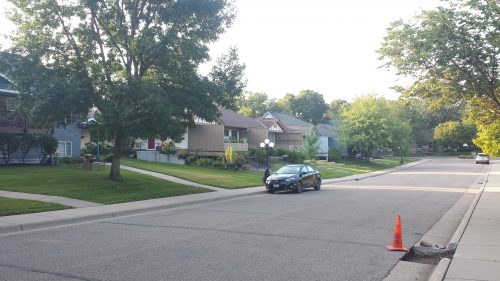 More Attached Dwellings on East Side of Humboldt Cir.

Returning from the spur down Humboldt Circle, I continued on 55th Street past my Bryant Avenue turning point all the way to the neighborhood boundary at Lyndale Avenue. That is, the two blocks of 55th Street from Bryant to Lyndale were another spur. In this instance, the big payoff was seeing the gardens several residents were growing. I took a photo of one in particular because of the striking mask on a pole, perhaps intended as a scarecrow. 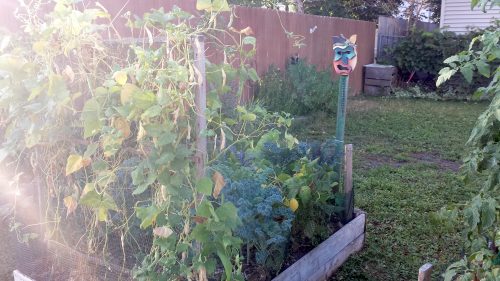 Returning to the intersection of 55th and Bryant, another two block spur took me southward to the intersection of Bryant and Aldrich Avenues, the first of several places where alphabetically named avenues uncharacteristically intersect. These result from the diagonal constraint formed by Minnesota 121. This particular intersection is just past Bryant Avenue Baptist Church, which is on the southeast corner of Bryant and 56th. After I did my about-face and was facing back toward 56th Street, I had a good view of the church’s steeple against the morning sky. 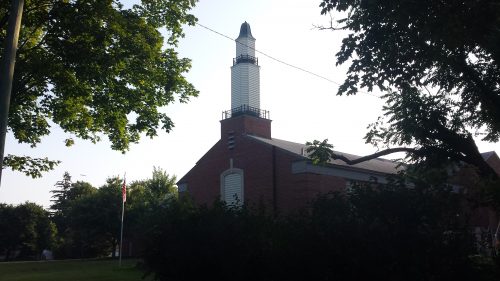 Once back to 55th and Bryant for the third time, I was able to resume my main loop, north to 54th Street and then back south on Colfax Avenue. This was the start of a serpentine section of the route: south on Colfax, north on Dupont, south on Emerson. One highlight on Colfax was a sun-drenched milkweed garden in the 5400 block, its pods burst open to reveal puffs of white silk that stand out against the green background along with the colorful sign and stonework. 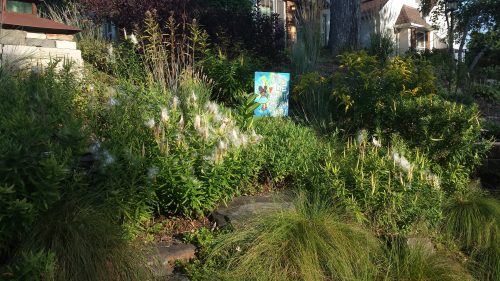 At the outset of the walk, I remarked that the houses largely date from the 1950s, although individual ones have been remodeled since. For the first fifty years or so, the typical remodeling job tried to blend in with the existing house as much as possible. More recently remodeled houses, by contrast, conceal their origins like immigrants changing their names on Ellis Island.

I saw a good example of the more recent remodeling trend in the 5900 block of Dupont Avenue South. Looking casually at the photo below, you might think that the three two-story houses occupying the bulk of it were built in the 21st century. The bit of one-story house at the far left would be the odd one out, the one from the early 1950s. But in fact all four are from that period, and until recently each of them had only a single story. 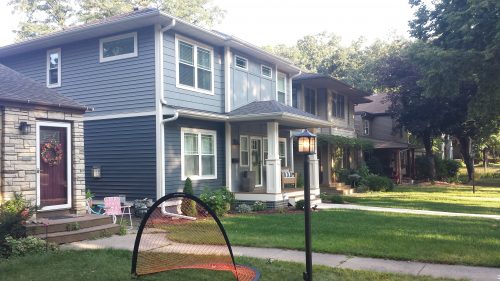 On Emerson Avenue, it seemed that each street corner brought a new treat. First was the flower-encrusted utility pole at 55th Street. Then a cluster of welcoming features around a Little Free Library at 56th Street. And one block later, on the southwest corner with 57th Street, I got my first view of the Kenny School, for which the neighborhood was named. The school itself was named for polio-treatment pioneer Elizabeth Kenny, better known as Sister Kenny. It was built in the brief period between Kenny’s death in 1952 and the introduction of vaccination against polio in 1955. This corner of the property houses a shady outdoor seating area and designated habitat and rain garden sites. 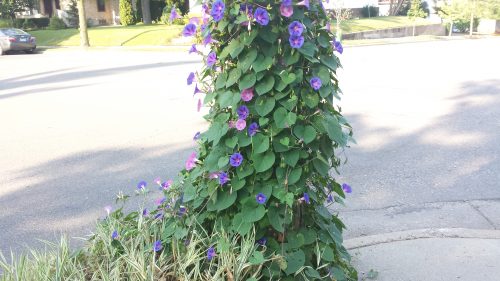 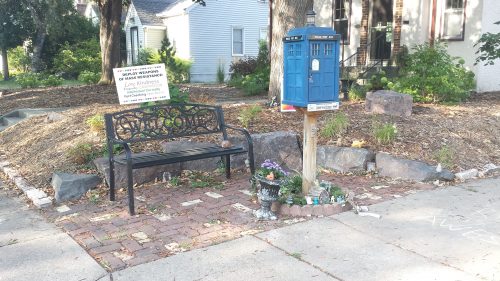 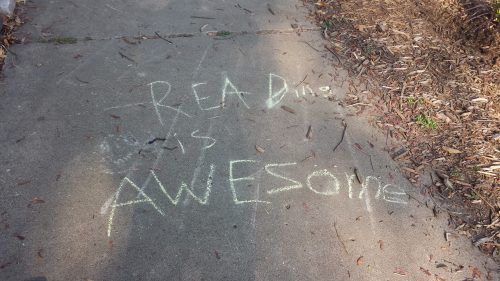 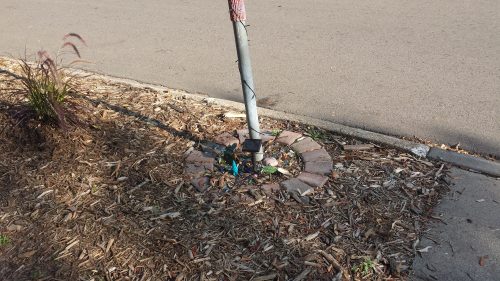 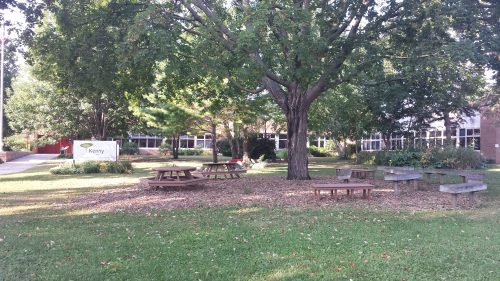 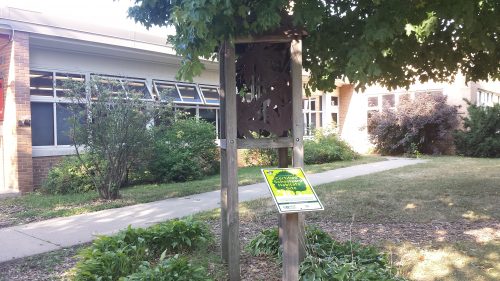 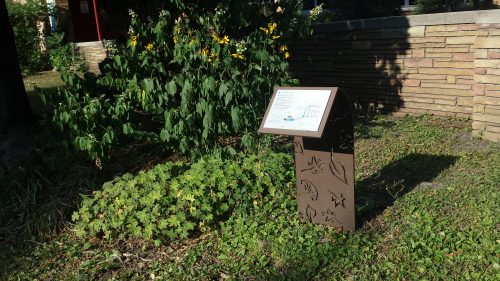 This serpentine through the avenues ended in a bit of a snarl. At the southern end of neighborhood, Emerson Avenue terminates at its junction with a diagonal section of Dupont Avenue. I followed Dupont first southwest to Fremont Avenue, then back northeast to 60th Street. Curling around onto west-bound 60th Street took me all the way to the eastern shore of Grass Lake, where I turned onto Girard Avenue, initially northward across 59th Street and into a cul-de-sac.

Because of the wetland, the west side of Girard Avenue has lacked houses south of 59th Street until recently, aside from the one on the corner. But now I got to witness what looks to be the final touches being put on a newly constructed house supported by a helical-pier foundation. In the cul-de-sac, I was back to the 1950s, albeit the later part of that decade. 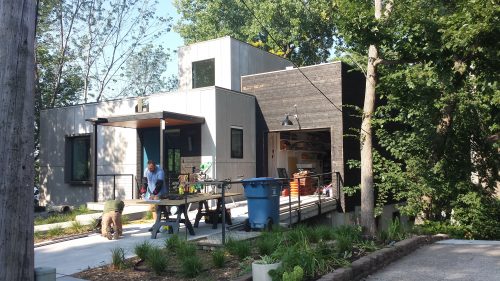 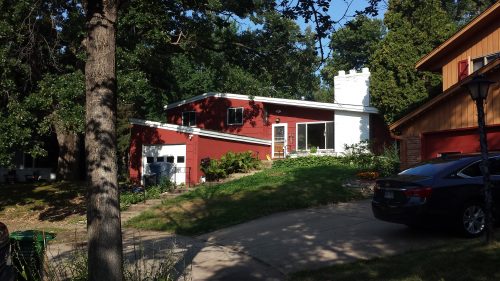 Turning south, I got to see more of Grass Lake itself as well as the landscaping neighbors have added to it. The wetland is quite shallow, 1.5 meter at most, 0.6 on average. However, that doesn’t stop either ducks or humans from enjoying it. Indeed, I saw signs of both simultaneously: a slow duck crossing sign and a pair of adirondack chairs. Once I got closer, I could see that the chairs have a pleasant view that includes an area where ducks were congregating. Michelle Bruch has written more extensively about this area in the Southwest Journal. 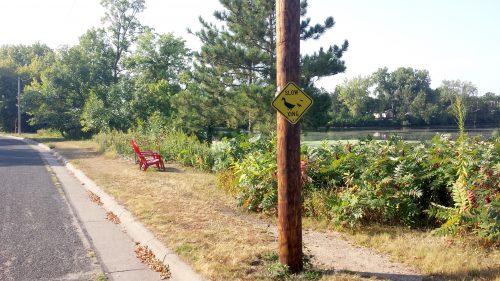 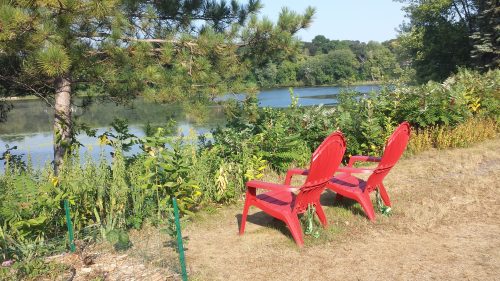 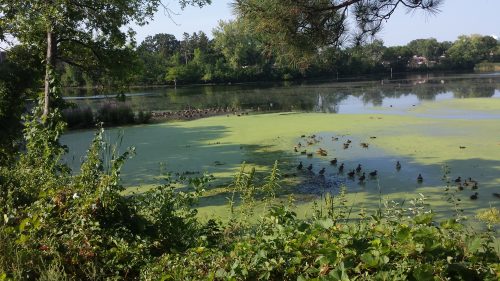 At the southern end of Grass Lake, I looped via Dupont Avenue to Fremont Avenue, which took me north to a tee intersection at 58th Street—Fremont being interrupted by Kenny Park and School. This gave me an opportunity to return to the eastern edge of the neighborhood and pick up a strangely quiet, isolated block of Aldrich Avenue that connects 58th and 57th Streets just shy of Minnesota 121. On 57th Street, I made my way back westward to Knox Avenue with a couple detours on Fremont, Girard, and Humboldt Avenues. I saw lots of little things along the way and one big thing, another school. I’ll be passing along its Irving Avenue face when I return for a second day in the neighborhood, but here is a first view of Anthony Middle School, named for Susan B. Anthony. 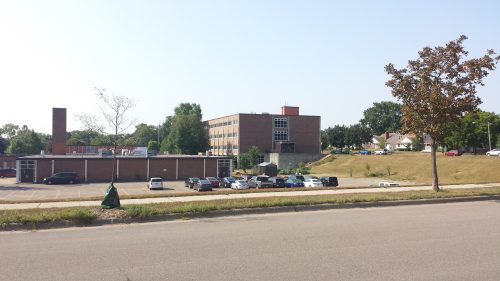 In case a 1958 middle school isn’t sufficiently cheery for you, I’ll leave you with one sight from Knox Avenue: an Eye Stopper cork tree bearing an Infantino Go Ga Ga elephant. 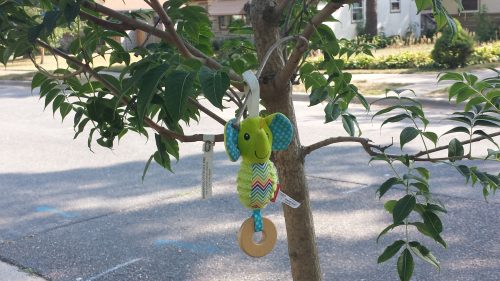 Editor’s Note: Max Hailperin is walking each of Minneapolis’ 87 neighborhoods, in alphabetical order. He chronicles his adventures at allofminneapolis.com, where the original version of this article was published September 3, 2018. We’re sharing them here at streets.mn.