Bus-only lanes have recently been rejected for Hennepin Avenue in Minneapolis. This street can get congested, which causes buses to move very slowly. Of course, the point of bus lanes is to help transit vehicles bypass the congestion, so it makes sense to add them on a street like Hennepin.

In St. Paul we have bus-only lanes on 5th and 6th Streets. These two are parallel one-way streets that form the main east/west bus routes through downtown, while the Green Line LRT is on 4th. These streets also carry car traffic and sometimes have on-street parking.

If bus-only lanes are there to help buses bypass congestion are they truly needed in downtown St. Paul? Based upon the latest traffic figures from the City of St. Paul I would say “not yet.”

Traffic and Lane Numbers on 5th and 6th Streets

There aren’t average daily traffic counts for every block along 5th and 6th, but there’s enough to get a good picture of what’s going on:

I have to assume that the AADT numbers reported here include the numerous buses that drive on 5th and 6th Streets every day. Nearly every block has 2-3 lanes for cars in addition to the bus-only lane. Clearly, there are more lanes than necessary for the amount of traffic volume. Maryland Avenue was recently converted from 4 lanes to 3 with somewhere around 20,000 AADT. These two streets combined aren’t even close, and yet on its busiest block (Sibley-Jackson, 12,500 AADT) there are are a total of 8 vehicle lanes!

It’s also worth mentioning that there are so many buses on these streets that they are often leapfrogging one another and actually driving in one of the car lanes instead of the bus lane because other buses are stopped at a bus stop and blocking the way. 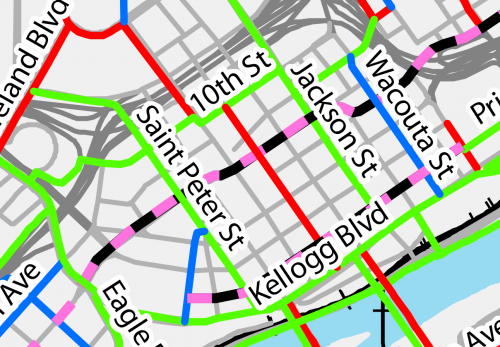 The Saint Paul Bicycle Plan includes a bold downtown loop called the Capital City Bikeway, which is planned to be a comfortable, off-street bikeway that encircles the city (on Kellogg, Jackson, 10th, and St. Peter Streets). This was partly inspired by the Indianapolis Cultural Trail. It is worth noting that in Indianapolis they not only have a loop encircling part of their downtown, but they also supplement it with bike lanes going through downtown. 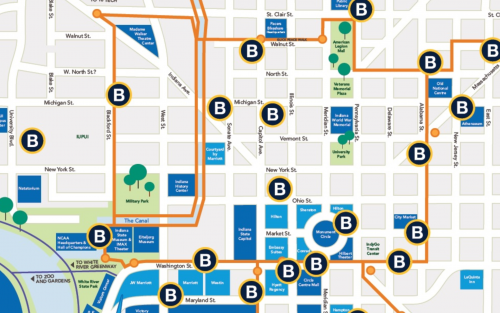 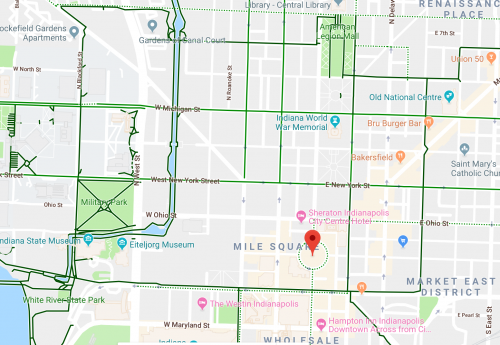 Clearly there are many safe ways to get around downtown Indianapolis by bicycle when you choose to get off the Cultural Loop. It may appear that 7th and 4th Streets are on the Saint Paul Bicycle Plan, but they are both only marked for “further study” and have significant problems.

Recently, the St. Paul Director of Public Works stated a goal of doing a mill and overlay (M&O) of every downtown street within three years. It has been practice in St. Paul to install bike lanes when a street is receiving this M&O treatment if they are called for in the Bike Plan. This new goal provides not only an opportunity but an urgency to examine every downtown street to see where we have excess capacity and where we might be able to provide more safe riding opportunities for residents and visitors.

On 5th and 6th Streets we can both increase capacity by diversifying modes and increase comfort for pedestrians and cyclists without majorly impacting the current traffic load. I propose that we install buffered bike lanes on 5th and 6th Streets between the curb and the bus lane by removing one car lane in each direction.

Buses would regularly need to pull into the bike lane in order to pick up or drop off passengers, but this is already the case with most bike lanes in our city. Shifting the bus-only lane from the curb would put many buses in the same position they are already since they must drive around other buses that are stopped. A few blocks, such as 6th between Wacouta and Sibley (between the Bulldog and Mears Park), would require bicycles and buses to share the same lane. This isn’t the most comfortable, but it’s manageable for single block segments, such as this.

If we reduce one car lane in each direction we might possibly have a bit of congestion downtown, which would justify the bus-only lanes we already have. We should not avoid car congestion at any cost, and certainly not by limiting more efficient and healthy modes of transportation like walking, cycling, or taking transit.

No Such Thing As Redundant Bikeways

Even if 4th Street and 7th Street were to become bikeways that would not make bike lanes on 5th and 6th “redundant.” Planners and engineers need to retire this argument. We don’t talk about redundant sidewalks because the next street has sidewalks, or even because the other side of the street has one. We never call streets that accommodate cars redundant, though they sometimes have too many lanes. We want our car and sidewalk networks to be complete and provide access to every place in the city. Bikeways should likewise be part of a dense network. Just because I can safely ride on the Capital City Bikeway (someday when it’s completed) that doesn’t mean I can safely get to my destination on 5th Street. Many of us want to be able to ride not only around downtown but through it.

I hope that we don’t go ahead with the M&O for every downtown street without considering where we can add bicycle lanes for little additional cost. It’s a great opportunity and it would be a great fail if we don’t act on it. The Saint Paul Bicycle Plan has been a great start for our city, but it is already in need of updating. We should not let it be a tool to support inaction simply because something is not listed in it.