One of the best things about Fall in Minnesota is apples – local apples.  Delicious (but not Red Delicious®) apples progressing over the next month or so, starting with State Fair (a little too tart and squeaky for me) and First Kiss® (a juicy tangy winner in the early season apples) along to Zestar!® and Honeycrisp.  Best of all, local apples do advance the streets.mn mission of better places which are delight-cultivating, inspiring happiness and wonder in all seasons and here are the sweet, tangy posts from streets.mn last week:

Downtown Apartment Areas Deserve Better Bus Service writes Aaron Isaacs saying “Thousands of new apartments have been built on the fringes of downtown Minneapolis in the North Loop, the Guthrie Theatre area (Downtown East) and across the river in Old St. Anthony. These new residents ought to be prime candidates for bus service, but Metro Transit has made no service changes or improvements to try and attract them.” The post reviews possible improvements in the North Loop, Downtown East, and Old Saint Anthony.  Commenters generally agree and provide some additional suggestions for improvements.

Aaron Isaacs also reviews The New Hennepin Bus Lanes (and also the short lane on Chicago), “The entire street has been re-striped, with the bus lanes being wider than the adjacent mixed traffic lanes. That will pay dividends when snow narrows the curb lanes. While there is prominent signage, the most striking thing about the lanes is that they’re painted bright red.” 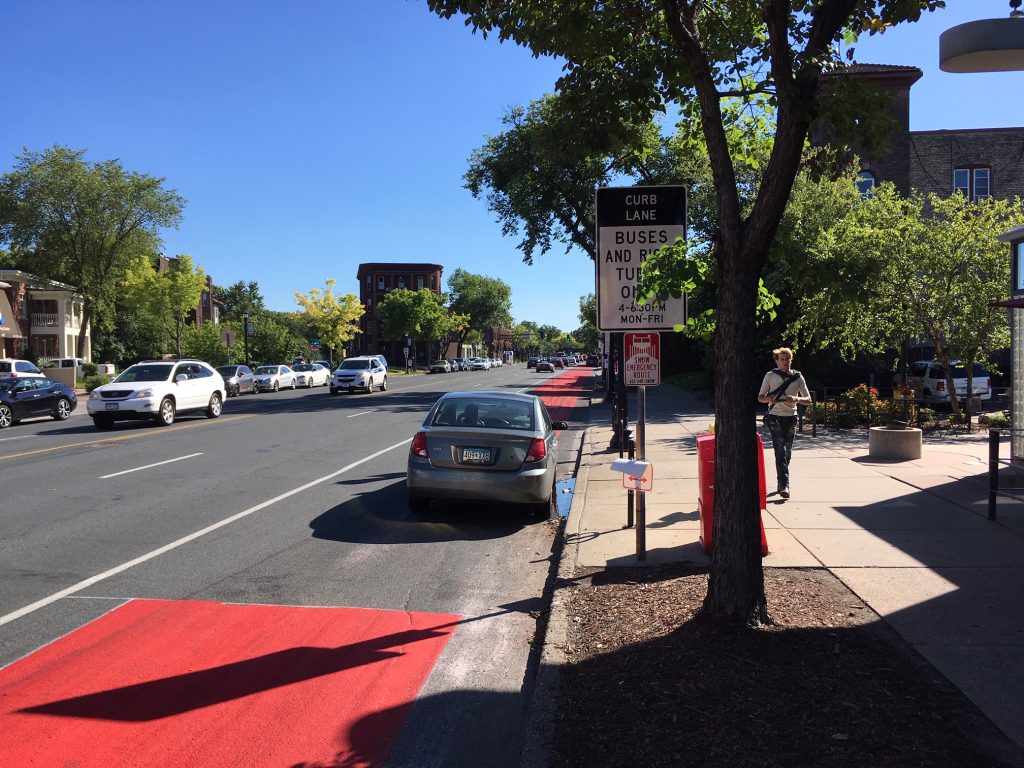 Note the No Parking sign. However, the car is parked in one of the gaps in the red paint (Photo: Aaron Isaacs)

Ian R Buck identifies Opportunities to Extend Bruce Vento Trail Westward. After describing the high stress ways to get to the Bruce Vento Trail from the west, he asks, “So, what can we do about this? As Eric wrote recently (why is Eric always beating me to these articles?) Pennsylvania is marked on the Saint Paul Bicycle Plan as a future off-street bike trail, which will be fantastic! I bet that would take a long time to put together, since I haven’t heard any city staff talking about this corridor. I wonder if there is a way to get an interim solution in the meantime.” And he maps out some possibilities for that interim route.

Wolfie Browender takes us on another bike ride around Saint Paul through Merriam Park, Hamline-Midway, and Como Park in Como Mingling: Eyeing the Historic, Scenic Oddities of St. Paul.  As always, Wolfie finds delightful surprises, historical places, and interesting people to talk to. 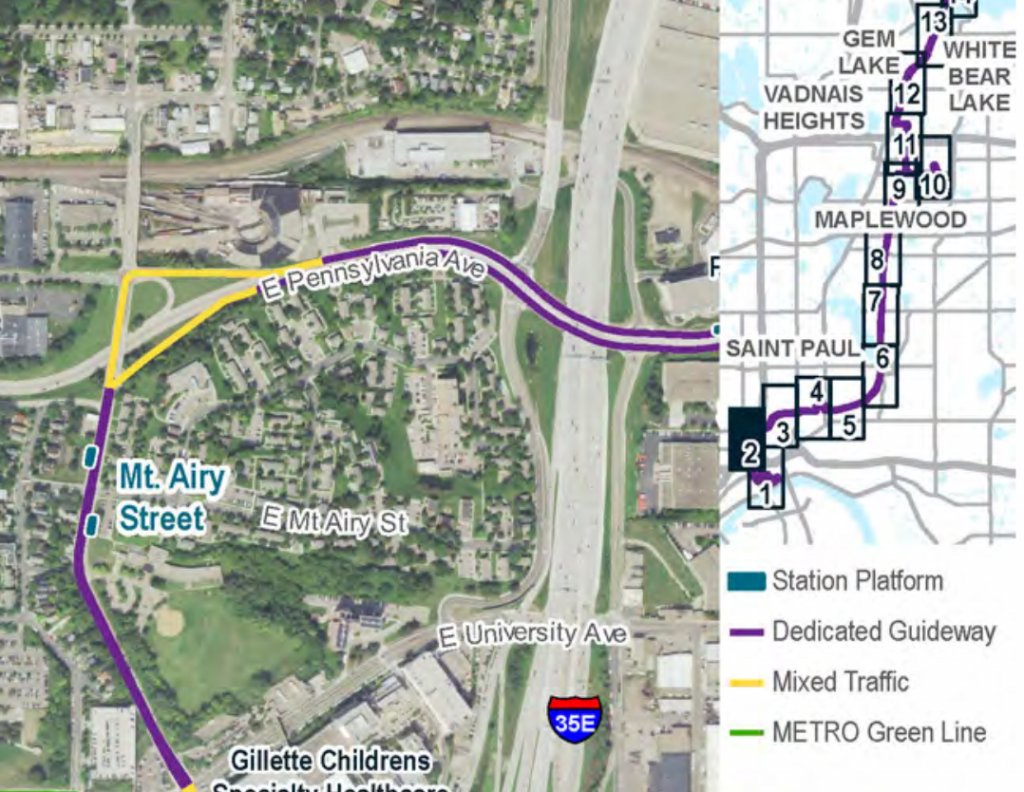 Links! National Links: The 30 Minute Constant from the Overhead Wire.

Reviews and reports: Conrad Zbikowski continues his stream of vehicle-related information with  Review: Lime Gen 3 Electric Scooter  and the follow up Report: Electric and Plug-In Cars Have 21 Percent Fewer Lifetime Emissions Than Gas Ones moves from tailpipe emissions to the lifetime emissions of a vehicle, including production and disposal. 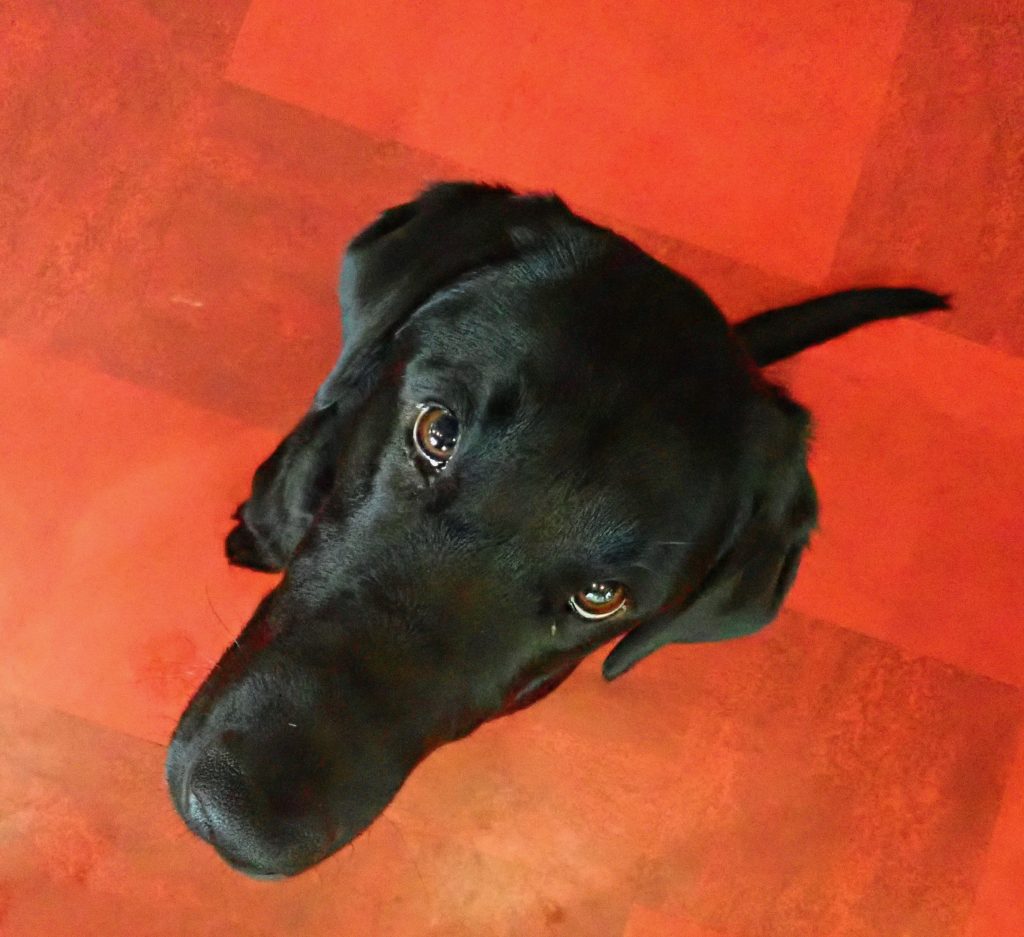