Just this past week, the Minnesota Department of Transportation (MnDOT) released a report entitled “Pathways to Decarbonizing Transportation” that models various ways for the state to achieve its climate goals. These goals were set in the Next Generation Energy Act (NGEA) that was passed in 2007 and signed by Governor Tim Pawlenty (!!!). Minnesota aimed to cut greenhouse gas emissions from 2005 levels by 15% in 2015, 30% in 2025, and 80% by 2050. This timeline is both not ambitious enough for the scale of the problem, and also more aggressive than Minnesota has so far been able to achieve.

One significant reason why the state has not had the success that it envisioned is that the transportation sector has not decarbonized as quickly as it needs to. Between 2005 and 2016, transportation emissions in the state fell just 8%, and the largest chunk of that decline was likely caused by the economic collapse that began to manifest in 2007. While some sectors of the economy, especially power generation, have seen tremendous progress in decarbonizing, transportation has lagged.

That’s why MnDOT’s report is well-timed. As millions of people around the world rally for action on climate change, Minnesotans need their DOT to act with renewed urgency to slash carbon emissions in its sector. Unfortunately, while the report was produced by smart people with good tools and it provides some interesting data, it contains a flaw that, if not addressed, virtually guarantees that Minnesota’s overall efforts to decarbonize will continue to fall short of expectations.

Minnesota’s DOT, like most state DOTs, was originally named the Department of Highways. While the agency’s name and mission have broadened, its work still is mainly focused on building and maintaining high capacity roads for the benefit of cars and trucks. Over the course of its existence, MnDOT has been extremely effective at its job. The state has the fifth most highway miles of any state in the country—an astonishing statistic, given that it ranks 22nd in population and 12th in land area.

But in the age of climate change, this success begins to look more like a failure. Decades of research have demonstrated a clear link between the amount of miles of roadway and the amount of vehicle miles traveled (VMT). In other words, the more roads you build, the more driving—and emissions—you get. 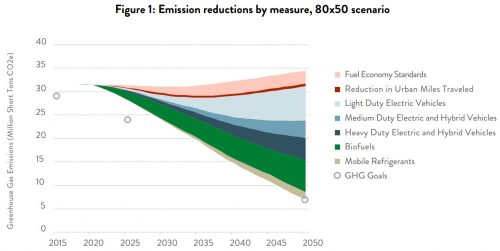 MnDOT’s climate report suffers from an inability to look at this paradigm squarely. To the left, is a graph that from the report that shows how the agency anticipates Minnesota meeting its climate goals. The top edge of the color represents the current path, and the bottom edge represents the path that the state needs to achieve to meet an 80% carbon reduction by 2050 (there are also projections for a 100% reduction). Each color represents a different decarbonization strategy, and their weight represents their share of the overall change.

The three shades of blue represent a shift to electric vehicles in cars, light, and heavy trucks respectively. Just above them is a slim line of red, and that represents a reduction in VMT. To put it simply, MnDOT (much like other DOTs) expects that electric vehicles will save the planet, not significant changes in driving behavior.

This is a convenient conclusion for MnDOT to come to! The widespread adoption of electric vehicles is not something that MnDOT has a lot of control over. There will need to be a roll-out of roadside charging infrastructure, and state policy will have to mandate more fuel efficient cars, support research and development of cleaner fuels, and offer better incentives for electric vehicles, all of which MnDOT can lobby for. But the basic premise of the agency will not need to be rethought, and the agency’s current work can go on unabated.

How does MnDOT come to this conclusion? Page 28 of the report explains where the emphasis on fuels and power, not cultural changes, comes from:

“The biggest surprise from the modeling was that the biggest GHG emissions reductions were from changes to vehicles and fuels and that reducing vehicle miles traveled would a limited direct impact on GHG emissions, especially when more people are traveling in ultra-low emission vehicles.”

At the same time, these models were baked with 80-100% of the vehicle fleet being electric by 2050. It doesn’t seem especially surprising to me that if your inputs for one decarbonization strategy are extremely conservative, and your inputs for another are extremely aggressive, the latter will seem the more effective strategy.

It’s useful to have reports that focus on specific sectors of the economy in order to dive down into deeper detail. But it is essential to occasionally return to the surface for air, to understand the larger context. The MnDOT report’s reliance on electric vehicles to achieve the state’s climate goals is understandable and justifiable. Electric vehicles are an extremely important piece of the fight against climate change. But they only work to solve the issue as a component part of a much larger effort.

Let’s hypothesize that it would be possible, over the course of just the next year, to achieve 100% electric vehicle adoption in the United States. This would be good news for urban air quality, but it would do almost nothing for the planet. That’s because these vehicles still need electricity for power, and the ways that we produce that electricity still emit a great deal of carbon.

It is true that no industry is making progress towards decarbonization as quickly as the electric power industry. The carbon emissions that result from Minnesota’s power consumption have fallen 29% between 2005 and 2016, and the same story is true just about anywhere in the US. At one end, wind and solar energy are increasing their capacity, while at the other end, switches to more efficient systems, like LED lights, have reduced the commercial need for power. It certainly makes sense to hitch the carbon reduction strategies of other industries, like transportation, to the success of the power industry by electrifying everything. 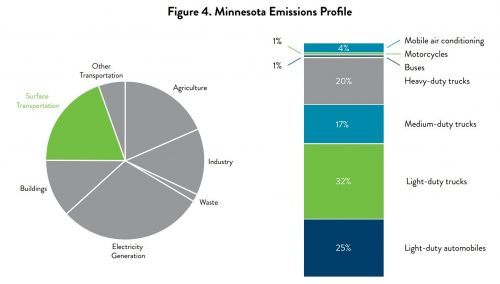 But that shift will also massively increase the amount of power needed. The chart on the right shows the breakdown of where Minnesota’s emissions come from. In our hypothetical scenario in which electric vehicles are entirely adopted in just one year, the primary effect would be to take the wedge labeled “surface transportation” and merge it with the wedge labeled “electricity generation.” Congratulations, the transportation wedge is now gone. But now, instead of renewable sources having to provide X million megawatt hours, they have to provide X+Y million megawatt hours. Until that can happen, that’s extra demand that can only be filled by coal and natural gas.

This is why reducing VMT is so critical: it makes that “Y” smaller, and it makes it smaller right now. Every trip that is shifted from an internal combustion vehicle to an electric vehicle creates additional energy demand that still has to be decarbonized at some later place and time in the power sector. Strategies like providing incentives to charge vehicles at night can only manage so much of the increased load. This is putting aside entirely the industrial emissions that come from the manufacture of the new cars, and the emissions produced in extracting the rare metals (like copper and nickel from Northern Minnesota) required for modern batteries and electrical systems.

In contrast, every trip that is shifted from an internal combustion vehicle to a bicycle, for instance, is decarbonized right on the spot. You can hypothesize a future in which 100% of cars are electric and 100% of power generation is carbon-free, and as a result we can all drive as much as we want. But until we get there, there’s going to be a lot of carbon released, and that carbon still counts. A study of this problem in California estimated 100% electric vehicle adoption and 75% renewable power (less ambitious than MnDOT’s projections but still ambitious!) by 2050, and still found that a significant decline in VMT was needed (more ambitious than MnDOT’s projections) was needed to meet the state’s climate goals.

The authors of MnDOT’s report are not unaware of the dynamic of shifting carbon emissions around from sector to sector without eliminating them. The report’s model includes estimates for how quickly the power sector will shift to renewable sources. I’m not clear, however, to what extent the model also projects the way in which electrification in transportation will increase the overall demand for power, making achieving that goal increasingly difficult.

But we can put the exact numbers aside. MnDOT’s projected fuel-focused decarbonization of the state’s transportation system relies upon ambitious progress in two separate sectors of the economy, for which success in one area makes success in the other more challenging. All the while, emissions will continue to be released into the atmosphere. In contrast, strategies that focus on reducing VMT will pay off in immediate and lasting emissions reductions, all the while making the job of decarbonizing those two sectors of the economy easier. There’s no transportation strategy that is more direct in reducing emissions right away than reducing VMT.

The other major reason why reducing VMT requires far greater attention from MnDOT is that unlike vehicle electrification or alternative fuel development, it is something that is actually largely in the agency’s control. The amount that people drive now and will drive in the future is highly elastic. Reducing the size of roads is one proven strategy for reducing VMT that MnDOT could bake into every road project it undertakes. Instead of letting projected future traffic volumes dictate the size of the road that it is building, MnDOT could shift to the opposite approach; setting an ideal future traffic volume that incorporates some standard decline (20%, for instance) and then designing a road for that volume. MnDOT could also shift to a statewide Fix It First policy, which prioritizes maintenance of existing roads ahead of any new road construction.

MnDOT could also take more deliberate steps to promote alternative modes. Many state highways also double as commercial corridors for Minnesota cities and towns. Instead of blowing up these streets for through-traffic, MnDOT could adopt policy for its engineers that mandates pedestrian priority and explicit design measures like wide sidewalks, frequent crosswalks, and measures to slow vehicle speeds in these ‘Main Street’ areas. MnDOT is also the agency with the necessary power and scope to work to create a state-wide regional rail network, with frequent service between the Twin Cities and St. Cloud, Duluth, Rochester, and Winona/La Crosse.

MnDOT may also have powers that it has yet to ever exercise. In California, the Governor has directed a shift in perspective and money for CalTrans, towards increasing the kind of urban density that reduces the need for driving trips. Density also has a number of other benefits, including increasing the heating and cooling efficiency of buildings and reducing the VMT of not just light duty vehicles, but also medium and heavy duty vehicles delivering goods and services.

Making these changes would require similar leadership from both the top of the agency, Commissioner Margaret Anderson Kelliher, and Governor Tim Walz. It would require an institutional shift in power, away from the traffic engineers and towards the agency’s planning staff, and shift in where money and time are allocated. A number of existing projects would and should be affected.

But such a change is necessary if the state is truly committed to making progress on reducing carbon emissions. The ambitious goals set for other people by the MnDOT report are laudable, and it would be nice to meet them. But MnDOT cannot be allowed to shirk its own responsibilities to make achieving these goals more possible. The agency can take steps to reduce VMT. It only needs to take it seriously and give it a try.

42 thoughts on “To Decarbonize Transportation, MnDOT Needs To Challenge Itself To Reduce VMT”