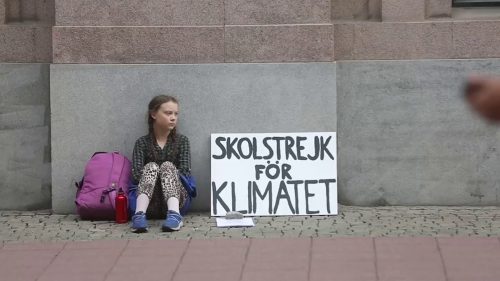 If you have a pulse, you can’t have missed the demonstrations that Swedish schoolgirl Greta Thunberg has been organizing around the world. Whether you call it Global Warming, Climate Change, or, lately, the Climate Emergency, our changing climate is what she is organizing schoolchildren globally to protest about on Fridays.

Most people have a favorable view of Greta. She is seen as a leader, especially for her age. Her actions are topics of conversation in homes, at workplaces, in schools, in coffee shops, in city council meetings, planning commission meetings, and anywhere people gather. She is also constantly in the news. With a few obvious exceptions, she is seen as a leader, doing good, energizing people, and getting people talking.

This is all good.

And yet, is this her goal? People talking? What does Greta Thunberg want?

You can get a feel for what she’s thinking by looking at her recent addresses to the United Nations and to the US Congress. With a stern face, she tells world leaders and American leaders that they are not doing enough. She doesn’t want kind words. She doesn’t want a pat on the back. She doesn’t want thoughts & prayers.

What does Greta Thunberg want?

Leaders, at every level of government, don’t seem to understand this. Or, they are unwilling to commit the political capital to make it happen. Greta Thunberg wants change, and politicians are resistant to change because change upsets people, especially people with a lot of time on their hands; people who complain and people who vote.

But what is the role of political leaders, if not to lead? Even in spite of resistance, leaders need to act and to convince enough voters that this is the action to take. Greta has convinced many students (most of whom didn’t really need convincing); it’s now up to our leaders to convince the rest of us.

So what have our local, regional, state, and federal political leaders been doing to lead us in the era of Climate Change and our Climate Emergency? Let’s take a look at each level of government in turn.

First, let’s look at the federal government. It goes without saying that the executive branch is utterly corrupt, with the those who are supposed to be regulated running the regulatory agencies. What about Congress? There is some light there, with one or more “Green New Deals” being proposed.

But these deals are generally woefully inadequate when it comes to transportation, which comprises 29% of all greenhouse gases (GHGs) that contribute to climate change in the US. What a typical Green New Deal proposal generally misses is that we need to reduce car usage (yes, even with electric cars) by reducing car lanes, reducing parking, and reducing vehicle miles traveled (VMT). We need to dramatically boost federal grants to local & regional governments for transit, bike, and pedestrian infrastructure.

Much as we had the Eisenhower Interstate System to create a nationwide network of freeways in a decade or so, we need to do the same for intercity, high-speed rail.

What about at the state level? What is Minnesota doing?

Governor Tim Walz had proposed a 20¢ per gallon gas tax increase, which was rejected by Republicans. While a good start, 20¢ is far too timid. This is not the dramatic change that Great Thunberg is calling for.

Last but not least at the state level, MNDOT talks a good story about climate change, and even has bike and pedestrian plans. And yet, expanding freeway lanes is still part of its playbook. Earlier this year MNDOT went around the state, ostensibly seeking feedback about their plans. When I asked why they are still expanding freeways (including adding a lane to I-494), I got literally no response:

Aaaand @TheNewLou asks the elephant in the room question: why are we not reducing miles of highways being built? A: well folks, that’s all the time we have tonight!

Again, this is not what Greta Thunberg is calling for. This is not only not dramatic action, it’s really just continuing the status quo. For more on what MNDOT really needs to do, see Alex Schieferdecker’s excellent recent article here on Streets.mn:

Next, let’s look at regional government, the Met Council. For the last round of Comprehensive Plans that cities needed to submit last year, the Met Council had a strong emphasis on housing, transportation, sustainability, and equity. These are all great goals, and the Met Council has been addressing them for at least a decade, but the release of the UN Intergovernmental Program on Climate Change (IPCC) report last year has put a new emphasis on the need for immediate, drastic change. The Comp Plans were generally finished before the IPCC report came out, and thus don’t have the urgency and push for dramatic change that IPCC and Greta Thunberg are pushing for today. It is not enough.

What about county & local governments? Hennepin & Ramsey counties have bike & pedestrian plans, but these are almost universally overridden when push comes to shove, that is, when major county roads are re-engineered every 50 years. Bike & pedestrian infrastructure is generally an afterthought on these projects, with “not enough space for cars & bikes” or “slowing cars too much” or “creating congestion” or “removing parking” all being concerns that derail needed changes. Kudos to Richfield for pushing Hennepin County to make better changes on the recently redone 66th St.; we can only hope this is the future.

There are some great things happening at the city level, but overall it is decidedly mixed.

Minneapolis is doing great things with buses, with the new bright red bus lanes on Hennepin & Chicago, and bicycles (see: Washington Ave. downtown). And yet they made a huge blunder with the recent bike lanes on Hennepin in Uptown, where the bike lanes (between Lake and 31st, especially) needed to be protected and curb separated/elevated, but were not. What ends up happening is determined cyclists are chiding misbehaving motorists; cyclists should not be forced to do this. Street design should fix these problems.

I came out of the Uptown Apple Store, buying some hardware for @Luigis_Best opening next month, only to hear this awesome cyclist chewing out this limousine driver for idling in the Hennepin Ave. bike lane between Lake & 31st. 👍 🚲

Saint Paul just completed a small but well-designed bike lane downtown, and more impressive is their mayor’s recent announcement that half of Ayd Mill Road will be a dedicated bike & pedestrian trail. And yet, streets like Summit Avenue could be so much better than they are, and it’s a constant battle against neighborhood groups who demand no reduction in parking or lane capacity for cars.

Hopkins just won an award for The Artery, its “car light” street downtown that has a bike lane, bike traffic lights, rumble strips & bollards to keep cars at bay, and other great urbanism touches. This is the future we need. Will Hopkins have the political will to continue?

Saint Louis Park is planning some good changes on 36th St./Monterey Ave./Beltline Blvd., but the city council seems too timid to push back against single family homeowner residents who show up in droves to planning & city council meetings. This is despite the fact that the city has already done great things in having both density & SWLRT coming soon. What’s the point of density & transit, if the streets are unsafe for pedestrians and cyclists? Will everyone drive to LRT stations? This is not good enough.

Edina has been doing great things for years with density, primarily at its “neighborhood nodes” including 50th & France and the Southdale District. However, it recently expanded lanes at Vernon Ave. & Interlachen Blvd., approved a drive-thru at one of its nodes, and demanded too much parking on a small business lot in a walkable neighborhood that is on the 6 Bus line, which may someday be the E Line BRT line. That is not the planning we need when Climate Change is upon us.

As I type this, we just had a day at the end of September with feels-like temperatures in the upper 90’s, along with a record-setting year for precipitation. With a Climate Emergency, we don’t have time for infrastructure that is “better than it was”. We don’t even have time for “this is good enough”.

We have to get to “great” ASAP. That is what Greta Thunberg wants, and that is what we have to aspire to as a society.

20 thoughts on “What Does Greta Thunberg Want?”