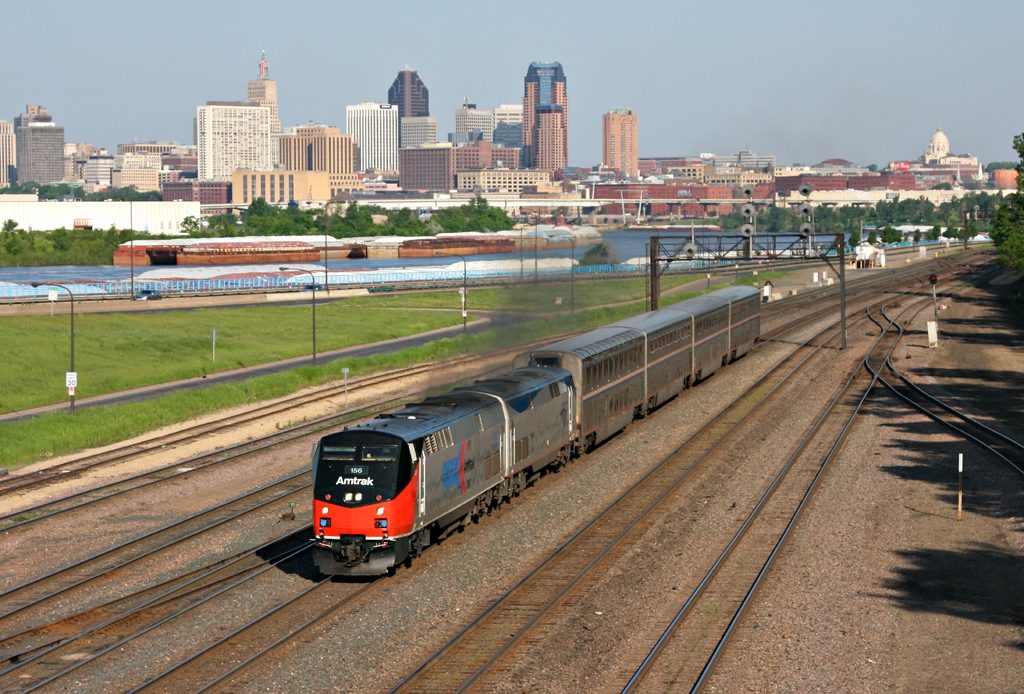 A GE Genesis in 40th-anniversary Phase I paint leads a stub Empire Builder out of St. Paul, Minnesota after floods suspended service west. (2011)

Many of us traveled for the holidays, and many of the Streets community shared their experiences of traveling by Amtrak.

It is very true that when moving on flat ground in a straight line, trains on steel wheels and rails are the most efficient form of transportation. Rolling on steel rails reduces rolling resistance and traveling at slow speeds (compared to jet aircraft) reduced the force of air resistance.

But the question becomes, what happens when the route is not a straight line? Many of Amtrak’s routes take natural paths through mountains and hills and forests, and don’t follow the direct path of a jet aircraft at 30,000 feet.

The route of Amtrak’s Empire Builder highlighting sections of double-tracking.

I calculated statistics for three of the most popular inter-city routes, the Empire Builder from Chicago to Seattle, the Zepher from Chicago to San Francisco, and the Silver Meteor from NYC to Miami. Amtrak was compared to a jet flight and car trips for two types of passenger vehicles. I used available information for Amtrak route length and the Energy Department’s estimates for converting those British Thermal Unit numbers into carbon emissions from burning diesel for trains, jet fuel for aircraft, and gasoline for cars. The median fuel economy for new passenger vehicles is 24 miles per gallon in 2019, according to a survey by Consumer Reports, and a hybrid car gets about 45 miles per gallon.

As we can see, the routes that Amtrak takes are less efficient (the average of the three routes is about 29 percent farther), but this is offset by the great efficiencies of rail transportation. Across the three long-haul routes, the carbon emissions of transportation (not including meal service and other factors) is about 11 percent less than comparable air travel and far better than driving, even in a hybrid car. 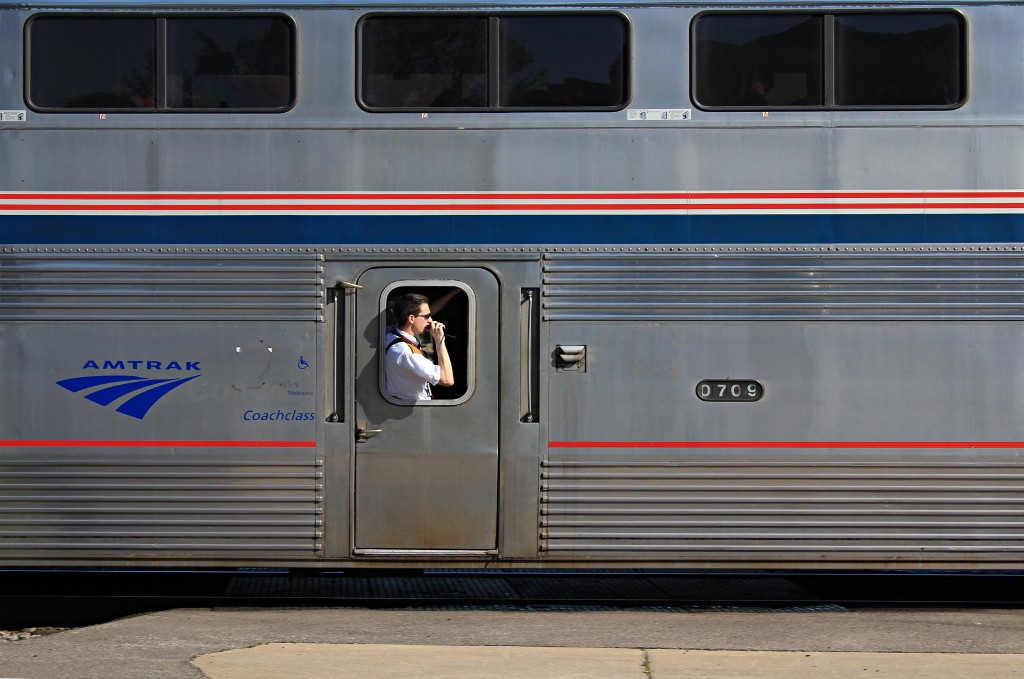 An Amtrak conductor communicates with the train engineer at a station stop in Red Wing.

What can the time-crunched traveller do? It is possible to offset your carbon emissions, and there are a growing selection of options to choose from. Most promise to invest your dollars into projects that either promote renewable energy or carbon capture programs, like planting trees. The cost of offsetting a flight from Chicago to Seattle may cost between $2.24 (Cool Effect, Inc) and $3.13 (terrapass), depending on the program you choose. That’s an easy price to pay for the convenience of air travel. It is important to do your research, as there are bad actors out there.

If you enjoy the leisurely journey, be sure to try Amtrak, and share your experiences with the Streets community!

Empire Builder Train 7/27 which departed Chicago (CHI) on 1/2 is currently operating approximately 11 hours 40 minutes late due to holding for the bus bridge into Spokane (SPK).

12 thoughts on “Trains, Planes, or Cars: Which is the Most Carbon-Efficient Way to Travel?”