For those of us who live in the Merriam Park neighborhood of St. Paul, on the city’s western edge close to Marshall Avenue (the Capital City’s equivalent of Lake Street), the upcoming B Line will mean faster rides to catch art-house films in Uptown in Minneapolis or walk with friends at Bde Maka Ska.

Headed east, the new Bus Rapid Transit (BRT) line will get St. Paul residents more quickly to downtown than the current 21A (the slowest route in the Metro Transit system) and help avoid the 12-minute walk to the Green Line on University Avenue. For Minneapolis residents within walking or cycling distance of Lake Street, the B Line will supplement the #53 express bus that runs weekdays only from Uptown to downtown St. Paul for folks with traditional 8 a.m. to 5 p.m. work schedules.

Any wonder that I hope they brand this thing The Beeline?

Faster, more reliable service, nicer bus shelters and longer buses that resemble a “train on wheels,” according to Metro Transit community outreach coordinator Cody Olson: That’s all good news for a transit system that wants to increase ridership among car owners who have other transportation choices and see mass transit as a time-consuming hassle.

“The higher quality of the service, the more people will be interested in taking the bus,” regional planning professor Yingling Fan, of the Humphrey School of Public Affairs, told the Star Tribune just before Christmas.

The BRT is troublesome, however, for those who rely on the 21A — which boasts the second highest ridership of any route in Metro Transit’s system — to get to shopping or other destinations along University Avenue between Snelling and Hamline avenues in St. Paul.

The shiny new B Line, with its heated and lighted bus stops, real-time signage to indicate when the next bus is coming and pay-before-you-board efficiency, will eliminate the U-shaped “jog” in St. Paul that the 21A currently takes past Allianz Field and into the heart of Midway. Instead, eastbound buses would, under the current plan: 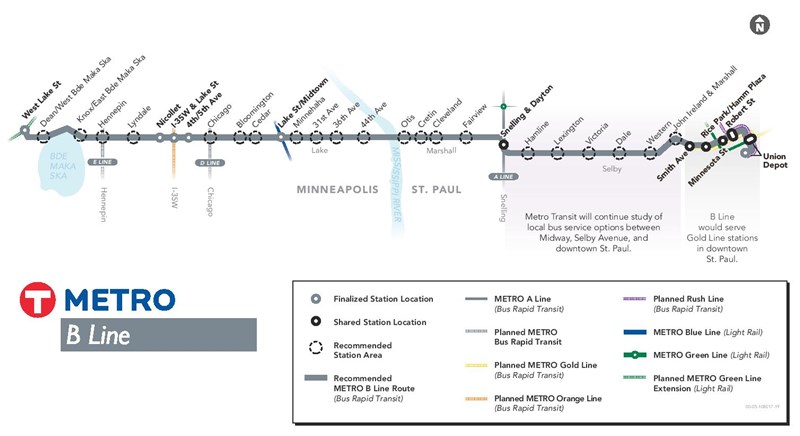 Proposed routing for the B Line. Image courtesy Metro Transit

Elimination of the Midway service prompted two members of the Union Park District Council board to cite “equity” issues on January 8 when they voted against the UPDC transportation committee’s recommendation to give full-throated support for the considerable government funding that the B Line will require to launch in 2023. (See this helpful article in the Saint Paul Pioneer Press.)

“Metro Transit needs approximately $60 million for full implementation,” Olson told the transportation committee at its December 2019 meeting, held at the University of St. Thomas in St. Paul to attract student and neighborhood participation. “We have about $25 million to date.”

The B Line would eliminate the 21D service from Uptown to St. Thomas (where I work) and reduce the 21A service to every 30 minutes between West Lake Street (past Bde Maka Ska) and Minnehaha Avenue, in the Longfellow neighborhood. From there, anyone heading east would take the B Line.

“With the jog to University removed, how would a person with limited mobility get to Office Depot, Cub [Foods] and some of the businesses on University?” an audience member asked Olson at the meeting in December. Olson said Metro Transit is “looking into local service options” between Selby and Snelling — an increasingly vibrant shopping and residential district — and the Midway.

Your feedback! By Friday!

To weigh in yourself, click here to take a survey or email project staff at BLine@metrotransit.org to request the survey in an alternate form. Feedback is due by this Friday, January 31.

Full disclosure: I serve on the UPDC board and its transportation committee, and as a regular mass transit user and St. Paul resident who sees our streets increasingly choked with suburban-size vehicles, I voted in favor of the B Line, enthusiastically.

13 thoughts on “B Line Feedback Needed by Friday, January 31”