Since buying a house in 2017, I’ve been planting trees. As of today, I have added 12 trees and about 37 woody shrubs, many of which are fruit- or nut-bearing. In a few years, these should provide a cornucopia of fresh food for both us and the wildlife. Right now, though, they produce almost nothing.

Working with tree crops requires a completely different temporal mindset than working with vegetables. When growing vegetables, you plant in the spring, tend them for a few months, and harvest later in the season. When growing trees, the timelines are written in years. Most shrubs, even if you start with nursery stock, don’t bear fruit until 2-3 years after planting and won’t reach maximum production for many more years after that. Trees can take even longer. The apple tree I planted on standard rootstock may take 5-8 to start bearing fruit. If I were to plant a shagbark hickory, a well-liked nut tree, my reference book informs me that it may take 40 years before it produces nuts. Forty years. I could have a child when I planted that tree, and that child might be older than I am now by the time that tree bears food. Once established, that tree could live and continue to bear nuts for 400 years.

It’s humbling to work on this sort of scale. I’ve been forced to confront my own impatience and reframe the project away from expectations of immediate feedback. Planning that far into the future requires careful consideration in designing these plantings, since once in the ground they are effectively permanent. It also requires me to imagine possibilities of what my future life might look like, and what I want it to look like. Many of these trees could easily outlive me, so at times this work also feels like building a legacy.

There’s a big catch, though. I mentioned it in the very first sentence, but you might have missed it. It’s “since buying a house”. Buying a house is a huge privilege that is simply not available to many people (and not preferred by everyone to whom it is available). 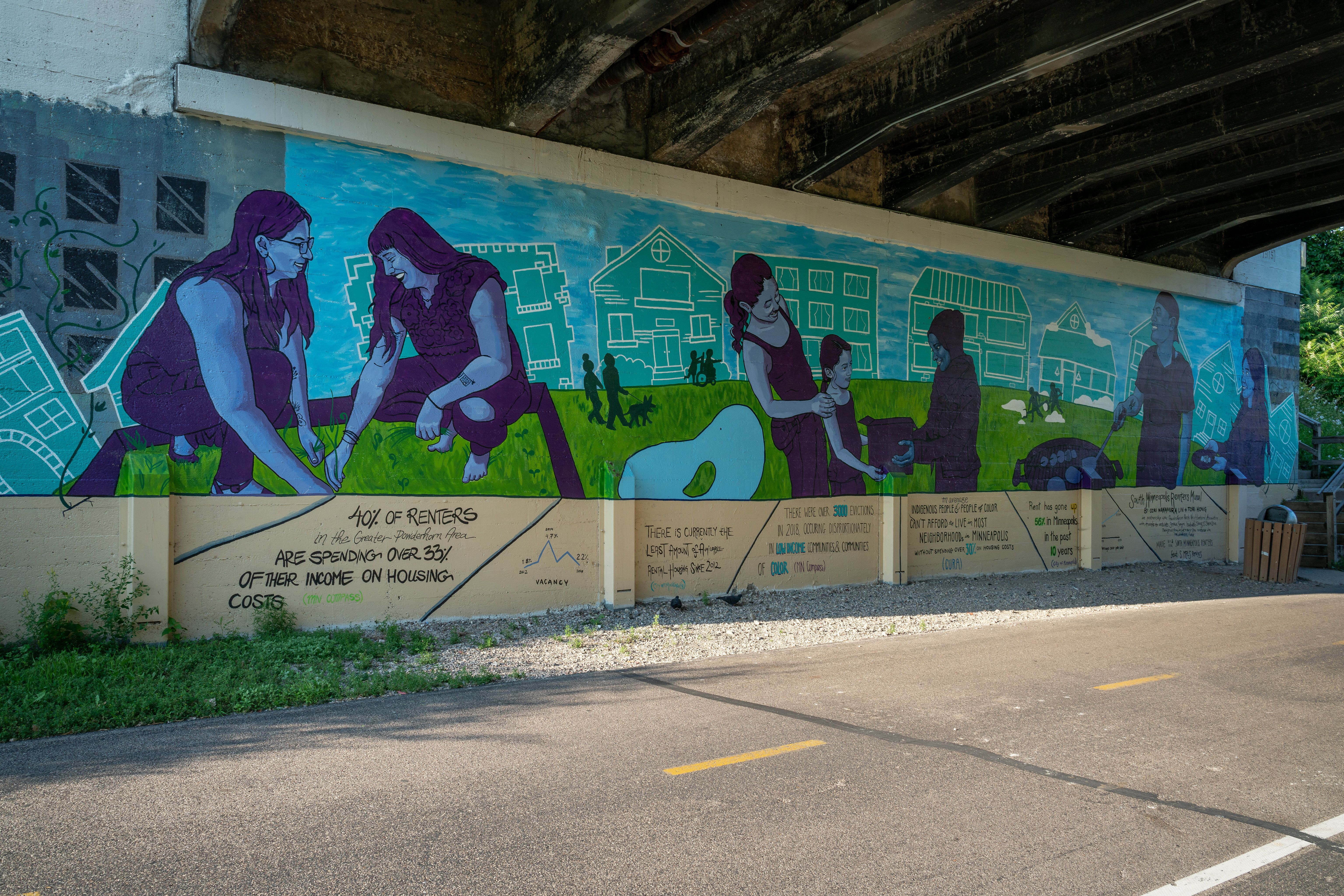 The ability to do this work hinges largely on my ownership of the land. If I were renting, I would need permission from a landlord who might not be easily sold on the idea of an experimental permaculture food forest. And even if I could convince them, would it make sense for me to invest a huge amount of time and money in a project that won’t see any returns for years? When I was renting, the longest I ever lived in one place was 2.5 years. Some of that was of my own choosing—after all, one of the benefits of renting is the ability to more easily move to be closer to jobs or accommodate changing life circumstances. Some of it was involuntary, though, like the time the owners of our rental needed some quick cash and sold the property, leaving us out of luck. Renting is always at least a little tenuous, and tenuous doesn’t mesh well with long-term planning and improvements. We want more people to be able to take active roles in food security, so what’s to be done?

Humans are a social organism. We don’t make our livings in isolation, we do it in communities of other humans. Where one person cannot always provide permanence and continuity, a community of people can. As much as I enjoy my private garden, a surer bet for having those hickory nuts land in good hands in 40 years would be to entrust them to the commons. Shared responsibility for resources provides insurance against any one person leaving, since the rest of the group will retain the collective knowledge and can teach new members. Human culture is founded on this communal passing-down of knowledge and skills, so we’ve had a lot of practice!

We have a number of models for this sort of community food trust already. Adams Grove is a young orchard on a previously underutilized triangle of public land, planted and maintained by a group of volunteers. Frogtown Farm not only operates a working farm, but provides community events and educational opportunities, which are vital links in effective community stewardship. Community gardens have long existed as a hybrid model of individual plots with communal oversight and resources, and some like Bancroft Meridian Garden are now starting to experiment with permaculture and new forms of use. The Dowling Community Garden operates on a site that also includes an orchard, woodlands, walking paths, and a school. When you view it through a lens of community stewardship, it makes a lot of sense to co-locate all those things!

There’s more we can do, though. Our public parks are groomed for appearance but rarely productive use. Why not start planting fruit and nut trees on public land? The parks department has the forestry expertise to care for them, and after all, governments are just an extension of community will. When the future of the Hiawatha Golf Course was under discussion, a food forest was proposed as an alternative use of that land. The pro-golf advocates managed to hold on to their claim, but asking those questions is the first step to reconsidering what the best use of public lands might be. Future discussions about our common spaces should include study of how else these places can contribute to climate resiliency and food security.

Let’s reach further, too, and see if we can expand what options communities have towards the spaces they live in. Can a food security argument be made against landlord-ship? It’s not as unprecedented as you might think. Christopher Alexander’s A Pattern Language was a hugely influential book about architecture, city planning, and the way humans interact with their built environment. The scope of it is staggering—the same book that describes a pattern for how to design a comfortable bench seat scales up to describe patterns on how cities should be governed. One of Alexander’s more radical proposals was the abolition of traditional forms of rental, which he believed “work against the natural processes which allow people to form stable, self-healing communities.” I find his words quite striking, so I will close with this pattern and an admonition that shepherding ourselves through the next lifetime of a hickory tree will take quite a few feats of imagination.

Give every household its own home, with space enough for a garden. Keep the emphasis in the definition of ownership on control, not on financial ownership. Indeed, where it is possible to construct forms of ownership which give people control over their houses and gardens, but make financial speculation impossible, choose these forms above all others. In all cases give people the legal power, and the physical opportunity to modify and repair their own places. Pay attention to this rule especially, in the case of high density apartments: build the apartments in such a way that every individual apartment has a garden, or a terrace where vegetables will grow, and that even in this situation, each family can build, and change, and add on to their house as they wish.

9 thoughts on “Food and Permanence”