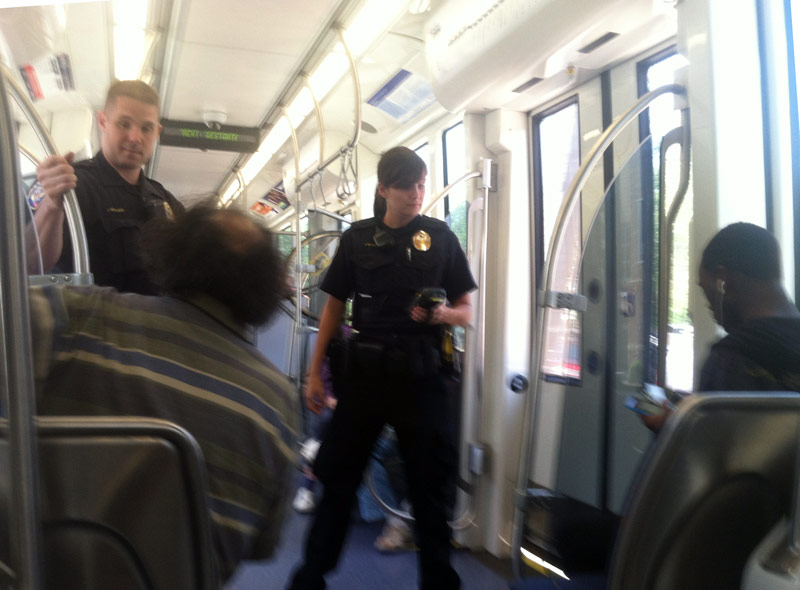 It probably seems like years ago. But, in actual time, it’s only been four months since February 2020. That’s when the Minnesota Legislature began debating a policy to change policing on Metro Transit trains and buses.

At the time, the debate centered around a “law and order” narrative. Everyone at the capitol seemed to agree that crime was a serious problem on Twin Cities trains and buses, and both parties at the legislature introduced policies to deal with public safety in the Twin Cities transit system. As you might expect, the proposals differed widely: Democrats wanted to create a set of “ambassadors” to deescalate social problems; Republicans wanted more police and penalties for gang members. The dueling press conferences were testy, to say the least.

[From Fox 9 News; Go to 2:00 to see the story about the grandpa from Lakeville.]

As the session came to a close in early May, negotiators proved unable to reach a compromise on changes transit policing, and, as is the case with much legislative policy debate, nothing actually happened.

Since then, of course, much has changed. The COVID-19 pandemic has gutted government budgets, increased the precariousness of people experiencing homelessness, and shrunk transit ridership to a tiny fraction of former levels. And following the killing of George Floyd by four Minneapolis Police Officers on May 25th, and the demonstrations and arson that followed, communities all over the world have begun a protracted, public debate over the role of police in society. The moment seems right to revisit the public safety reforms for transit. But whether that happens, and what those changes would look like, remains up in the air.

Policing on Trains and Buses 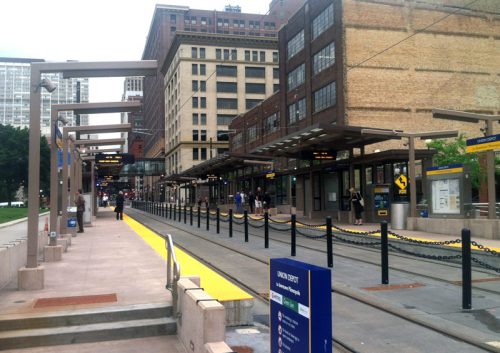 Before the pandemic, murder, civil unrest and demonstrations, the conversation about transit and policing centered on policing approaches and punitive measures.

On the one hand, the House Democratic legislation, authored by Representative Brad Tabke aimed to try and reduce the amount of actual police presence on metro area trains. Initially, the proposal would have reclassifying fare violations and funded new transit “ambassadors” to be deployed on trains and buses, equipped and trained to deal with social nuisance issues like smoking, fare evasion, visible intoxication, or and other problems that normally would require Transit Police.

In the DFL-controlled House, the committee debates over the transit ambassador proposal turned into a heated back-and- forth over how best to deal with crime and perceived disorder on Twin Cities light rail.

For example, in one committee hearing, Rep. Linda Runbeck, one of the House Republican leaders on the Transportation Finance and Policy Division, declared:

Runbeck’s amendment, which she later withdrew, would have called for at least one police officer to be on every light rail train, who would “remove immediately the bad actors” before they became a problem.

As the proposal went through the House and Senate, a bipartisan compromise was reached that would have instituted part of Tabke’s initial proposal alongside stricter enforcement measures such as escalating fines for citations and six-month or year-long bans from transit following convictions.

According to Tabke, the bill was withdrawn during final session negotiations with the Senate.

The whole thing kind of tanked; it was extremely frustrating. Many folks in the Senate are very supportive and would like to see this done sooner than later. We had a compromise bill that was supported. We were ready to go in the House, and we thought we had support in the senate.  We are very committed to still getting this done.

But Tabke is the first to admit that the conversation has changed since early May, even if legislative progress has stalled.

What Should Police do on trains?

As the light rail system has increasingly become a space of shelter for people experiencing homelessness, the issue of comfort and safety on Twin Cities transit has become a central narrative in political debate. As a result of the chronic housing issues and current approach to public safety, Metro Transit Police have to deal with everything from fare evasion (estimated to be as much as 20% of light rail riders) to nuisance issues such as sleeping or smoking, harassment to people dealing with substance abuse. This is not to mention the thankfully rare instances of actual violent crime on the transit.

How these various concerns are prioritized makes a huge difference for ensuring everyone’s safety and security on the bus or train, and puts the Police Officers into a difficult position.

That’s the focus of a study released earlier this year by East Metro Strong, a Saint Paul-based transit advocacy partnership, and a local consultant.

“In response to legislators requests, and requests from the East Metro Strong board, we commissioned this work,” said Will Schroeer, the head of East Metro Strong who was a co-author of the report on transit and policing. [Learning from Rider Security and Service Programs, Final Research Report, April 28 2020]

The report looks at how other transit agencies around the country have tried to reform the sometimes-punitive transit police systems by shifting how fares are collected, or how their riders are connected to social services.  The big takeaway, according to Schroeer, is that police are not always the best solution to the problems posed by transit security.

“Across the country, other transit agencies have faced similar challenges, that Metro Transit is facing,” he said. “[They] have responded to those challenges by deploying non-sworn police officer staff, and that mouthful contains couple important distinctions. The staff they deploy may be part of the P.D., but not be sworn officers. Or maybe they are unrelated to the transit P.D.. There are different ways and models to go about that.”

During the legislative debate, the report helped to put Tabke’s “transit ambassador” proposal into context. Following programs in places like San Francisco Bay Area and Seattle, the report suggests shifting policing of fares from a “traditional police approach” to a “customer-oriented enforcement” that would decriminalize fares, treating them as the equivalent of a parking ticket.

For people who have been focused on transit safety for years, the proposals were a welcome start.

“Right now a lot of what the police do is just fare enforcement, which doesn’t alway make the system safer for everyone who rides it,” explained Amity Foster, one of the leaders of the Twin Cities Transit Riders Union, who advocate for a fare-free system across the entire metro. “For us, having something like the transit ambassador program is a step in the right direction.”

As the bill changed, and a lot of the alternatives to policing were removed, Foster wound up disappointed with the outcome.

“It ended up getting pretty watered down,” said Foster. “We think a real ambassador program is one where the folks in it are trained to deescalate, where they’re given the resources they need to provide real safety to people on the bus and train.”

Since the killing of George Floyd by Minneapolis Police Officers,  the original goals of the legislation have been rekindled, and the conversation has turned away from what Rep. Brad Tabke calls “more punitive measures.”

During the recent special session, DFL and GOP leadership had seemed to agree on a reduced, compromise position that Tabke calls the “administrative citations.” The policy change would shifted fare evasion citations from a criminal misdemeanor to an administrative citation, with a table of escalating fines for repeat offenders. It would kept the thousands of fare evasion citations from clogging up the court system, without reducing the effectiveness of the enforcement.

But as the negotiations progressed, according to Tabke, Governor Walz re-introduced the original ambassador program back into his final proposal. When the Republican-controlled senate balked, that killed transit police reform legislation for a second time.

Even now, Tabke has not given up hope.

“I am cautiously optimistic there are many folks in the senate who clearly understand that this is an important thing to get done,” he explained, when asked about the possibility of a second special session occurring later this summer. 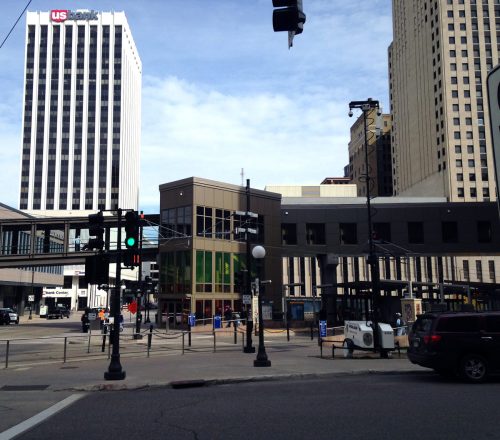 A police camera at Central Station in Saint Paul.

In the meantime, even as police reform and abolition conversations are enveloping Minneapolis City Hall, Metro Transit Police are still expected to be the one-size-fits-all solution to security on the light rail on Hennepin County Government Plaza. The vision of a transit system that relies on ambassadors, equipped with Narcan and de-escalation training rather than guns and armor, seems just over the horizon.

And for others, riding the bus every day, a future of enforcement-free transit remains the goal.

“Making fares free would reshape role of police,” Amity Foster of the Transit Riders Union told me. “The current system of policing is clearly not working; they don’t fully meet the needs of the riders.  And drivers also need to be safe. We need a system that works for everyone.  Having a fare free system and a transit ambassador program, like transit reps who are trained in de-escalation, who have access to resources like mental health providers, would make the system safer across the board.”

Ambassadors are also a huge step for Will Schroeer who is thinking these days about COVID-19. Back in May, Metro Transit added a mask requirement for all its riders. But how to enforce this policy or whether the agency has funds to hand out masks to those who need them is another story.

“The need for [ambassadors] on transit is even more now,” said Schroeer. “People have been extraordinarily cooperative with Metro Transit’s request to not ride if you’re not essential. But as we start returning to work and to play, a city only works if a certain number of people are on transit. And for folks to feel comfortable getting back on transit having some of these staff on board would be helpful with that.”