Yesterday, we received the dismal news that the promised route for the Bottineau Blue Line light rail extension was only a dream, and that dream is now officially scuttled. What is more troubling is that $129 million in local, county, metro, and state funds were spent on engineering and planning the project when rail company BNSF had not signed an agreement with Metro Transit and Hennepin County to use 8 miles of its rail corridor. That’s right, $129 million in our local tax dollars — no federal dollars — on a project that hadn’t yet secured a right-of-way necessary for its design.

This fiasco got me thinking, what could that local funding have done instead? A recent example of a transit project that was completed on time and on budget was the METRO C Line bus rapid transit route. Bus rapid transit, or “BRT”, is where larger buses stop at improved stations that allow for paying fares before boarding and rolling directly into the bus without a step-up, just like with light rail transit. Because of this, BRT offers many of the same benefits as the light rail system without the steep capital investment that light rail requires. For example, the 8.4 mile C Line BRT route with 20 stations cost only $37 million, and took less than two years of construction to complete. In comparison, the Green Line light rail project had a total budget of $957 million. 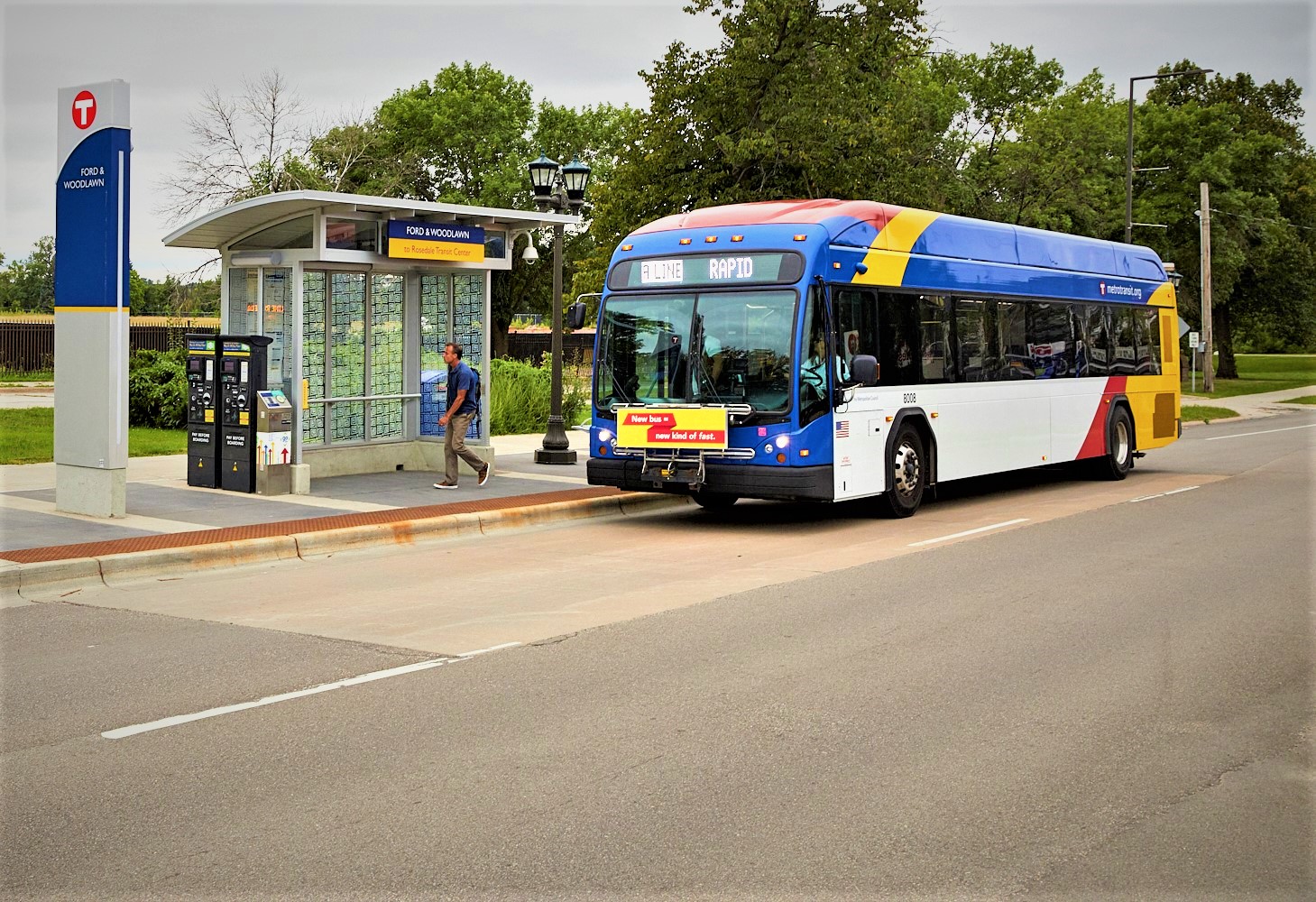 A Metro A Line bus at Ford and Woodlawn. Photo: Metro Transit

Now, you may be thinking “but surely the Green Line has higher ridership?” That is true. In the fall of 2019, before the pandemic, METRO Green Line averaged 47,538 weekday riders. The METRO C Line, by contrast, had 6,849 weekday riders over the same period. (I have copied that data into a Google Sheet here.) Just looking at those engineering, planning, and capital costs, however, the Green Line costs about $20,131 per weekday rider while the C Line is only $5,402 per weekday rider. In other words, we could have bought a new Toyota Corolla for every weekday C Line rider for the upfront costs of the Green Line.

These numbers really highlight how far the $1.5 billion dollar Blue Line Extension budget could go if it were instead invested in more cost-effective transit options such as BRT. A $1.5 billion investment could pay for over 40 new BRT routes. If all those were as successful as the C Line — and granted that’s a big if — a $1.5 billion investment into new BRT routes would serve an additional 277,000 weekday riders. Given that the A Line BRT, a suburban route, had 5,675 weekday riders in the fall of 2019 and a lower project cost of only $27 million, we could expect additional investments into new suburban BRT routes to support an even higher number of additional weekday riders.

“Check out a sneak peek of the beautiful artwork by
@MelodeeStrong
that will be featured on posters for the opening of the METRO C Line! Be there on June 8 to see the full poster and get one for yourself! 23 days!” — Metro Transit

There are many factors going into these calculations, and these are undoubtedly very complex decisions. However, I think it is important to start from a common set of facts, and it is clear that BRT has many of the same benefits of light rail at a far lower cost to build. The $129 million that was spent on the botched Blue Line Extension could have funded three new BRT routes based on the cost of previous BRT routes.

As several people have noted on Twitter, it is well established that not all transit riders are treated equally. Let’s treat this multi-million dollar boondoggle as a sunk cost and focus on finding more cost-effective transit solutions that are going to better support transit-underserved communities.

What are your wheels? What’s your favorite Metro Transit route? Share your insights and your hot takes in the comments.