In the last couple months, planning staff at St. Paul have continued to advance smart and effective reforms to our city’s planning and land use system. Their most recent push, which is slated to be discussed by the City Council this month, will remove an undemocratic and ineffective barrier to small-scale development.

City staff wrote an impressively thorough study on the topic, complete with a snippy title: “Zoning Study of Consent Petition Requirements for Certain Zoning Applications.” Essentially, certain types of developments require the applicant to attain signatures in support of the project from at least two-thirds of property owners within 100 feet of the property. City staff is proposing eliminating this petition requirement for nonconforming use permits — when proposed buildings don’t fit within the land’s existing zoning code — and conditional use permits — in this case, for “carriage house dwelling and reuse of large structures.”

Here’s how the petition requirement works: when developers want to build things that don’t fit the land use regulations of their plot, they need the St. Paul Planning Commission to approve their development. For certain types of developments, such as those described in the paragraph above, that developer must get signatures on a petition from nearby landowners. For example, a developer that wanted to build a duplex in a single-family neighborhood would need to get more than two thirds of the landowners within 150 feet of her unit — homeowners, landlords, condominium owners, business owners — to sign her petition agreeing to the development before she could even take the next step of going to the planning committee.

As the city’s study helps demonstrate, the policy is deeply flawed. Eliminating it would clear another barrier from our clogged planning pipeline.

The property is effectively a neighbor’s right to veto these specific types of development. However, this right to veto is kept out of the hands of renters. I’d guess this comes from the all-too-commonplace sentiment that property owners have a larger stake in their neighborhoods than renters. Already, this is a strong reason to amend the requirement.

But even if the policy didn’t have the anti-renter exclusion, it’s a deeply inequitable policy. As I’ve written about before, housing development suffers from a dynamic in which concentrated groups (e.g. nearby homeowners) that are more heavily impacted by a development will push hard to block development, preventing new housing’s widespread benefits from coming into existence. This policy cranks that dynamic to its most extreme — a group that consists only of property owners within 150 feet can block certain developments before they ever get seen by district councils, news media, or members of the city council. From the city’s report: petition requirements “give disproportionate power to a limited number of property owners who are not elected.”

So, the policy is inequitable in how it privileges a small group of homeowners. It’s inefficient in that people living within 150 feet of a development can’t properly weigh a project’s costs and benefits. It’s undemocratic in that these homeowners have no accountability to the perspectives of other people who might benefit from these developments.

A couple of particularly striking examples from the study highlight the flaws of the petition requirement.

In one instance, an immigrant was trying to open a corner grocery store, a use that required a petition. Across the street, there was another small grocery store, and the incumbent store owner refused to sign the petition because it would be competition to their business. The would-be grocer did not get enough signatures and was unable to bring their proposal to the planning commission. As a result of this petition requirement, an immigrant was denied a business opportunity and a neighborhood was denied a grocery store.

In another one, a Black immigrant purchased an old triplex in a neighborhood that was later zoned for single-family. The triplex had been condemned, and in the process lost its inherited status as within the zoning code — if the owner wanted to fix up the property, they would need a conditional use permit to build a duplex or triplex again.

Over at least three years, they made attempts to gather the required signatures from neighbors. The owner testified as such: “I was treated badly by several of these residents, and I am fearful to approach the others for my safety.” Furthermore, the owner believed that this opposition was race-based, as both the owner and their tenants were Black. The owner was never able to get enough signatures to make the property back into a duplex or triplex.

In both instances, the petition requirement proved inequitable, inefficient, and undemocratic.

The petition requirement has actually been waived since a temporary executive order was passed in March 2020, providing a useful case study of a world with less development petitions. Since then, a host of beneficial uses have been approved: duplexes, a theater teaching studio, an expanded restaurant dining room. 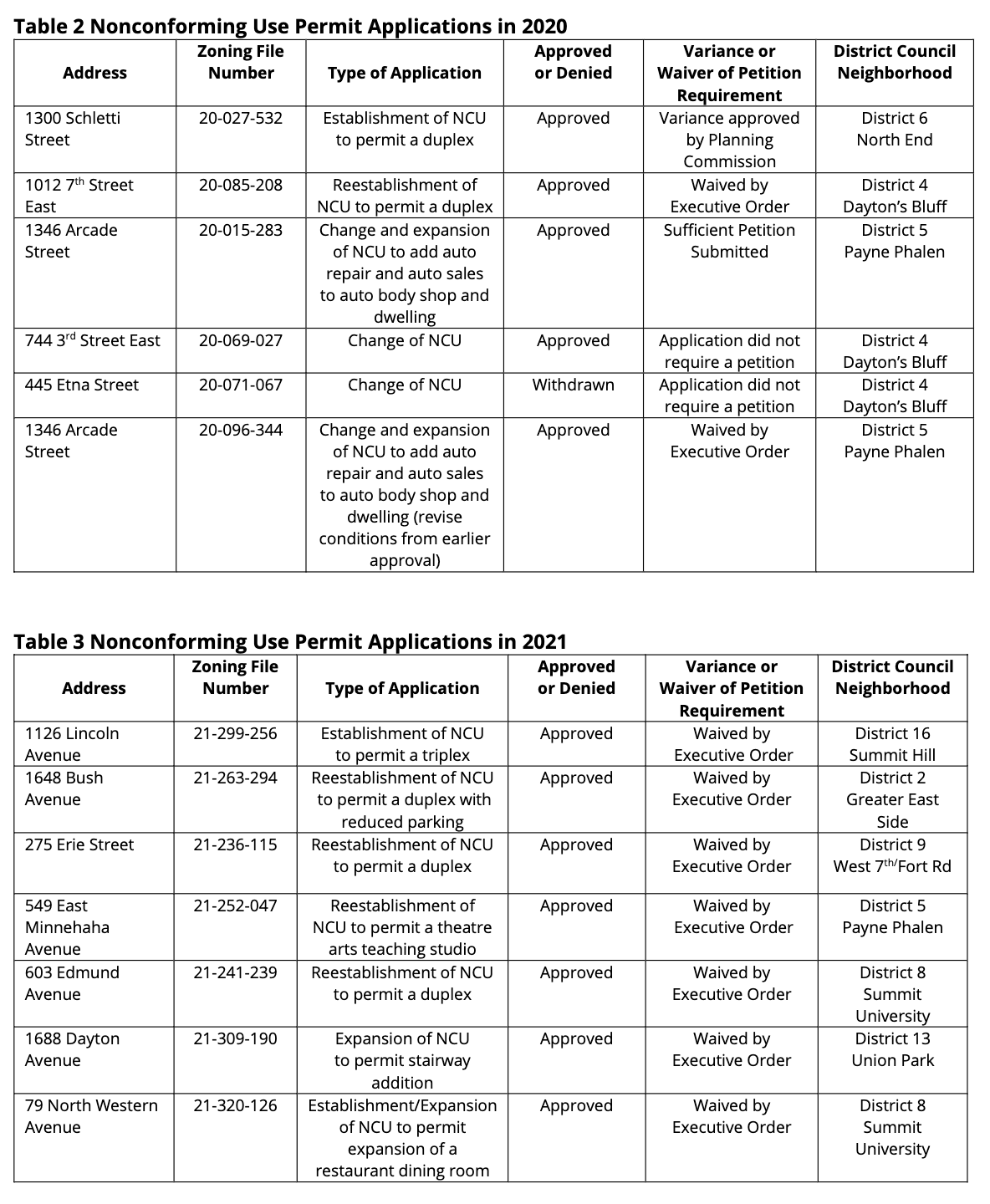 It’s also useful to note what didn’t happen when this requirement was waived. We didn’t see a sudden wave of people abusing the waiver to destroy neighborhoods with their new developments. Developers still have to come to the planning commission for final approval of their nonconforming use, meaning that there are still guardrails against bad developments. There’s just no right to veto for an extremely concentrated group of people.

It’s a small change — with this quantity of duplexes and business expansions, we’re not talking about reshaping the housing market or the small business landscape — but it’s a good change that clearly benefits people. Given the existing housing shortages in St. Paul and other cities, we should be racing to grab these types of low-hanging fruits in the planning process.

The study has now progressed through the bureaucratic-political process — presentations to district councils, a planning commission meeting — and the City Council is going to hold a public hearing on the issue on July 27. It’s time now to continue our momentum and keep making positive changes for the city. People should be sending letters to their city council members to get this change made.

We should also commend the planners that made this change possible. Planner Katy Dadlez has led this project, and it’s important to recognize the value of the work that planners like Dadlez have been doing. In the past two years, St. Paul planning staff have moved the city forward on eliminating parking requirements, Summit Avenue redesign, and zoning for more city-wide, small-scale density. They’ve coolly taken vitriol from public commentators, produced excellent research, and often been strong voices for improvements in our city.

We can keep on supporting their work across St. Paul’s system of governance. Show up to public meetings, write letters to the planning commission and your district council. Then you can get your friends to do the same. Supporting these technical planning reforms is an essential piece of achieving housing abundance in our cities.

Photo at top courtesy of Zillow

4 thoughts on “More Smart Land Use Reform in Saint Paul”