This post is about streets and stores. But let’s begin with chickens and dogs.

Chickens smell. Roosters crow. Dogs bite, bark, poop and escape from yards. Despite these problems, chickens and dogs bring eggs and companionship. If you want to keep chickens or dogs in Minneapolis there is a straightforward process to obtain a license, and if your animals cause problems (the vast majority don’t), the city has procedures to remove the nuisance. But if you wanted to serve coffee or cut hair or teach yoga, most of Minneapolis is entirely off-limits, and the city provides no path for any commercial activity in “residential” areas. As is often noted on this website, other cities in Minnesota are even less flexible in their land use policies.

Zoning in Minneapolis — as in many American cities — over the past century has aimed to separate land uses perceived as “incompatible.” Key to this has been removing commercial uses — shops and offices — from areas marked as “residential.” Offices and shops are allowed mostly on busier streets, and on those streets only in select places. Hiding behind these policies is the idea that offices and shops are harmful to nearby houses. 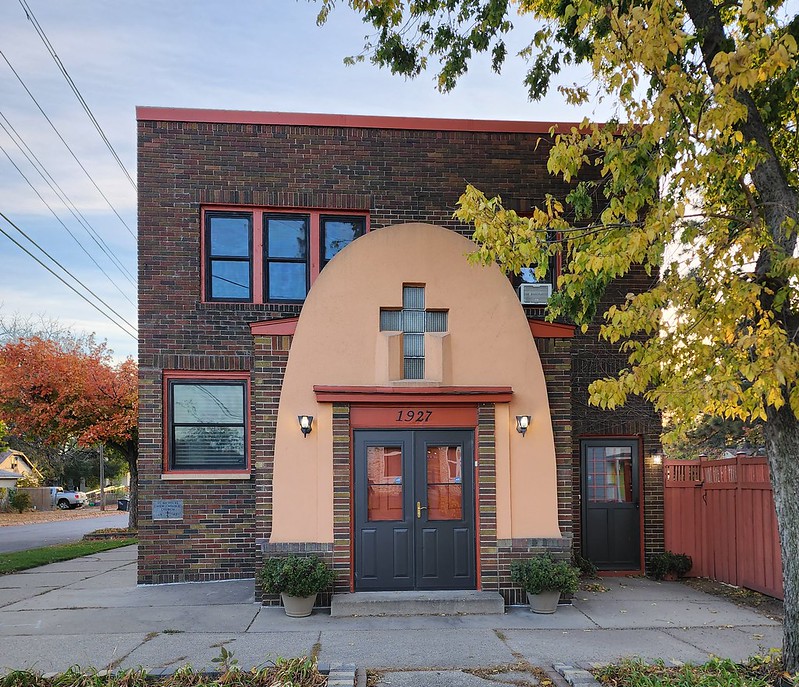 Before the current zoning policies were implemented, though, small businesses could be found throughout the city, a block or more away from streetcar or bus routes. The building pictured above at 1927 NE 5th St., for example, was a dry goods store from the 1920s to 1942 when it was converted to a chapel. It is now a residence. Despite the history of different uses, the city of Minneapolis would only let this building go back to being a church. Current zoning policies forbid commercial uses.

Across the street is another former store. For about 40 years, 2001 NE 5th St. sold plastering and lathing products. Now this former store sees intermittent use as a studio space. The continuous use is important, because it gives the owners or subsequent owners some legal rights to carry on with non-residential activities on the site. 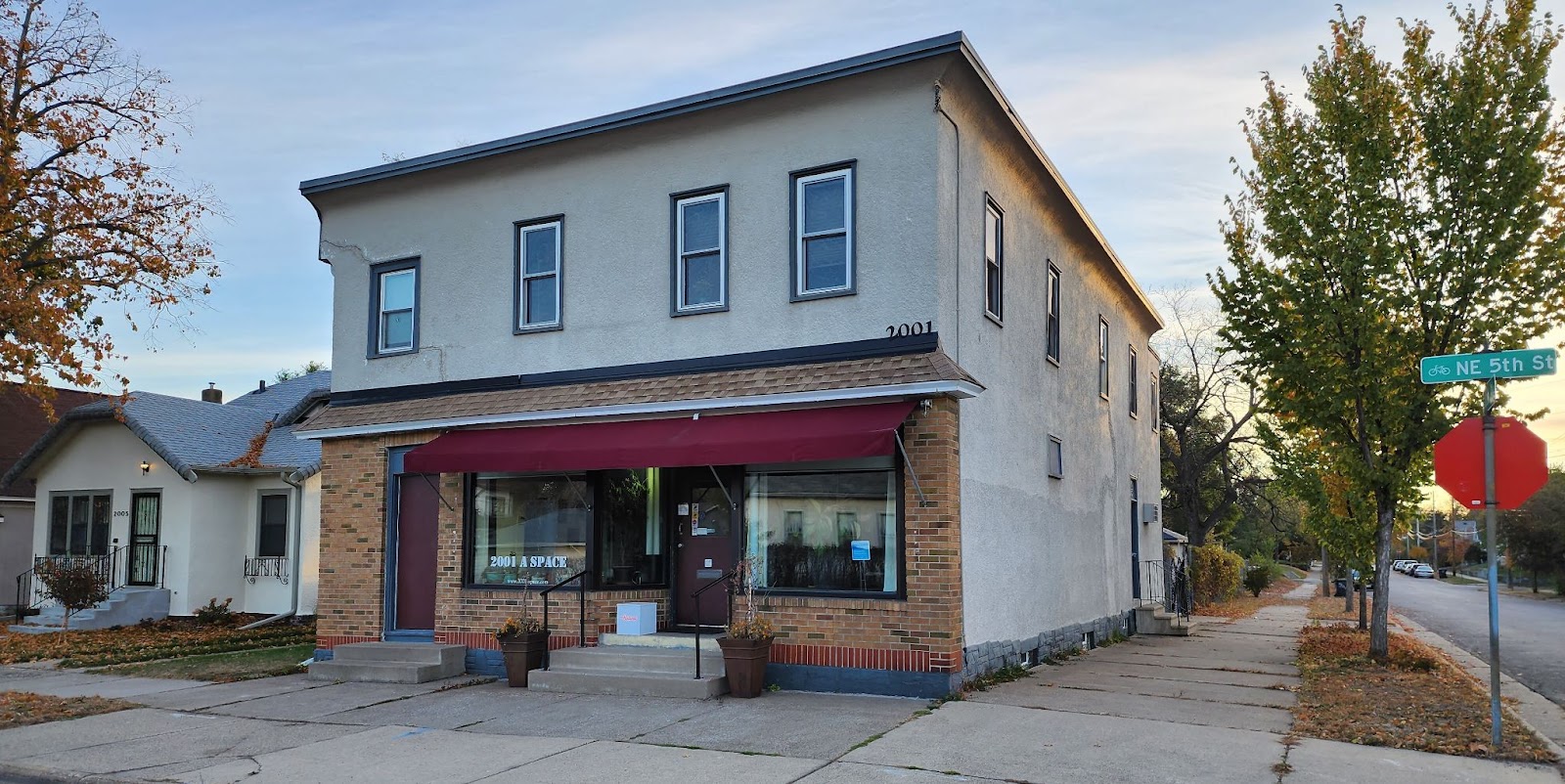 Buildings that used to be stores are all around the city, but many closed their doors between the 1940s and 1960s. A common hint that a building used to have a commercial use is proximity to the sidewalk, particularly on corners.

A slightly unusual wrinkle on this pattern can be found on Warwick Street in Prospect Park. The building’s history highlights some of the problems with the city’s rigid separation of residential and commercial uses with exceptions granted only for continuous commercial uses that have been “grandfathered” in.

130 Warwick St. began life as a grocery store. Somewhat unusually it is located in the middle of the block and set just a few feet back from the sidewalk. Indeed just a couple of houses down the street is a house whose front door is closer to the street. 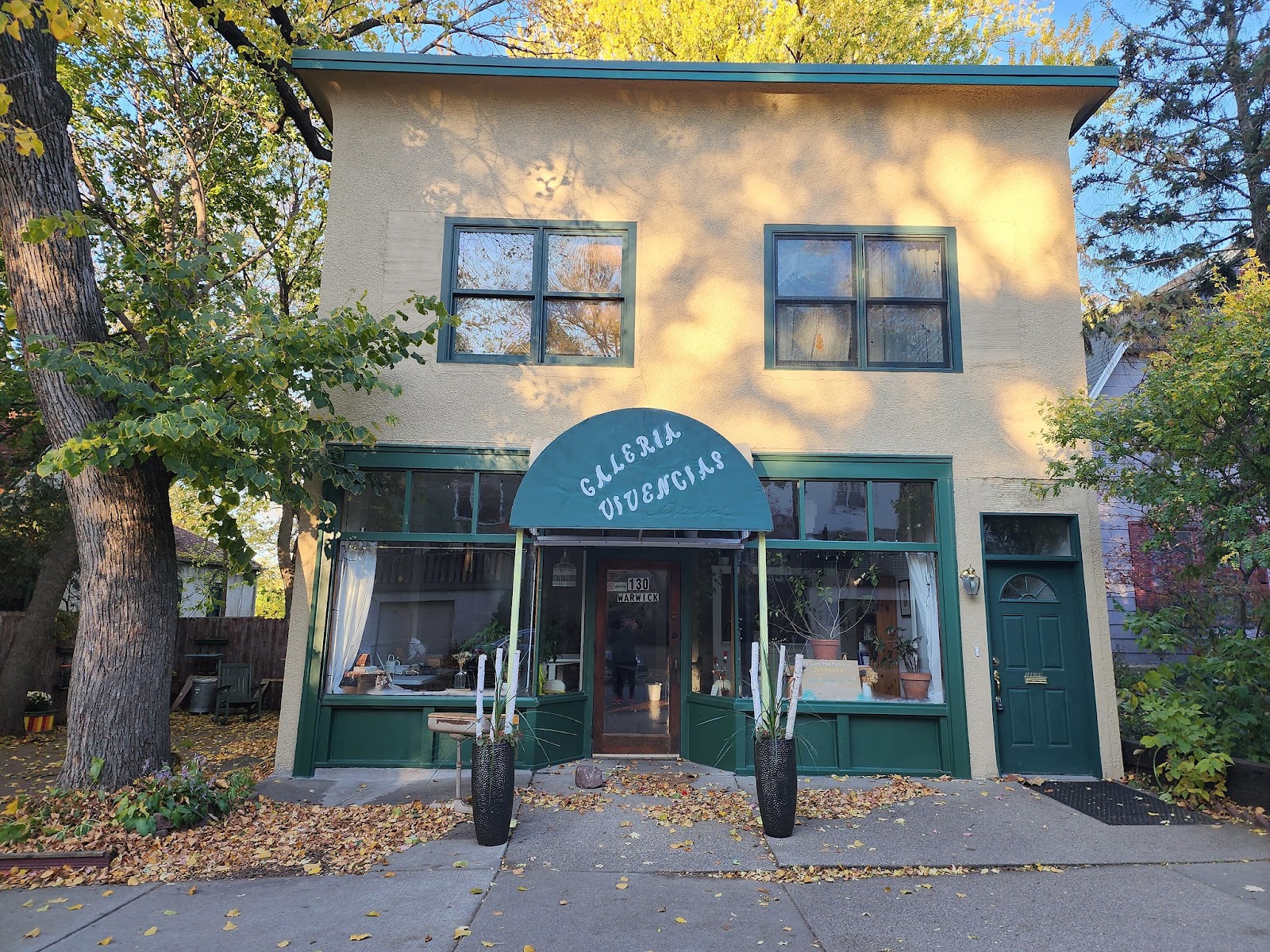 The nearest bus or streetcar route is a half block away on Franklin Avenue, which has no visible evidence of former stores. Half a block away there was another grocery store. From the 1920s to the 1950s this little area of Prospect Park had two small grocery stores, a short distance apart, and yet both were off the main road. 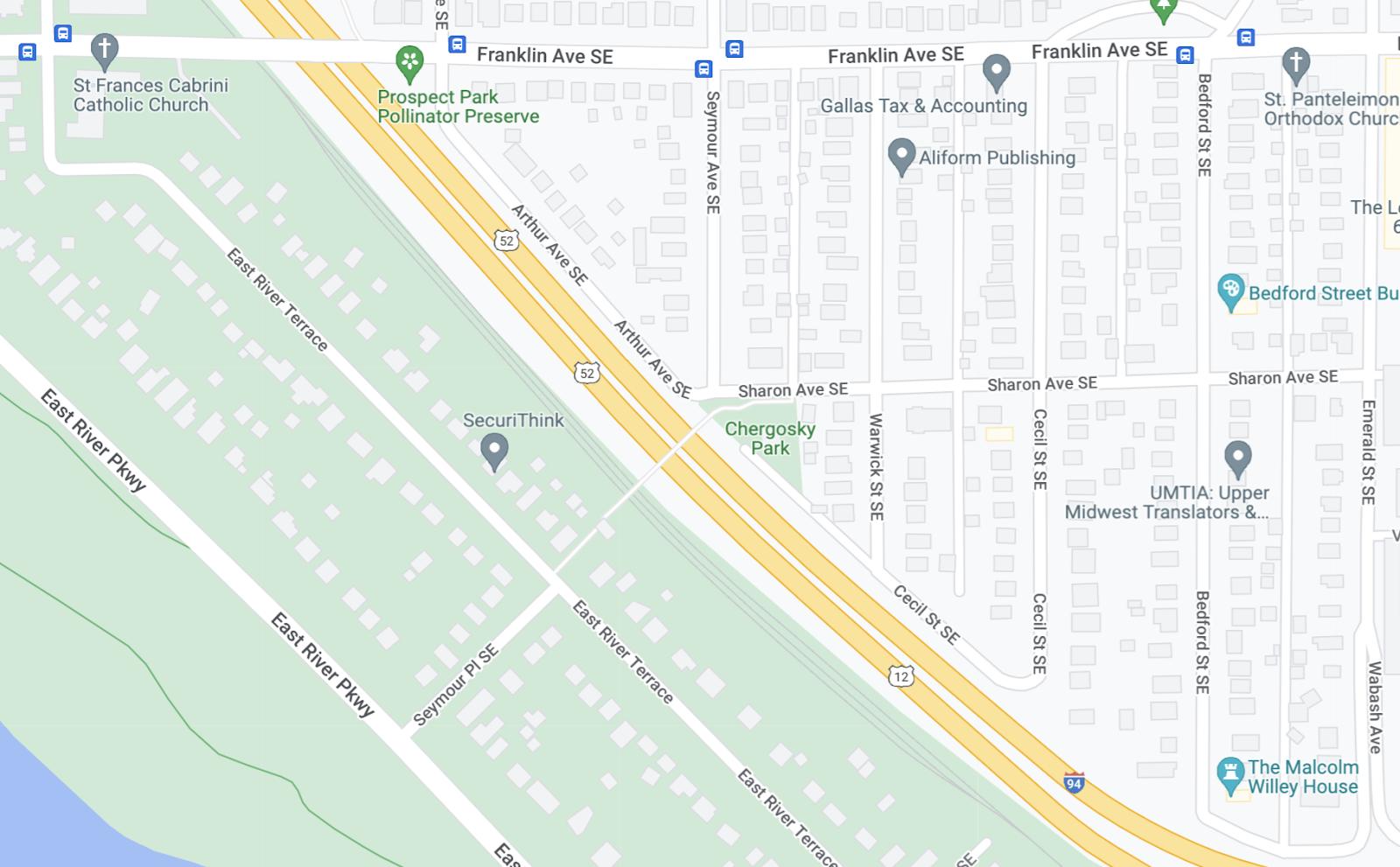 Details like this show how zoning has changed the way people think about where to locate small businesses. Before zoning, commercial activity was most likely to cluster in visible locations, with several stores around one intersection. In Minneapolis (and around the world), these were often at streetcar stops. But a significant minority of small businesses were located away from streetcar stops and off main roads. These locations were likely to have been cheaper, or just where the owner had existing property.

130 Warwick St. continued as a grocery store into the 1960s, but it too fell victim to the growth of supermarkets and processed food. With its history as a grocery store it housed catering businesses, and then in 2002 gained a new public-facing commercial life when the Signature Café opened. Operated by Nathalie Johnson, the café received good reviews until it closed in 2012. The hours were unconventional: weekend brunches and some evenings. Located off a main road, on a street with relatively little foot traffic, the Signature Cafe was a business that grew off word-of-mouth and media recommendations, neighborhood regulars and customers who discovered it online. Catering continued out of the building after the café closed until the building ceased to be a commercial space around 2018.

Stores can be converted into residences, as the first example of 1927 NE 5th St. demonstrates. But converting an open floorplan and open front windows into the layout of a residence is relatively expensive. Thus many former stores find use as artist studios and small offices, where they may not see many customers inside the building. Minneapolis city regulations are very restrictive: they limit home-based businesses in residential areas to serving just five customers per day in person: a regulation aimed at limiting traffic and parking.

A group of local residents purchased the former Signature Café building in 2018 and have been using it as an art studio. But the space was not being used all the time, and the internal layout still supports food service. The building’s outside patio can host several dozen people at tables or standing. A local resident who owned a commercial grade ice cream mixer proposed moving the mixer to the café building, and running a small ice cream business out of the space. A “Firepit Friday” neighborhood gathering in Prospect Park regularly attracted 50 to 60 people over the course of Friday evenings, hosted in people’s backyards and driveways. Zoning does not stop noise, commotion, bike parking, and a little traffic that has no commercial footing. An ice cream stand open initially on Fridays could grow from these neighborly foundations. The popular neighborhood gathering was outgrowing what could be done on donations and generosity. A food license for a small business would allow a popular activity to grow.

Despite the long history of commercial use of the space, a business proposal that amounted to little more than what was already taking place in the neighborhood, the city of Minneapolis rejected the application to base a small ice cream stand in the former Signature Café building. Because more than six months had passed since the last commercial use, the right to keep using the grandfathered zoning meant that it could not be re-established. Warwick Street was in a residential use zone, and residents had to be protected from the dangers of commercial activity near their houses.

While this is just one story about one building and its businesses, it illustrates how the rigid separation of commercial and residential uses in Minneapolis make it hard to start small businesses, and make it particularly hard to create small “third places”: privately operated places where people can gather and converse.

Minneapolis’ hard and fast rules that keep small businesses on main streets are not unusual in the United States. But American rules about small business zoning are internationally distinctive. Although we tell ourselves the United States is a land of free markets and commerce, our local governments restrict commercial activity to a much greater degree than in European or British influenced legal codes. In Germany, for example, cafés, convenience stores and hairdressers can be established in any residential area. In British-influenced regimes the overall impact of an activity is assessed when approving land use applications. The outcome is that small businesses have the opportunity to start in more places. But the streets are not overrun with businesses, because the market is limited, converting houses to stores or cafes is expensive, and many businesses will still want the visibility of being on a busier street.

Zoning in Minneapolis aims to protect residential neighborhoods from the imagined harms of having a cafe or a hairdresser next door. The city’s current proposals make it hard to expand commercial zoning, even immediately adjacent to existing businesses. In large areas of Minneapolis the nearest business is at least a 10- to 15-minute walk away. On the areas marked in beige there is no legal route to opening a café, corner store or even an ice cream stand that operates just a few hours a week. 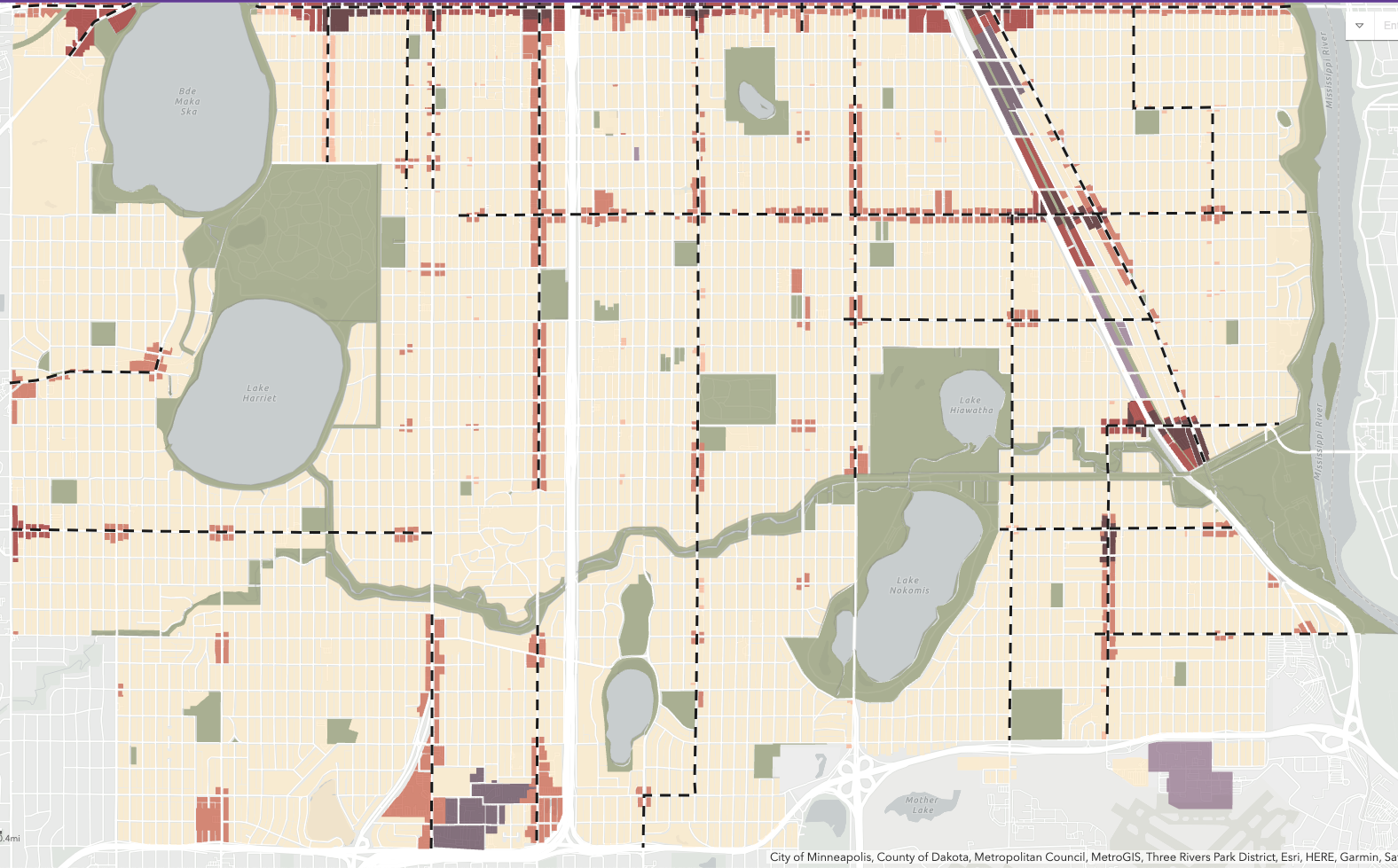 The result is that it is easier to keep chickens in Minneapolis than to open a café. Chickens used to be banned in the city because of the real, though small, effects of noise and smell on immediate neighbors. The rationale is similar to the ban on any café, hairdresser, or corner store operating in most of the city. But now, if you want to keep six or more chickens you just need the permission of 80% of your neighbors within 100 feet of your property. With chickens we’ve found a way to balance the benefits and harms of useful activities, and not allow fear of change and noise to veto good things.

In the city’s efforts to protect people from the noise and smells of commercial activity it has created neighborhoods with no prospect of ever having commercially operated community spaces or useful services. The time has come to learn from the chickens, and make policies that allow people to open a café, serve ice cream, cut hair, massage bodies and perform other harmless activities anywhere in the city. If you can keep six chickens with your neighbors’ permission, why could your neighbors not comment on whether a modestly sized business would impact them? If city inspectors can reasonably assess whether a dog is dangerous, why can they not also assess whether a home-based business is causing real harm?

As Minneapolis rethinks what it allows where, let’s imagine a city where we have more chances to create small-scale community commercial spaces and allow more people the opportunity to run a small business from their home.

What can you do to support complete neighborhoods in Minneapolis?