What with all the attention being paid right now to the struggling global economy, various wars, the 2012 electoral food fight, and Ben Flajnik’s underhandedness, the dawn of the robot car era may have slipped under your radar. Well, pay attention! Robocars (as I call them) have made a whole slew of breakthroughs in the past few years. They’re surprisingly close to appearing on a freeway near you. Anyone who wants to get up to speed need only check out Tom Vanderbilt’s rather glowing article in Wired. Vanderbilt is the author of Traffic, and one of the more thoughtful thinkers about the transportation system. If he’s impressed, we all should be.

It probably goes without saying, but compared to any of the glowing robocar pangyrics, my take is a bit more cynical.

Every time a text rings, someone may become an angel.

As Vanderbilt suggests, and as I’ve argued here at Streets.mn in the past, robocars point to a key paradox at the heart of 21st century society. There’s an unavoidable conflict between cars (the definitive 20th century technology) and smartphones (the definitive 21st century technology, so far). The more people are distracted while driving, the more accidents happen. That’s why it’s so eerie and problematic when companies like Mercedes start putting wifi in their cars and Facebook on their dashboards. That’s NOT a good idea!

The “cars vs. phones paradox” is perhaps one reason why a company like Google is investing so much time and money into robocar technology. For Google, not only is the robocar a great techno-utopian demonstration project, but it begins to solve a fundamental problem for internet companies. And Google isn’t alone. Car manufactures from Germany to China are focusing on robocars. Their very future may depend on it.

There are two huge problems, though, with the robocar concept in the real actual world. And other than a few brief asides, these problems aren’t really being talked about.

The first is the huge quantitative and logistical complexity of the US automobile system. There are over 200 million cars on the road in the US right now. We’ve gotten to the point, thanks to huge government investments spanning a century, where cars are a default mode of movement for almost every American, no matter what income level. Cars equal mobility and movement, and allow people to access jobs, food, schools and just about everything else too. They’re not a privilege in America today, they’re a right. That’s why gas prices, snowplowing, parking spots, and traffic jams are such hotbutton political issues. Many a political career have been built atop the automobile.

The massive number of cars involved – over 254 million registered – means that any new technology is going to take a long time to get implemented across the country. Think of all the old clunkers on the road. Think of all the cars that don’t receive proper maintenance. They aren’t going away. This doesn’t include the uninsured unregistered cars, which according to some estimates, are 16% of the cars on the road and rising dramatically every year. There are cars in my working class neighborhood that are literally held together with duct tape, or where the windows are plastic sheets.

All these facts mean that any change to the US auto system that’s as fundamental as the robocar revolution will not happen quickly or neatly or evenly. Robocars will create a two-tiered system of auto transportation that will be obvious and stark. There will be robocars for the rich – Mercedes-Benzes and Audis and GoogleToyotas – and used Hondas for everyone else. 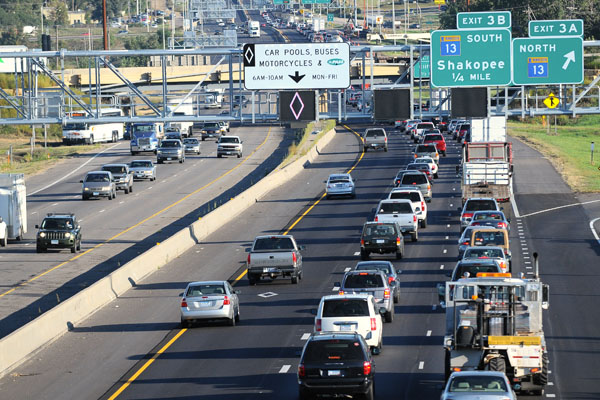 Is this just the beginning of a car segregation system?

Not only will this pose problems for the promise of robocars, dramatically reducing many of their efficiency and safety gains, it will create a deep divide within the social geography of our transportation system. It’ll be a lot like at airports, where you have different lanes for business travelers and the masses. It’ll be like the difference between limos and bus stops. In an era when more and more Americans are out of work, overworked, or facing decades of declining wages, spending increasingly precious tax money on transportation investments for robocars is going to become politically and socially problematic. It’s something that we need to think about.

At this point, you’re probably thinking that this is yet more neo-luddite social justice nitpickery. And, sure it is.

You’re probably thinking that, of course the transportation system is huge and complex, and populated with a billion (no exaggeration necessary) constantly moving independent variables, e.g. potholes and skateboarders, each different and unique and unevenly distributed throughout society. But, you might say, this is solvable given vastly improved supersmart technology and effective and sound government policy. (That second one is a big if, by the way.)

The second main problem with robocars, though, is potentially a dealbreaker. That’s the question of who is liable when something goes wrong.

There are currently 32,000 fatalities on the US roads every year, and over ten times as many injuries and accidents. Just as an exercise, multiply EACH of those incidents by a million dollars, and you start to get a sense of the potential liability of the US automobile system. (It’s mindboggling number in the hundreds of billions of dollars.)

I’m not a lawyer, but under our current political and social system, most of those potential liability dollars don’t exist. Almost all the fatalities and injuries on our roadways are classified as “accidents”. They’re seen as inevitable by-products of a road system that’s impossibly complicated, ubiquitous, and disbursed across hundreds of millions of different individual actors, all of whom can’t be responsible all of the time. We write off all these accidents as “the cost of doing business.” It’s a social choice we’ve made, a trade-off for the mobility and “freedom” offered by the car.

This whole system depends on the profound lack of responsibility at the center of the picture. This whole system depends on placing a inevitably distractible and semi-non-responsible driver at the center of the picture. (The exact responsibility of the driver is an area of much heated dispute, but our social and legal system has basically given drivers a free pass almost all of the time.)

What if every time your computer crashed, your car crashed?

But what happens when you take that driver away, and let them start to doze off or read the newspaper or surf the web? Who’s responsible then when something goes wrong? Sure, in a robocar society, accidents will be greatly reduced.

But they’ll still happen! (And, this is what none of the dozen or so robocar articles I’ve read don’t bother to mention.) Something will go wrong. With 200 million cars and millions of other changing variables, something will always go wrong. Nobody who’s ever seen the “blue screen of death” or the “spinning beach ball of stasis” can possibly disagree. (What happens when a robocar system gets too old, and doesn’t get maintained? What happens when a small part breaks, and nobody notices?)

Well, the obvious answer is: the car company / robocar software company. If GoogleToyota is driving your car, what happens when something goes wrong and your car runs over someone’s grandma? 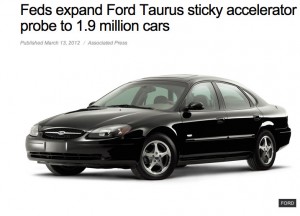 How many cars are recalled every year? How many more would there be if automaker liability was increased 100-fold?

A good analogy for this problem might be the US aviation system. Airplane crashes really disturb people, and for good reason. So, as a result, airplanes come with two pilots. And because even they doze off or use their computers while flying the plane, we have a ‘backup system’ costing billions of dollars in place, staffed by highly trained people whose only (very stressful) job is to coordinate 28,000 daily US flights.

Now multiply this problem by three or four orders of magnitude (1.1 billion daily auto trips), throw in a countless dogs and kids and deer and bicycle messengers and old ladies and out of control shopping carts and huge potholes and drunk drivers. How many air traffic controllers would you need?

The thing is, we already have an “air traffic controller” whose sole job it is to pay attention all the time to the world around them, and to keep their foot on the brake pedal in order to make sure that nobody is going to get killed or horribly injured by a 2500 pound steel machine moving at 50 miles per hour. That person is the driver. Do we really want to let them start taking naps?

There is a lot of promise behind the idea of robocars. But to my mind, most of the good effects of them seem to come from reducing the need for cars, not increasing it. For example, picture a world without parking spots. That world is possible with robocars. They can become a shared commodity, and not something that we all need to have all of the time.

Well, if that’s the great benefit of robocars, why bother? We already have a “robocar” technology that works really well, that allows you to surf the internet, sleep, or read while you travel. It’s called the bus. It’s called the sidewalk. It’s called a bicycle or a subway. All these things already exist!

For a time, my dad had a Cadillac Fleetwood Brougham with an “automatic trunk closing” feature. You would lower the lid of the trunk to a certain height, about one inch from the top of the lid, and then the car would “take over” and close the rest of the trunk for you. If that’s not the stupidest innovation in the history of technology, then you’re reading the Skymall catalog. Who had trouble closing their trunk in the first place? When the robo-trunk mechanism inevitably broke, my father had to spend a thousand dollars to fix it.

Maybe the robocar is a solution in search of a problem. If the problem is that our current road system is unsafe, unhealthy, bad for the planet, and incompatible with new technological norms, there are two roads before us. The first is to develop highly complicated new technologies that will “solve” the problem. While I’ve wary of the complexity of the situation, I’m not saying we can’t do this. Computers are amazing, the US is the wealthiest country in the world, with the best engineers and software designers you’ll find on planet Earth.

This is just one example of the road less traveled. If we go down this road, we start reducing our dependence on technology. Instead of robocars, let’s build cities that privilege people. Instead of thinking about ever more complex ways to depend on the automobile, let’s start thinking beyond it. To me, that’s a visionary future. It might not be as shiny, and it might not be up there with the Jetsons or Norman Bel Geddes’ Futurama, but it’s far more equitable, practical, and affordable than the robocar alternative. 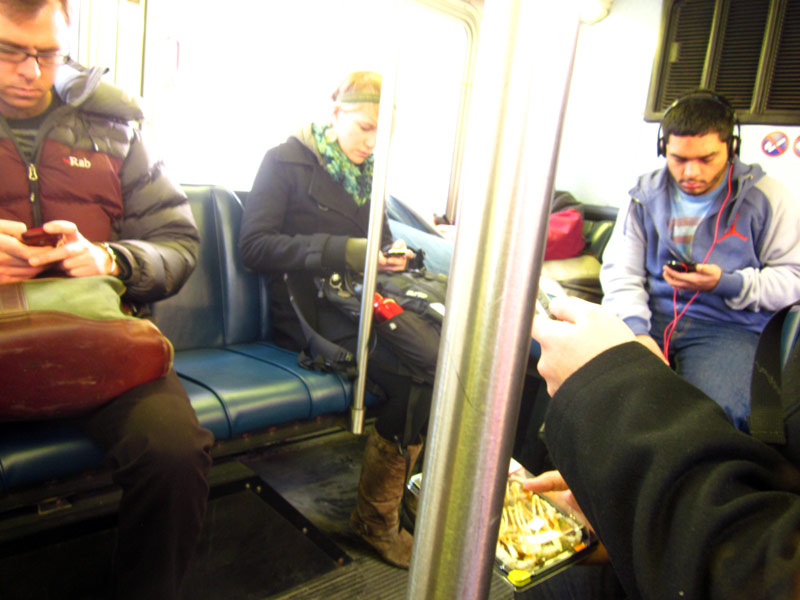 The robo-car of the future. (PS. I did NOT have them pose for this picture. This is how young people ride the bus.)

18 thoughts on “Cars vs. Phones: Why Robocars Will Not Save Us”