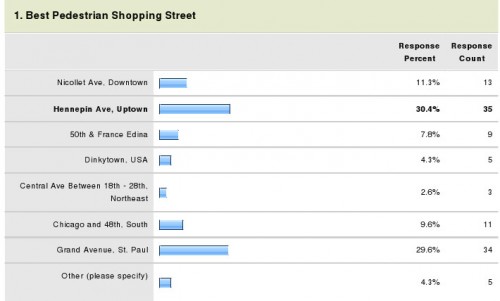 Welcome to the first annual Street.mn Best of The City Awards. Over the last week, we have over 100 people take our quick vote / survey about the best and worst of planning and urban design in Minnesota, and the results are in! Over the next two weeks, we’ll be sharing with you a delightful list of quasi-democractic accolades. We hope you enjoy them!

The first result is the award for Best Pedestrian Shopping Street, obviously one of the most prestigious awards in any urban competition.

The Twin Cities has a host of pleasant strolls, places where you can wander down a sidewalk and lose yourself. And, despite the weather, window shopping is never so fun as during the Christmas season.

This year, while streets like Chicago Avenue South and Nicollet Avenue got almost a dozen votes each, this award came down to a photo finish between the two streets that most epitomize the Twin Cities wonderful mix of dense urbanism and single family homes, high-profile national chains and electic local businesses. Both of these candidates run through the heart of wealthy residential neighborhoods, while attracting urbanophiles from all over the metro area with their mix of culture and craft.

This year, St Paul’s Grand Avenue lost out by a single vote to Minneapolis main street juggernaut. This year, the award for best Pedestiran Shopping Street goes to… [pause for drama]…  Hennepin Avenue! 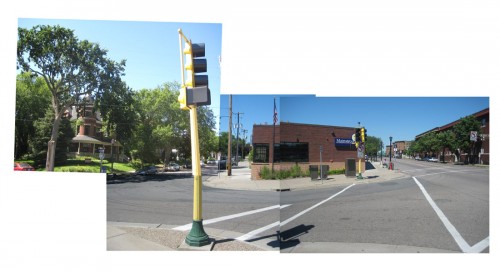 One of the Hennepin Avenue crosswalks.

(I’d like to thank the committee. I couldn’t have done this without you…)

A walk down Hennepin Avenue is the definitive Minneapolis experience. Try it yourself! Begin at the corner of Franklin and Hennepin, and head down the street for a mile and a half, turning around just past Lake Street. This walk  will take you down the most historic, most dense, and most unique street of the city.

Much like Broadway in Manhattan, Hennepin was originally an old indian path. That’s probably the reason why it’s one of the few streets in the city that dares to run counter to the rectiliinear street grid, creating all kinds of odd and intriguing angles. Strolling south, you’ll find yourself walking along a dozen different unique corners (like this one), places that open up like books to be explored. As you walk, the city around you will ebb and flow, gradually quieting down from dense corners lined with four-story apartments into more residential neighborhoods where the sidewalk is fronted by old wooden duplexes boasting porches. Finally, the street unfolds upwards into the heights of uptown Minneapolis. There you can feel the excitement of the Lake Street corner, often filled with people and street life. Here Hennepin overflows with history and future: theaters old and new, a wonderful bookstore, nice new developments, the city’s best urban mall, and a continually changing cast of stores from around the world. There is no better stroll for hundreds of miles in any direction. 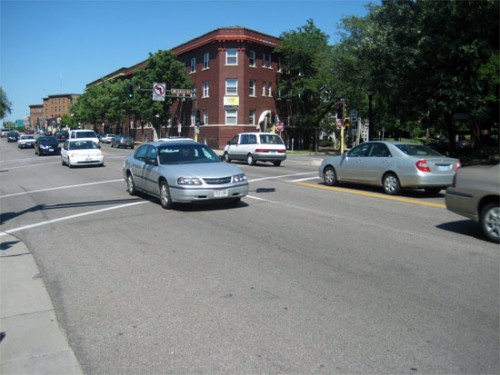 Most of Hennepin Avenue is devoted to car traffic.

And that’s really the secret to Hennepin Avenue’s sidewalks. It combines continguity with the rarest of Twin Cities commodities: density. While our fair cities have a lot of nice little mixed-use shopping corners left over from the city’s streetcar days, there are precious few streets that truly feel urban. Hennepin Avenue is one of the only places where I really feel like I’m walking in a big city, where you can experience that anonymous electricity commonplace in Chicago or San Francisco. Walking down Hennepin, you swim through the blend of comfort and curiosity that defines city life. Standing on the corner of Lake and Hennepin, you’re surrounded by a critical mass of strangers and occasional friends. This is truly our most urban street, alive with possibility.

This is not to suggest that Hennepin Avenue doesn’t have problems. In many places, the sidewalks are small, boring, and uncomfortably lacking in a parking buffer. Crossing Hennepin can be terrifying. The street’s myopic devotion to moving car traffic is one of the key reasons why there aren’t sidewalk cafés along the street. Instead, most of the pedestrian refuges are off along the side street, tucked away from Hennepin Avenue. 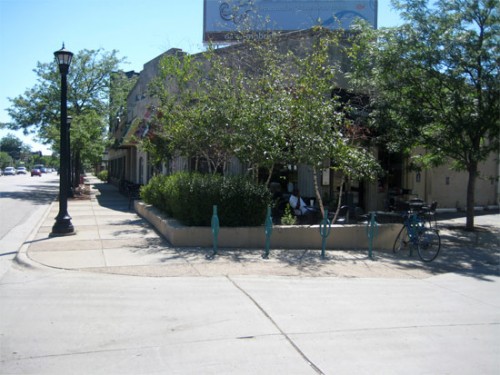 The other big problem with Hennepin is that it doesn’t serve its transportation function very well.  Driving down Hennepin is often an exercise in futility, and if you want an earful, ask any regular rider about taking the #6 bus from downtown to Uptown. Earlier this year on this very website, David asked the intriguing question: “What if we closed Hennepin to cars?” I urge any Hennepin fan to check out his idea, and to take it seriously. Perhaps Hennepin needs to go ‘all in’ on the pedestrian experience, to double its commitment to sidewalks. The status quo is only going to get worse.

Critiques aside, today is a moment of celebration. Hennepin Avenue epitomizes Minnesota’s urban life. It combines rich history with an openness to change that’s all too rare in Minneapolis and St Paul. While there’s a lot we could do to make the street even better for strolling throngs, Hennepin Avenue is well deserving of the 2012 award for Best Pedestrian Shopping Street. Congratulations Hennepin Avenue! May your future be filled with window shoppers.