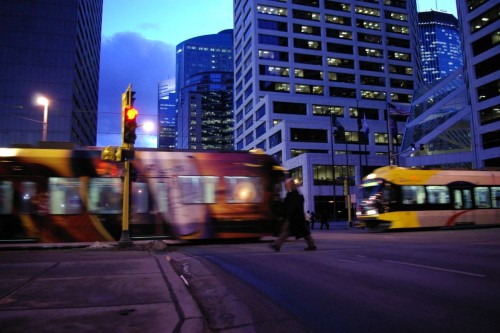 A new statewide poll conducted by Minnesota’s three largest Chambers of Commerce—Minneapolis, St. Paul, and TwinWest—shows for the second year in a row that support for expanding the transit system in the metro area is strong. Seventy-nine percent of respondents said that Minnesota “would benefit from having an expanded and improved public transit system, such as rail and buses,” while another two-thirds said they would like to use public transit but that it isn’t convenient or accessible to them.

These results are mostly unsurprising. In the abstract, people claim to want all sorts of things–tax reform, universal health care, increased access to transit–that, when confronted with the realities of accomplishing them, they turn squeamish about. What’s more surprising is that this time, confronted with the reality of what might be necessary to actually accomplish this, respondents didn’t lose their nerve.

This is big news, especially since sales taxes are perhaps the most stable and predictable revenue source at our disposal for supporting transportation investments. Revenue sources such as the Motor Vehicle Sales Tax (MVST) and Motor Vehicle Fuel Tax (MVFT) have both proven volatile and politically difficult to effectively maintain (the MVFT). Because of this, sales taxes are frequently a go-to source of revenue for cities looking to finance public transit projects. (Minneapolis dedicates 0.25% of its 7.75% sales tax to transit.)

Minneapolis currently has the 61st highest sales tax of all cities with at least 200,000 residents. (Birmingham is first, at 10%, while several other cities have no sales tax at all.) A bump of 0.5% would put Minneapolis on par with a city like Dallas, Texas, ranked 43rd on the list–higher, but still just barely in the top 50%. (Of course, anyone who has paid for a drink downtown knows that restaurant and alcohol taxes can often make that figure much higher.)

Would you support another hike in the metro area sales tax to support transit improvements and expansion? Tell us in the comments below.