After reading Prescott Morrill’s great article on the continual growth of the Minneapolis bicycling population, I was initially shocked at certain count levels in specific areas. The counts in the Bike Walk Twin Cities study were within a 2-hour time period during evening rush (4pm – 6pm), and occurred in a week timeframe in mid-September. Some places with high demand, such as the Franklin Avenue bridge, had gradually healthy & growing numbers, whereas 20th Avenue near Riverside Plaza had essentially the same amount. But, initially, I was extremely surprised to see that 15th Avenue SE north of the U of M campus had the highest bike count number, the highest non-motorized count number, and contained one of the largest percent growth values within the entire city. At first, I was surprised that these values surpassed such high profile places such as the Hennepin Avenue Bridge or the Midtown Greenway, but after thinking about it, the numbers made complete sense.

In general, the college students were back to school in mid-September, and were walking/biking to campus.

Don’t get me wrong, this doesnt take away from the data collected – in fact, it even supports the notion that the student population boom around campus has roots in Como. The SE Como neighborhood is home to the 3rd highest owner-to-rental conversion rate in the city, according to the Daily citing a City report. Whereas before the more permanent residents of Como might have driven to their places of work, the majority student population now residing in the area are within walking/biking distance to campus, especially on nice September days. Also, due to the rail yard history of splitting the geographic street grid north of Dinkytown, 15th Avenue is the only street connecting the two neighborhoods.

The resultant of all of these population forces make 15th Avenue the Twin Cities’ only non-motorized bottleneck.

Granted, both the City of Minneapolis and the University alike have made solid strides of improving the biking & pedestrian infrastructure. New modifications, such as implementing the green thermoplastic bike lanes in intersections, lowering the speed limit from 30 to 25 mph, and adding the bike & walk green signal at the University Ave intersection, have seen positive feedback thus far. However, more should be done for the avenue to truly reflect the highest non-motorized movement in Minneapolis.

So, if I had the ultimate power over the fate of 15th Avenue SE, here are some of the ideas I would put into play:

1) Take out the grassy easement on either side & expand the sidewalks & bike lanes.

Currently, between 5th Street & 8th Street, a grassy median exists which separates the bike lanes from the sidewalks. Although both of these entities are already fairly wide compared to other lanes around the area, the large pedestrian and bike volumes should be enough to expand both of them. I think the easiest way to do this without affecting the vehicle lanes would be taking out the easement on either side, expand the curb, and make the concrete sidewalk touch the bike lane.

There would probably be some outcry from the area, especially on the east side with the University Bierman Athletics facility fronting the avenue. Some may be up in arms about removing the established large trees and vintage light posts along the avenue, but trees can be replanted and light posts can be moved. Besides, if the Marcy-Holmes Small Area Plan for 15th Avenue comes to fruition, the denser development along the corridor would better suit a concrete-touching-asphalt road. 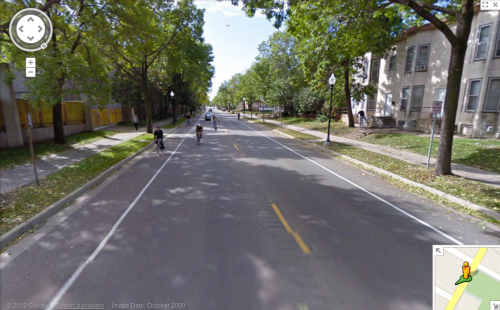 Look at all those bikers! That one in the vehicle lane wishes he had more room in the bike lane… (From Google StreetView)

This plan would allow pedestrians and bikers alike to feel more safe without affecting the vehicle traffic. Problems with rain runoff and snow piling may be tricky, especially around this time of year when the snow & ice seems to create a boundary between the road and sidewalk.

Which brings me to my next point…

2) Do something, ANYTHING, to the rail bridge north of 8th Street.

I have written about this bridge in the past, and how truly detrimental it is aesthetically as a gateway between Como and Dinkytown. Reports have shown the bridge to be in “poor“ condition, and the City can apparently do nothing about it. I don’t buy the notion that they cannot do anything at all. This bridge is not only dangerous for bikers, but also wary for walkers too, especially in the winter when the “ice palace“ happens (It happens EVERY winter, by the way). On top of that, this passageway under the bridge is dangerous for cars, too – some get stuck trying to move forward during snowstorms. Kare11 had a good story on it recently, and even though they stated that the bridge is structurally sound, walking students were quoted as stating they always try to walk under it as fast as possible. 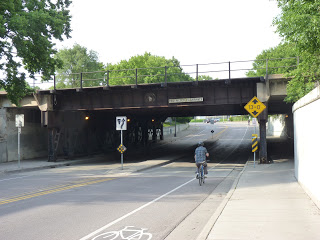 This biker is about to face his perilous doom. Godspeed!

What can be done? First of all, the metal supports which are rusting away can be at least fixed aesthetically. These beams look like they haven’t been touched since the initial construction in 1921, and could definitely use a facelift. The large holes above the bridge should be patched, and a modern drainage system should be implemented on the tracks above to move the runoff somewhere other than on the sidewalk.

As far as the bike lanes and sidewalks, the only reasonable change I could see would be removing the median in the middle and pushing the vehicle lanes close to each other. This may be dangerous in execution, as the left turn into Como is fairly steep. However, if this was implemented, the bike lanes could be expanded, and the sidewalk could have more room for comfort.

If it were my bridge, I would probably just blow it up and try again.

If there was some way to engineer the road around the railway bridge so that southbound traffic could move down 14th Avenue and northbound traffic up 15th Avenue, the bike lanes and sidewalks on 15th could easily be expanded and a cycle track-type boundary could be created. This would certainly create an easier feeling for non-motorized movements.

As far as the vehicles go, the southbound traffic could somehow shift down 8th Street for a while and make a left onto 14th Avenue. The one way would continue until University Ave, where vehicles could then turn left, move a block, and turn right onto Pleasant Ave to continue along their way. This reminds me of how Hennepin Ave & 1st Ave downtown used to be, but this case would be less vehicle-oriented with only one lane moving each way.

Another option would be construction of a road over/under the rail bridges near Rollins Ave. This would minimize the problems of going down 8th Street for a block. Here is my idea.

4) Reconstruct the Rollins-14th Pedestrian Bridge for bikes, and turn 14th into a Bike-Only Boulevard

How cool would it be to see 14th Avenue be reconstructed as one of the few, if not the only, bike and ped-only streets in the Cities? This wouldn’t be impossible, and in fact, would give bikers/peds a much more year-round enjoyable experience. 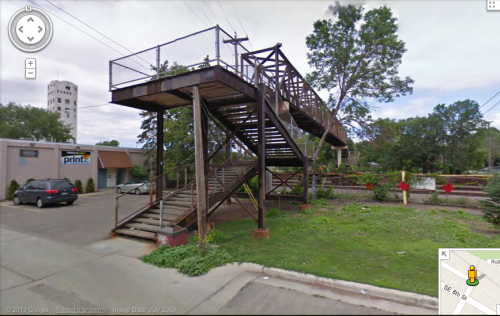 It looks like the bridge version of Jaws. Cue John Williams? Duhhh dum… (From Google StreetView)

The current pedestrian bridge over the rail line on Rollins & 14th Avenue is an old 60’s modernist-era steel-frame, a monstrosity which any dastardly pupil would avoid. This bridge could be fixed, however, by creating a ramp for bikes. Even something similar to a large volume cylinder ramp near I-35W on 5th Street would be appreciated. Then, 14th Avenue could be reconfigured to restrict all motorized traffic, and allow for a large safe street. When 14th approaches Dinkytown, it could transition into a bike boulevard, where bikes would have the right-of-way in traffic. As it enters the U of M campus, the trail could continue through the Knoll area over what was once Peik Hall, and could drop off near the roundabout area (theoretically, of course… the U would have to follow through on their Master Plan idea of demolishing Peik Hall first).

Once finished, the bikers, pedestrians, and vehicles alike would rejoice in the magnificent splitting of movements.

I am serious. This would be the slowest paved artery in the city, but would make cars move just barely faster than the speed of bikes. Vehicles wouldn’t abide the limits initially, so speed enforcers would probably have to be present in the starting phases. In the end, though, the non-motorized movements mixed with the slower moving traffic and the higher density along 15th would turn this corridor into a great urban street.

So, what are your ideas? Any other thoughts on how to improve this non-motorized bottleneck?