This post is an editorial recap of one of the Metropolitan Council bike study meetings focusing on outer ring suburbs to identify major bike routes. There are still opportunities for people to attend in their area:

I went to White Bear Lake’s quaint downtown to participate in one of many Metropolitan Council Bike Study meetings. The library meeting room was packed with 40+ people including cycling and walking advocates, bike shop owners, and suburban residents – all who want cycling to be safe for everyone.

Suburban cyclists aren’t creatures entirely different from their city-dwelling counterparts. In fact, their concerns are right in line with cyclists everywhere.

The elephant in the room: MnDOT

While no MnDOT representatives were present, you could sense that infrastructure they oversee is a huge concern to everyone who attended. Before introductions were over, several people brought up the fact that there are great bike corridors which disappear as you approach any MnDOT highway.

The intersection of University Avenue where it crosses 35W is a great urban example of magically disappearing bike lanes in MnDOT territory. A suburban example that was cited is County Road 96 which goes between Long Lake and White Bear Lake. It has a very nice, very wide bike trail for 90% of the road. But as it approaches 35E, 35W, and Highway 10, cyclists and pedestrians are forced to duke it out in the road with the automobiles. Not exactly friendly considering 96 is mostly 50MPH.

One gentleman at the meeting likened some of the MnDOT public meetings as “talking to a deaf elephant, which continues to lumber on its current path.” I like Charles Marohn’s Strong Towns view that public infrastructure meetings are often about giving residents a choice between dumb, dumber, and dumbest. If you have ever had time to attend a MnDOT meeting you may realize when you arrive that the choice has obviously already been made for you.

While we all agreed that MnDOT is a major source of systematic problems, it was not productive for the study. MetCouncil can only steer MnDOT in the right direction when MnDOT is receiving money for a project from the Metropolitan Council, which is rare. Many people don’t realize that there are only about eleven (11) people in any given city that can influence MnDOT while they’re wielding their power in your area. They are your city council, and the mayor.

We needed to get back on track and find an idea with legs.

Suburban Hell: How do I get out of here?

One idea from the brainstorming session that seemed to resonate was the issue of sign-age. Out in suburbia, where no street seems to be straight for more than a half mile, navigating can be utterly confusing.

Individual cities may have designated bike routes. If there is any sign-age it’s usually the ubiquitous and ambiguous “Bike Route” sign:

While the specific actions that the Metropolitan Council would take after completing their study were unclear, it was clear they were interested in identifying routes, destinations, and all pleasure and pain points in between.

The idea of sign-age seemed like one of those things that MetCouncil could help coordinate between municipalities. Minneapolis was cited as a good example of useful named bike route & trail signs. If this extended out into surrounding cities, it would make navigation much easier. 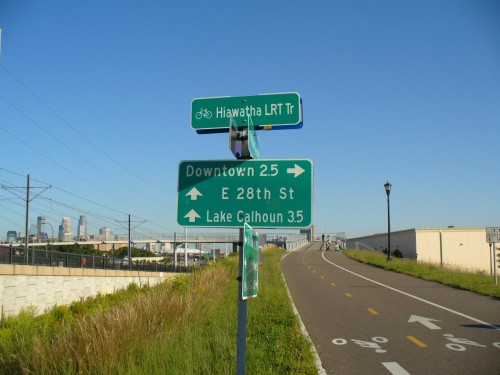 Clearly marked routes may encourage more cycling which will in-turn acclimate drivers to seeing cyclists on these routes. More use means more safety for cyclists, and a greater chance that in the next road construction life-cycle, the route will be given additional bicycle and pedestrian treatment.