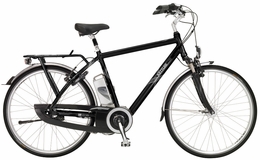 The popularity of e-bikes has grown considerably over the past few years. The power to weight ratio of battery and motor technology has improved immensely, while the size has shrunk. With many newer e-bikes, such as at left, it’s difficult to even tell that they’re an e-bike thanks to thin batteries that add only about an inch to the rear rack and motors hidden in wheel hubs.

E-bikes can provide terrific benefits to people who want to ride but may need a bit of extra assistance. The beneficiaries who often come to mind first are older folk who can often do pretty well on their own, but may need some help getting up a hill or for the last half-mile on their way home from their morning coffee. I expect to be a part of this group one day, far off in my future. 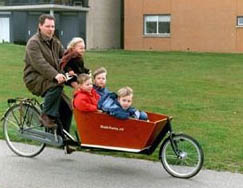 E-bikes have become popular with moms and dads who ferry their children around, particularly those with a bakfiets full of kids (and groceries). I know of two people who are physically disabled, one permanently, the other having to be extremely careful for 6 months, who wouldn’t be able to ride a bike without the assistance provided by an e-bike. Delivery folk in Europe who handle heavier loads have also taken to e-bikes.

I can pedal 220 lbs of potting soil and fertilizer in my bakfiets up the hills near my house today, but some day I expect I’ll convert my bakfiets to an e-bakfiets so that I can continue riding it for these errands.

Perhaps the latest folk to latch on to the benefits of e-bikes are people commuting a fair distance to work with a few hills or windy stretches along the way. The assistance allows them to avoid sweating while still getting a bit of exercise and enjoying riding instead of being a part of the morning traffic jam. 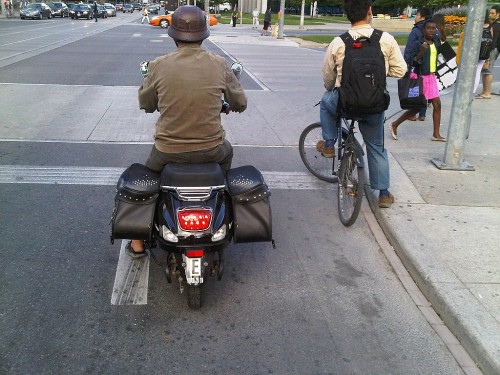 A ‘legal in the U.S. (and Canada)’ e-bike using a bike lane to avoid traffic (photo: bikerjulio)

The all-electric Zero S can beat most 650cc motorcycles off a start line and has a top speed of 95 mph. Awesomely fun to ride, but probably not a good thing to have flying down the local bicycle path.

At what point is an e-bike more of a motor vehicle than a bicycle and why does it matter?

There are a number of benefits to being classified as a bicycle. Bicycles can travel on cycleways such as along a bicycle path, don’t require a drivers license, and they don’t need to be registered or have insurance.

To take advantage of these benefits, many manufacturers have put semi-functional removable pedals on their electric scooters, like the one in the photo above, so that they meet the minimum U.S. requirements of having pedals and a maximum output of 1000 watts.

This would be fine if it were not for the problems this causes. These scooters can travel at 30 to 40 mph, without pedaling. When two people riding bicycles crash there will be apologies and maybe some scratches, when someone gets hit by one of these scooters there will likely be more than scratches.

People zipping along paths at considerably higher speeds also make the paths quite uncomfortable for bicyclists and pedestrians and people who are truly pedaling, propelling themselves along, seem to have considerable more concern and consideration for other users than those who don’t have to pedal at all.

There’s a reason that pedestrians and bicyclists want segregation from motor vehicles—it’s safer, feels safer, and is more comfortable.

This all kind of gets to the heart of things. Where do we draw the line?

In most of the U.S., including in Minnesota, an e-bike may put out up to 1000 watts, must have pedals of some sort, and is limited to 20 mph.

For comparison, consider that an average person riding a bicycle utilizes about 65 watts to cruise at 13 mph along a flat path. Add in some hills and a few stop/starts at intersections and this 13 mph average may require around 80 watts average and maybe 175 watts peak going up a hill. Even climbing a hill with fairly heavy cargo, most people will never put out more than about 250 watts and that will only be for a couple of minutes. 250 watts is considerable effort for 99% of us.

(On the upper end of performance, riding a bike around the Twin Cities for an hour, up and down hills, at an average speed of 20 mph requires about 190 watts average with a peak of perhaps 400 watts climbing up hills at a quick pace. Only about 1% of the fittest in our population can do this though. And then there’s the 1% of the 1%—professional bicycle racers in the Tour De France or Amgen Tour Of California can put out 400 watts and average close to 30 mph for four or five hours.)

Even considering the extra 10 pounds of battery and motor, there’s considerable difference in a person who can maintain about 100w of output and an e-bike at 10 times as much power.

A pedalec in Europe is limited to 250 watts, may only provide assistance to pedaling, and assistance must taper to zero by 15 mph with no assistance above 15 mph. Pedelecs don’t have a motorcycle style throttle control like many e-bikes, but provide ‘boost’ to your pedaling. Some describe it as “like having a strong wind at your back, only better.” Most also have three or four settings so you can use high boost riding to work in the morning and switch to low on your way home for more of a workout.

Overall this has seemed to work fairly well. People riding pedelecs are somewhat closer to on-par with others along European cycleways. While these 250 watt pedelecs are still a little faster than non-powered bicycles, particularly up hills, the riders seem more considerate of others than those on more powerful e-bikes that don’t require pedaling and so these pedelecs generally mix in fairly well with other bicycles and are not considered a significant danger or nuisance.

There have been discussions about lowering the maximum power to 150 or 200 watts, better defining ‘taper’, or even adding inclinometers to e-bikes that would allow different power curves going up hills. The most popular seems to be one that would allow the full 250 watts up to about 10 mph and then a linear taper to zero at 15 mph.

Our current allowance of 1000 watts in the U.S. could bite us in a few years. The more e-bikes that are sold (159,000 were sold in the U.S. over the past 12 months, 200,000 are estimated for the next year), the more difficult it will be to change the limit and do so without grandfathering hundreds of thousands of what are effectively quite fast scooters.

I think the best bet for the U.S. would be to either mimic what Europe currently has or mimic Europe with a bit more restriction such as perhaps 150 or 200 watts maximum or be more specific with what ‘taper’ should be. Even with the tighter restrictions these pedelecs will provide considerable benefit to their owners.

E-bikes provide a way for many people to ride a bike who otherwise might not be able to and they allow others of us to ride more often. The benefits of e-bikes are numerous. We just need to make sure that we don’t destroy our bicycle and pedestrian paths in the process.

2 thoughts on “Getting A Handle On E-Bikes”