(This the second in a three part series discussing paint;  the first post is here).

City officials make transportation planning decisions under financial duress and scant information. Will rezoning land uses in the neighborhood encourage walking? Will the new bus line decrease car use? Should the city build a protected bike path in the middle of the city? Answers to these questions come slowly as changes in cities take time to mature. People’s travel habits evolve even slower. It is difficult to know what “works” in the transportation business.

The bench chemist runs experiments with tubes in the laboratory. The engineer performs simulation tests with emerging equipment. Psychologists employ rats as surrogate humans. Doctors bring in human subjects with varying conditions to prod and poke at. Results from each of these experiments guide future actions. Transport planners are social scientists whose work does not conform well to controlled experiments. Learning how people respond to new neighborhoods or different street designs by ‘moving’ them (and their travel) is cost-prohibitive. Relying on surveys or simulations are critiqued on several grounds. Borrowing pages from the “playbook” of a peer city is less than satisfying. “Success” is context dependent and hard to forecast. 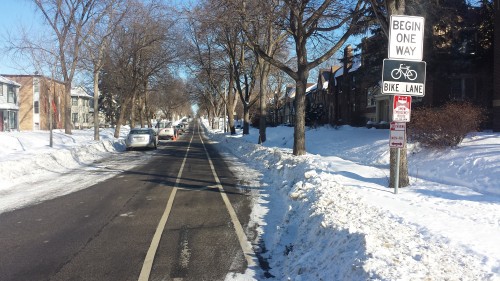 Photo courtesy of Cindy Christian, who lost two fingers while taking the photo on this wonderfully cold winter day

This context is where paint shines; it is an effective strategy for experimentation. Three aspects highlight the advantageous nature of paint: it is experimental, temporary, and has low cost.

Experimental—Cities change and so does the nature of roads. I have previously written about how space in the right-of-ways might be changing. Corridors that were formerly reserved solely for cars are giving way to broader modal uses. But the composition of that road profile will always be questioned (e.g., two vehicular travel lanes with a bi-directional bike lane; three vehicular travel lanes with a one-directional bike lane?).

Paint allows a city to experiment in a low risk environment with potentially high returns[1]. A guerrilla painting activity spurred by neighborhood residents on Broad Street in Memphis catapulted what will become a $4.5 million on- and off-street bicycle project[2]. More preferred approaches by local officials are probably the city-sanctioned variety[3]. Test corridors can be identified. Cities can try new bike routes on neighborhood streets. Meager bike routes can be made more formidable via painted buffers. Evaluation programs would follow. In an era of evidence based proposals backed by data driven results, paint allows unparalleled flexibility, “The proof is not in a computer model,” so says Janette Sadik-Khan, “it is in the real-world performance of the street.[4]” Thus, as cities explore scenarios of how to respond to pressures for changing the nature of their streets, paint—both the staid white latex line accompanied with colored highlights—provides a nimble strategy. Seattle specifically uses paint on interim facilities that may change based on operation evaluation and community feedback.

Temporary—The life of a street is eternal; paint requires annual reapplication. Traditional latex applications wear quickly: sun fades it; winter salt eats it; snowplows tear it. ‘Haggard’ best describes the current look of the 2012 reapplication on Bryant Avenue[5]. But the ease by which paint turns haggard is its asset. If evaluation programs points to unintended effects, an experimental bike lane can easily be removed. To originally lay the green carpet on Bryant Avenue Public works, crews clocked almost 11 nights. Just a few hours work can remove it, if that is what is deemed necessary, therefore highlighting the benefit of using paint over traditional construction methods[6].

Although, the temporary nature of paint needs to be balanced with a need to keep the public’s interest and maintain their faith. Durability, slip resistance, and long lasting visibility present key challenges. The Dutch know the most durable way to color pavement: they embed their redish color with the mixing of the asphalt. This limits flexibility over time. In this quickly changing landscape—particularly in the U.S.—it makes more sense to be more nimble. (see below).

Low cost—Most initial colored painting applications in the U.S. used versions of latex whose raw costs hover around $1 per square foot[7],[8]. Aiming to achieve more life from their efforts, cities are still using latex paint for white lane lines but are shifting to more durable materials such as thermoplastic and methyl methacrylate (MMA)[9]. It might be five to ten times more expensive than latex paint, but it has an expected lifespan of five to seven years. Either way, the costs are pale compared to traditional construction methods.

Realizing these three advantages of paint, the third post in the series will discuss specific guidelines for where and how to apply colored paint most effectively.

[1] More on using paint as low cost experiments in the streets, see: http://www.ted.com/talks/janette_sadik_khan_new_york_s_streets_not_so_mean_any_more.html

[2] Thanks much to Martha Roskowski for pointing the Memphis project:  http://www.peopleforbikes.org/blog/entry/memphis-is-about-to-build-the-countrys-first-crowdfunded-bike-lane

[3] Writes Sarah Goodyear at: http://www.theatlanticcities.com/commute/2013/09/will-guerrilla-bike-lane-lead-real-thing/7019/ ; “The success of guerrilla bike lanes and similar tactics depends a lot on local culture. In some places it will get you arrested. In others, it will get you pylons and crosswalks.”

[7] For a complete rundown on more technical specs of paint and the cost estimates between 50 cents and $1.50 per square foot, see: http://www.peopleforbikes.org/blog/entry/tech-talk-new-innovations-may-make-it-dirt-cheap-to-color-streets

[9] Generally, performed thermo is used on asphalt surfaces and MMA is used on concrete.

3 thoughts on “Why Paint Shines (Colored and White)”