66th Street is Richfield’s main street, and with a planned reconstruction of 3.5 miles in 2016-17, it has the power to transform this first-ring city. It also has an enormous influence on adjacent South Minneapolis: 66th Street is the longest east-west street south of Lake Street, as well as home to the only major bus line south of Lake. (That bus line also happens to be the only Hi Frequency bus line that does not enter Minneapolis or St. Paul.) Although these transportation aspects are important, the most important aspect in terms of Richfield’s future success is not a question of how many cars, bikes, or buses move on 66th Street. Rather, the most important aspect is something that’s been overlooked in the street planning process so far: the quality of the frontage along it.

Before I go any further, I will note that you have a major opportunity to help create a vital, urban 66th Street by attending the upcoming open house, which will help determine bicycle facilities for the new roadway:

Although Richfield is laid out on a prewar grid, the majority of its development came after 1950. Remarkably, some areas haven’t changed since. Behold, 66th and Nicollet, home to the Hub: 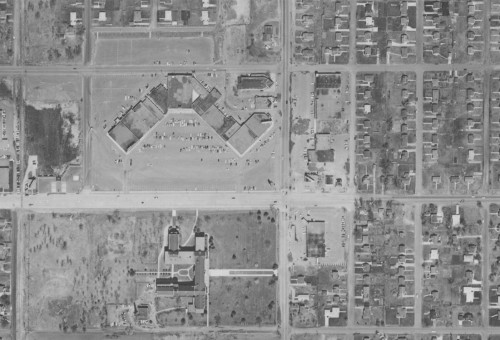 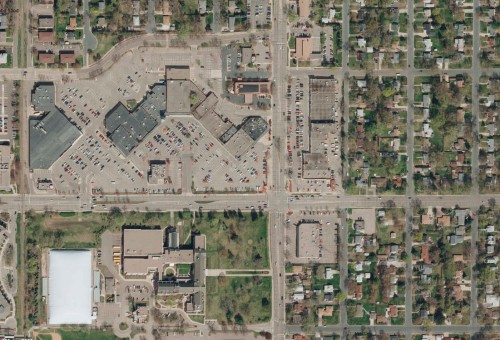 66th and Nicollet in 2013. Image from Hennepin County

The roadway has changed slightly, but you’ll notice the basic function of it has not changed. New turn lanes were added, and some additional trees were planted, but the basic function to move users (mostly cars) from A to B remains. Large parking lots flank all three corners (and may soon cover the fourth). Despite being a major transit node, no development at the intersection actively appeals to transit users.

Although 66th and Nicollet remains stagnant, other portions of 66th have seen redevelopment of varying quality. One of the better redevelopments is Woodlake Center and the adjacent Oaks on Pleasant apartments, which have townhome-style frontage on 66th: 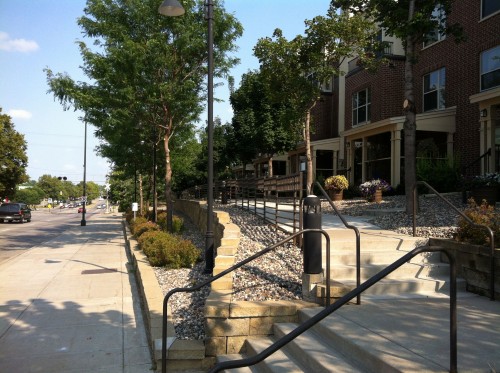 The Oaks on Pleasant apartments

It’s unclear how useful these entrances are to residents, as most appear to access the units from structured parking behind the buildings. While it’s pleasantly built, the public-facing spaces appear underutilized.

One of the largest redevelopment projects along 66th is Cedar Point Commons, home to Target and Home Depot. This complex is also one of the worst in terms of frontage. This small, far-eastern portion of 66th was reconstructed more recently, and is much more attractive than older portions. It includes boulevard trees, pedestrian-scale lighting, wider sidewalks, and landscaped medians. If you don’t think very hard about it, it’s a pleasant street. 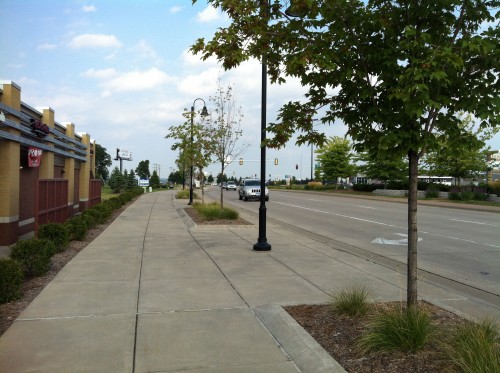 Unfortunately, if you do think hard about it — or turn your head slightly to the left — you see the problem: the frontage is made up of fire exit doors and gas meters. 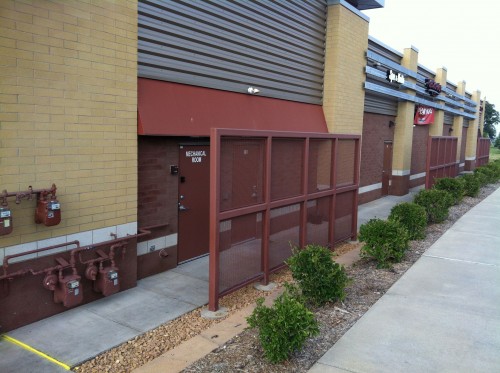 Why would a business do this — place its most unpleasant features on permanent display to the public realm? For a simple reason: from the developer’s perspective, customers come from the parking lot. When the street exists only to move people (cars) from A to B, minimal cost and effort should be expended on creating appealing frontage or entrances from that street. The developer made a rational choice, and the city planning code failed to prevent the negative consequences of that choice.

So what is one to do, when the rational choice — to favor cars — comes at the expense of pedestrians, cyclists, and transit users? The long-term answer is to increase the popularity of other modes, by building high-quality bikeways and improving transit along the corridor. But there is an important step to help achieve that long-term goal: align the interests of motorists with those of other street users. Or, put more simply, install on-street parking.

Thus far, on-street parking has been treated like a difficult burden on the 66th Street project. Small areas are being considered for it, but engineers have focused on the ways in which it complicates accesses (driveways) and requires more land acquisition. The influence on future redevelopment has been largely ignored, at least as presented to the public.

In other projects, on-street parking is often touted for other urban benefits, including calming traffic and providing a pedestrian buffer from moving cars. But perhaps the most important benefit is that it promotes meaningful frontage. This can be clearly seen on Excelsior Boulevard in St. Louis Park, a similar county road with development of a similar age as Cedar Point Commons. For the businesses — including “small-box” chain Trader Joe’s — the most convenient location to park a car is also the best entrance for pedestrians, cyclists, and transit users. 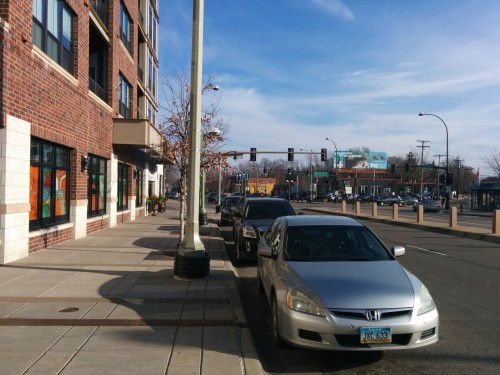 This serves as an immediate benefit to motorists, and it also makes walking and biking more viable, by providing more destinations that are bike/walk-friendly. In the long term, it also helps us reduce our need for low-value off-street parking.

Excelsior Boulevard has an attractive streetscape. But the decorative lighting and patterned concrete are insignificant compared to the roadway feature of on-street parking. This parking has helped to bring the most important street feature of all: meaningful frontage, and destinations that serve all users well. We must strive for the same result in planning for a new 66th Street.