This blog needed a bit more solipsism, so let me use my inaugural post to talk a little bit about me. But I promise some Minnesota transportation and land use talk too.

Unlike some of the impressive people who write for streets.mn, I have no particular expertise in transportation, land use, urban planning, zoning and the like. If I know anything about vibrant streets and cities, it’s from using them. I live and work downtown, which affords me the luxury of commuting on foot (often through the dreaded skyways, but that’s a topic for another day).

Even when I’m not commuting, I walk a lot. One of the more pleasant side effects of reading this blog has been giving me reason to go walk through the parts of town that are being discussed. I’ve walked West Broadway to see what is being proposed to be torn down next, I’ve walked the Cedar Lake Trail and the Dan Patch line to see what freight re-routing was going to do to St. Louis Park, and, of course, I’ve wandered Colfax and The Wedge. Maybe some of those walks will be the subject of future posts.

But even when I’m not walking as research on local development controversies, I wander to explore and learn more about the city. Sometimes that means peering out my bedroom window and wondering what I’m looking at in the distance. One time it turned out just to be a scaffolding-covered apartment building and not, as I had perhaps thought, a decaying industrial or agribusiness structure popping up out of Near North that might have proved interesting.

This past weekend I rambled by car farther north still in an effort to finally identify that kind of fortress-looking thing I can barely make out in the distance. After a pleasant Sunday afternoon drive around Nordeast and Columbia Heights, I decided maybe it’s the Columbia Heights Filtration Plant complex (which looks interesting enough to be a topic for another day), I started meandering south to my dinner plans in Richfield. Not being in a hurry and not being a fan of traveling by freeway, I set out to try to find a path that didn’t involving leaving surface streets and was reminded, that’s kind of hard to do. 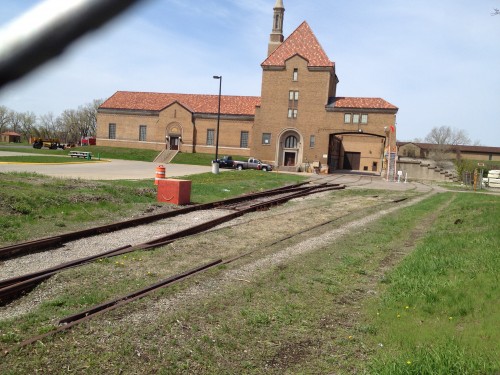 A small part of the large Columbia Heights Filtration Plant

Okay, so maybe it doesn’t make a lot of sense that I started out by going west, but I wanted to drive over the new Lowry Avenue Bridge and I get a little confused when I’m over that way, thinking that the river should be running closer to east-west than its actual north-south. Nonetheless, I sent myself far enough west to face the dreaded Great Divide. 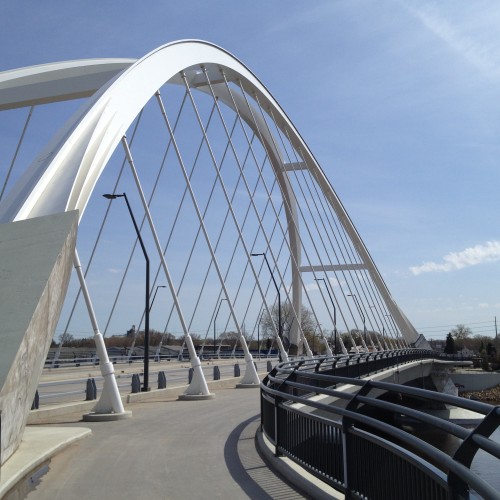 What’s the Great Divide, you ask? Well, it’s a thing I just made up a name for, that’s what it is. Have you ever noticed how few places there are to cross the rail corridor that houses the Cedar Lake Trail? There are just two streets that cross the Great Divide between Lyndale and Highway 100 and one of them is the relatively recently added Van White Memorial Bridge. That has to be just an unfortunate accident of history, right? I mean, no one could possibly have wanted to cut off the bucolic lakes and neighborhoods of the southwest part of our city from the folks living farther north, could they? 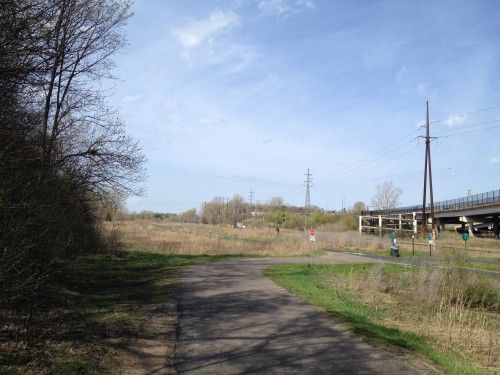 The Great Divide from the Kenwood Trail entrance. Does this look like a great place for a train station?

The rail line itself has to predate the development of the two parts of the city that it divides, but I can’t help but notice how Interstate 394 parallels and reinforces the Great Divide. I can’t help but wonder if that was a feature rather than a bug.

I suspect that when I was asked to write for streets.mn, they thought readers might enjoy some of the nearly nonsensical ramblings and links to local history you can find on my recreational blog, creatively titled Ghost Signs of Minneapolis. Alas, they made the mistake of giving me the keys, so until  MY GOOD FRIENDS AT STREETS.MN figure out that it needs to undo that error, I’ll probably ramble nearly nonsensically about topics like this too. 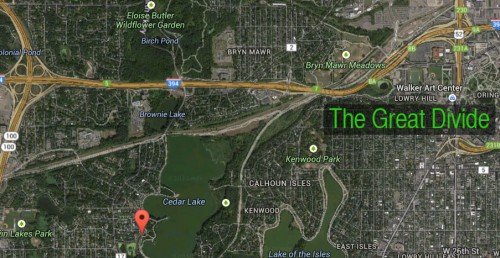 6 thoughts on “The Great Divide”