(The following is from an email sent to Saint Paul Smart Trips and my City Council Representatives. I was asked to post it here.)

This is the lead photo from the email sent out by St. Paul Smart Trips encouraging me to support streetcars in St. Paul by attending a public meeting.

I was not able to attend the streetcar meeting but I am glad to hear that the ​proposal to study the streetcar concept got approval to move forward.

I am not against streetcars. All​ of my career I commuted by bike in the summer and Metro Transit bus in the winter. A streetcar would be much preferred to a bus. The above photo inspired me to search out​ more​ information on how streetcars and bicycles interact in other cities. In​ looking at the photos and​ links below it becomes clear that it takes really good design ​(​and probably a lot of money)​ to integrate streetcars successfully into the existing infrastructure while providing safe travel for all. ​Also, it appears that most cities forge ahead, build the streetcar, and deal with the issues later. I am definitely against that approach.​

I read through the streetcar posts on the Open Saint Paul forum and found that no one was mentioning bicycles so I thought I should comment.

This is what I found in looking around the net…

Tucson is starting streetcar service this July and even before carrying the first passenger there are lots of bicycle/streetcar problems. 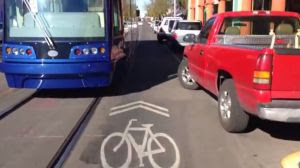 This is one situation – very tight  quarters for bikes​.
http://www.insidetucsonbusiness.com/news/tucson-trying-to-allay-fears-about-streetcar/article_fbce72fc-b5da-11e3-b66d-001a4bcf887a.html

And this scenario could force the biker to cross the tracks at a dangerous angle causing tires to catch the rails and result in a fall.

Like this.
http://www.commutebybike.com/2014/05/30/bikes-and-streetcars-in-tucson-is-there-a-way-to-make-it-work/
There has been enough controversy in Tucson to generate this TV News story on streetcar “pinch points.“
http://www.kvoa.com/news/cycling-advocates-push-for-streetcar-pinch-points-fixes/

And Tucson isn’t the only city having problems.

This approach has been tried in Washington DC – to me it doesn’t look safe for either bikes or peds.
http://greatergreaterwashington.org/post/16675/there-are-many-strategies-for-mixing-bikes-streetcars/

Here’s another​ TV news story, this time from Toronto, subtitled “A new study says an inordinate number of bicycle accidents in Toronto are caused by streetcar tracks.”
http://www.cbc.ca/player/News/ID/2297244734/

And then there’s this video “Bicycle Crashes Caused by Streetcars” which starts out with a short PSA but goes on to document problems in multiple cities.
https://www.youtube.com/watch?v=jjK7Xkedqcs
​Taking this info and applying it to the situation in St Paul a couple of issues stand out:
– On the favored streetcar route, both East 7th and West 7th are key routes into Downtown and neither has any decent parallel alternative routes that allow for efficient point-to-point cycling. ​ Bikes would have to mix with streetcars.​
– All of the proposed St Paul streetcar routes have one thing in common – they all pass through the same traffic bottlenecks that bicycles must navigate now to get into Downtown. These choke points are the biggest deterrent to safe bicycle commuting in St Paul and having tracks and streetcars will only make matters worse.
​So…​ if streetcars are to be implemented in Saint Paul, let’s learn from experiences in other cities and do ​proper​ design and construction to ensure that we build a system that is safe and convenient for all road users. We should even take this as an opportunity to engineer ways to eliminate our multi-modal bottlenecks as much as possible and make streetcar projects a win-win situation.

15 thoughts on “Where do Bicyclists Fit in this Picture?”