I once had a quite lengthy conversation with a traffic engineer—about seven seconds. We were discussing if an intersection should include no-turn-on-red to increase safety for bicycle riders and pedestrians using an adjacent MUP. The engineer’s concern was that this would delay drivers by an average of seven seconds each.

This was fascinating, as it seems that I am routinely delayed for much more time than this for no real reason at all—at empty intersections. For the next several days I used a stopwatch to figure out how much time I was needlessly delayed by traffic lights each day.

The number: 17 minutes per day on average.

I was, I think, somewhat conservative. I would start the watch after I’d come to a stop and there had been no conflicting traffic for at least a few seconds. In other words, when I could have safely proceeded were this a roundabout[1].

The worst was nearly two minutes I sat at one red light without a single other car in sight the entire time.

Note: I am not a traffic engineer so am venturing well outside of any area of expertise. The following is based largely on my observations of road and junction designs from a gob of driving in numerous countries. In short, I may be all wet.

32 seconds waiting at this light with zero cross traffic (and the others got there before me). 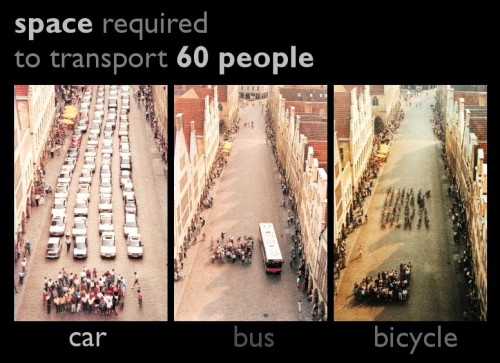 The focus on efficiency is fascinating given that cars are the least efficient mode of transportation that exists. Per person cars require more space, more asphalt, more fuel, and produce more pollution than any other mode. Cars are also likely the most expensive mode. I’d guess that it is perhaps cars inefficiency that creates the need to focus so much on making their use as efficient as possible.
That said, I am quite thankful for my inefficient car when it’s 10f below outside.

Traffic engineers in the U.S. center much of their world around LOS or Level-Of-Service—how many motor vehicles can they get from point A to point B with as little delay as possible. Generally, anything that reduces LOS is bad.

LOS is quite focused. It doesn’t account for noise or how many people are killed by it. Traditionally there seems to have been little or no consideration of LOS for pedestrians, bicycle riders, disabled, or people in nearby shops, houses, or yards[2].

This might partially explain our traffic engineers’ reluctance to do something that might delay traffic a few seconds (along with their contention that drivers in the U.S. don’t obey no-turn-on-red signs very well anyway). 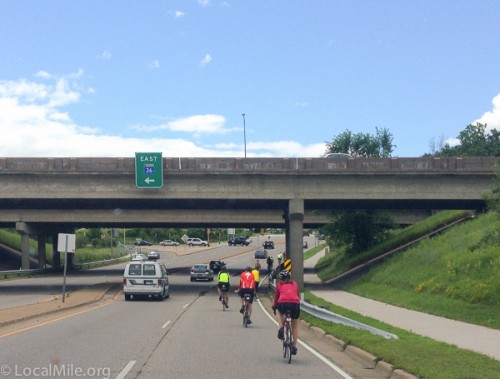 This may jive with the average U.S. driver who may well get more frustrated waiting a few seconds to make a right turn on red than waiting much longer to go straight on red through an empty intersection. This is perhaps not dissimilar to drivers seeming to have more angst being delayed 15 seconds by being behind slower bicycle riders than being delayed 50 seconds at the next traffic light.

LOS does though appear to sometimes be subservient to efficiency. I say this only because of the seemingly very long cycle times programmed in to our traffic signals. More on this below.

And this all seems encapsulated in TTWWADI—That’s The Way We’ve Always Done It. Not in itself bad given that mistakes in trials and experiments can cost lives. However, given how much more dangerous the way we’ve done it is compared to the rest of the developed world perhaps it’s time to toss the way we’ve always done it. Fortunately, the younger generation of traffic engineers (and a few others) seem inclined to do this.

Here are some ways that we haven’t always done it (but perhaps should):

We have, seemingly anyway, a gob more stop signs and traffic lights than elsewhere. I’d guess that that for every mile, I encounter five to ten times as many here as in Europe where junctions are dominated instead by roundabouts and sharks teeth (yield). 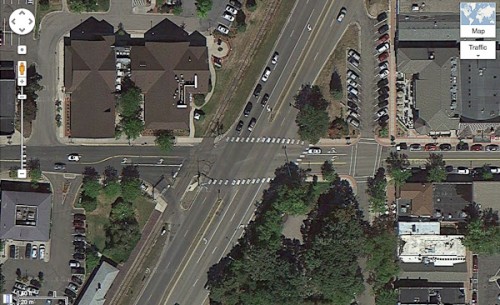 An intersection such as this in downtown White Bear Lake could easily be replaced with a two-lane roundabout and all turn lanes eliminated. In Europe this might very well be a single lane roundabout with hi-way 61 (4 lanes, north-south) reduced to two lanes. Both options would free up right-of-way for bicycle paths, sidewalks, and plantings, make crossings much safer (2 or 4 lanes instead of 7, a single conflict point), and reduce delay for drivers. This would also eliminate the current east-west division of downtown White Bear.

Roundabouts are generally more efficient than signalized or stop sign controlled junctions and are considerably safer[3]. They are self-regulating in allowing traffic to go as soon as possible instead of only when some traffic engineer made a guess several years previous.

My 17 minute measurement was really a measurement of how much time I likely would have saved had each of my traffic lights been a roundabout instead.

Roundabouts have numerous other benefits. The number of driving lanes can often be reduced since roundabouts require less queuing space for cars waiting on a green light. Turn lanes are nearly always eliminated. Roundabouts require no electricity to operate, they continue to function when power is out, have no controllers to become obsolete, and require no effort to program, re-program, and re-program again. They are aesthetically more appealing, especially if they include plantings in the middle and they result in less pollution than cars stopping at signs or lights.

My very rough guess is that over half of our traffic light controlled intersections and maybe three-quarters of stop signed intersections could and should be replaced by roundabouts.

We seem to have really long traffic light cycles (the time it takes to go through green, yellow, and red for all directions). If you miss a green you’ll likely wait a considerable time before that green comes around again even if there is zero conflicting traffic.

From a traffic engineers standpoint these longer light cycles are more efficient because each cycle has some inefficiencies built in such as red clearance interval which can ‘waste’ about 2 to 18 seconds per cycle[4]. Very simply, while 80 short cycles per hour might ‘waste’ 800 seconds to clearance time, 40 longer cycles only waste 400 seconds.

Efficiency is a funny thing though. Those ‘wasted’ seconds are only wasted if they are actually delaying people. More, they are offset by other issues such as how much people are delayed simply waiting on a cycle to complete when no conflicting cars are present and increased danger of people trying to make a ‘pink’ light to avoid the extra long wait.

In The Goal, Eli Goldratt addresses two topics important to us here; that efficiency itself and particularly by itself is not always good and his Theory of Constraints that looks at addressing bottlenecks in a system of bottlenecks.

Shorter cycle times may be less efficient mathematically, but in the larger scheme of our real world may be very beneficial in reducing time wasted at empty or near empty junctions and this might reduce our ‘need’ to speed up to make a yellow/pink/red light (which may reduce the need for longer red clearance intervals).

How often have you approached a stop sign, could see that there were no other vehicles (motor, bicycle, or Flintstone) anywhere in sight, and wondered why you had to stop? 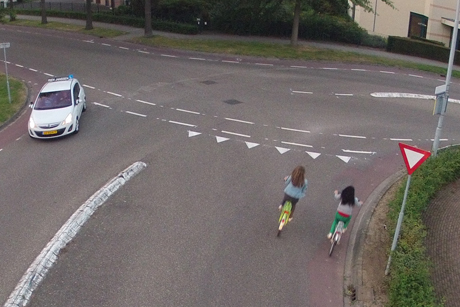 No need to stop if not necessary (Photo van Jan Duffhues) .

There are two problems with this very routine scenario; it’s a waste of time and energy, and it encourages law breaking (because rational people usually don’t stop and once you break one law, the next is much easier).

Also, a roundabout is simply a high efficiency four-way (or multi-way) yield. If traffic is such that giving a yield to one direction makes it difficult for that direction to get through the traffic that has right-of-way then a roundabout or mini-roundabout is likely a good solution.

The result of these changes could be a road system that is safer, less frustrating, and gives us back our 17 minutes.

[1] In many of these incidences I would not have had to stop at all were these roundabouts.

[2] You need only read discussions of pros and cons of various measures such as for Exclusive Pedestrian Phases to see just how much everything is focused on no harm to motor traffic regardless of anything else.

[3] There is a significant difference in the design and operation of a roundabout and that of a traffic circle. These two should not be confused.

[4] Red clearance interval is a period of time during which all lights are red to give cars in an intersection time to clear before others are allowed to go. Clearance intervals are primarily used each time there is a change in direction such as from east-west to north-south but may be included for other changes.