As 2014 closes, I thought I would compile a list of some notable highway projects of the year. These are simply ones that caught my fancy, and since most of us know about the local projects, are mainly outstate or nationwide.

Not really outstate, but included since no list of major highway projects can exclude a project of this magnitude.  The pictures speak for themselves. At the start of the year the piers were only built to just above the water, now all of them are built to the full height, and many have work starting on crosspieces (limited work on the piers will continue through winter). The new WI-35 overpass was completely built, and some grading in Wisconsin was done. Most of the Minnesota approach work was done except for the eastern part  which was delayed when they decided to build an on-site casting yard, and some of the final paving which was postponed until next year do to the early onset of winter. Casting for the main sections is done inside a climate controlled facility on Gray Cloud Island and will also continue.

Opposite view from Wisconsin, this shows all of the piers.

A cheaply built 1960s-era bridge that’s not aging well, the Dresbach Bridge, carrying I-90 over the Mississippi at La Crescent, is being replaced with another four lane bridge. Although the bridge itself is adequate for existing and future traffic, the lack of shoulders makes emergency responses to incidents problematic and “what were they thinking” ramp designs cause congestion on the Minnesota side.  Originally rehabilitation was looked at, but it was found that for only 10% more than the least costly option to eliminate the fracture critical status, they could start from scratch and have a new bridge with a 100 year design life.

Bicycle and pedestrian accommodations were looked at, and decided against. Although there’s a strong desire to connect the Blufflands Trail system (now mainly the Root River Trail) with the large interconnected network in Wisconsin (including the famous Elroy-Sparta Trail), that is proposed to be done through downtown La Crosse. A trail on the Dresbach bridge would connect Minnesota with French Island, but wouldn’t go any further until the west channel bridges are rebuilt, which is decades away. At that point the new Dresbach bridge could support a trail suspended under the deck.

Deck sections for the new eastbound bridge are going in, while work on the westbound piers is ongoing. The old westbound lanes were closed this summer as a staging area, but with work ceasing for the winter they have now been reopened to traffic.

The trees are mostly in the way, but you can see a bit of the bridge just above them.

As part of the Chapter 152 bridge program passed in the wake of the I-35W disaster, which mandates rehabilitation or replacement of all fracture critical bridges, the Winona Bridge will be rehabilitated and repaired.  For some reason it was OK to destroy the Hastings High Bridge, but the Winona Bridge, only 8 years older, must be preserved. So a new modern two lane bridge will be built next to it, then the old bridge will be rehabilitated while the new bridge carries traffic, before the final two lane in each direction configuration.

Here I’m in rare disagreement with highway expansions, I think they should have turned the historic bridge over to bicycles, and not added more highway lanes until when and if traffic justifies it (predictions are four lanes will be needed at the very end of the 30 year planning horizon). That way they’d get a  second structure decades newer, they could build it at a different locations so Wisconsin traffic heading to the big box stores along US 61 could bypass the downtown area, and with no motorized traffic the old bridge would last longer.

At any rate, so far contruction has been limited to foundations for the bridge piers.

There is actually a gap in I-95 between Philadelphia and New York. The original plan was for I-95 to follow a new alignment to the west of Trenton and the New Jersey Turnpike, but the “Somerset Freeway” was finally officially canceled in the 1980s. This project builds a high-powered interchange where I-95 meets the Pennsylvania Turnpike, routes I-95 onto it from there and onto the New Jersey Turnpike. As part of the project, the existing 4-lane Delaware River Bridge will be twinned  and electronic tolling only (sorry, rental car customers).

A textbook example of a type of freeway hated by many, the six lane Alaskan Way viaduct in Seattle separated downtown from the waterfront. Besides being ugly, even to me, it was vulnerable to collapse in the event of an earthquake, and in fact sustained damage during the last one. The original options were to tear it down without replacement, a new viaduct, or a six lane cut-and-cover tunnel. After much bickering due to ideology and costs, the final result was a four-lane bored tunnel financed by tolls for through traffic, combined with a surface street for traffic heading to and from downtown.

A year ago December the tunnel boring machine overheated and broke. Crews have been digging a vertical pit to access and repair it, but they hit archeological artifacts in doing so and were thus further delayed.  Current plan is to get it repaired by late spring.

There’s a project that’s been proposed since the 1950s to build a four lane highway through a scenic valley, a project that opponents allege will cause environmental damage and is wasteful and perpetuates a car-friendly society, while supports point out it will bring relief to a traffic-choked town. It’s been stopped numerous times by lawsuits and lack of funding, and has become a national cause celebre  in the battle of ideologies.

No, it’s not the Stillwater Bridge, it’s the Willits bypass in California. It will eliminate the last stoplight on the Redwood Highway between San Francisco and Eureka.  Even though concrete is going down on the bridges, and most of the grading is done, opponents will not give up. This year opponents managed to get it shut down for two weeks on the basis some fill soil being bought in was contaminated, enough ultimately delay completion by a year. I include it in the list because it makes up for in drama what at it lacks in sheer dollar amount.

Notable for going neither to Elgin nor O’Hare, the Elgin O’Hare expressway at least gets to the later. The existing freeway will be tolled, a lane added, a free-flowing interchange with I-290 added, and extended eastward to the edge of O’Hare. There it will meet a new north-south tollway skirting the western edge of the airport.  These will be all electronic tolling.

Driving to Chicago is pleasant as far as Madison, on light traffic through the woods of Wisconsin, but then starts to suck. Traffic skyrockets, and the road narrows to four lanes, but relief is in sight.  Plans to add a 3rd freeway/tollway between Madison and Chicago  are in deep ice, so improvements are being made to the existing corridors. Wrapping up this year is a $2.5 billion widening and reconstructions of the Northwest, Jane Addams Tollway (I-90) to six lanes between Elgin and Rockford, and just starting is another $2.5 billion project to add a lane each direction east to the Kennedy Expressway from three to six or six to eight.  Wisconsin also plans $836 Million project from the state line to Madison (Rockford to the state line has already been widened). a As a semi-regular driver to Chicagoland I’d say this can’t come soon enough.

Because they like highways in Houston, this one is most definitely grand. It’s a third (toll) beltway roughly 180 miles in length. Segments F2, F2, and G, basically the northwest quarter totaling 38 miles, started construction this year and will finish late next year. Completed in 2013 was segment  E (15 miles, $320 million) 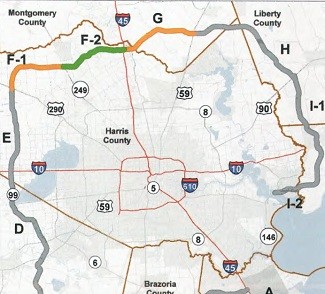