This post is an abridged version of a paper for a class at the University of Minnesota. 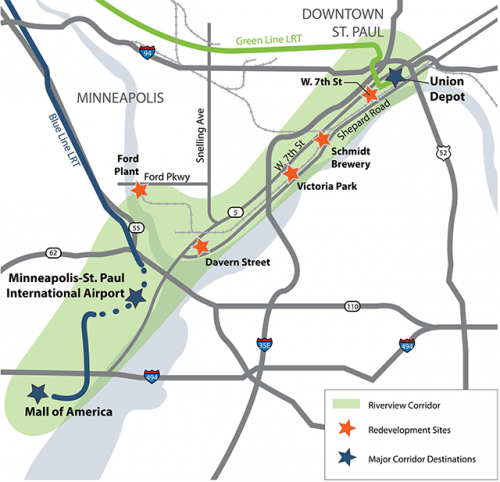 West Seventh is one of the most important corridors for the City of Saint Paul. Originally called Fort Road, West Seventh is the straightest route from Downtown Saint Paul to the airport and Mall of America. The road is a bustling corridor of activity with four bus routes near downtown, the road goes from a 4-lane, congested arterial, to a 4-lane DEATH ROAD™, to a nice three lane configuration as you get further from downtown, and the traffic thins out.

It all feels like a small city spreading out nicely, until you hit Otto. Now, it’s not Otto in itself that’s the issue, a tiny little collector road just north of I-35E. No, Otto is not what troubles me; however, around Otto is when the road expands from three lanes to four to five, and no doubt the conditions warrant such capacity expansion. On the northeast side of Otto (towards downtown), less than 9,000 vehicles per day use the road; once you cross the interstate, 31,000 vehicles a day are trying to squeeze through West Seventh’s lanes and the volume stays at 31,000 vehicles until it reaches grade separation at the river, heading for the airport*.

Why would the interstate have such a big influence on traffic, and why would it only be in one direction? The answer is the reason that MORE ROADS is the correct call in this situation.

Through Traffic vs. Local Traffic 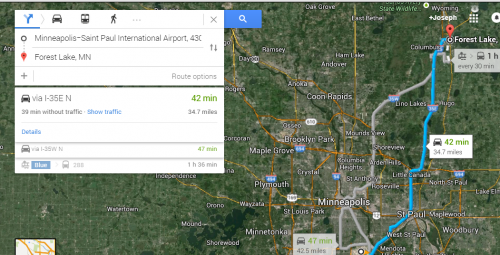 Even the Google machine wants me to cruise this wonderful avenue… to get home fastest.

West Seventh has become a through route for traffic from the northeast metro to reach the 494 strip, specifically the areas like the airport (when it’s congested Google will even send people from the Mall of America up good ol’ West Seventh). But surely, there must be a better way for people from the entire metro to reach the airport than along a commercial corridor within city limits! And there IS…almost, Shepard Road runs just to the south of West Seventh. As these pictures show, it is built to accommodate high speed through traffic much more than West Seventh is. (NOTE: A friend took these pictures from the passenger’s side, do NOT photograph, snapchat, text, eat, shave, or do anything else while driving; both my mother and I would prefer it if you didn’t kill me.) 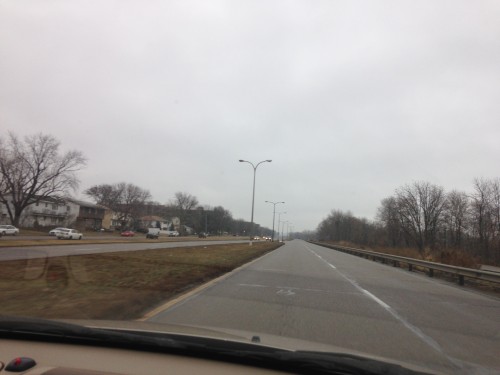 Shepard Road, with the median, guard rails, frontage roads, and overall design mimicking that of a divided highway. 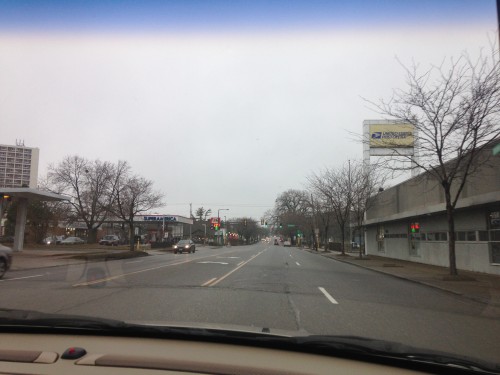 West Seventh, with sidewalks and buildings abutting the street.

From these two photos, you wouldn’t know it, but the road in the lower photo moves nearly twice as many vehicles as the road in the upper photo. Why does this happen? It happens because there is no way to use Shepard Road. Shepard’s interchange with 35E is only a half diamond, only allowing northbound traffic to exit the freeway, and southbound traffic to enter. Even if the road was nicely aligned** on the south end, connecting seamlessly to Minnesota Trunk Highway 5, people would still have to use West Seventh.

So what can we do? MORE ROADS! Actually, really this is MORE RAMPS LESS ROADS! Now, this ramp will be difficult to construct (either taking parkland or some serious engineering difficulties), but if it was built we could reduce the traffic by two lanes on West Seventh. Room for a proper buffer zone, street parking next to businesses, and bike lanes? What about a sidewalk on the opposite side of the street? These improvements could happen with no right-of-way acquisitions, if we could only get through traffic to use Shepard instead of West Seventh.

1 – West Seventh also has a high speed limit, which could be reduced if it was not a through route.

2 – Maybe Sibley Plaza is just the place to be, I don’t actually KNOW how many people are making this through routing. That would require funds well beyond streets.mn’s capacity, much less my own.

3 – Selling the businesses that less (40+ mph) car traffic is good for business might be really hard actually… The corridor has become very auto-centric south of Montreal. And while the numbers show that the businesses should not have much to worry about, these businesses look more like the exceptions than most other urban arterials.

4 – If you would like a more full version of the paper, detailing how to sell businesses on the idea, how to use the space provided, and why this is a good idea otherwise, comment below and I will try to work something out, but my internet does not seem to like adding links to documents right now.

5 – Something that I didn’t write into the article, West Seventh IS Minnesota Trunk Highway 5, for these improvements to be made that designation will have to be shifted to Shepard, or relinquished overall.