This is part 4 of an ongoing series on traffic signals. Part one looked at vehicle signals in general, Part two and part three looked at left turns. In this part we get into more detail on pedestrian signals.

Since almost the beginning it was recognized that additional accommodations needed to be made to pedestrians. As early as 1930 federal standards encouraged signals at the corners of the intersections, where they could easily be seen by pedestrians and cars alike, however in practice agencies would go the cheap route and hang a single stoplight over the center of the intersection. (Earlier I mentioned the Darley, the ultimate in cheap, which used only three bulbs and had a simple, integrated controller). Such a signal would be hard to see by pedestrians and traffic near the intersection alike (in fact there were gizmos that consisted of a prism to be mounted to your rear-view mirror to make it easier to see overhead signals). As a rudimentary accommodation, the Crouse-Hinds “Smiley Face” lenses came out, that were especially designed to throw light down.

Later, encouraged by traffic signal companies that wanted to sell more segments, a separate white on black “Walk” indication was introduced. Typically they would be added to the bottom of an existing signal.

Early pedestrian accommodation, first with the green lens designed to throw some light downward, then with the separate “Walk” lens

Orange and White vs Red and Green

From the early days orange and white were standard for pedestrian indications, but red and green were also used. Also, later on some of the whites were modified to “lunar white”, by using a light blue filter over the yellowish incandescent lamps. The theory is that this made the white color more distinctive as opposed to all the other incandescent lamps around, but it decreased the overall brightness, and was never universally adopted until the LED era, with LEDs being naturally lunar white. There was also experiments with aqua blue “Walk” lenses that never caught on, nor were officially sanctioned.

In 1961 “Wait” was replaced by “Don’t Walk”, and flashing the clearance interval was introduced.  Telling pedestrians what to do rather than what not to do was seen as more direct (and audible pedestrian buttons still say “Wait”), but “Walk” and “Wait” looked similar enough to be confused on a small lens across the intersection. People being like the are, pedestrians tended to notice how long the clearance interval and buffer were, and would start walking on the “Wait” indication, sometimes with very little time actually left. Flashing the clearance and thus separating it from the buffer gave differentiation to what in reality  meant “start walking if you can move fast” and “get out of the intersection now”.  The later introductions of countdowns gave further feedback as to exactly how much time they had.

As a side note, there used to exist flashing “Walk”s, and most controllers have a setting for selecting it. Notably Washington DC would use to to indicate when permissive vehicle turns were allowed to cross the crosswalk, and thus for pedestrians to be on the lookout for cars failing to yield.

Although used in other warm climates and New York, neon pedestrian signals are most associtated with California. The original versions had an red “Wait” and green “Walk” spelled out in neon in very heavy casting. Later models were lighter weight, spelled Don’t Walk and “Walk”, and were bimodal- the clear red tubing was overlaid on top of the opaque green tubing resulting in the “Walk” being able to light up two colors. This was the only model of pedestrian signal ever to have the correct apostrophe in “Don’t”. In the early 1970s new California standards required standard lettering rather than spelled out in neon, so plastic lenses were backlit with neon, and the colors changed to orange and lunar white.

Below is a classic bimodal “Walk / Don’t Walk in operation

Internal view of the Econolite “E8” neons. The black boxes to the right are the high voltage (5,000 and 9,500 volt) transformers for the tubing, which is contained in the metal trays mounted to the door.

The hot dry climate of California was ideal for neon, and many existed from the 1980s up to the last one being converted to LED in 2012. By contrast in New York the cold affected the “Walk” tubing . The “Don’t Walk”s were filled with neon, but the “Walks were filled with mercury/argon, similar to a fluorescent lamp, and with the same dimness problem in cold weather. And the high voltage tended to short out in humid climates like Florida.

As a competitor to Econolite, a company called Indicator Control Corporation began by making their own neon signals in the 1970s. Originally these still had heavy transformers, but the neon tubing was in a sealed plastic “modular” unit. Later the magnetic transformers were replaced by switching power supplies and also incorporated within the modules, so maintaining neon became as easy as a modern LED; just toss the entire defective module and put a new one in. Notably, ICC introduced the standard 16″ by 18″ form factor that is still with us today.

ICC Neon module removed from external housing. These are about the same size and can be used like LED modules.

ICC module with cover removed. The power supplies have been reduced to small circuit boards behind not visable behind the tubing rather than huge, heavy transformers.

The neon signals had the advantage of being large and easy to see, however they were expensive and did not perform well in cold weather. As an alternative some companies made bimodal signals that were back-lit with incandescent bulbs; the “Don’t Walk” would light up red or orange, and then only the “Walk” would light up green or white. The Marbelite LPS-20 was one example. The lamps for the “Don’t Walk” indications were 65 volts and wired in series so if one burned out the signal would not light up with an orange “Walk”.  (These bulbs are now completely unobtainable, and collectors that don’t have working original lamps need to rewire their signals to accept regular voltage bulbs).  Unfortunately the plastic reflectors would get brittle and break, and even catch on fire. (Wink-O-Matic signals also had problematic plastic reflectors). Later Marbelite released the MPS-20 using the same casing that had separate sections for the “Walk” and “Don’t Walk” using metal reflectors.  Other companies like ASI and E-Man had casings of cheap stamped aluminum instead of cast, but at least had metal reflectors.

Internal view of the LPS-20. The metal plates inside were done to repair the reflectors, which had broken under the weight of the sockets while being shipped

As a side note, a fellow collector came up with a LPS-20 still in it’s original box that indicated it was to be shipped to the city of St. Paul. As I’ve never seen anything like it there, this is a mystery. Maybe they ordered one as an evaluation or something.

Almost from the beginning it was recognized that exclusive pedestrian phases (all vehicle traffic is stopped and pedestrians can cross in any direction, including diagonally) were desirable in certain locations that had both heavy turning traffic and heavy pedestrian traffic. In most cases this is done with standard signalling just by having the vehicle phases red and the pedestrian phases white in all directions, but some notable variations. The Harriss signal was used experimentally in the 1930s in New York, and was an effort to be more emphatic than a standard 8″ light, with a huge red hand (representing a policeman’s upright hand).

The bottom green light indicated vehicle traffic should go. A red hand surrounded by violet lights indicated that vehicle traffic should stop. When the orange light at the top was also lit pedestrians should go in all directions, the light went out as a blind clearance interval before the  hands changed to the green light, but this 5 second clearance interval meant that they better run. Later this became more widespread in New York, and became known as the “Barnes Dance” after a 1960s era transportation commissioner.

The experiment with these rather elaborate signals were not continued. After this another thing tried was a backlit sign panel that could flip between “Stop” and “Walk”. This was not widely adopted either. 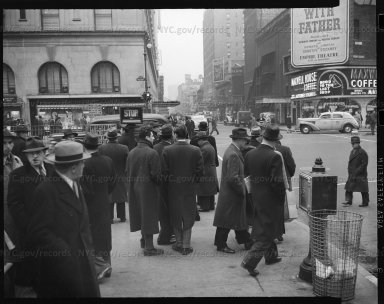 In Boston, which had a lot of very old equipment that was never updated and many intersections without pedestrian indications, a simultaneous red and yellow light would indicate that all cars should stop and pedestrians should go.  By 2012 when this video was shot such installations were very rare, and there may be none left.

Exclusive phases were never the norm, and recently they have been falling out of favor even more. Except for the very specific scenario of heavy pedestrian traffic and heavy turns it’s one of the most inefficient ways possible to run an intersection, and the new federal mandate of 3.5 ft/second of pedestrian clearance time instead of 4 compounded the problem. In Denver they removed the last of them to prevent gridlock with the coming of light rail.

Although the “hand” and “man” had been experimented with since the 1970s (they were adapted from signal designs in Europe), in 2000 is when they became mandatory for new installations. In 2003 came the requirement that they be filled in rather than outlines, and in 2009 countdown displays became mandatory and leading pedestrian intervals (to give pedestrians a head start before releasing traffic) were formally allowed. Here’s a comparison of five different pedestrian signals from my collection- neon, incandescent, and three styles of LEDs.

7 thoughts on “All About Pedestrian Signals”