This is Part Three in a series on traffic signal controllers. Part One covered an overview of a hardware, and Part Two continued with general issues of why they don’t always have features we’d like. As of note about terminology, I’ve generally used the term “vehicle” and “vehicle operations” to match engineering terminology, despite that fact that it is ultimately the human motorist whose time is wasted with poor vehicle operations, and that a bicycle is a vehicle, but it can be on the sidewalk or sidewalk / trail rather than the street, and the rider is affected differently than motorized vehicles. This part focuses on timing and phasing issues.

During each cycle you have some time where no one is utilizing the intersection. For simplicity let’s say the yellow and all red times are when no one can use the intersection.  (Although it’s well known motorists will “run” the yellow, and they can’t start immediately on green, in the real world these considerations usually exactly cancel each other out.)

Let’s take two extremes. 20 second Main Street green, and 7 second Side Street green, three second yellows, and  two second all reds. That means for that cycle only 73% of the time is green.

Now how about an 8 minute Main Street green (as actually implemented for US 10 in Royalton on Friday summer evenings) and say a 30 second Side Street green. Here 98% of the capacity is green.

Obviously there’s disadvantages to longer cycle times. Pedestrians have to wait longer in the cold if they want to cross the street that’s green. Motorists start to fume and may turn around and cut through neighborhood streets. The engineers’ phones start to ring with complaints. Like so much else, setting cycle times is a compromise based on judgement and trial and error.

Protected-only turn phases (you can only turn on a green arrow) have a pretty negative impact to vehicle operations. With protected phases both in directions, you’ve just doubled the yellow and red times per cycle, plus some of the turning traffic that time is devoted to may have been able to utilize gaps in the main phase had they been allowed to.

But why can’t lights be timed so you hit a series of greens? They try to (sometimes). And have been since almost the beginning of traffic signals. And computer modeling is making it a lot easier. But the suburbs, with their irregular traffic, irregular spacing between traffic signals, and frequent use of turn phases make it extremely challenging. One of the reasons you’re seeing many more where the turn arrow is at the end of the phase in one direction is that it was determined that is the most efficient way to coordinate (and the flashing yellow arrow makes it safe to do so with protected/permissive by eliminating the yellow trap).

Another problem is that although long phases are more efficient at moving traffic through an isolated intersection; short phases are better for progression. For progression on a two-way street you want to have a cycle take twice the time it takes a motorist to travel from one signal to another. Here’s a video of a NYC driver catching a green wave for 125 blocks. This is the ideal situation: late at night with little traffic on a one way.

Fixed time lights can actually work quite well in dense areas. A while ago NYC disconnected many sensors and reverted to fixed time (and left the pedestrian buttons abandoned, leading to the myth that they “don’t do anything”.

Portland and San Francisco, with their noted anti-car, pro-bicycle/pedestrian culture, have timed signals to create a green wave for bicycles. In downtown areas with signals every direction every block, it may be better just to have a string of lights turn green at the same time. This is easier to implement and if traffic is gridlocked it all starts moving at the same time.

Moving into pedestrian times first we need to define some terms. We have the walk interval (the time the “Walk” sign is illuminated), the pedestrian change interval, (when “Don’t Walk is flashing), and the buffer interval, (when the “Don’t Walk” sign is illuminated steady). The clearance time is the combination of the change interval + buffer interval. Here’s a graphic illustration, Minnesota uses the first option, where the pedestrian buffer interval starts with the vehicle change interval (the yellow light). Overlapping the buffer with the red clearance interval, like the 2nd, 3rd, and 4th options can reduce overall cycle times or increase the walk interval, but is problematic to program and reduces the time for pedestrians to scramble out of the intersection after the sign goes steady and before vehicles are released.

Pedestrian times are set with the following parameters:

1) The walk interval must be at least 7 seconds, unless it’s determined that 4 seconds is adequate in a specific location.

2) The clearance time is the distance from curb to curb in feet divided by 3.5 feet / second walking speed.

3) As mentioned above, in Minnesota, there is the two second red clearance interval after the clearance time.

4) There is another calculation that is made: the time of the entire phase must equal the distance from the near push-button to the far curb divided by 3.0 feet / second. In practice this doesn’t become the limiting factor until road widths become extremely large, in the order of 100 feet or more, so we will ignore it for a while

5) 4.0 feet / second walking speed was formerly the national standard, but is now only allowed if there is a provision for a pedestrian requesting extra time at the button, or pedestrian sensors in use. I am not aware of these features being implemented in Minnesota.

Refuge islands  count as far as setting time to the far curb; in practice the time is usually more generous than the minimum, since the goal isn’t to make every pedestrian wait in the middle, just reduce the times so the slowest possible pedestrian doesn’t impact vehicle operations too much.

Pedestrian Recall- Why or Why not.

Sometimes the “Walk” sign goes on every cycle (ped recall), and sometimes not. Generally speaking:

1) In a fixed time intersection, there is no provision for vehicle sensors or pedestrian push-buttons, so ped recall is enabled all the time in all directions.

2) In a semi-actuated intersection, some directions have sensors and some don’t, so ped recall may be enabled some direction but not others. In the past the presence or lack of pedestrian buttons was a good indication of whether an intersection was actuated or not, but with the advent of accessible pedestrian signals they all have buttons.

3) For fully actuated intersections, ped recall may or may not be enabled if it can be without degrading vehicle operations. Sometimes the limiting factor in how short an intersection phase can be is the pedestrian phase, sometimes the vehicle phase. Lets look at two scenarios.

Scenario 1: 56th Street at Penn Ave , 56th is 35 feet wide, Penn is 40 feet wide. 40 second minimum vehicle phase on Penn, 15 seconds on 56th. The minimum pedestrian phase is  21 seconds (7+40/3.5 + 2) in theory across Penn, 19 seconds on 56th (but is 25/22  seconds as programmed- they made the change interval longer than what is required) Vehicle phase is the limiting factor across 56th, Ped phase is across Penn. So ped recall is programmed in the former but not the later.

The only impact to vehicles is if a vehicle arrives on 56th and there is no traffic on Penn after the minimum green time, they may have to wait through Penn’s change interval before getting their green. This is mitigated somewhat by having the ped signals repeatedly count down and then go back to walk, at the cost of making a pedestrian wait if they don’t arrive during one of the walk intervals.

Scenario 2: American Blvd at Grand Ave (better known as  Home Depot Driveway) Six lane wide suburban-style road about 90 feet wide,  15 second vehicle phase for Grand Ave.  If a pedestrian phase is present, the minimum time is 35 seconds (7 + 90/3.5 + 2) both in theory and practice, so a pedestrian phase impacts vehicle operations pretty severely. It’s such a problem that engineers try to deal with it by either by adding a refuge island in the center (as has been discussed as a solution for various places on American) so a slow pedestrian has to use two cycles to cross. Or by fudging on the timing so the 3.5 feet / second rule only gets to the center of the last lane (the theory no doubt being the driver in the last lane is going to look before starting…).

There is no ped recall on any crossing at Grand and American, but with the 70 second phase for American Blvd. an engineer could enable it to cross Grand with essentially zero impact to vehicle operations. Why don’t they? A blanket policy not too? Didn’t think of it? The way it’s always been done? I don’t know. (The city of Bloomington has been less than friendly and responsive with my dealings with them so I didn’t even attempt to get an answer). Engineers (and from what I perceive of  the general public) just don’t see the act of pushing a button either as especially difficult nor the supreme ideological insult.

Ped Recall may or may not have an impact on vehicle operations, but exclusive pedestrian phases almost always have an extremely severe impact.  Rather than sharing the intersection, vehicles and pedestrians use the intersection sequentially, the most inefficient way possible, and a ban on right turn on red is essentially required.  The problem is compounded by the recent reduction of assumed pedestrian walking speed from 4.0 to 3.5 feet a second. The vehicle delays are so extreme that Denver, not exactly a bastion of conservatism, removed the last of theirs fearing gridlock with the reduction of walking speed and the coming of light rail. 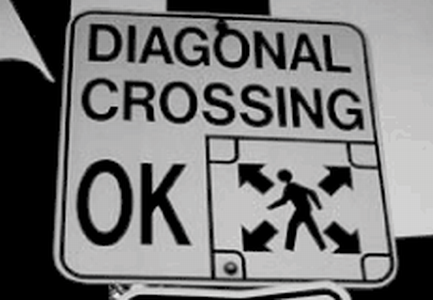 So let’s chart our intersections “as is”, with ped recall on all phases, and with an exclusive pedestrian phase. (To keep things simple I’ve used the theoretical 3.5 ft/s walking time even though they are more generous than that on Penn.) Wasted Green Time is when the vehicle signal has to be green because of the pedestrian phase, but no vehicles are there. And we’ve already calculated concurrent phasing, so let’s calculate exclusive phasing. Penn Ave S. at 56th is 65 feet diagonally, 7 + 65/3.5 = 26 seconds. American Blvd at Grand Ave is 11o feet diagonally from curb to curb, 120 feet from button to far curb. This is getting pretty wide, so we better check both calculations. 7+ 110/3.5 = 40 seconds, 120/3 = 40 seconds. So interestingly this is exactly where the two calculations meet.

Obviously this has a big impact to vehicle operations. But what if we decide that motorists can sit and stew because all we care about is pedestrians? Well, it’s not so clear then either. There are drawbacks to X-ped to pedestrians too. It increases their average wait time. (One intersection that was modeled increased it from 34.7 seconds to 49.5 seconds- LOS D to LOS E.) The tendency is to get impatient and jaywalk against the “Don’t Walk” sign, where motorists see they have the right-of-way and thus are not looking for pedestrians. An Israeli study showed  that X-Ped is safer as far as vehicle vs pedestrian crashes at heavy vehicle volumes (18%), but more dangerous at lower vehicle volumes (-8%). Like most everything else in engineering it’s a trade-off between safety and efficiency.

The next article will continue with commonly asked questions about signals.