As the next part in my ongoing series of traffic signals and controllers, here is a look at what the rest of the nation, Canada, and the rest of the world do differently than Minnesota.

Minnesota vs the Rest of the Country

1) As I’ve mentioned before, protected only turns (where left turning traffic has a red arrow and must wait a whole cycle if they arrive one second after the typical 10 second green), are much less common. Only in California have I seen more than in the Twin Cities suburbs. These are becoming less common with the debut of flashing yellow arrows, the feeling being that with the extra warning to yield, left turning drivers can now be trusted to make good decisions.

Hurry up and wait.

2) The usual arrangement for 5-light signals is the “doghouse”, rather than the 5-light vertical. Vertical signals are mainly used in Minnesota, Wisconsin, Illinois, South Dakota, and Arkansas; other areas use the doghouse configuration. With the adoption of the 5-light bimodal flashing yellow arrow, probably at the urging of the FHWA, Minnesota and Wisconsin are adopting the doghouse. (And much more common is a 5-light vertical  to be replaced with a 4-section flashing yellow arrow, although agencies that refuse to use flashing yellow arrows, like the city of Minneapolis, are still erecting new vertical installations.)

2) Signals hung from overhead span wires are not used in Minnesota, except in temporary installations (although some, like MN 62 at Hiawatha, persisted for decades for various reasons). MN 36 in Lake Elmo will likely be the same story. These are more common in permanent installations out east, which are usually metal poles, and usually a lot neater than the wood poles that Minnesota slops together. There are also quite a few surviving 4-way signals, some converted to LED. With the requirement of more than one signal head in each direction, these were augmented with two single faces tied together on either side, for a total of two facing each direction. Looking at old photos, Minnesota always seems to have preferred putting them on posts on the side, I’ve never seen a 4-way here.

3)  Minnesota always puts signals on the poles on each side of the mast (and these are useful if there’s a truck blocking your overhead view. Other states do not always do this. It might be carried over from masts supplementing side signals in Minnesota, and replacing overhead span wires in other states.

3) Of course, some signals are mounted horizontally elsewhere, as we’ve all seen in Wisconsin (although their new standards are vertical only). These are also common in Texas and Florida.

4) Eagle brand signals are a lot less common elsewhere. Possibly because of their Quad Cities location (stuff cost a lot more to ship in days gone by), Eagle in all its various incarnations, from the 1940’s Eagleluxes up to the 2000’s Bubblebacks, had a virtual monopoly on the signal market. In other areas of the country, Crouse-Hinds (of New York), and Econolite (of southern California) are a lot more common. McCain, a new player making a big splash with boring but functional equipment, is becoming more common both in Minnesota and nationwide.

5) Of course other agencies have their own quirks. Obviously there are too many to list, but Chicago DOT does whatever they feel like, nationals standards be damned.

We don’t need any stinkin’ red arrows for protected only turns.

The US vs Canada

1) The flashing green ball in BC is used at intersections where a pedestrian can stop traffic to cross. The light will flash green until a button is pushed, then solid green, yellow, and red.

In Ontario it has the same meaning as a left turn arrow in the US. In some places the flashing is much faster than in the US. I called them “seizure lights” and my sister called them “disco lights”.

2) Some provinces use square reds and yellow diamonds as assistance to the colorblind. Except for Quebec, they seem to be on their way out.

3) Pedestrian symbols are red and green, and are always outlines (as opposed to the US where they’re now required to be all solid). There’s a subtle difference to the hands, but a large difference to the mans.  This one is Canadian standard but is actually in Osseo. A Canadian company called Ecolux was one of the first with LED signals, so some Canadian stuff snuck in down here. Canada also generally uses circular lenses.

Not really related, but because I think they’re cool, a moose warning sign in New Brunswick, and a stained glass representation of the Confederation Bridge at the visitors center. Tolls on PEI are one way leaving the island, leading to the slogan “You only have to pay if you want to leave”, but still was a bit of a shock paying a $45 bridge toll.

The Rest of the World

I’ve not been out of the US and Canada since 1985, when I was a child, but here are some of my understandings based on conversations with other road and traffic signal enthusiasts.

1) Fixed time signals are much more common than actuated signals.

2) There’s a much wider variety of configurations, and some vehicle signals have countdown displays until the light turns green light, or until the light turns red. These are specifically banned by the MUTCD on the grounds that studies have shown no benefit, and there’s been suggestions to try to hide pedestrian countdowns from motorists because motorists were looking at them.  I’m guilty of that myself. After driving around San Francisco for several days where the vehicle light turns yellow at zero, I angered a truck driver behind me in Grant’s Pass by slowing down where the countdown went to zero with the light still green.

To get vehicle countdowns to work in the US requires technology that hasn’t been implemented here yet. The pedestrian countdowns were designed to “drop in” to existing installations and memorize how long the change interval is, which works because unlike a vehicle signal the pedestrian change interval never varies; there’s no additional wiring beyond the mains wiring for the two indications. 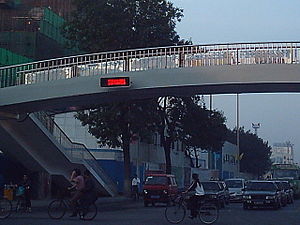 The beautiful “Spiderweb” lenses were only used in the US in the 1940s; they stuck around in Europe

2) They have stuck with LED look indications, and in turn have developed thinner signal heads that can only accommodate them rather than switching to “incandescent look” modules that require as much depth as an incandescent reflector.

Relative depth of LED look module on the left, incandescent look on the right.

The famous Ampelmännchen of East Germany.

Animations are common in Asian countries. Notice that the animated pedestrian speeds up and starts “running” as time expires

Uniquely, some German pedestrian push-buttons allow you to play Pong with the person across the street while waiting for a “Walk” signal.

This was actually an ad campaign: people could walk into a booth where their dance moves were copied on the Don’t Walk light, but 81% more pedestrians waited for the light.

Fundamentally too, other countries, including Canada, use red and green for pedestrian signals, instead of orange and white. I covered the development of pedestrian signals earlier, but I’ll repeat, expand,and speculate. In the US the word “Walk” was originally in thin art-deco letters on  8″ round lenses, usually mounted on the same head as vehicle signals.

A green lens would have made it even harder to read across an intersection and possibly be confused with the adjacent green vehicle light. When the orange “Wait” indication was added and moved to a separate head, an orange stripe was added to the top and bottom to make it easy to see and differentiate. The neons, which were a large separate head and one color, were as efficient as another and no way to be mistaken for a vehicle signal, used red and green until they were forced to change. (Red is the “default” color in neon because it is cheaper and lasts longer than other colors). I believe Europe used icons (easier to see) on a separate head from the beginning.

Easy to see in my basement, not across a bright sunny street.

No trouble reading this or mistaking this for a vehicle signal

4) Some areas have a yellow before the green. This reduces reaction time and gives motorists with manual transmissions (the norm in much of the rest of the world) time to drop the clutch, but can also encourage people to jump the light. Interestingly some early American signals by their design also used a yellow before the green, like the el-cheapo 3-lamp Darley

5) Installations are usually less elaborate than in the US.

6) Right turn on red is prohibited unless specifically allowed. Universal RTOR is one of the legacies of the 1970’s oil crises,  the other being the 55 mph speed limit. The first is definitely pro-motorist, the second anti-motorist, so it’s not hard to understand why the first hung around in North America but not the second. Various countries use various means to indicate that a RTOR is allowed. Some use signs and some use signal indications, for example Germany uses a sign and France uses a flashing yellow arrow. Of course RTOR is controversial in the cities, with some feeling they should be banned and some noting a problem of drivers doing them illegally anyway in places they are banned. And that’s a subject for another article, along with my ideas to make right turns safer and improve LOS for pedestrians.