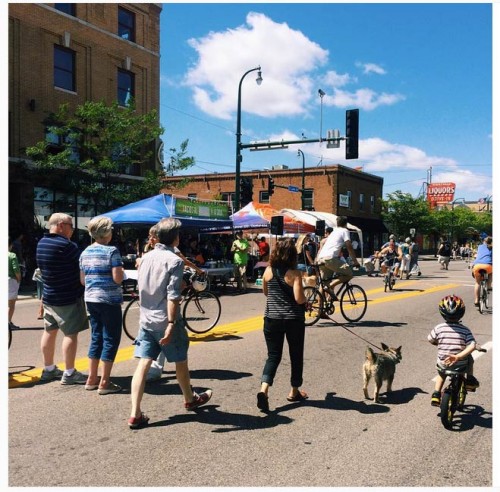 Sunday’s Open Streets on East Lake Street was the biggest ever. (Or so I hear; I wasn’t there, I was off doing this.)

A while back I was interviewing an East Lake business owner for a story I was working on, and a neighborhood organizer came up to the table to chat. We ended up talking about how hard it was to keep businesses running on East Lake Street.

“We really missed the boat when they did the street reconstruction,” she told me. “We should have had a 4-3 conversion.”

Amen. If you’ve lived in Minneapolis for more than five years, you probably remember the massive East Lake street reconstruction project, where Hennepin County completely tore up the road and replaced it with brand new sidewalks, nice and wide.

Here’s what I wrote about this stretch of East Lake back back during the reconstruction process:

One of the interesting details of this photo is the way that the new, streetscaped sidewalk comes up to the car lot… Minneapolis finally invested in some infrastructure improvements along Lake Street a few years ago, and this stretch along East Lake is the last part of the avenue to get made over. They widened and re-poured all the sidewalks along the route, , and re-did the tree plantings. I guess the idea is to improve the pedestrian experience along the route, and in the picture at right you can see where the new sidewalk replaces the old sidewalk (right in front of the E. Lake White Castle). So far, I’m not that impressed with the new sidewalk… its so bright and glare-y, and the trees have yet to attain any sort of respectable size. Time will tell, though, and in a few years I think the Lake Street pedestrian experience will be vastly improved. It might even start a renaissance along the boulevard, and maybe someday a few of these car dealers might become corner stores, bars, or shops.

Well I was a bit young and dumb. The new sidewalks were and are fantastic, accommodating to just about everyone that might possibly use them. And they were in full splendor on Sunday. But the East Lake renaissance that I hoped for remains sluggish. There are signs that things are improving (see the new Himalayan Restaurant, replacing the old Kong’s), but it’s still a very sleepy part of town.

Street design as an economic driver 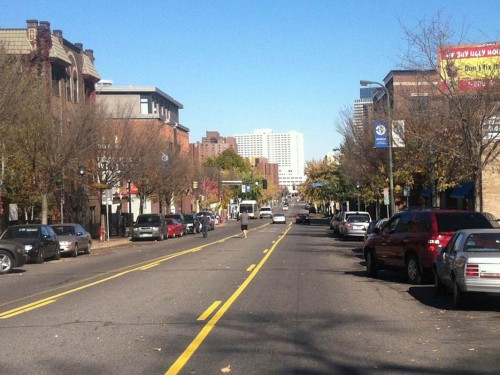 It turns out that sidewalks alone do not make a great city. Walking around East Lake Street still feels eerie, mostly because the road is far wider than it should be. At any time outside of rush hour, there is rarely much traffic. But crossing the four lanes (plus lots of wiggle room), and walking along it, feel daunting and vacuous.

I’ve written before about all the reasons that 4-3 conversions are good ideas. They’re safer for drivers because they provide predictable turning lanes. And they allow space for bicyclists, as giving up one outer traffic lane means that there’s room for decent bike lanes on the street. As someone who rides a bike regularly down East Lake, that would be a major improvement! (Currently, many cars still buzz me as I travel down the right-hand side of the road.)

But there’s another reason for traffic calming that has less to do with bikes or safety, and more to do with improving access. Streets with a center turn lane are simpler and safer for pedestrians to navigate, especially if a few crossing medians (or bumpouts) are thrown in for good measure. You can stand in the middle of the street, take refuge, and cross more carefully. And the center lane of traffic is inherently very slow moving and careful.

Most importantly, the design mostly solves the common “crosswalk death trap” problem, where one car stops for a crossing pedestrian only to have a car behind it speed up and pass alongside. When combined with easy bicycle access, all these changes make 3-lane road designs much more accommodating to businesses. After all, it’s not the total number of cars that make a good location for a café or store, it’s how many drivers actually park their cars and get out to shop. In other words, placing pedestrians first is a great businesses decision.

Raising the bar on traffic counts 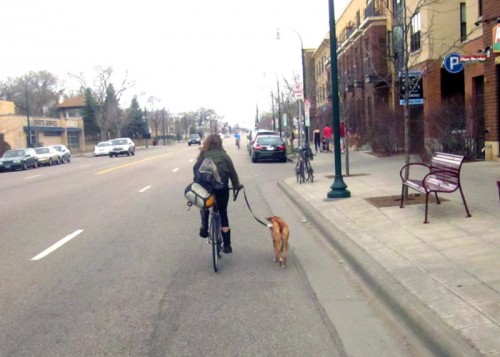 Woman biking on East Lake while walking a dog.

Looking at East Lake, it’s difficult to explain exactly why the area remains somewhat economically desolate. (See this podcast that tries.) Sure there are a few businesses that have popped up and are thriving. but for every Merlin’s Rest or Sonora Grill, there are a few places (Parka springs to mind, or the new Riverside Market) that struggle to attract steady business.

When Hennepin County was making the decision to design the road with four through lanes, they probably were using the current high threshold traffic count standards to consider 4-3 conversions. Most Twin Cities public works departments continue to insist that 4-3 conversions are impossible for any road with ADTs (average daily traffic counts) above 15,000 cars per day. But there are many examples from around the country where 4-3 conversions worked well, creating a safer road while boosting the local economy, even on roads with over 20,000 daily cars. With an extra-wide right-of-way, and just barely eclipsing 15,000 cars per day in only in a few places, East Lake seems like the perfect candidate for such an “experiment” in Minneapolis.

The current design of East Lake street is doing the neighborhood few favors. Sure it might be conducive to higher speeds, which might help you get to Saint Paul a few seconds faster. But the thriving street life during Sunday’s Open Streets suggest that Hennepin County screwed up when they reconstructed East Lake years ago. A 3-lane design would be safer for everyone, and help bring needed economic vitality to a long-struggling area.

Open Streets are more than just a fun festival. The events are supposed to lead to re-thinking our street design priorities. The logical next step for East Lake is to consider re-striping the road with center turn lanes. I believe it would ensure that every day feels a bit more like it did on Sunday. 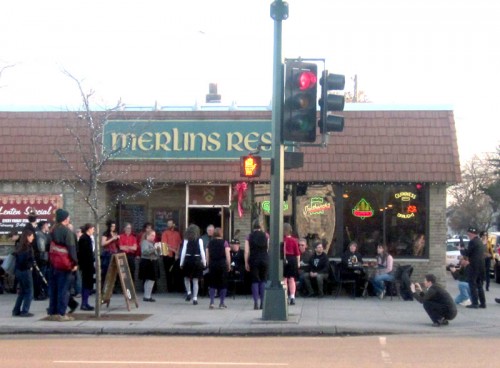 Dancing outside Merlin’s in wintertime: the exception that proves the rule.