You might have heard the recent news surrounding the increase in adult cyclist mortality rates, part of a CDC study released this month. 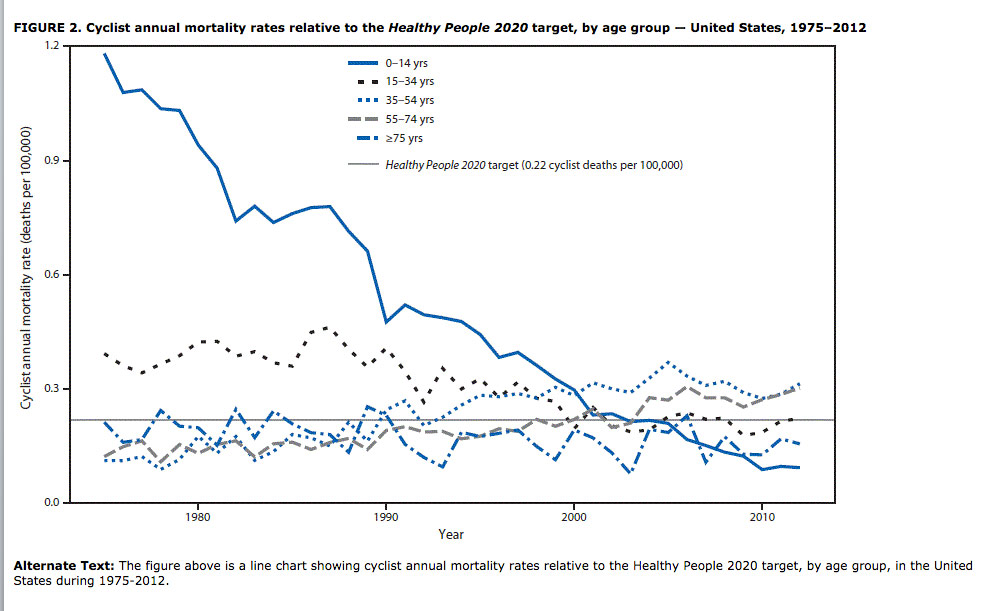 There are a number of key caveats with this study, including a lack of data, a lack of consideration for the amount of cycling per capita, and a lack of differentiation between cities and states. (For example, it’s much safer to ride a bicycle in Minneapolis than  it is in Orlando.) Here are some of the qualms listed at the end of the report:

… mortality rates based on population do not account for exposure to bicycling in the way that expressing deaths per unit time bicycling, distance traveled, or number of trips would. This analysis found that approximately 2% of 2009 motor vehicle–related deaths were cyclists, and data from the 2009 National Household Travel Survey suggest that travel by bicycle accounted for 0.9% of all travel time and 0.2% of all travel distance (8). Mode-specific deaths expressed per unit distance traveled or per trip would likely further highlight disparities between modes (2).

This report underscores the importance of improving bicycle safety in the United States with the aim of preventing fatalities. In addition, a common perception that cycling is unsafe might contribute to low levels of bicycling, diminishing opportunities for physical activity, particularly among women and children (10). Several countries and some U.S. cities have higher bicycle use and lower mortality rates than the United States overall. Many have implemented multifaceted, integrated approaches to bicycling that address safety while also promoting cycling (1). Such approaches often include extensive bicycle infrastructure (e.g., physically separated bike lanes), traffic calming measures (e.g., speed humps), legal interventions (e.g., lowered speed limits), travel programs (e.g., safe routes to school), and education to encourage safe bicyclist and motorist behavior (1)

Studies like this always get a lot of media attention, but the question remains about whether this kind of attention fuels a fear of cycling. It’s not that this data is wrong, rather that it doesn’t tell us much. Young people ride bicycles a lot less than they used to, while rates of adult bicycling are increasing every year. You’d expect to see these kinds of trends…

The takeaway for me? We have a long ways to go before the “safety in numbers” effect starts to really kick in.