The City of Roseville has a great opportunity available. If they take advantage of it.

Jones Lange LaSalle, the owners of Rosedale Mall want to add a 140,000 sq ft addition to the NW side of the mall along with developing two or more out lots or pads.

To make up for the loss of 360 parking spaces they want to add additional parking ramp space with about 420 spaces. The out lot development will use excess unused parking space so there is no need to replace it. 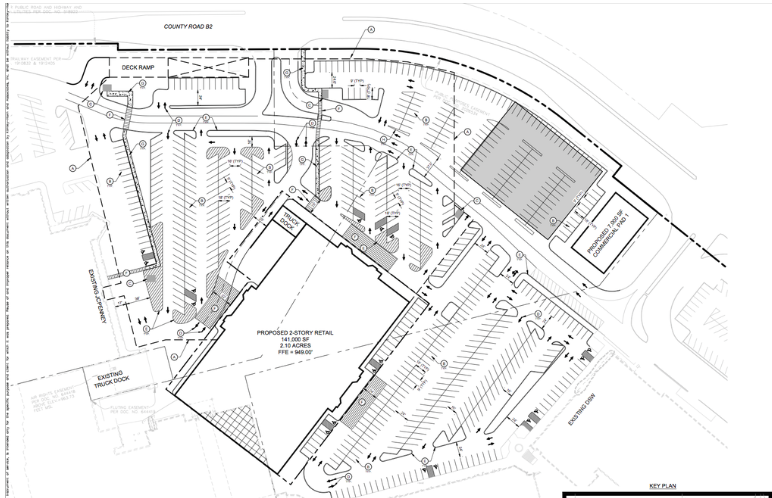 Rosedale Mall is, for people walking or riding bicycles, perhaps best described as an impenetrable fortress. You can’t get there from here. At least not if you value your life and nerves. 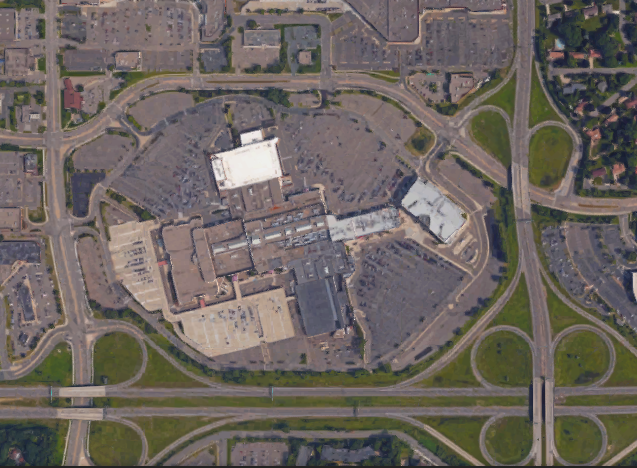 This is particularly a problem when you consider how many tens of thousands of people live within easy walking and bicycling distance of the mall. Topping this list are the 19,000 students of The University of Northwestern, Bethel University, and University of Minnesota — St Paul Campus that are all within about two miles, or a 10 minute bicycle ride, of Rosedale.

The main U of MN campus is just 3 more miles away via a direct bikeway (the transitway). At 5.5 miles, this is still an easy 30 minute ride, and is already a popular bicycle route with students, faculty, and others.

Besides the students, there are a lot of single family residential buildings in the area, and a significant amount of multi-family buildings within a 10 minute bicycle ride. Many of these do not have cars and currently utilize taxis, transit, or bicycles to get to local amenities.

The Opportunity to Fix a Longstanding Problem

As part of approving the expansion plan, Roseville should require that Jones Lange LaSalle provide safe and practical pedestrian and bicycle facilities.

Starting from the mall and working our way out like a spider web:

Parking — Provide parking for bicycles that is safe, located near entrances, and ideally, covered.

Access — Safe and useable access infrastructure from the perimeter, across the parking lots to the mall should be provided. At minimum, there should be one route from the north for people coming from the University of Northwestern, Bethel University, and multi-tenant and other residential on the north side of the mall and another on the west or southwest for people arriving via the bikeway along Fairview such as from the U of M.

(Ideally there should also be access from the southeast. Done properly this would likely require a bridge or tunnel traversing Highway 36 and Snelling Ave. For now let’s leave this for another day.)

These should each comprise separate, protected, and dedicated space for people walking and riding bicycles. Perhaps a six foot walkway, twelve foot two-way bikeway, along with deciduous trees on each side to provide shade and separation from the parking dessert. 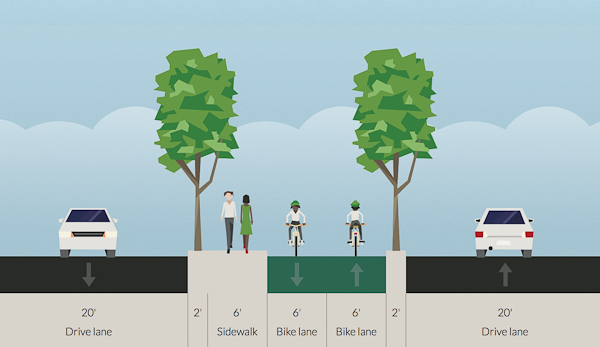 These access corridors will not only provide access for people coming from outside the mall but also for people walking from cars parked out near the perimeter and from businesses located in the out lots.

If done correctly this will also help to soften the brutal aesthetic impact of the mall and parking lots on the community. 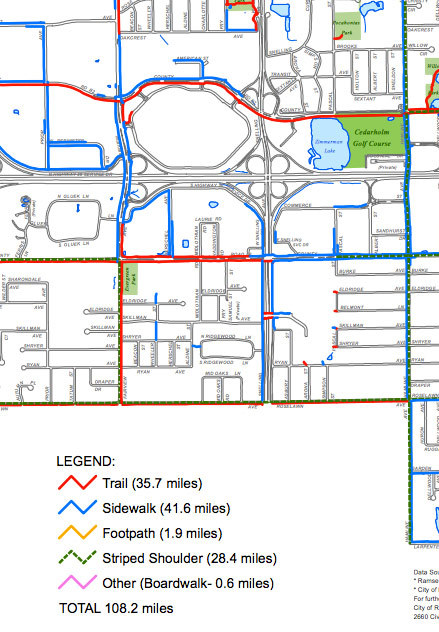 Detail of the Rosedale area from the Roseville Pathways map.

Connections — Beyond the bounds of the Mall property there is a need to link the mall to local residents and to local bicycle and pedestrian infrastructure which is sorely lacking in Roseville. (I once described Roseville as a bunch of high speed traffic lanes occasionally interrupted by places to live.)

This is much less costly than building or expanding roads but still requires some money. Perhaps Jones Lange LaSalle can contribute to development of these bike and ped ways. While Rosedale likely does contribute some money to Roseville and Ramsey County through taxes, it also imposes significant costs; direct costs for roads, maintenance, and police, and indirect costs in air, noise, and traffic pollution.

The two key missing connections to the West and Fairview Avenue, and to the Northeast for those coming from the two universities and other residential areas. Fairview already has a somewhat useable bikeway, though it needs improvement . The top priority and most expense will be a bikeway connecting to Northwestern, Bethel, and neighborhoods to the North.

I would guess that about 15-20% of the people who drive to Rosedale to work or shop live within bicycling and walking distance, and that maybe a quarter to half of these would walk or ride a bicycle if they have a safe place to do so[1].

Rosedale currently has some excess parking capacity. I don’t know that people walking and bicycling would eliminate the need for the new parking ramp, but it would likely allow them to reduce the size. More important though would be the many other benefits of allowing more people to bike and walk.

The Roseville City Council will be discussing and voting on this at their meeting on the 21st of September. Feel free to reach out to them and let them know what you think!

[1] Some people, particularly workers, also come via public (MTC and formerly Roseville Circulator, now MTC 223, 225, and 227) and private (The University of Northwestern) transit.

15 thoughts on “Rosedale Expansion is a Great Opportunity for Roseville”