Note: This post is part of the streets.mn/Nice Ride crowdsource conversation, a series of crowdsourced looks at how to expand or improve Nice Ride planning.Check out the rest here.

I live in the Lexington-Hamline neighborhood of Saint Paul, which stretches from University Avenue south to Summit Avenue between Hamline Avenue and Lexington Parkway. When Nice Ride expanded into Saint Paul, we got Nice Ride stations on Hamline near the Western District Police Station, and on Lexington at University, close to the nearby Green Line stations. 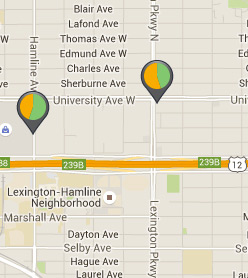 The Nice Ride stations near the Green Line along University Avenue in Saint Paul should serve “last mile” riders, connecting transit users with their local destinations. Unfortunately, these stations are among the least utilized in the Nice Ride system. According to the National Association of City Transportation Officials’ analysis of bike share systems, people use bike share when it’s convenient to where they are and to where they want to go. The more stations there are in a neighborhood, the more they get used.

With so few stations within a mile to connect to, it is no surprise that few people are finding them convenient to ride. Moreover, the corner of Lexington and University is a desolate landscape for cyclists, leaving potential Nice Riders wondering where they are supposed to ride.

An Alternative Plan for Lex-Ham 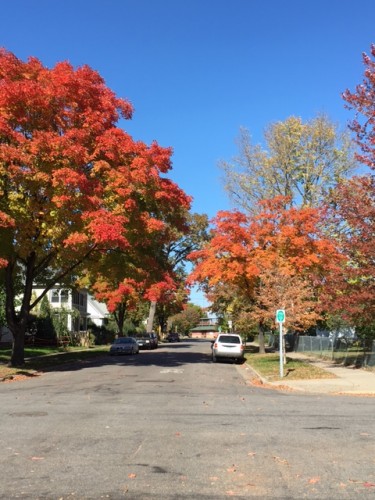 Fall colors on the Griggs Bikeway (Griggs and Dayton)

I propose placing Nice Ride stations along the Griggs Street Bikeway to better connect Lex-Ham with the Green Line. The Griggs Bikeway is a north-south bike boulevard connecting Summit Ave to Minnehaha Ave along Griggs Street, two blocks west of Lexington Parkway. It’s one of my favorite parts of my neighborhood, as the quiet residential on-street biking environment changes to off street path north of Marshall, passing the Dunning Rec Center, baseball fields, and community gardens on the way to a pedestrian-bike bridge over I-94.

I always see people biking there, but it feels like I’m part of a secret society in the know. At the Lexington/University Nice Ride station, it’s hard to imagine that two blocks over, there is a comfortable place to ride. Placing stations along the Griggs Bikeway draws riders to our not-so-obvious bike infrastructure.

There are several destinations with lots of people that Nice Ride could serve along the Griggs Bikeway.  There are three high schools, Concordia University, and Skyline Tower, an affordable housing complex with over 500 units.

I propose two station locations: the first at Carroll Avenue and Griggs, north of the Dunning Rec Center. Central High School is just to the east and Concordia University is just to the west. The second station I propose is at Griggs north of Bigelow Avenue, next to Skyline Tower. The vacant lot just northeast of Skyline Tower will soon be transformed into a park with a soccer field and gardens. Just north are Gordon Parks High School and High School for Recording Arts. 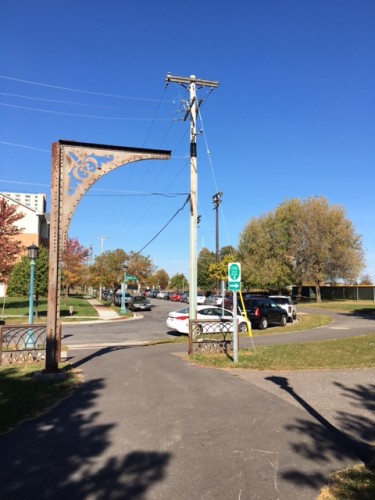 Site of first proposed Nice Ride station at Griggs and Carroll, viewed from the south 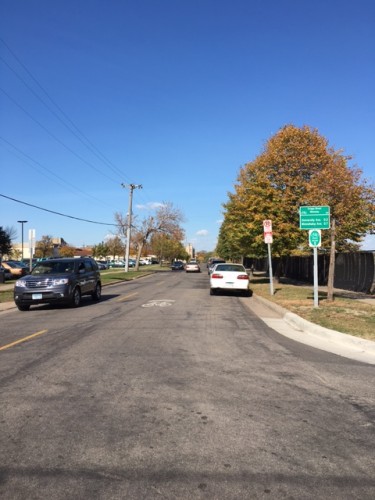 Nice Ride as a Tool for Change

In Nice Ride’s 5-Year Assessment and Strategic Plan, the underwhelming response to Nice Ride stations in Saint Paul was discussed. It was noted that Nice Ride preceded major bike infrastructure, came during the period of light rail construction, and came to seen as a “political tool” intended to “change the conversation” from parking woes to active and livable streets. The report concludes “a system operating well below capacity does not change peoples’ perceptions of an urban area or make cycling a mainstream activity in those places.”

I could not agree more. Nice Ride’s mission is to transport people in a convenient, active, and fun way. It’s our job to change the conversation, and if we want to talk about Nice Ride, there need to be people using the Nice Ride bikes; otherwise they add to the (mis)perception that people don’t bike here.

In the future, a dense, viable network of Nice Ride stations may be possible in the Midway as transit-oriented development changes the retail/parking-dominated landscape. In the meantime, thoughtfully placed stations can help connect people from the train to their homes, schools, and places of work, while accomplishing the equity portion of Nice Ride’s mission.

Saint Paul has a long way to go to be the “liveable, equitable, and sustainable” city it aspires to be, but Nice Ride can help get us there. 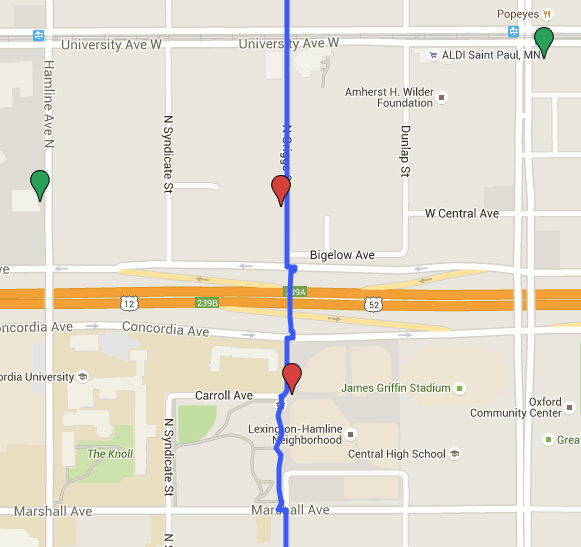 Existing stations in green, the proposed ones in red, and the Griggs bikeway in blue.

2 thoughts on “Nice Ride, the Green Line, and the Griggs Bikeway”