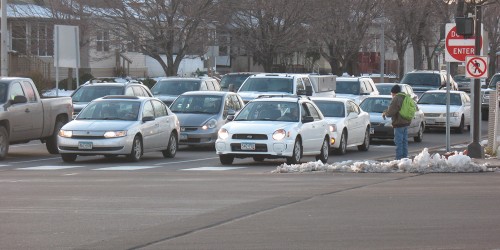 Snelling already had a reputation as one of the most dangerous streets for pedestrians and cyclists in Minnesota. MnDOT compiles “Crash Costs Per Mile” for the top 150 segments of State Trunk Highway, and Snelling had the second and third worst segments on that list. Based on MnDOT’s own data, from 1996 to 2005, one hundred and fifty-five cyclists and pedestrians were hit by cars between Roseville at the north end and Montreal/West 7th at the south end. This resulted in seven fatalities, twenty-two “incapacitating, life-threatening injuries” and costs in excess of twelve million dollars. A lot of this is due to Snelling Avenue’s basic design– four-lanes of high-speed motor vehicle traffic, with turn lanes, and often no medians or pedestrian crossing aids of any kind. There are half-mile stretches where pedestrians have to cross without the benefit of a traffic signal. Between Hewitt Avenue and Como, Snelling is one of the only streets that gives cyclists and pedestrians north-south connectivity across both the BNSF and UP rail lines, but traffic on this stretch moves at up to fifty miles-per-hour and sidewalks are sometimes only five feet wide and in poor condition. Snelling also passes three schools and two colleges whose students are forced to cross it, often at non-signalized intersections.

The organizers presented this data at the February 7th community meeting. They also presented numerous ideas for ways to calm traffic on Snelling and help pedestrians and cyclists cross it and (in places) use it. The two MnDOT engineers at the meeting rejected all these ideas and, to the annoyance of the organizers and the audience, stated that there was nothing they could do to improve the pedestrian environment– that these things were “outside the scope” of the repaving project.

The organizers wrote to Metro District Engineer Scott McBride outlining their desires. These included: improved crosswalks, signage and crossing aids at non-signalized intersections, posted speed reductions (and design changes to encourage those reductions), and protected bike lanes from Hewitt to Como in what is currently un-used shoulder space. When this produced no results, they escallated to the state legislature. State Representative Alice Hausman and State Senator Ellen Anderson organized a meeting with MnDOT engineers at the legislature on March 7 and activists again presented their bicycle and pedestrian safety concerns and ideas to MnDOT. Under the lights of the legislature, engineers acted more receptive and agreed to meet with activists in two subsequent smaller meetings on March 25 and May 9. At these two smaller meetings, however, engineers chipped away or stonewalled most of the activists’ requests. When activists complained to the MnDOT commissioner and legislators, they were repeatedly told (by engineers) that a “Snelling Avenue Multi-Modal Study” was coming and would address all of these issues. As a result, activists gave up and South Snelling was repaved without any of the requested improvements, with the one exception that bike lanes on Montreal (which ended mid-block) were extended four hundred feet east to West 7th Street.

In April of 2012, the long awaited “Snelling Avenue Multi-Modal Transportation Plan” got under way. Task Force participants met in Drew Science Center at Hamline University. They included representatives from Saint Paul Smart Trips, TLC, the Sierra Club, MPIRG, ALRC, SPBC, Lexington-Hamline District Council, Union Park District Council, Saint Paul City Councilperson Russ Stark’s office, Metro Transit, MnDOT, Saint Paul Public Works, Hamline University, the MET Council, Hancock Elementary School, Ramsey County, Midway Chamber of Commerce, nearby trucking companies, and various other groups. The study and plan was led by engineers and planners from the firms SEH and ALTA. The planning study was paid for by a half-million dollar federal grant procured by US Representative Betty McCollum. The planning process was excellent but intense. It featured multiple walk-thrus of different portions of the avenue, bicycle and pedestrian counts and numerous meetings, open houses, and opportunities for wider community input. Many task force participants were employees of non-profits or public agencies and thus at least somewhat compensated. But many participants, like me, were just volunteers. I put at least a hundred hours of my personal time into these meeting, counts, open houses and various follow up activities. All told, thousands of hours went into creating a final plan. By December 18, 2012, a final draft plan was released. A PDF can be downloaded here. It featured detailed recommendations and plan sets, estimated project costs and a partial summary of public and agency comments. The final plan was approved in 2013 to much fanfare, with state legislators and others in attendance. It was an excellent plan and addressed many of the Snelling activists’ original demands.

There was only one problem: When MnDOT repaved and rebuilt portions of Snelling from Dayton to Taylor Avenue in 2015, they simply threw out large portions of the plan. Today, when one compares the plan sets to what MnDOT actually built, one repeatedly sees glaring omissions or random unilateral changes that the agency made to the plans, all of which negatively impact pedestrians and cyclists. I include a few examples below where you can compare what the plan called for and what actually got built. All the cycling portions of the plan were unilaterally thrown out, some perhaps with the blessing of Saint Paul Public Works (but they refuse to confirm this).

The Plan called for shared bike lanes from Selby to Marshall Avenue and then actual on-street lanes from Marshall to Saint Anthony. This was to connect the north end of the proposed city bikeway on Saratoga Street to Marshall Avenue, so riders could continue north to Pascal. A railroad line currently prevents them from getting through so this portion of Snelling was an important link. It was also viewed as a possible link to the Midway shopping area and the soon-to-be-built LRT station. Now it would also be useful for reaching the proposed Major League Soccer stadium. 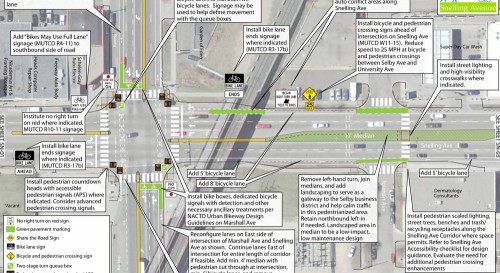 The Facts on the Ground

MnDOT threw out this entire portion of the plan. On-street bike lanes were never installed north of Marshall and the proposed median closing off Iglehart was never built. 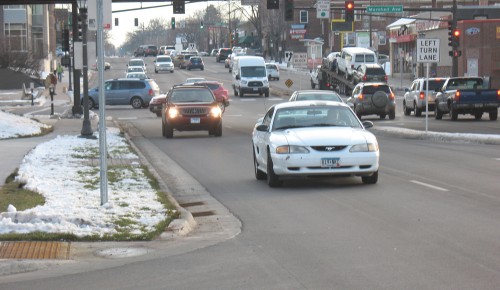 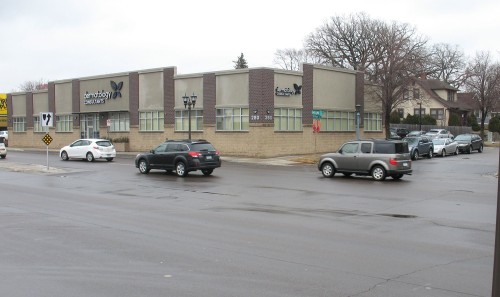 View Looking South on Snelling From I-94

Bike lanes were never put on the bridge over I-94, a bridge that won’t be rebuilt for another fifty years (at least). 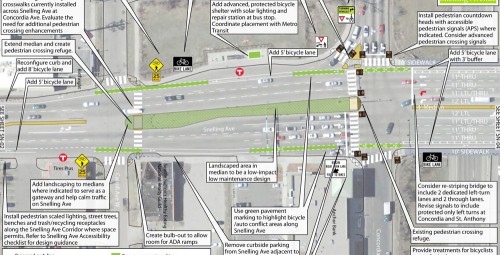 Snelling Avenue Plans Not Implemented Near I-94 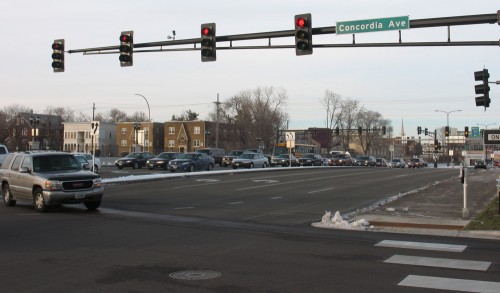 Looking North Along Snelling at I-94

Slip turns called for in the plan were supposed to have tighter radii to discourage speeding and make pedestrian crossings safer, but MnDOT put in regular, high-speed slip turns or light poles in the middle of sidewalks. 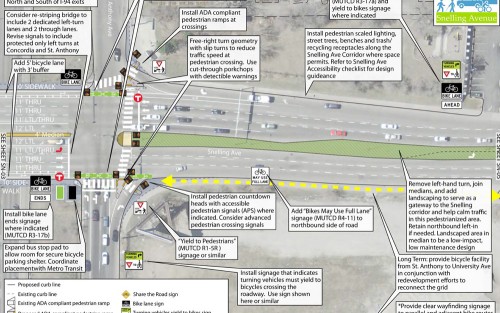 Plans for Snelling North of I-94 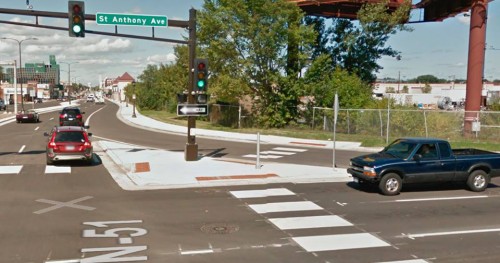 Looking North Along Snelling from I-94

From Hewitt Avenue to Como, there were supposed to be protected bike lanes. To get these around Rapid Bus stations, the plans called for cut-thru paths behind station boarding platforms. MnDOT threw these out as well and never constructed the bike lanes or cut -thrus. 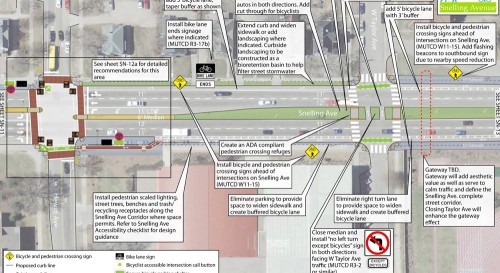 Plans for Snelling at Taylor and Hewitt 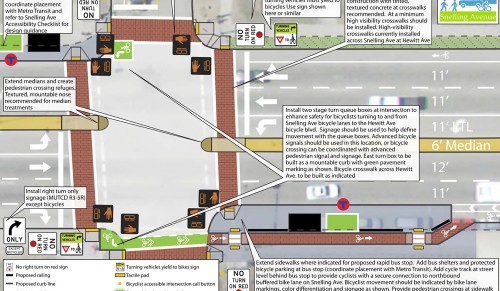 Close-up Plans for Snelling and Hewitt 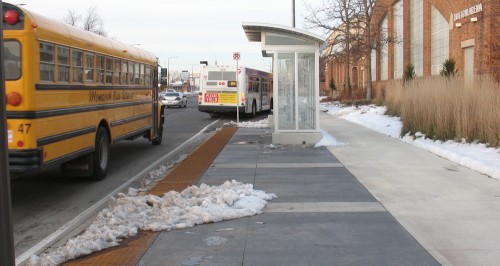 Looking North on Snelling from the NE Corner of Hewitt 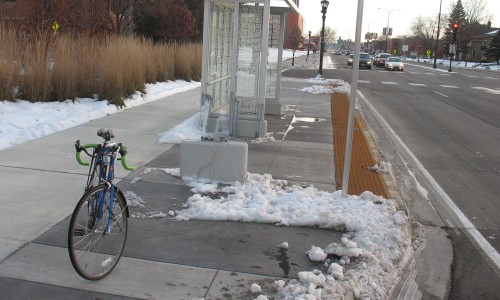 Looking South on Snelling from the Same Rapid Bus Stop.

It goes on and on like this and I urge folks to read the plan, look at the plan sets and compare them to what’s out there.

A plan is a promise from a government agency that it is going to do certain things for the community. I and other community members invested thousands of hours of our time in a good-faith effort to come up with the Multi-Modal Plan. By throwing out large portions of it, MnDOT wasted our time, betrayed our trust, and wasted public money. As they’ve been doing for over seventy years, MnDOT demonstrated that they simply don’t care about public opinion or the communities through which their enormously destructive highways pass. They constantly solicit public feedback for plans like this, or for “Minnesota Go”, or their statewide bike/pedestrian plans. In fact, it seems like their bike/ped division has done nothing for the last twenty years except draft plans that are never implemented. We sit in rooms with facilitators and stick post-it notes on maps, or watch presentations about “how much the agency cares about our input”, and break into meaningless little discussion groups. In retrospect, it all appears to have been a waste of time, and I will never go to a meeting with MnDOT again. It’s like when politicians appoint a “Blue Ribbon Panel” and then ignore its recommendations. After a few of these, people stop participating because they realize it’s pointless.

In my fifteen years of living in Saint Paul, I have rarely seen MnDOT do anything for the city’s bicyclists or pedestrians that the agency wasn’t required to do by state or federal law. Unfortunately for MnDOT, compliance with the law is not the same thing as being “bicycle and pedestrian friendly” or “multi-modal.” MnDOT just had meetings to solicit public feedback for the Smith Avenue High Bridge and may have more. It’s a bridge and roadway that many cyclists use and that cyclists and pedestrians on the Cherokee Avenue Park Trail have to cross. Both ends of the bridge need improvements for pedestrians and cyclists. Maybe someone else went to their meetings and open houses and told them this. Maybe they’ll listen and actually extend bike lanes and improve pedestrian crossings. Until they actually do it, however, I won’t believe a word they say.

(Author’s note: I have meeting minutes, attendee logs, letters and emails documenting all of the above)

49 thoughts on “Why I Will Never Attend Another MnDOT Meeting”