Recently there’s been a lot of controversy about filling in a link in our protected bicycle trail network, the portion of the Minnesota Valley State Trail through the Minnesota River Bottoms in Bloomington. The idea to add a paved trail to the existing dirt mountain bike trail is nothing new, the concept of a trail from Minneapolis to Le Sueur (and later all the way to South Dakota) has existed since 1969. What’s different now is that construction of the controversial segment is imminent. Ann Lenczewski, the (now former) longtime DFL state representative from Bloomington, secured $2.5 million in funding in the 2013-14 legislative session. Plans are to do various engineering and survey work this year, with heavy construction, starting with a bridge over Nine Mile Creek, next year. City Pages recently ran an article, “The High-Priced Paved Trail Bloomington Doesn’t Want” and this has generated a lot of comments on Bloomington-related Facebook Groups, so I thought an article here would be timely.

Is This Really Something “Bloomington Doesn’t Want?”

So far, most of the public input has been overwhelmingly negative. But does this really reflect on what the people as a whole want? It’s been pointed out many times here on streets.mn that public meetings aren’t the best indicator of actual public opinion, whether for new parking meters or a new building. The people that attend public meetings are disproportionately people with lots of free time on their hands and those that are extremely passionate about an issue. So it seems reasonable to believe that hardcore mountain bikers and birdwatchers are naturally going to be over-represented. The mother with 3 kids that would like someplace besides a busy street for herself and her kids to ride their department store bicycles isn’t likely to show up.

Are the 5000 people signing an online petition representative of public opinion? Even assuming all those 5000 people are from Bloomington, which they almost assuredly are not (it seems that, like other controversial proposals, this issue is stirring up environmentalists from all over the state and even the country), that’s only 6% of the city population. Perhaps an unbiased poll of city residents is in order. It’s also worth noting that the Bloomington city government, elected by Bloomington residents, has overwhelmingly supported this.

Similarly the move to organized trash collection has generated vocal opposition, the “Hands Off Our Cans” Facebook group, and even a lawsuit to force the city to accept a petition to put in on a referendum. Other cities have even been scared away by what’s happening. But really, it’s hard to tell, apart from the loudmouths, what the people of Bloomington actually think. If 90% mildly support something and 10% vehemently oppose, the latter viewpoint is going to get the most attention. I personally oppose organized trash collection due to my libertarian political views and because I like my current hauler. But I roll my eyes at the huge stink that’s been created. I have more important things to do than file a lawsuit about who picks up my garbage, or even attend a public meeting about the matter.

The Mountain Bike Trail is not Going Anywhere

By the sensationalist media headlines and the rhetoric of the opponents, you’d think the proposal is to kick them out permanently or to do something like this to the valley: 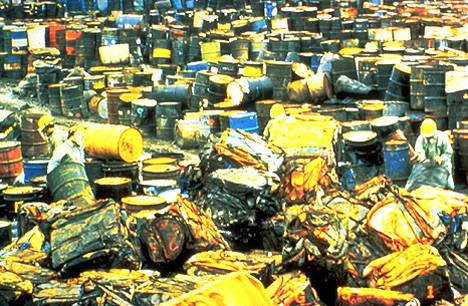 Valley of the Drums

When the reality is that making mountain bikers share this space with the physically handicapped, casual bicyclists and others unable to use a narrow, muddy trail, will look something like this: 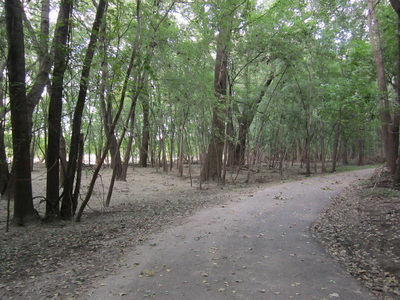 Despite headlines and web sites like “Last Chance to Ride …”, “Save the River Bottoms“, and “Mountain Bikers Fear Loss…“, the fact is the unpaved trail isn’t going anywhere, or at least not far. When building the paved trail they will try to avoid it if possible, but it may be unavoidable having to move it a few dozen yards or so in some locations. Portions where mountain bikers will need to ride on pavement will be kept to an absolute minimum; in most places there’s plenty of room for both trails.

Besides hyperbole, opponents keep focusing on straw-man arguments like maintenance costs. But there’s already quite a few paved trails in areas that flood. One of the premiere off-road trails in the country, the Root River State Trail, floods regularly. So does the Minnehaha Creek Trail.  Even if it is expensive, sometimes nice things cost money. Sure, it’s more expensive than building an off-road trail along a ditch next to a highway, but then again an iPhone costs more than a TracFone for good reason.

Bloomington Does Not Have Enough Protected Bicycling Infrastructure. 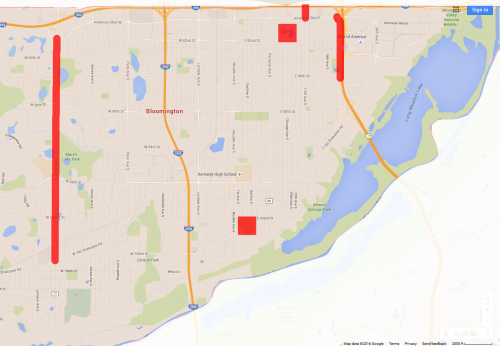 When I want to ride, I do this: load my bicycle in the Jeep (in practice it usually never leaves the back because there’s no protected cycling infrastructure anywhere close to my house), and drive to Lake Harriet or Hyland Park or someplace. And normally when I want to go out is right in the middle of rush hour traffic after I’m done with work.  Is this what we expect the residents of East Bloomington to do? Imagine if Minneapolis had decided a couple of trails along busy streets was enough and left the Grand Rounds trails as bare dirt! 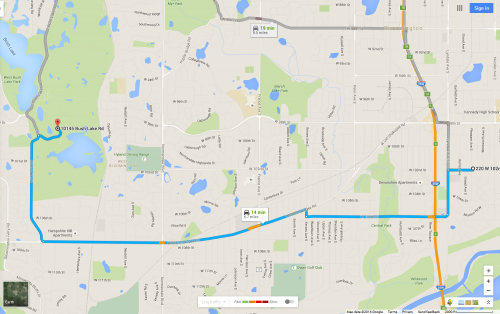 Even if Bloomington Actually Does Oppose This, it Might not Matter

As evidenced by its name, the Minnesota Valley State Trail, this is more than just a city issue. We’re all part of society, and sometimes cities need to accept something that while not their preference, may be good for the region as a whole. See the suburban interests getting the urban freeways built, or urban interests wanting the suburbs to build more affordable housing. As you can see by the map, this is a huge, glaring gap in the regional (and state) paved trail network, not just an issue with a more local park. In fact, what delayed the reconstruction of the Old Cedar Bridge for so long is Bloomington’s insistence that the river bottoms are a regional amenity, and therefore should be paid for by the region. 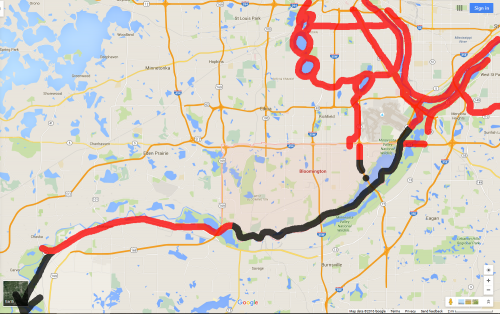 There will still be a gap in Nokomis-Minnesota River Regional Trail, as bicyclists will still have to ride on the same road as motor vehicles between the Minnesota River Trail and Cedar Ave crossing and Old Shakopee Rd, as an off-road trail is not being included on that stretch of Old Cedar Ave – instead there will be an unprotected bicycle lane going uphill and sharrows going downhill. This is unfortunate, but it’s really a side issue to the major gap that the paved Minnesota River Trail will address.

Opponents have not suggested a realistic alternative routing. Old Shakopee Road will need to be rebuilt sometime, and while protected bicycle infrastructure like a multi-use path or cycletracks would be nice, a State Trail isn’t intended to run along city streets for significant distances. Similarly, running something along Highway 13 would hardly be worthy of a statewide amenity. An alternate routing directly along the south side of the river would be possible east of I-35W, but west of 35W is a maze of barge terminals, quarries, and toxic waste contaminated landfills. Especially with the Old Cedar Bridge finally being restored on the east end, the new bicycle crossing at County 101 on the west end, and the soon to be built bicycle crossing at I-35W, this will ultimately be a network that is so much more than the sum of its parts, attracting riders from all over the metro.

Although deserving of it’s own post, in closing I thought I’d mention what’s going on with the Old Cedar Bridge. It’s a completely separate project, just coincidentally happening about the same time, in the same area, and will be part of the same network.  Basically the impasse for the past several decades has been that the city of Bloomington claimed they did not have money to fix it, that the burden shouldn’t be solely on the city to fix it, and that if they were going to fix it, then it should be in a manner that kept future maintenance costs to the minimum. But the original plan for a causeway was vetoed by the federal government, then the old bridge was designated historic, ending proposals to replace it with a modern structure.

Finally, Bloomington got a significant amount of state money to fix it, now totaling $14.3 Million from various sources over the years (more than double the cost of what a replacement would cost and likely with higher future maintenance costs). It turns out the foundation and trusses are in pretty good shape, but the deck and piers are trashed. So the trusses are being jacked up and hung from shoring towers while new piers are built on the existing foundations. A new deck will be made using modern standards and will be much lighter as it only needs to support bicyclists, pedestrians, and the occasional maintenance or emergency vehicle. This has necessitated the construction of a temporary bridge and bringing in three cranes. The trailhead is getting cleaned up and is getting a modern restroom building. 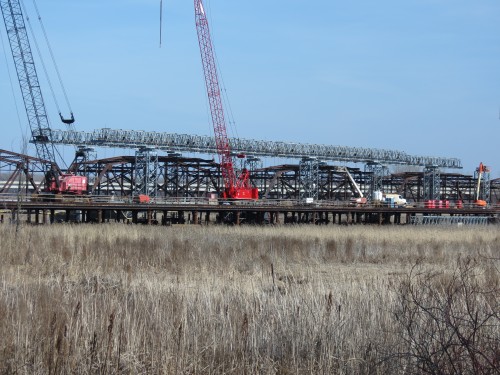 In closing, I’ll say this about the unpaved trail: I’ve tried to ride it a couple of times on my $100 department store mountain bike. But after a couple of miles, I was dissuaded by the mud, brush (is that poison ivy or a stinging nettle you’re heading straight toward?) and debris. I couldn’t even begin to start  feeling safe or comfortable. I’ve been on foot a few times too, and I still feel I’d enjoy it more walking on a paved trail. Presumably, a lot of other Bloomington (and regional) residents are in favor of this, so it’s time for them to speak up and be heard too. 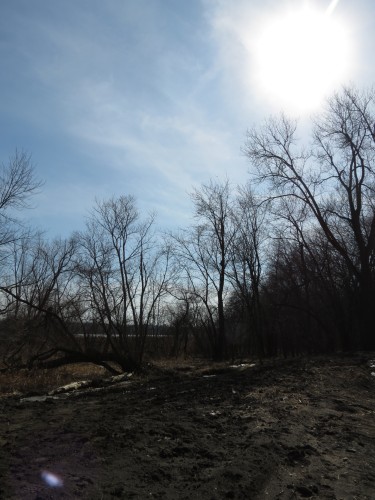