This is why I hate historic preservation:

…the Minneapolis Heritage Preservation Commission on Tuesday voted in favor of allowing a developer to demolish two buildings but denied a request to build a 40-story condo tower across the Mississippi River from downtown.

Okay, hate is too strong of a word. I don’t hate it. I just think it’s often misapplied, and this is a good example of how. But that’s still an insane sentence. Read it again.

This was a vote to preserve literally nothing. Literally. They are fine with tearing down the buildings. It’s the nothing that’s left afterward that must be preserved. That’s insane.

What’s even more insane is that it’s probably the correct decision, given how this process works. This site is within a designated historic district. The guidelines for this district – no doubt written in the misty past by the wisest of sages – say that you can’t have buildings taller than 8 stories in this area (see Sec. 10.7). So that’s it. Case closed. But why? Maybe the Strib knows:

The decision comes at a time of heightened concerns about how development is affecting a part of the city that is dominated by turn-of-the-century houses and storefronts, and a handful of high-rise condo and apartment buildings built in the 1980s.

Let’s leave aside that I’m really not sure where the nearest turn-of-the-century house is (you can’t count the the 1847 Ard Godfrey House in the park next door), there are some older store fronts a few blocks away. They’re lovely and wonderful and they definitely should be preserved!

But they aren’t adjacent to this property. Right next door is a parking ramp. Across the street is one of those existing high-rise buildings (condos, not apartments). Across the other street are rows of townhouses built in the 1990s. A half block away is decade-old condo building and grocery store. 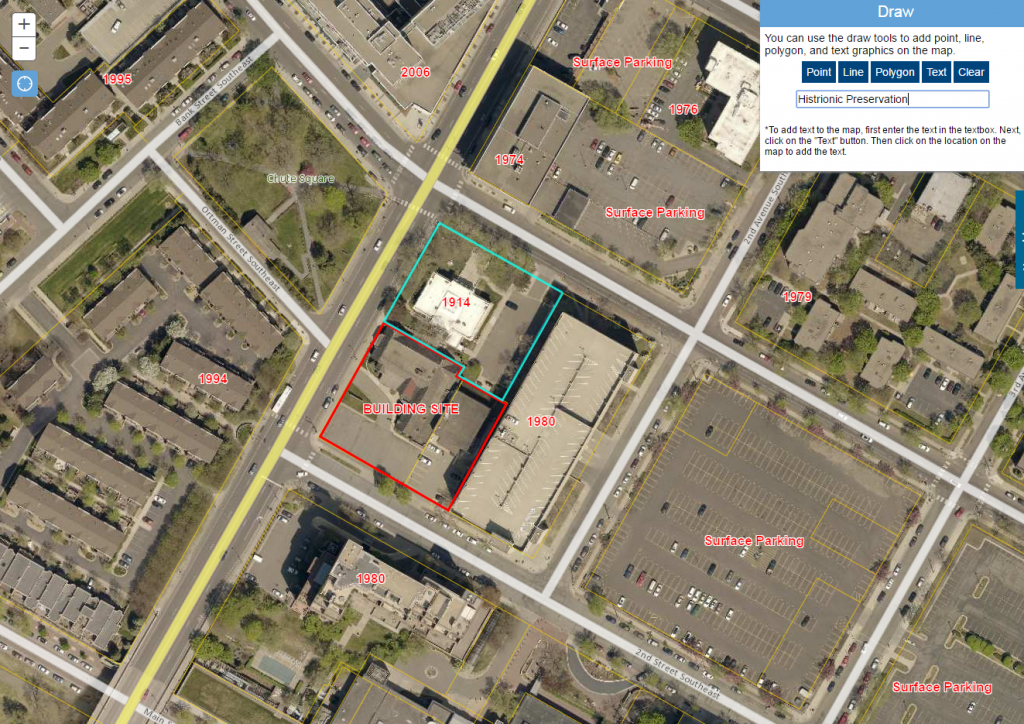 [Click to enlarge] Building ages surrounding proposed tower site. Only the adjacent Pillsbury Library building (1914) dates from the historic period of significance. Everything else is much newer…or nothing

In short, once the buildings on this site, whose demolition has been approved, are gone there is very little in the immediate area that shares the characteristics that are supposed to make up this historic area. If it ever existed on this parcel, it’s already gone. But apparently we must preserve its memory, because historic district.

So what happens now? Well, one option is for the developers to scale this project back, meaning fewer people can live here, fewer built-in customers for area businesses, marginally more expensive housing in the area, and less property tax revenue for the city, etc. Yay! A victory for preservation!

Or the developers will quickly file an appeal of the HPC decision and the city allows them to build it anyway. Let’s hope for that.

44 thoughts on “Preserving Nothing at 200 Central Avenue”