A few years ago, like many other young Americans, I ventured to Europe for a study abroad experience. In my case, I spent half a year in the city of York, England. What I saw in York thrilled me: a city that was actually a place for people rather than cars. What an idea! I entered York a student and left an urbanist. This spring, I returned to Britain on a solo vacation through England and Scotland. As I made my way by train from Edinburgh to London, I made sure to work in a short stop to revisit York. 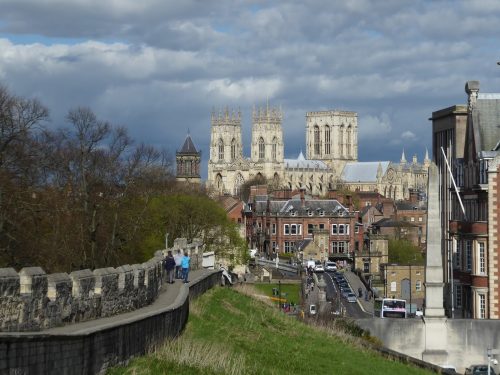 Like most old European cities, York evolved on a walkable human scale centuries before the automobile. First settled by the Romans, the city center dates largely from the 16th to 18th centuries with the old city wall and gates still intact. York is unique in the completeness of its old city center and medieval walls. A key reason for this is that York did not industrialize in the 19th century as many other northern English cities such as Leeds or Hull, nor was it heavily bombed during WWII. This left York with centuries-old character without yielding to major industrial development or having to rebuild from destruction.

York has remained a relatively small-ish city and with a population of about 200,000. The local economy centers on the insurance industry, railroad services, and the University of York (with over 20,000 students). On a more delicious note, York has a historical reputation as the candy capital of England (being the birthplace of a certain candy bar called a Kit Kat.)

York is a classic cathedral city with the enormous and beautiful York Minster dominating the skyline of the old city center. Located at the confluence of the River Ouse (pronounced like “ooze”) and River Foss, the riverfront is walkable with a lengthy promenade on the eastern bank with outdoor seating for restaurants and pubs (I’ve heard it said that York has 365 pubs so that one could drink at a different pub each day for a year). The city center is pedestrianized with space only for buses and delivery vehicles. The center of this pedestrianized area is Parliament Street (also called “Pavement”) where outdoor markets operate as best they can in England’s fickle weather. 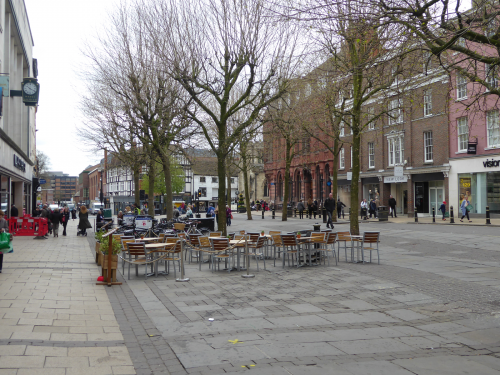 Although York draws its share of tourists in the spring and summer months, the city’s urbanism and charm is not solely a nod to tourists. York is appealing as a place to be because the city is authentic to its heritage and culture, not because it tries to be a tourist attraction. Even among British cities, I felt that York stands out for its authenticity. In my experience, only a few other UK cities such as Lincoln, Bath, and Cambridge, come close to being comparable.

Within York, the mobility culture defaults to a hierarchy where walking, biking, and transit come first while cars come afterward. While a student, I interned for the City of York at their head offices. One of my favorite observations to share back here in the States is about how the city office building I worked in had 1,200 employees and zero employee parking. Employees relied entirely on non-automobile options to commute. The building had a bicycle “garage” for employees with space for 250 bikes, along with lockers and shower facilities for those biking to work. People-oriented mobility is simply the default mindset. Just imagine that in the Twin Cities! 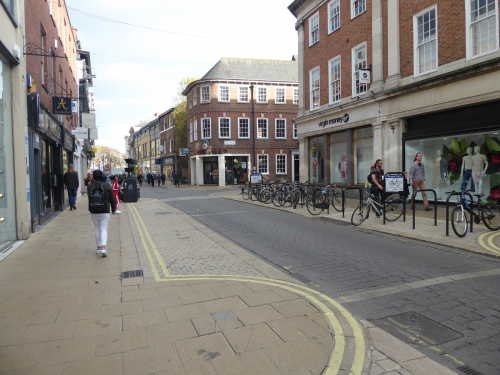 Typical York street that prioritizes people. Note the pedestrian bump-out on a street that is already one lane. Photo by Ben Surma

York has a rather user-friendly bus network covering not just the city center and university, but also serving the surrounding countryside with additional intercity services connecting to the broader Yorkshire region. I was thrilled to discover that I could ride a bus out into the countryside to access a trailhead or a national park and be able to rely on a bus to get back.

There are areas of York outside the city walls that feature more suburban-style development with box supermarkets and petrol stations, but not on the scale one would assume in a similar-sized American city. Even these more auto-oriented districts have clearly marked sidewalks and crosswalks. No stroads here. The street space allocated to cars is only what is strictly necessary (so no 12’ lanes or clear zones). Density in York seems much greater than we would typically see in similar-sized American city. Mixed-use is both the norm and the expectation because the default unit of emphasis is the person, not the car. I would go even further to note that there doesn’t exist the type of convenience culture in Europe that we see manifested in American-style auto-oriented development where drive-throughs are an inalienable right. 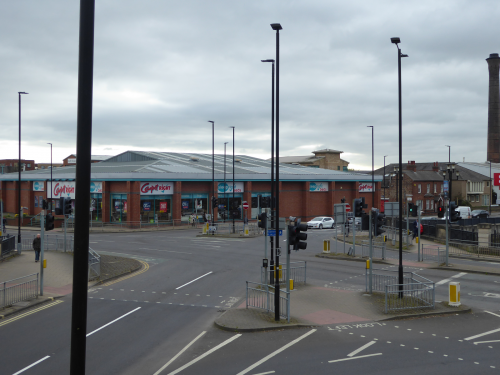 I grew up in rural Minnesota surrounded by pine trees and cornfields. Cities were nowhere on my mind. When I came to the Twin Cities for college, I sensed the energy of the urban environment that results from a diverse array of people who cluster in the city to seek opportunity and to share ideas. Underlying this function is an urban form. Like a liquid filling the form of its container, citizens fill a city to fit the form. York showed me that a city could be a completely different form from what most Americans assume is the norm. Although I’ve now spent time cities in multiple countries across continents, York continues to stand out as an example of a city that is true to its heritage as well as to the essential purpose of a city: to be a place for people.

5 thoughts on “The City That Made Me an Urbanist”