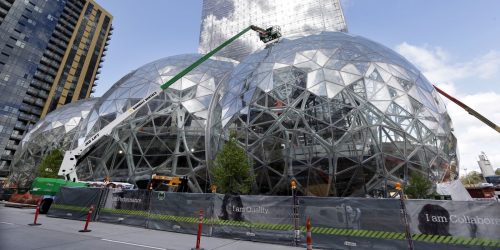 By now you’ve all seen the news about the amazing Amazon HQ. 50,000 high-paying jobs landing in some North American city is basically the mega-fantasy of every economic-development-person slash tax-base-loving-politician in the country.

And the Twin Cities is among them. Cue the Amazon takes: Governor Dayton, cautiously optimistic; Chris Coleman, running for governor, releasing a press release the next day; Pioneer Press grouch Joe Soucheray crawling out of his garage to weigh in on how Amazon will save Saint Paul; even the anti-Ford Site people tweeted about how a potential Amazon HQ was somehow a vast improvement over the current plans. (That one is a head-scratcher.)

Here’s my take. First, the proverbial tech HQ is an amazing PR coup for Amazon itself. Whoever thought of it is an evil genius and deserves a promotion. This is exactly the kind of media frenzy that crafty tech bros should be dreaming up.

Second, this kind of thing is the classic example of a deus ex machina economic development strategy, where some sort of massive player emerges from outside one’s urban world to swoop in and save the day. This is what every old-school economic development strategy calls for, and has been calling for ever since factories began closing in the Midwest. In the past, these kinds of big company relocations would have been industrial factories, like the hugely subsidized Foxconn thing that Paul Ryan got so excited about in Wisconsin a while back, or the Nissan plant in Mississippi that I saw on my way down to New Orleans. (Update: there’s a huge unionization effort underway.)

You can’t even take a picture of the Shakopee Amazon distribution center, it’s so large.

But these days, factories are no longer the holy grail, tech jobs are. And there’s one important thing that a lot of these old-school diehards like Soucheray seem to forget about the Amazon “contest”.

As a company, Amazon splits very neatly into two schools of urban design. On one hand, they located almost all of their menial warehouse jobs at the very far edge of urban areas, like their massive new building out in Shakopee. This is a pattern all across the country: for logistical work, Amazon builds on the distant edges of metro areas. 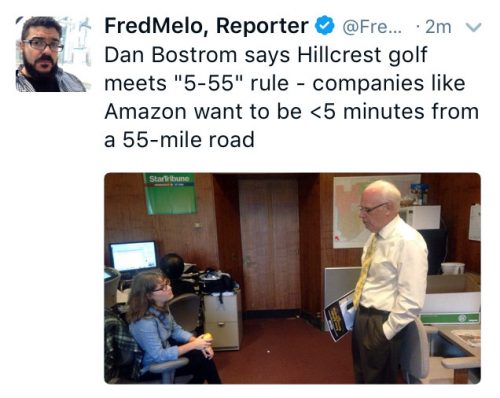 I think this is getting it backwards.

On the other hand, and this is hugely important, for high-paying high-skill work, Amazon really values walkable and transit-oriented urbanism.

I did a podcast interview a while back with Spencer Cox, a PhD candidate who has spent years researching (and working at!) Amazon. He has been studying precisely this pattern of employment and bifurcated urban environments.

Here’s a key quote from our conversation:

There are two big trends that Amazon is right at the heart of, the first one is suburbanization of poverty in the US, as well as the suburbanization of low wage work. If you think about Amazon’s expansion into exurban locations, it’s also in a whole set of clusters of really low wage warehousing assembly jobs that are low-wage, low-skill jobs that still very central to our economy. These are increasingly being located, not in our urban cores, but in exurban locations.

There’s also been a trend in the suburbanization of low-income individuals instead of in the urban cores. And since the financial crisis, what’s happening in urban cores, if we look at Seattle and think about where Amazon is located, it’s really interesting. There’s been a weird inversion in the last 10 years, where all of a sudden, [we have] the idea that propinquity and face-to-face communication somehow is innovative and develops new ideas. When Jeff Bezos decided to locate his corporate campus, he didn’t locate in the suburbs, he put it in downtown Seattle. And he said he built it in downtown Seattle because he wanted to build it close to where millennials want to live but also wanted to put it somewhere that would produce innovative new ideas. Seattle all of a sudden has a huge movement of not just Amazon, but you have Salesforce, Facebook, Google, Twitter, urban forestry… a huge relocation of corporate campuses into downtown hubs. They’re reproducing the city in an interesting way, and Minneapolis is starting to see this trend.

The point is that, if Twin Cities political leaders, economic development folks, and talk radio curmudgeons are serious about attracting companies like Amazon, as a society and as a metro we need to actually support better urbanism. So far, we aren’t doing well enough on that front.

Here are three examples of ways our region would have to improve if it wanted the attention and tax-base of a company like Amazon. 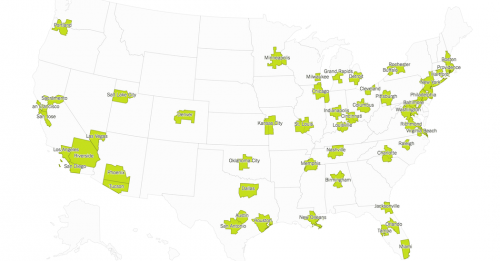 Twin Cities were eliminated right away.

There’s are probably a few reasons why “Denver” and not “Minneapolis” was the New York Times answer to the question of “where should Amazon locate?” But one big one is that Denver has actually supported transit as a regional transportation solution. They passed a massive city-wide investment in a light rail system.

Meanwhile, in Minnesota the supposedly pro-business GOP is actively trying to undermine new transit projects. See the recent MPR story about how a Republican governor could derail the SWLRT, Scott Walker style… To make matters worse, the GOP and the Center for the American Experiment (its pretty-much-in-house “think tank) are peddling Randall O’Toole falsehoods about traffic congestion, using driver frustration as a cudgel to try and take down the Met Council, one of the Twin Cities only unique advantages when it comes to competing with other US metro areas.

If the Twin Cities really wanted to attract a company like Amazon, you’d have more consensus on basic governance and sustainable transportation investment. The supposedly pro-business GOP would stop misleading people about where economic growth is coming from in Minnesota in order to score some cheap, and ultimately self-destructive, political points. 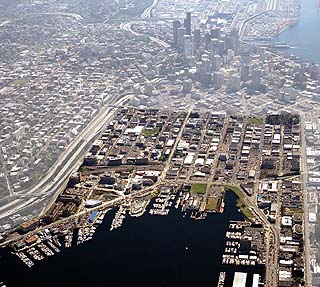 Contrary to what Joel Kotkin and Wendell Cox would have you believe, high-wage 21st century employers like Amazon put great value on walkable urban spaces. That’s why Amazon’s current headquarters is in Seattle’s South Lake Union neighborhood, one of the most walkable, transit-connected parts of a city similar in many ways to Minneapolis/Saint Paul. This is the kind of urban space that dot.com companies value, pretty much the opposite of the 50s-era suburban office park.

To be sure, Minneapolis and Saint Paul have made great strides over the years in creating walkable, bikeable, connected urban neighborhoods. But there are still far too many of our streets that are potentially walkable, yet undermined by dangerous high-speed urban roads. Often these are county or state roads, where city concerns like safety or local businesses are undermined in the name of regional traffic flow.

Meanwhile, key efforts to create walkable bikeable downtowns are left by the wayside. See Hennepin County’s recent nixing of the proposed extension of the Washington Avenue curb-protected bike lane, for example. Or the lack of funding for the completion of the downtown Saint Paul curb-separated bikeway. These are the kinds of projects that the Twin Cities should be building if they want to attract a major dot.com employer.

Meanwhile, we have a former business columnist in the Star Tribune giving ink to angry people stuck in traffic, saying ridiculous things about bike lanes and street safety. It’s embarrassing, and not the kind of thing we need if we’re serious about an Amazon-type deal. 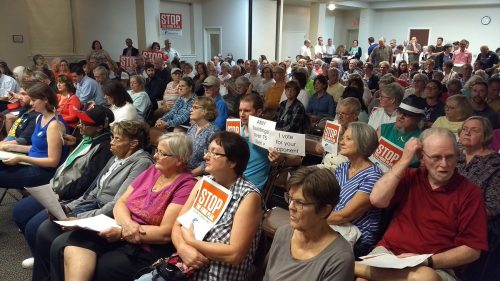 “50,000 workers” seems like a massive overestimate to me, but it suffices to say that any big new company moving to the Twin Cities would create the need for lots of new housing. One of our region’s greatest assets is that, for a long time, housing here has been relatively affordable. The Twin Cities has long been recognized as a place where many young people could afford to buy a home.

But we have a housing crisis now and that old truism is changing. If the Twin Cities is actually serious about attracting an major 21st century employer like Amazon, we need to be building a lot more housing than we are today. The fact that efforts like the Ford site, upzoning in Minneapolis, or affordable housing in the suburbs, are receiving such negative pushback is a sign that the Twin Cities is not serious about solving its housing shortage. If we actually did get a big fancy new company headquarters, we’d need a lot more leadership from cities around the metro when it comes to building new housing.

In Conclusion, I am Skeptical

Maybe it’s the fact that Amazon.com began as a business that undermined local bookstores, but personally, I think trying to seduce an “angel investor” company is the wrong approach for the Twin Cities. We should be trying to grow and improve our local economies and local businesses first. We should be doing all the things I listed above because they improve our quality of life, public health, access to equitable housing, and our local economies.

Given the lack of political consensus in these three core areas, I doubt there is any way Amazon will come to Minneapolis/Saint Paul. And after all, two of their main competitors, Target and Best Buy, are based here. Plus Seattle is a relatively similar city already.

On top of that, the specifics of the Amazon contest leave me with a bad feeling in my stomach. Regions pitting subsidies against each other in a race to the bottom is what Minnesota has tried, somewhat successfully, to avoid for decades! See also Chuck Marohn’s take-down of this kind of economic approach, and his list of cities that might make “bids” for Bezos… I’m skeptical!

But the point remains the same. Right now, the toxic politics around urbanism suggest that Minneapolis and Saint Paul are not serious contenders for growing and competitive 21st century companies like Amazon.

But if we somehow improve our priorities and begin creating a city with great transit, lots of affordable housing, and safe welcoming streets, I believe cutting-edge companies will flock to the Twin Cites. They won’t come for tax breaks, but simply because these are excellent places to live, full of people care about and value our urban spaces.